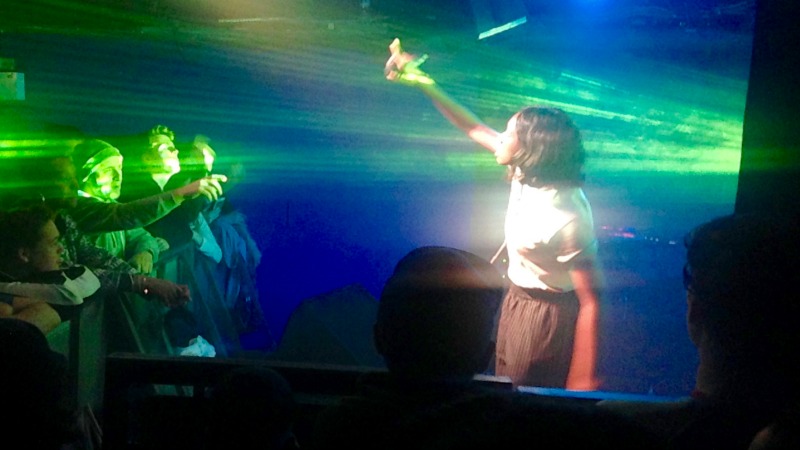 Little Simz has been one to watch for a while, but she doesn’t shout about it.

At this stage if you know about her, you know – but if you don’t there’s a chance you won’t find out until she’s dominating the charts. That’s how the Bristol leg of her tour felt. This artist has just come off a world tour where a majority of the shows were sold out – the Americans love her – and yet I was surprised to hear that Little Simz was performing in the top room.

She’d obviously been put on in a smaller space to accommodate the number of people who had brought tickets. There are some artists who would let this affect their performance – not Simz.

A fearless flow is the only constant in her tunes, with almost every beat switching up after each 16. The constant changes leave you expectant, excited, never sure which genre is coming next. There were a couple of times I thought the bass drowned her out which was a shame because her words are fierce. When she dropped Devour I was so surprised by the dirty drop that I audibly laughed in delight. Hearing Jackwob production on serious speakers is always madness.

It’s easy to forget that Little Simz is 21 years old. She’s touring the world with her friends, doing what she loves on her own terms and she’s still a young ‘un. When she said “follow your dreams, you can do anything” you kind of had to believe her, considering all she’s accomplished.

Her words capture the world she has come from and the music takes you on a journey with her. London seeps out through strong messages of unapologetic pride in her achievements and ironclad confidence; in her ideas, talent and style. Gratitude from her touring album A Curious Tale of Trials + Personse encapsulates what I like about Little Simz. Starting off with afrobeat-style percussion and chanting, before dropping into vocals and guitar, she talks to us of her past, present & future:

“I came to show there’s more, I’m expanding
Still on my lonesome
Give a fuck, I’m chosen
Bit of luck and a wish, maybe we’ll get there
But for now, I’m zoning
Somewhere in the air, I’m floating
They will not control us
This the type of shit that ain’t never gonna sell
Man, you shouldn’t have told us that.”

Nearing the end of her set I was concerned she wouldn’t perform my favourite track (it’s not as grimy as the rest) but as soon as I heard the familiar strings loop I knew it was time. Marilyn Monroe is the song that solidified my Simz fandom. Effortlessly classic, the black and white video shows Little Simz in a shop with her people. She brought that same vibe to the O2 when Remus came out for his verse.

Little Simz is an artist who isn’t afraid to be different and who has, somewhat seamlessly, risen to the forefront of a new sound wave. Join her.