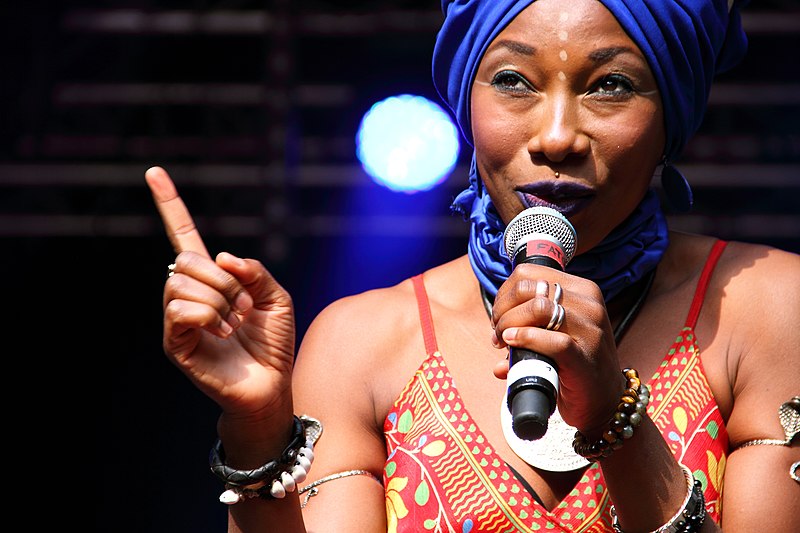 Fatoumata Diawara is a striking presence, prowling the stage at Fiddlers in the vibrant yellows and blues of her African stage dress.  She is inhabiting her version of the African American spiritual Sinnerman, best known from Nina Simone’s extraordinary version. As she navigates the tale of a sinner attempting to hide from divine justice, she seems to submit herself to the passion of the song, lost in her music, her limbs flailing, and tearing off her headdress to let her cowrie-shelled dreadlocks fly. The packed crowd whoop their appreciation and move with the incessant groove of the tune. It is a dramatic highpoint of a remarkable performance.

Diawara arrives in town on the back of her new album Fenfo – her first solely under her own name in seven years. Since her well-received debut album, which you may well have heard in a hip coffee shop near you, earned her the title ‘the songbird of Mali’ she has jumped on Damon Albarn’s Africa Express train and recorded an album of duets with Cuban pianist Roberto Fonseca.

‘Fenfo’ translates as ‘something to say’. Her songs, sung in her native Wassoulou with smatterings of French and English, are a call to arms for a more positive western view of Africa, environmentalism and female empowerment. In a world of increasingly bland pop stars, she provides a dramatic and aware contrast.

She is a charismatic front person leading her well-drilled band, drenched in the heritage of the music of her homeland whilst skipping between afrobeat, funk, jazz, blues and the tropes of western rock and pop. Her voice, at the forefront of the music tonight, is capable of a low blues growl and swooping highs, all delivered with an unusual husky, smoky tone marked by idiosyncratic ticks and whoops. She is a remarkable vocalist.

Their well-paced set begins with the gentle mood of the Malian blues of Timbuktu and the mid-paced Ou Y’an Ye. It is after the drama of Sinnerman that they find their up-tempo groove with the guitar-driven Nterini and afropop hook of Bonya, as catchy as a Motown classic, leading the packed Fiddlers crowd in a celebratory response. Their set ends with a hard funk run through of Stevie Wonder’s Higher Ground and a finale of Salimata with the audience joining the band on stage for a joyous response to this wonderful show.

What we didn’t hear tonight was some of the gentler Kora and cello settings, beautifully provided on record by Toumani Diabate and Vincent Segal, to represent the full sweep of her repertoire. This was a dance gig and she more than delivered on that, leaving the crowd ecstatic and yelling for more.

She is a class act with real depth and potential for enormous crossover appeal that could tempt punters who haven’t been anywhere near it since buying that Gypsy Kings CD in the 80s back to the world music scene. She lit up an ex-prison in Bedminster on a cold and rainy November evening and I left dreaming of how this joyful, passionate music with a message would sound on a festival stage on a beautiful balmy summer’s evening.

The evening opened with a set from Belgian/Congolese songwriter Teme Tan. He too has crossover appeal. He is an engaging figure and has early arrivals moving to his beat-driven afro-pop, coloured by occasional guitar and melodic singing and rapping. His modern pop/soul sound not far from Christine and the Queens with an afro sensibility. Nothing wrong with that.