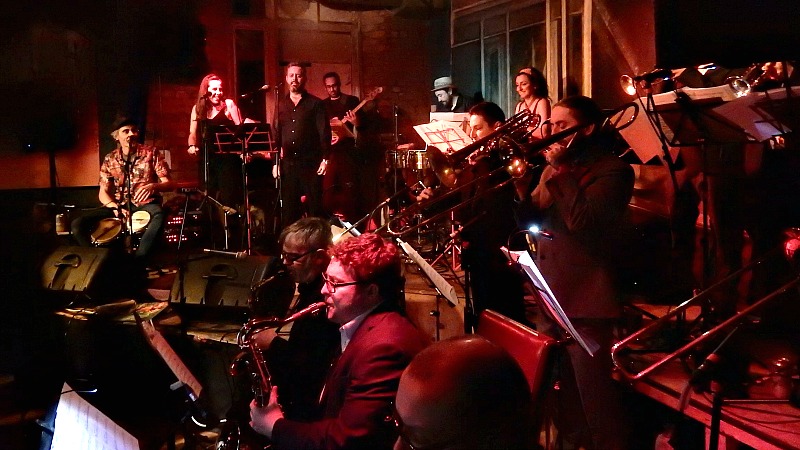 If there was ever any question that Bristol needed a Latin dance big band this sold-out debut gig should have answered it.  By drawing together many familiar faces from outfits like Baila la Cumbia, Conjunto Gringo and K’Chevere trumpeter Joe Longridge’s 17-strong ensemble reflected a solid grounding in the music of Cuba and Columbia, not least in the inclusion of Havana-born trumpeter Michel Padron and Columbian vocalist Elpidio Alegria. Both would make strong contributions but it was the impact of the ensemble sound that generated an authentic electricity throughout the evening.

Joe Longridge has been organising small Latin jam sessions – descargas – around Bristol for a few years now but while that no doubt helped him pick his team for this big band it can’t have prepared him for the work of getting it together. They played a mix of commercial charts and arrangements from Joe and fellow trumpeter Andy Hague, himself a big band leader. The music covered a range of moods from swooning swing-style saxophones to stabbing and shrieking Cuban horn play, the rhythms switching between salsa, cumbia and a few cha-cha tunes. The band did well to keep it tight through the stops and starts of one of the latter, Pa Gozar,  grins flashing between them as they kicked back in each time.

There was no doubt that the vocal numbers upped the audience enjoyment each time, partly thanks to Elpidio’s smooth-talking showmanship (“Hey – this is happy music! The happiness comes free …”) but mainly due to the vigorous exchanges between the man and his two cohorts Guy Calhoun and Marta Zubieta. The trio’s freedom to move added an eye-catching element to the stage, as did the impeccable percussion section of Ivan Moreno, Lisa Cherian and Myke Vince.

Everybody got a chance to shine, as is the way with such gigs, but standout moments included Kevin Figes one flute solo, a couple of soaring trumpet breaks from Michel Padron and Jim Blomfield’s finally unhinged montuno piano, disciplined throughout until the descarga-celebrating encore let rip against an explosion of big brass blasting. Joe Longridge’s only solo was splendidly crafted by a player who knows and loves this music.

Projects like this are incredibly difficult to pull together, especially when they include so many in-demand players, but the end result in this impressive debut gig strongly justified Joe’s vision and the audience response surely validated its success. Hopefully the Dockside Latin Orchestra will find more and bigger stages to play.