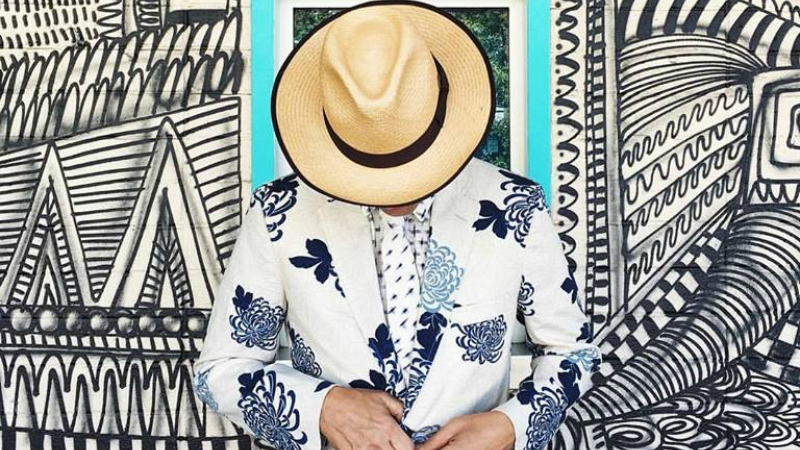 So how was Chuck Prophet, how was the show, how were his band The Mission Express? Well sonically they were blindingly good, delivering a two hour set of muscular bluesy Americana leavened with delightful harmonies and outstanding guitar work all built on a funky rhythmic groove. The material was excellent, Prophet & Co have an enviable back catalogue to draw from, packed with some of the finest songs laid to wax over the past few decades.  Prophet was the consummate front man, an easy demeanour, wicked spiky sense of humour and the band were totally at ease with one another – locked in the pocket and enjoying the set. But visually? That’s another matter because the Tunnels (busy as always) was rammed to the rafters and presumably there had been a discount for tall folk as the lofty demographic was well represented and every one of the lanky buggers was packed in at the front. So visuals were limited but there was a hell of an atmosphere throughout the room: a rambunctious crowd exchanged banter with the band, sang along – whether prompted or not – and spurred the band on during both new material and old favourites.

The band opened the set with the title track from the latest long player Bobby Fuller Died for Your Sins and although the tune is still pretty fresh it was greeted like an old favourite by the crowd. (Trivia Corner: anyone able to connect Prophet to the Clash via Bobby Fuller? Answer at the end of the review). The nod to rock history continued with a lively cover of Chuck Berry’s Ramona Say Yes delivered with swing and sass whilst Lonely Desolation completed the opening triple whammy.  Prophet then addressed the crowd formally, acknowledging his pleasure at being back in town, “…Bristol’s a guitar town…” and claimed to have seen the Blue Aeroplanes play a show with more guitar players on stage than the crowd before him, not beyond the realms of probability eh? Getting serious he then prefaced the next tune with a reference to the preponderance of celebrity deaths in 2016 and recent changes in the political landscape, suggesting that the world was losing its fundamental sense of decency particularly amongst those at the top. Although from the new LP, Bad Year for Rock n Roll has fast become a crowd pleasing anthem and the crowd drowned out the band during the chorus and lifted a blistering rendition into an early-set tour de force.

The set then seemed to rush by, Temple Beautiful an engagingly raucous call and response; Alex Nieto a moving, stirring description of (yet another) shameful American death – beautifully illustrating Prophet’s ability to craft contemporary protest songs; Barely Exist introduced with a tale of a recent German show at which Prophet was asked “We tore down our wall, why do you want to start building walls?”, said tale generating ironic cheers. There was considerable skill on display with the selection of songs too – Jesus Was a Social Drinker and Ford Econoline (apparently the second best thing to come out of Detroit – after The Stooges) both introduced levity amongst the more serious topics giving the show lyrical light and shade.

You Did (Bomp Shooby Dooby Bomp) was introduced as the “…the heaviest thing you’ve ever heard…” (clearly the words of a man unfamiliar with the Temples Festival, RIP), however, the tune did indeed bring the heaviness as its riff ate up the room whilst the crowd once again took the vocals from the off. As they also did with Summertime Thing, which somehow managed to conjure up balmy evenings and languid sun drenched days despite the grey dampness the other side of the venue doors. Although the focus of the show, Prophet and his songs were beautifully served by the Mission Express: Stephanie Finch supplied sympathetic backing vox with delightful organ, piano & synth throughout but shone on In the Mausoleum (for Alan Vega), a booming reverb drenched tribute to another fallen hero. The rhythm section (Kevin White, bass guitar and Vicente Rodriguez drums, vocals) were the bedrock for the songs – White maintaining the tempo with metronomic precision, locked into the groove with Rodriguez as they offered a danceable counterpoint to the weight of the guitars. James DePrato traded lead & rhythm with Prophet throughout the night, both more than capable lead players and their duelling encompassed the melodic interplay of Lizzy with the heft of Skynyrd in their prime.

There was more amusement with the introduction to We Got Up and Played, as Hull got a slagging when Prophet endeavoured to find a comparison for a town as boring as Cleveland, birthplace of the song.  That song pretty much summed up the whole ethos of the Mission Express, describing life as a working band a galaxy away from the stadium filling super groups. Cohen’s Iodine was the final tribute to a much missed icon, with Finch leaving the keys for the co-vocal on a lovely, moving cover. After closing the set with a massive Willie Mays is Up at Bat the crowd were howling for more before the band had left the stage, ensuring the encore was never in doubt. Once again Bobby Fuller was with us in spirit with a pounding cover of Let Her Dance before the final tune You And Me Baby (Holding On) ended the  set with yet more guitar weaving as Prophet and DePrato went toe-to-toe (or rather headstock-to-headstock) one final time. Tonight reminded us once again that there are dozens of talented artists to be seen in decent venues for less than a price of a Beyoncé beanie, and that two hours of quality songs, & banter delivered by time served musicians can lift the spirts as we all find ways to cope with a world that seems more like a Spitting Image episode than ever before.

Trivia corner answer: The Clash recorded Bobby Fuller’s I Fought the Law and meanwhile Prophet has on several occasion performed their masterpiece London Calling in its entirety live.