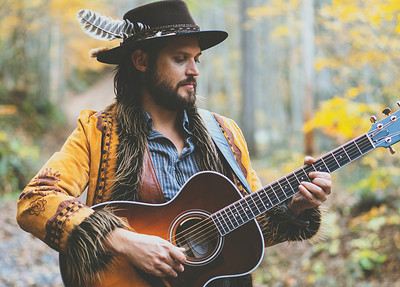 The Wardrobe Theatre, little gem hidden at the back of the Old Market Assembly, generally offers a programme of theatre plays but every fortnight, independent promotion company Ear Trumpet Music brings folk to the menu. People come in to find shelter from the rain on this miserable evening, and the room fills up very quickly. It’s the perfect intimate venue for rendezvous like these, where the old traditional repertoire of folk music can reverberate softly on the walls.

Eli West, co-headlining with Chance McCoy tonight, opens the show. This musician from Seattle enters the stage while playing his guitar, plunging the audience straight into his realm of folk songs, tainted with bluegrass and Celtic resonances. His voice, crystalline like pure water, enchants the audience as he shows indisputable skills on the acoustic guitar and on the banjo. His set is long enough to make him an entire part of the evening, not only an opening sequence. His performance, which breathes life into old folk songs with moving tenderness, is one to remember.

Chance McCoy decided to pick his solo career up again after having being part of the Old Crow Medicine Show for the last seven years. Before joining the famous band, Chance lived in West Virginia where he gave fiddle lessons. He recorded his first album, called Debut, in 2008. He is meant to release his new album this year but nothing is available yet, as he jokes tonight: “I’m promoting all these songs but you can’t buy them anywhere”. There are a few copies on the merch table though, for some lucky ones.

Accompanied by drums and a double bass, Chance’s set shifts between languorous fiddle playing, banjo picking and guitar strumming. Growing up in West Virginia, he was bathed in the folk music tradition from youth. When he was a teenager, he wanted to rebel against it and started to wear smokey eyes and listen to Nirvana, thinking he could escape it that way. Today it seems that he can’t really disown it, so his own way to rebel against the folk tradition is to play a few rock songs and use an electronic device that tunes his guitar automatically. Maybe the defenders of old folk traditions are turning in their grave, but it surely does entertain the bristolian audience which looks with admirative expressions and giggles.

The few numbers involving blastings of cymbals unfortunately doesn’t really suit the venue. The drums end up overpowering the rest of the instrument and the vocals. The acoustic songs with gentle drumming ally the best with the acoustics of the room. McCoy invites the crowd to close their eyes and picture valiant mountains, infinite lands and peaceful streams of his homeland on Lizard in the Spring while serenading them with a Celtic-sounding ballade on the fiddle.

The Shape I’m In is beautifully haunting and the softness of the vocals complements well the brushing of the snare drum and the coupling of the guitar and the double bass. McCoy is a talented multi-instrumentalist who has on top of his musical chops, a lovely voice and a natural easiness to transcend old songs anchored in tradition a new modern life, as well as composing his own original songs. He invites Eli West for an impromptu last song to conclude this enchanting evening which has trapped the audience in a time bubble for a few hours, away from the rain and the urban chaos.