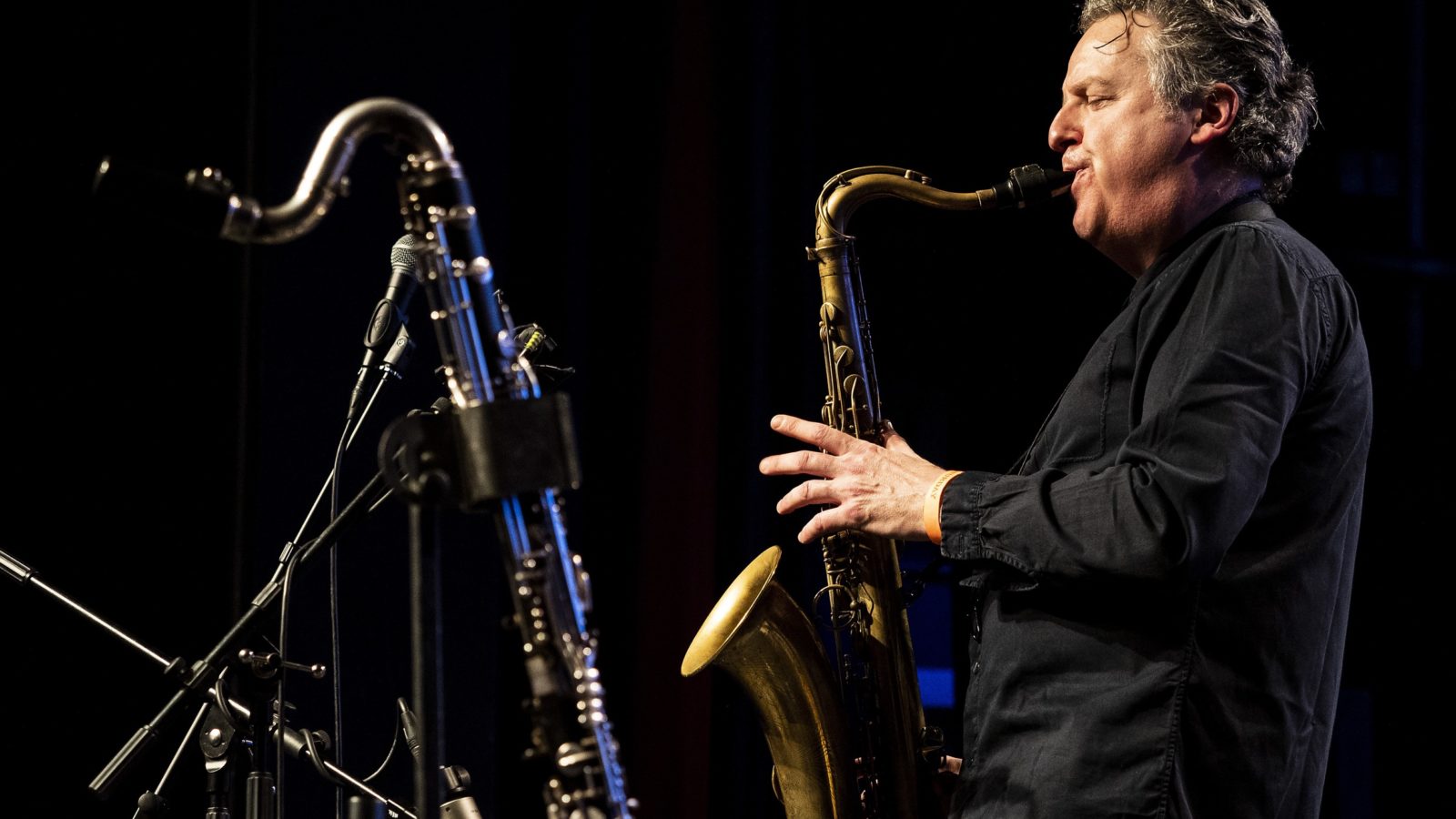 As an event originally designed around the possibilities of the Colston Hall how would the 2019 BIJBF cope out in the cold March air? Very well, it would seem to judge by the number of capacity audiences and the contented thrum of older heads in all corners of the Students Union building, home to much of the programme. Yes, there was a bit of walking involved to catch gigs at St George’s and O2 but a mild and dry weekend made that a pleasant enough experience. There were, however, a few unfortunate clashes in the schedule, no doubt splitting the audience for some gigs. That’s probably inevitable in any festival programme but some of these – like the collision of three excellent contemporary piano gigs on Saturday afternoon – could surely have been anticipated?

The Anson Room programme opened on Friday evening with Soft Machine, a regathering of three of the band’s veteran mid-70s line-up plus 50-something ‘youngster’ Theo Travis on sax. Despite leaning heavily on new material it was a complete time travel experience back to heady days when rock, prog and jazz melted together and the Softs were masters of all three. Seriously ponderous prog riffs, thunderous drum backfills and bedazzling guitar solos abounded and a largely veteran audience contentedly relived its youthful glory days. They were followed by the mightily-voiced Hannah Williams whose music was equally retrospective, gilding the tropes of 60s R’n’B with stabs of brass harmony and inspirational backing vocals. It was the perfectly-designed context for her old-school soul belting voice and defiant stage-seizing presence through a set of angry songs of heartbreak and survival. 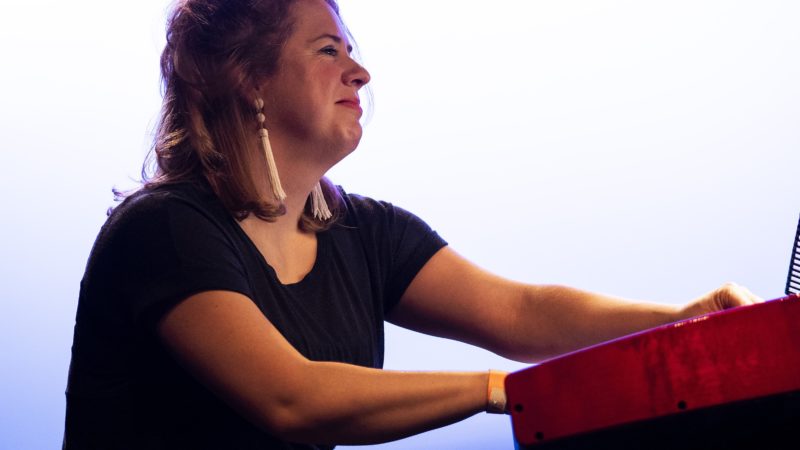 Atlas won the Great Bristolian Piano Off on Saturday afternoon, with returned local hero Rebecca Nash’s band premiering Redefining Element 78, a specially commissioned hour-long suite that used recurrent themes and textures through a series of movements that unleashed some very fine solo playing. Nick Malcolm’s trumpet gave a magisterial presence, while guest saxophonist John O’Gallagher’s head-on posture belied a fluent melodic approach. Especially pleasing was to hear Rebecca’s piano with her intelligent harmonic layering and well-judged flights of fancy, and she is to be congratulated for the excellent composition. 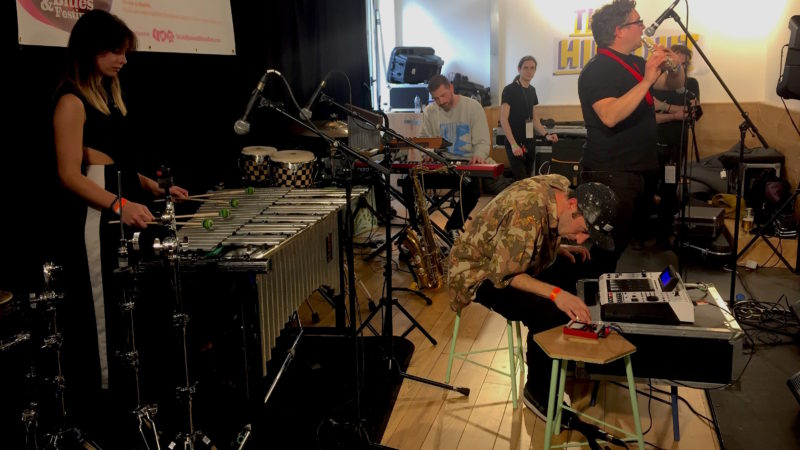 While not as capacious as the Colston Hall’s foyer the Balloon Bar made a good home for the free stage programme and supercool project Phantom Ensemble overrode technical difficulties with a great set combining contemporary production values with jazz, funk and hip-hop elements. The contrast between the music’s layering loops and remixed beatmaking and the acoustic sound of sax, flute and vibraphone was adroitly handled with echoes (hah!) of JDilla and the like. This current stream of dance production influenced jazz could well be seen as a contemporary parallel to the 70s jazz-rock that spawned Soft Machine in its day. 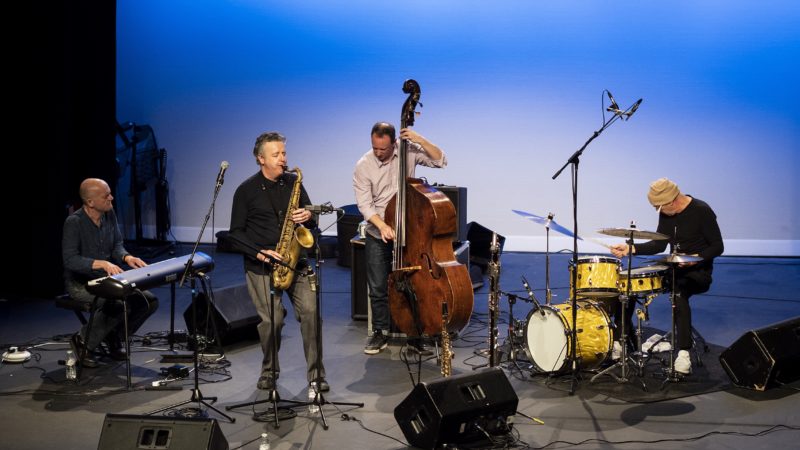 Back in the (very comfortable) Winston Theatre, however, saxophonist Julian Siegel’s quartet gave a blistering demonstration of the balance between virtuosity and collectivity as four exceptional musicians threw themselves into a set that seethed with creativity and never relented for a moment. Siegel himself was on brilliant form, as was drummer Gene Calderazzo who somehow kept his power in check without appearing in any way restrained. The only frustration was that the bass clarinet made so brief an appearance – albeit one of astonishing eloquence. The gig had sold well, pleasingly, but the following set from trumpeter Yazz Ahmed was a complete sell-out for her jazz fusion of traditional Bahraini themes and styles. Her drummer – Martin France – did an excellent job of somehow catching both Arabic hand drumming and drum’n’bass power bursts. 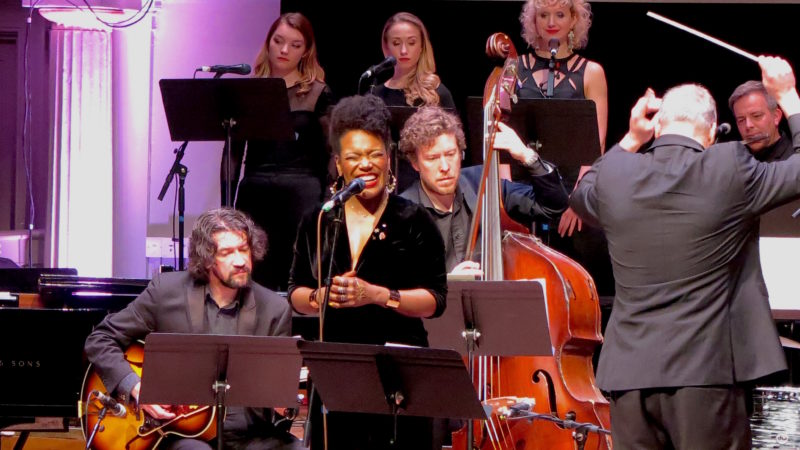 Saturday closed with the unfettered lushness of Ray Ellis’ string arrangements from Billie Holiday’s final album with singer China Moses catching the singer’s tone and style perfectly. It was a very faithful replica of the original, and whatever you thought of the music itself the live presence of so well honed an ensemble couldn’t fail to be impressive. 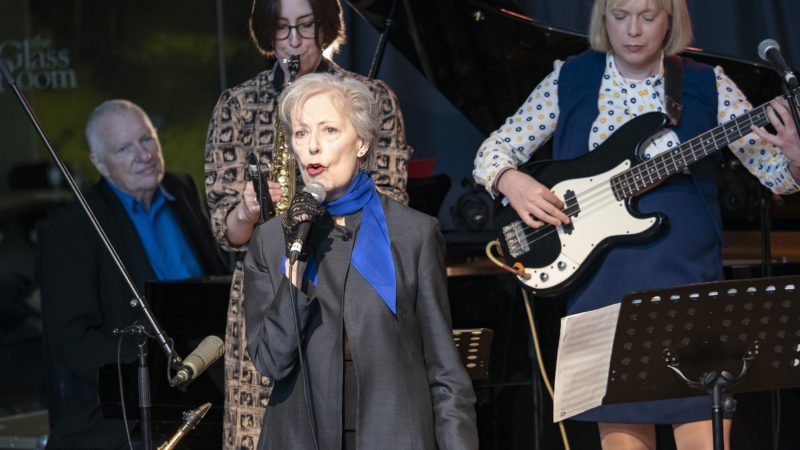 Sunday offered a bonus free stage back in the Colston foyer, organised by Jazz South, which was opened by Kate and Mike Westbrook’s Granite Suite, a swerving collage of musical stylings built around Kate’s Dartmoor-themed poetry. Kate’s vocal trademarks were there – growling and howling one moment, stately declamations the next, while the jazz rock music jumped through Hendrix flavoured metal, Weillian cabaret and free jazz blowing. They were not helped by a battle with the sound, however. 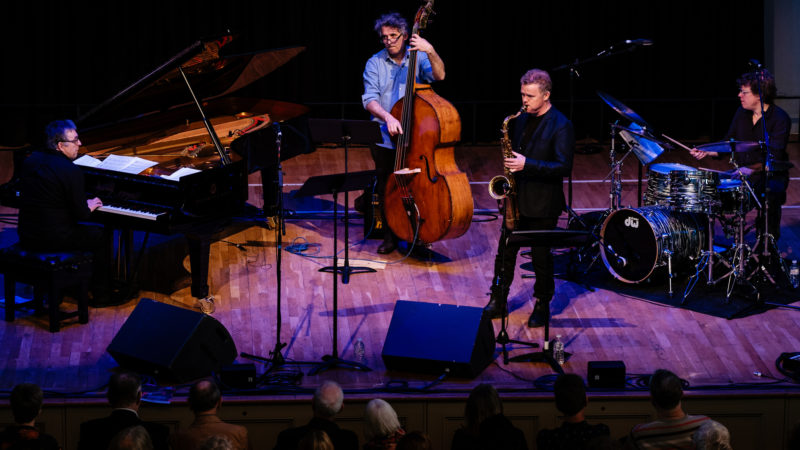 By contrast the crisp acoustics of St George’s were a sublime setting for pianist/composer Huw Warren’s suite of Dylan Thomas settings. This was almost devotional music with Iain Ballamy’s sax at its most lyrical and actor Mark Williams natural Welshness bringing the evocative words to light. The piano/sax dialogue for Fern Hill was particularly effective, jaunty and leisurely, catching the careless breeze of the verse, but the whole set was flawless and riveting. 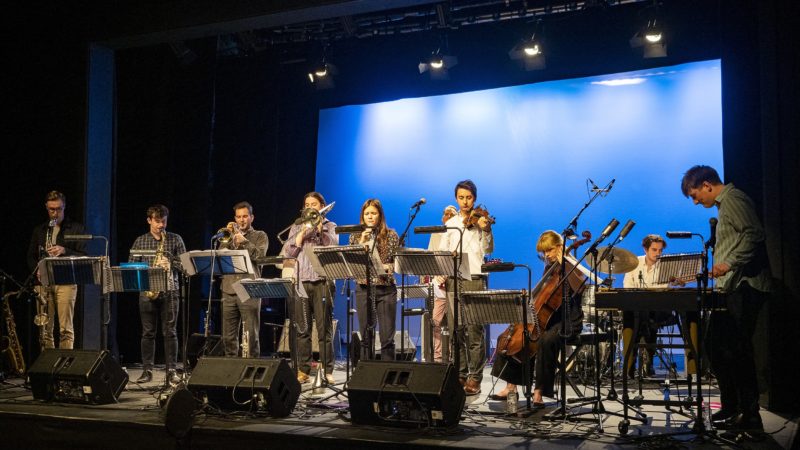 And there was a third suite to come later at the Winston Theatre when Jonny Mansfield’s Elftet performed Armitage, based on the Yorkshire poet’s quirky work. The 11-strong line-up provided for ever changing musical textures and complex numbers like the wryly philosophical Two Clocks framed vocalist Ella Hohnen Ford’s versatility with seemingly endless invention. 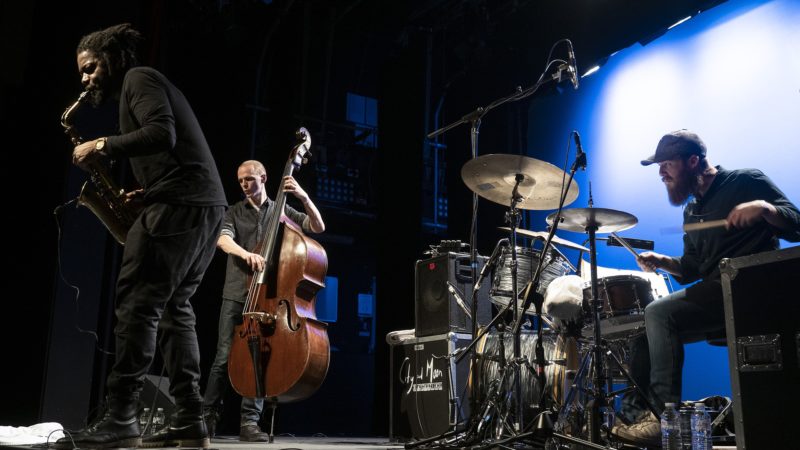 And then it was off into groove territory at the Winston, starting with Dennis Rollins Funky Funk, a precision made rhythm machine that blasted through a relentless set of highly danceable stuff. Sadly, of course, we were in a ‘sit down’ venue, thus rather defeating the music’s point, but it was still possible to appreciate some excellent solo work from Tony Kofi on sax, Tony Remy’s guitar and Dennis’ everbad ‘bone. Even the amiable Dennis was bested, however, by the combination of amiable ease and musical virtuosity of Soweto Kinch who closed the weekend with a splendidly entertaining mix of rap-based verbalising and assured invention on the alto saxophone. His trio deployed laptop and iPad over ‘live’ bass and drums to weave uncompromising contemporary jazz from hip hop ingredients.

So – overall the verdict had to be that the festival’s rehousing had worked out fine, with plenty of inspirational jazz moments on offer. Dealing with the demand was tough on the Balloon Bar staff – additional bar arrangements might have helped there – but the mood was fine despite the queues. Hopefully the numbers will pan out to keep this successful jazz event on the Bristol calendar.