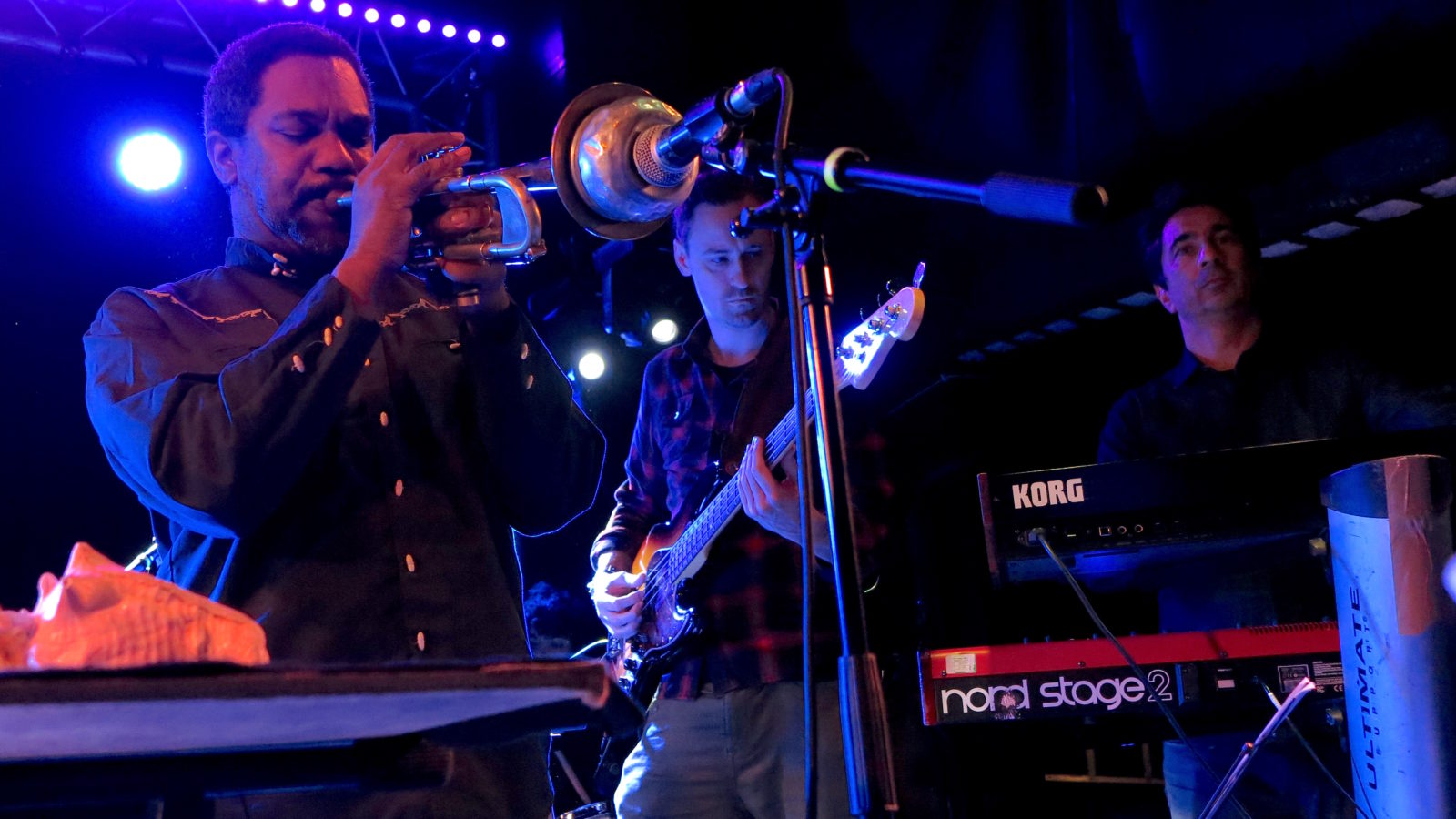 Reclusive Scottish electronica duo Boards of Canada’s 1998 CD Music Has The Right To Children may never have sold in huge numbers but it has always been acknowledged as a seminal moment in the development of electronic music. That status was surely confirmed by the sell-out success of trumpeter Byron Wallen’s imaginative revisiting of the album, treating the wonky synth and sample sound of the original to an electro-acoustic combination of his jazz quartet with the Gayan Gamelan ensemble. 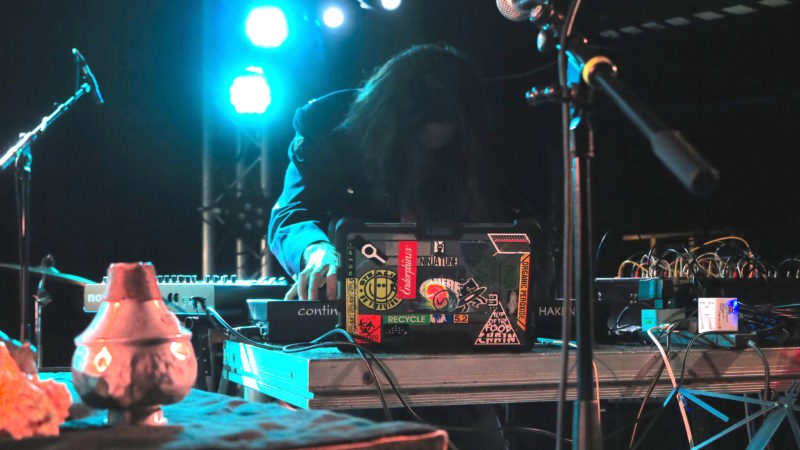 Thus a Thekla packed with earnest beards out to pay their respects to an under-celebrated musical milestone gave a somewhat baffled greeting to the barely lit figure of Italian sound artist Gadi Sassoon, an unannounced support act. Hunched over a table full of electronica his set relied heavily on the Haken Continuum keyboard, a radical tech breakthrough that allows for all kinds of swoops and swerves and which he deployed to provide a sort of plaintive Indo-Whale sound amidst a battery of samples and sequences. Scrupulously avoiding any form of dance music the pieces shifted in tone and style throughout, hints of techno giving way to raga en route to a sci fi soundtrack. It was all handled with a well-judged ear but, as ever with this kind of performance, there was a certain distance between artist and audience. It felt more like watching a skilled mechanic assemble a machine than being swept up by what you were hearing, and the background chatter in the crowd at times overwhelmed the music. 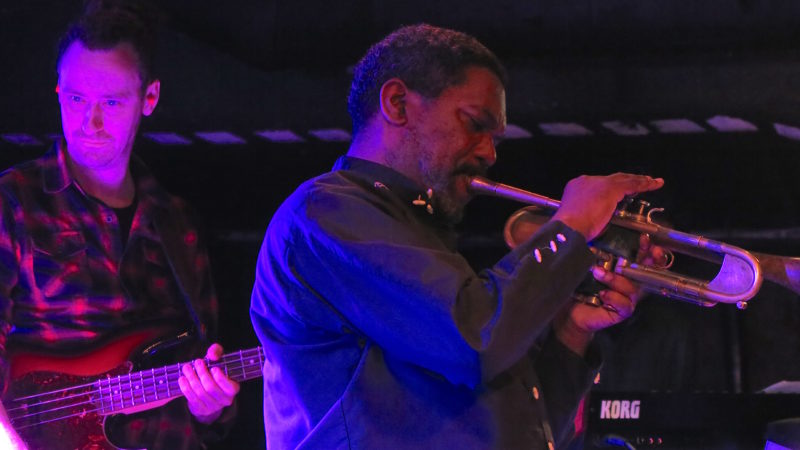 It took barely a few minutes, however, for Gadi and his table to vanish and be replaced by Byron Wallen’s Gamelan Ensemble, the accomplished jazz trumpeter leading into the opening track with a delicately phrased melody very much in the Miles Davis style. Atmospheric keyboard chords from Chris Jerome and a tight-wrapped drumbeat from David Dyson set the scene for the five Gamelan players to weave in a looping cycle of bells and gongs for An Eagle In Your Mind. It was a quite different sound from the scratching synthesis of the Boards of Canada original, yet somehow caught the same vibe. 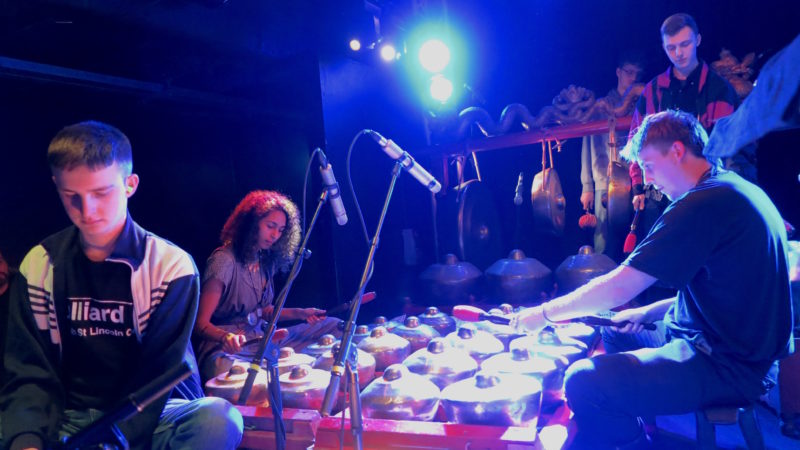 Byron’s own Heart to Art followed on, and while its briskly funky beat and free-flowing harmonised trumpet made for a good jazz number it jarred a little with the flow, particularly as it led into the complex melody and broken rhythms of Turquoise Hexagon Sun. That number made excellent use of the ensemble’s sound palette, the trumpet sustaining a murmuring acoustic dialogue with emphatic Gamelan, the sharp-edged bass guitar punctuating the drumbeats. It was spacious and moody and, again, captured the atmospherics of the original despite very different textures. 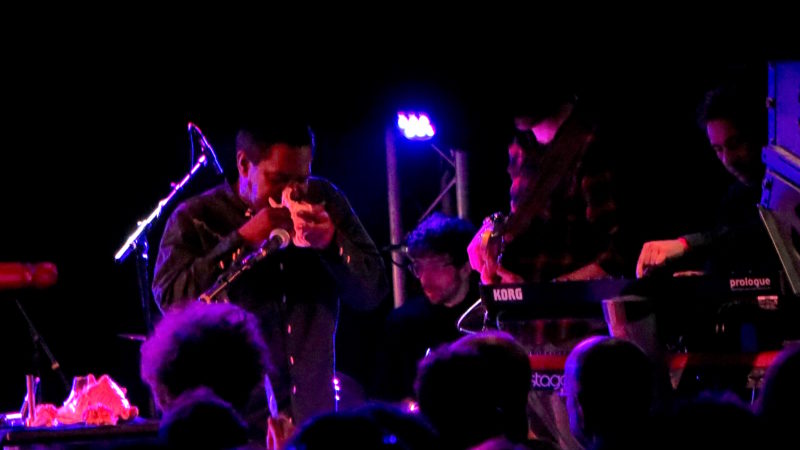 Later in the set Byron deployed his collection of conch shells – surely he is the finest (if not the only) exponent of the conch shell in the country? – most impressively looping them for a solo version of Bocuma. A later number would feature the shell sound with gamelan over analogue synth in a brilliantly constructed sonic texture that could only have come from this electro-acoustic set-up, making it clear what a great project it was. There’s no doubt that Byron has his own fans who would appreciate his original music for this ensemble but allying it with intelligently chosen inspirations (past sets have focused on Kraftwerk) clearly brings him a wider audience. Judging by this evening it is a decided win-win for all concerned.