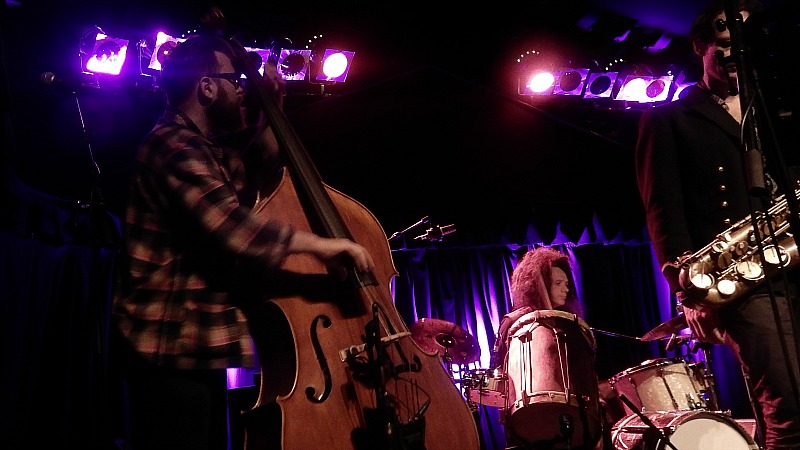 California’s Mojave Desert is an unlikely habitat for a Polar Bear, but that’s where drummer and bandleader Seb Rochford cooked up the music for latest album Same As You. The dis-location seems to have had its effect, resulting in a more measured and ambient sound from what has been a fairly incendiary collective, and it was interesting to wonder how this would manifest itself on stage.

But first we started in the dark as the band’s electronicist Leafcutter John showcased new solo material using what looked like two bicycle lights and a photo-sensitive interface to remix the sonic landscape of his pieces. The basic material had a Warped sensibility, more drone than groove, waves of electronic texture breaking through shifting patterns as the whirling lights half-caught his intent face like a moonless beach bonfire. It was easy listening – he has great taste in samples and sonics – but maybe hard to find the advantage of the light-driven approach over simply using your fingers.

It was easier to find Polar Bear, given that they’d turned the lights back on, but possibly less easy to recognise them. The usually mobile saxophone frontline of Pete Wareham and Mark Lockhart pretty much held their place on stage, drummer Rochford scrunched down behind a kit augmented with what looked like Native American drums while Leafcutter John was firmly placed behind a laptop at the side. They all looked quite serious, and possibly the most relaxed player was Tom Herbert, rolling around his bass with a pleasure that even his dense beard couldn’t conceal as he provided the loping basslines that permeate much of Same As You.

They stuck pretty much to the plot, too, letting the layered music assemble while operating within its confines. Wareham and Lockhart’s contributions were particularly noticeable for their restraint, elegant and elaborate throughout but rarely impassioned or assertive. The simplicity of Of High Lands, for instance, or the motif-driven swing of Don’t Let The Feeling Go shimmered with latent explosions that didn’t emerge, and though the chanted vocal of the latter echoed the Sun Ra Arkestra (recent Lantern visitors) the music rolled more easily than you’d have expected from those old timers.
The bandleader himself was sparkling, his inimitable ability to scatter himself around a drum kit while delivering rhythmic integrity at all times at the heart of everything, and Herbert’s bass threw out hinted references to things like Pull Up To The Bumper and Voodoo Child.

It got heads nodding, and there was even a bit of a dance posse going by the time they announced, teasingly, the last number: it turned out to be a 20 minute epic called Unrelenting Unconditional. The tune’s insistent Indian pulse beat and dubbed-out spaciousness kept things dance-friendy, albeit in a low-key way, and Wareham’s simmering solo almost broke out in a sweat. It all added up to a fine rendition of this new unfamiliar Polar Bear sound and if it felt a bit like they were covering someone else’s music that’s  what newness and change will do. There was no denying the quality of the music and the distinctive collective imagination behind it.

A final irony was an encore of Chotpot, a track from previous album In Each and Every One that kicked over the traces with briskly fractured beats, structured randomness and anarchic energy and reminded us just how hot Polar Bear could be before they went to the desert to get cool.