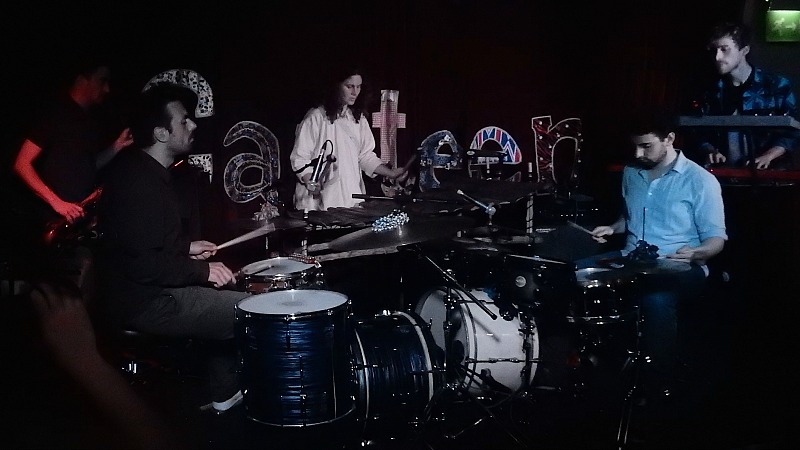 It was an impressive stage set-up: a four foot long African xylophone confronted by two full drum kits and complemented by a rack of synthesisers and a tenor saxophone on a stand. Inevitably this meant flailing stick action and from the first note they were off, drummers Dave de Rose and Simon Roth in a gleeful face off while the ebullient Bex Burch bounced and pounced behind the wooden keys of her Gyil. Dan Nicholls made a solid growling bass noise with his keyboard, George Crowley smooched in on the sax, and at once it was a groove, the distorted Gyil and modal sax carving a crossover between Congotronica and wonky Ethiopian funk.

In fact – as Bex’ somewhat lengthy ethnomusical introduction to a later tune explained – it was based on a North Ghanaian traditional tune, learned during her three-year Gyil-making apprenticeship in that country, but she had somehow connected with this group of contemporary jazz players from London’s Loop Collective and this fusion was the result. In fact we hardly needed the explanation: the plain fact was that this music was motoring along, catching the ear of the whole room  and turning it into a proper audience (not always the way it goes in The Canteen). By the end there was even dancing, the proper recognition of a great gig.

In between we had a number of largely un-introduced tunes that each offered a tight 12-time rhythm for the drummers to play around with, a singing Gyil melody line and that growling bass. Dan Nicholls also added keyboards – always a fine loose jazzy touch – but it was generally George Crowley’s insistent raga-style sax that provided the character of the pieces. One notable exception was a dubbed out reggae version, the Gyil undistorted and clear, the drums tight-locked to the beat and the plangent phased bass notes – it provided a breathing space before the more driven stuff returned and Bex resumed her vigorous jiving behind her instrument, a slightly incongruous pre-Raphaelite figure totally abandoned to her music.

On their Facebook page they called this ‘world folk’ but there was no doubting the jazz presence, especially on the wig-out of the last number with both drummers going for it and Crowley’s sax channelling John Coltrane for all he was worth. As a fusion project combining exotic tradition with accessible dance forms it had proved highly successful and the sheer quality of the musicians involved meant that it had been a flawless performance from start to finish. Once the festival circuit finds them they’ll be monstrous but, until then, they’re pretty damn good whatever.