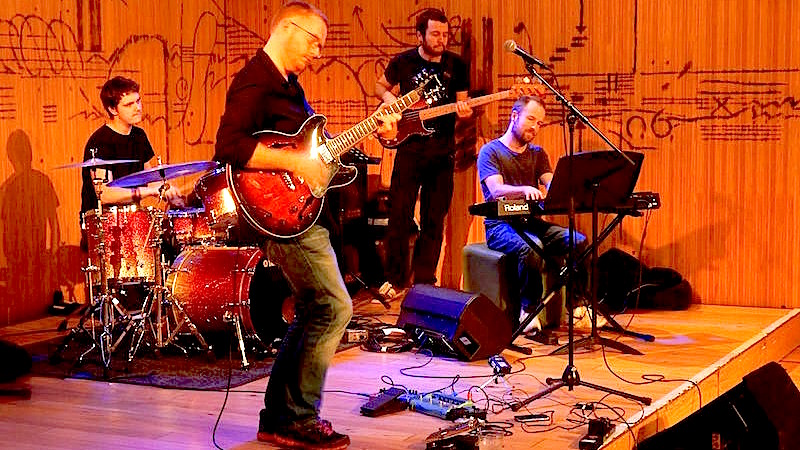 If you like live music around Bristol the chances are you’ll have seen Mark Lawrence playing guitar behind a singer or in a band – notably the brassy funk outfit Monkey Chuckle or psychedelic fusioneers Diamond Head.

This new project bearing his name gives him the chance to show exactly what Mark Lawrence is about, musically speaking.

As you’d expect there was a slight retro feel to the music – jazz rock’s heyday was probably the 80s and so there are hints of Weather Report, Headhunters, even Steely Dan to be picked up.

For an early outing the band was understandably disciplined, locking the music down, the bass and drums keeping to the script and the keyboards floating deftly throughout while Lawrence’s guitar took flight.

Both guitarist and keyboard player had a keen ear for sound, using pedals and effects to catch exactly the right combination as on Lucky For Some, a slick seven-time workout that let Nowak soar with a reedy Zawinul-style synth over Lawrence’s crisply Methenyesque guitar.

The elegiac ballad Widenings was expecially effective, the tunes spaciousness allowing a plaintive, vocalising guitar that hinted at Hendrix via George Benson.

Gilkes’ drumming was restrained, riffing economically with just the occasional flourish as in Dim Song’s switchback electro-Flamenco with a swing beat chorus, and Ranyard only really got to cut loose on the acid jazz workout of final number Where’s Snowy?, unleashing a bubbling funk that verged on the slapstick.

For a new band debut, however, the overall effect was a highly successful crowd-pleasing set with enough variety to hold the attention and the clear potential for some real fireworks once the band can let their hair down with the material.