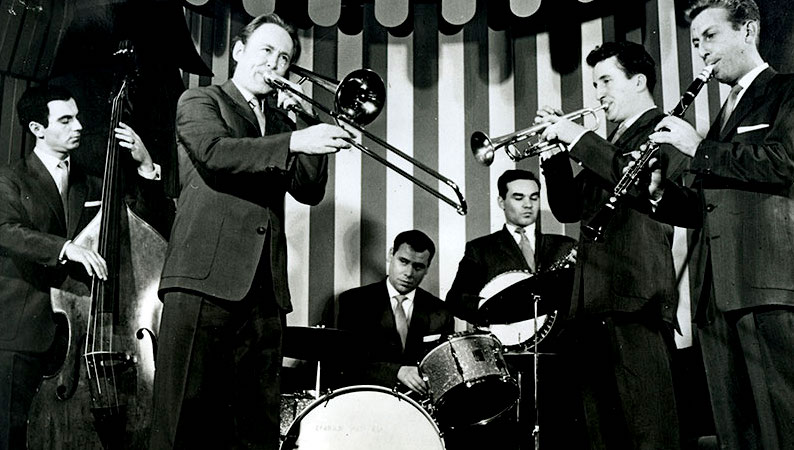 One of the founding fathers of the British jazz scene may have finally hung up his trombone but the great Chris Barber’s band and legacy will surely long endure. This week St George’s pays tribute to the man and his astonishing 65 year career in the jazz trade. By contrast The Attic hosts some very now glitch-hop from ‘brass and bass’ producer Don Johnston.

It’s impossible to overstate Chris Barber’s contribution to the establishment of a homegrown jazz and blues scene in the UK. As player and bandleader he was at the heart of the trad jazz movement from the early 50s onwards, but as promoter he also brought over seminal black blues musicians like Muddy Waters and Big Bill Broonzy, inspiring the 60s British R&B boom that spawned the Rolling Stones, Eric Clapton and their ilk. His playing career continued until August this year when, at 88, he finally announced his retirement, He’s handed over The BIG Chris Barber Band (St George’s, Sunday 15) to trombonist Bob Hunt, himself a 30 year veteran of the outfit and a safe pair of hands (lungs?) that should ensure the Barber legacy goes on.

Another stylish and accomplished saxophonist comes to the Fringe this week, leading the Kevin Figes Standards Quartet (Wednesday 11). Kevin is a fine composer with a classic melodic ear and this foursome is itself a class act. With a CD of new material to showcase and a strong following at The Fringe this should be an atmospheric and rewarding evening. You can follow the band’s bass player Riaan Vosloo from that gig to the Bebop Club on Friday (13) when he appears with the Dan Newberry Quartet. It’s an impressive band led by the young saxophonist (he’s still at college in Cardiff) who’s been tipped by the likes of Iain Ballamy and Art Themen, no less.

For a powerful blast of world-flavoured jazz there’s Femi Kuti (O2 Academy, Saturday 14), son of Afrobeat legend Fela, with his mighty horn and percussion encrusted Positive Force band. Having started as a more rock-influenced player, Femi’s style has evolved towards a more rooted form of the music. Slightly more subtle (but just as powerful, rhythmically) Cuban trumpeter Michel Padron leads his Saoco Collective at the Canteen on the same night for some non-stop Salsa Duro action, New York style. Meanwhile No Go Stop’s vigorous tenor player John Pratt turns away from Afrobeat with his boogaloo trio JP3 (Canteen, Wednesday 11). It’s a great and groovy threesome featuring Ruth Hammond’s classic way with a keyboard and the ever-impressive drumming of Emma Holbrook while, in a similar vein, the organ and drums duo of Olinder/Tween will appear with a guest vocalist at The Fringe (Friday 13).

The release of their excellent CD Awaken in July saw well-established local swing quartet Schmoozenbergs take to the road in a prestigious national tour that will run through to Christmas. Happily they’ve slipped in an extra date at Canteen (Sunday 15) to let us catch up with their new original music in the Paris cafe style, with violinist Gina Griffin very much to the fore. Another dextrous fiddler, Annalise Lam brings her quartet, including bass player Al Swinger, to the Stag & Hounds on the same day. Speedy cyclists could well catch both sets.

Exeter-based producer Don Johnson (Attic, Friday 13) has a reputation for bringing jazz, folk and contemporary dance music together in imaginative fusions. Under his careful guidance his live band somehow catches all this with the kind of energy local heroes Snazzback also deliver. Snazzback does 140 (Gallimaufry, Thursday 12) is their re-imaging of dubstep and grime, with a guest MC.

And, finally, some unexpectednesses … Polish ‘free schronk’ trio Kurws are part of a Schwet Lodge ‘Schweptember’ session in the Exchange’s refurbished basement (Friday 13). The bill also includes the intriguingly described ‘industrial trombone and tap-dance’ trio Les Croisières Dolori. Over at the Gallimaufry (Tuesday 10), improvising synth-funk trio D.A.M. continue to explore their new sound and next night at the same venue the highly spontaneous Waldo’s Gift focus, somewhat implausibly, on the music of Abba. Thank you for the music, indeed.