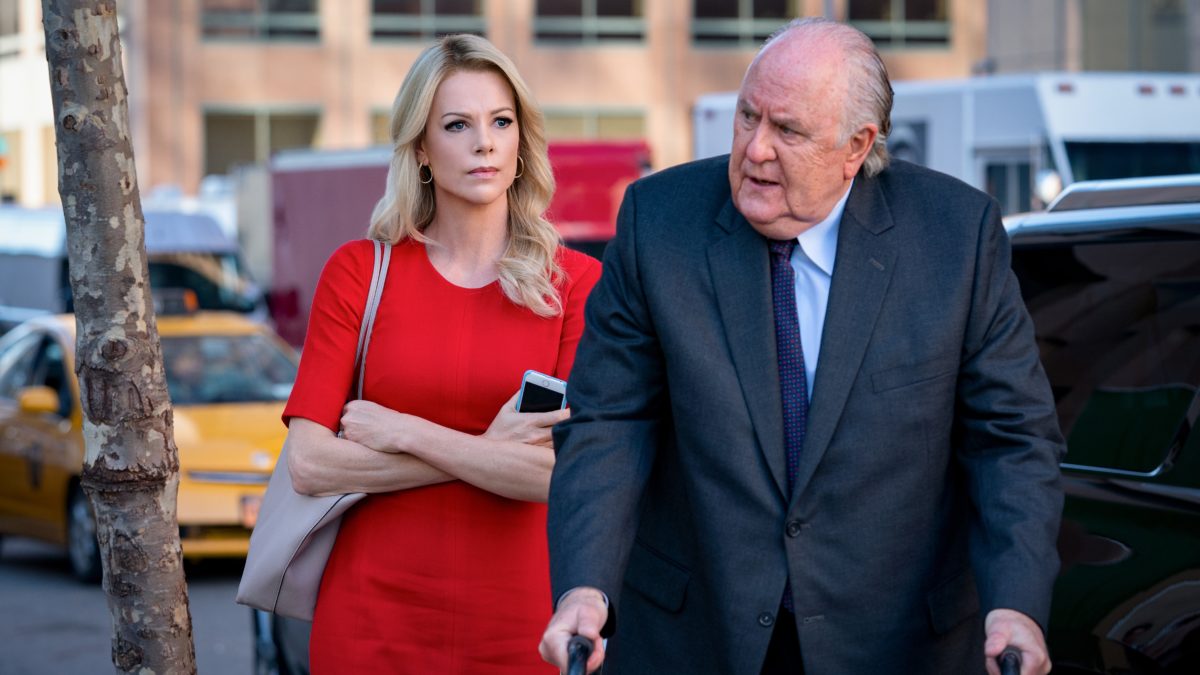 “To get ahead, you’ve got to give a little head.”

“Nobody wants to watch a middle-aged woman sweat her way through menopause!”

Yes, if you wanted to create a panto villain for the #MeToo era, you couldn’t do better than the late Fox News CEO Roger Ailes. As portrayed by John Lithgow from inside a fat suit (not the only augmentation on display in this prosthetics-heavy movie), he’s a leering, misogynistic, reactionary dinosaur who exploits his considerable power to secure sexual favours from ambitious young women, with career ruin facing those who decline to suck his rancid old cock. Fruit doesn’t get any lower-hanging than this, affording ample opportunity to create the ultimate Hollywood Liberal flick.

Bombshell certainly delivers all the snappy info bursts and crowd-pleasing, worm-turning moments you might expect from the director of Trumbo and co-writer of The Big Short, but it seems strangely reluctant to interrogate the Faustian pact entered into by Ailes’s victims, who endorse the toxic Trumpy politics that permit such attitudes to flourish and repeatedly deny the heinous crime of feminism.

The film plunges us into the deep end as it spins its busy tale of three blondes – two veterans and a composite sacrificial ‘Anchor Barbie’ newcomer – whose lives only occasionally intersect. Charlize Theron gives the best performance as Megyn Kelly, who’s best known to non-Americans as the interviewer who was accused by Donald Trump of what she describes here as “anger menstruating” after giving him a hard time while moderating a debate during the 2016 presidential campaign. This forms the backdrop to Bombshell, a full 12 months BW (Before Weinstein). Prosthetics enthusiast (remember her funny stick-on nose in The Hours?) Nicole Kidman tries on a cleft chin as veteran anchor Gretchen Carlson, who finds herself demoted for no longer being in the first flush of youth and failing to see the funny side of her male co-hosts’ toe-curling on-air locker room ‘banter’. It’s the aggrieved Carlson who files the lawsuit that eventually leads to Ailes’s downfall.

Margot Robbie has arguably the easiest role as she’s not charged with impersonating a real person, but instead plays shiny, eager, fictitious ‘Christian influencer’ Katya Pospisil, representing the hordes of invariably leggy young “demographically friendly” blonde women who traipse into Ailes’s office to display their wares (“It’s a visual medium,” he leers as she’s obliged to hike up her already short skirt, in the film’s most uncomfortable moment) and subsequently demonstrate their ‘loyalty’ in the traditional manner.

Back in 2012, Austin Powers director Jay Roach gave us The Campaign, which was dismissed at the time by snooty critics as a typically silly and juvenile Will Ferrell comedy but seems like the most prescient anticipation of Trump-era US politics now we know that moron-level populism, rather than House of Cards-style Machiavellian scheming, is what’s required to get elected (watch it again if you don’t believe me). Bombshell melds this irreverent approach with writer Charles Randolph’s skill at rendering complex issues both comprehensible and entertaining, with plenty of fourth wall-breaking. It’s particularly good at nailing Fox News’s relentless workplace sexism and the ‘frighten and titillate’ approach to engaging its audience (one zinger observes that the perfect Fox story is one that will “scare your grandmother and piss off your grandfather”). But while the film certainly doesn’t make the mistake of assuming sisterly solidarity among these ambitious, competitive, staunchly conservative women, whose main fear is of being defined by scandal if they speak out, it chooses not to question whether they bear any culpability for conniving in the objectification of themselves and others. Still, Bombshell is certain to annoy the shouty, red-faced, middle-aged men of social media, which can only be a good thing.