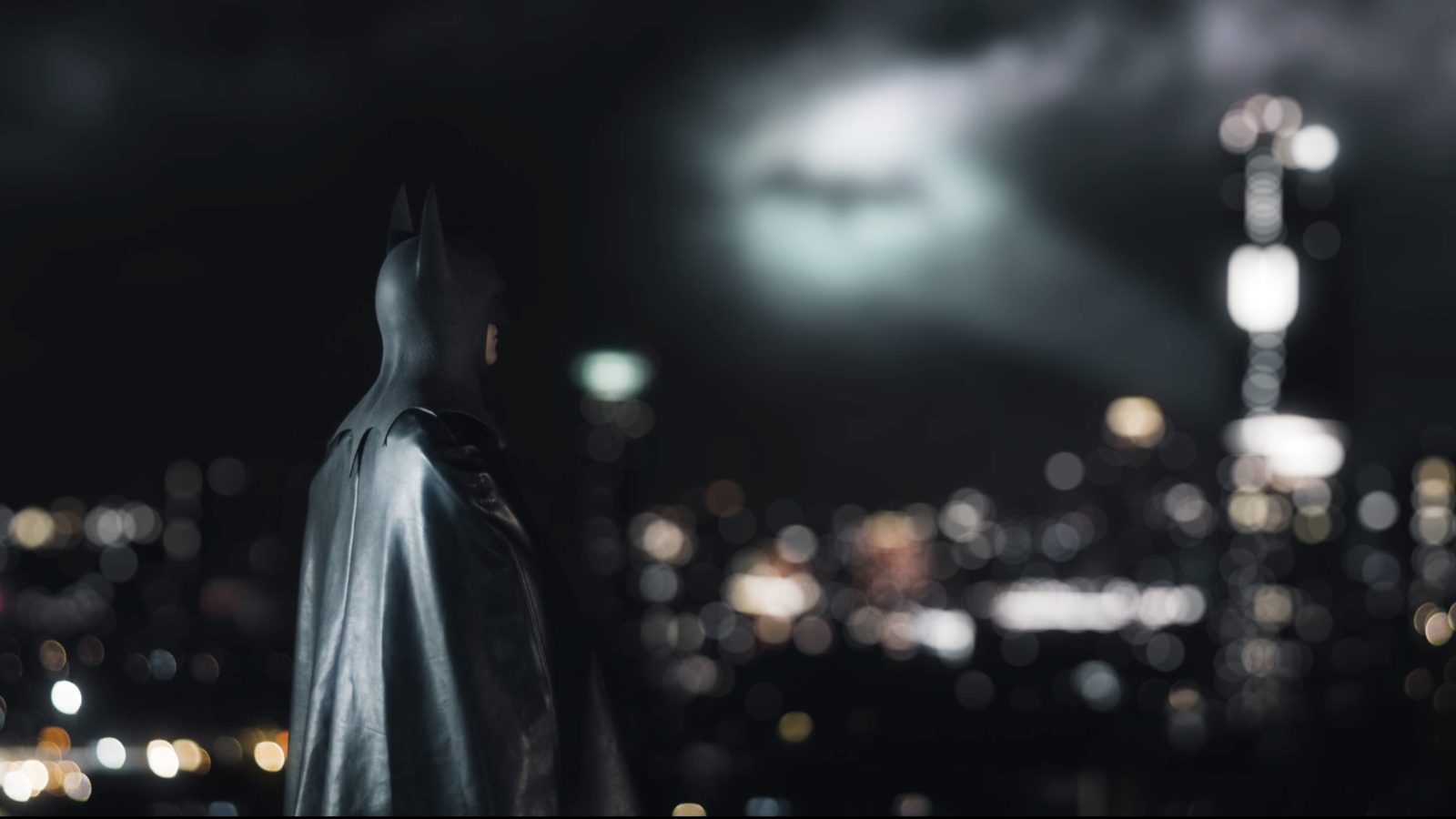 From his lofty vantage point, the caped crusader looks down upon the crime-ridden streets of . . . St. Nicholas Market? That’s right: Bristol is Gotham City in Living in Crime Alley, the first Batman film ever to be shot round these parts.

The eight minute fan fiction short, which has been gaining traction at film festivals around the world, is the brainchild of 28-year-old UWE graduate filmmaker (and former Starbucks barista champion) Rob Ayling. Put aside any expectations conjured up by the rubber-suited DC superhero or the phrase ‘fan fiction’; this Batman film is very different from those big-budget Tim Burton and Christopher Nolan movies, packing an unexpected social message.

“Essentially what happened was that in 2017 I was made redundant from a really good gig as a filmmaker in London,” explains Rob of the project’s genesis. “I was not in a good place financially or creatively. I just wrote the script for fun as a confession of my frustrations. The draft had no ending and I got kind of stuck. Then it just hit me: what do I love besides cinema and telling stories? I thought, why don’t I just throw Batman into the mix?”

The idea was to tell a story that hadn’t been told in this world before, from the viewpoint of a downtrodden Gotham citizen. “We’re so used to seeing Batman on tall buildings looking down on the city. I wanted to tell a story from the ground-level perspective, someone who’s actually living and breathing that world. He’s trying to bring hope to his daughter in a city that really doesn’t have that much hope until a man dressed in a bat suit turns up. The question that’s being asked at the end is: ‘Is he actually doing any good?'” 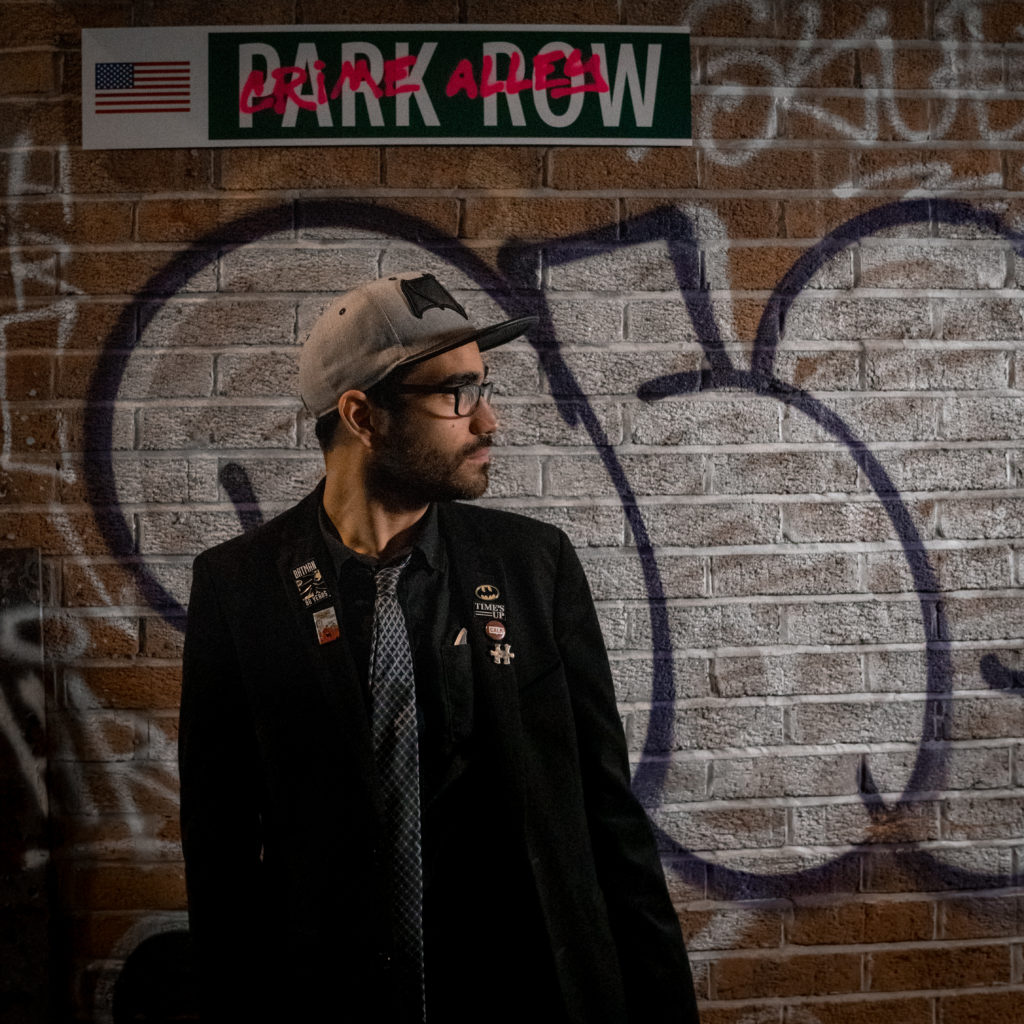 One thing led to another and his script was submitted to a fan fiction festival, where it walked away with the Best Screenplay award. It was subsequently performed in New York. But Rob was nervous about bringing his creation to the screen. “There’s a level of expectation. You’ve got to spend a certain amount of money and set a certain standard of filmmaking for the audience to fully believe what they’re watching. By 2018, I realised this was exactly what I had to do. I needed to challenge not only myself but also what the audience expects from a fan film.” 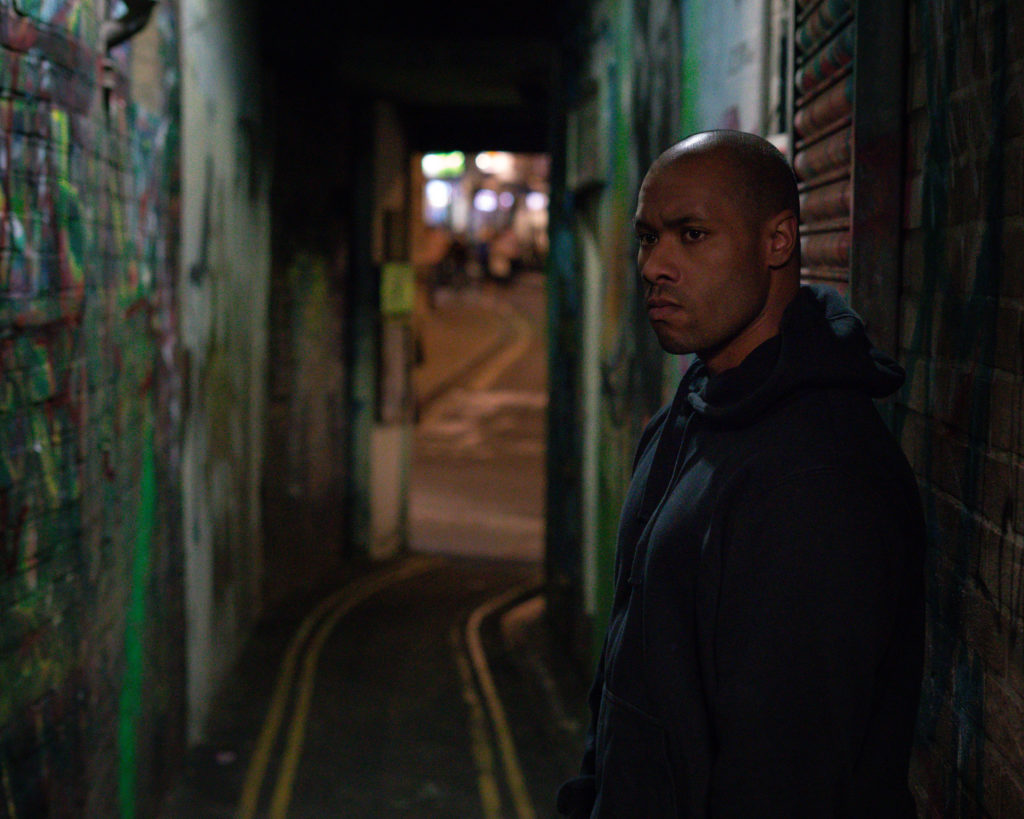 Vincent Jerome in Living in Crime Alley: shot on the mean streets of Bristol

But what about the copyright issue? How do you prevent DC Entertainment and Mr. Warner and his brothers unleashing the lawyers? “All I had to do was confirm on every piece of documentation and all advertising that this is a non-profit film. I’m not making any money from the film whatsoever. Anything I do make will be donated to charity straight away. I’ve already donated money to Medicinema.” 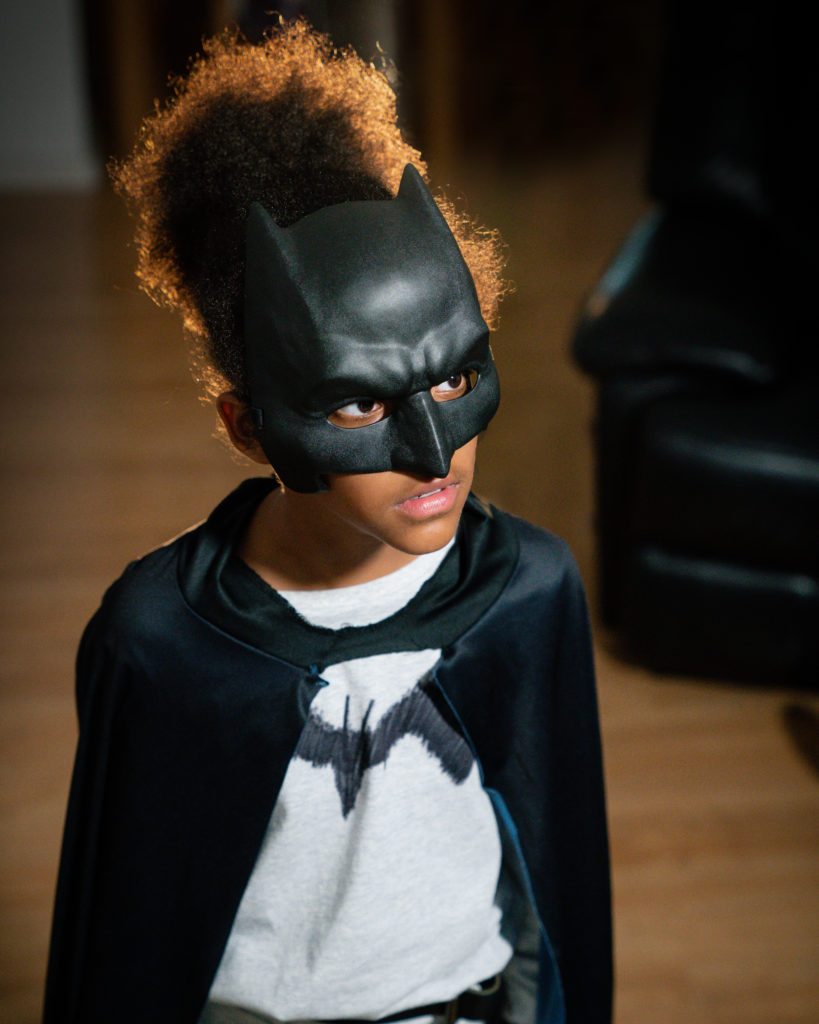 With a part-crowdfunded £5,000 budget, Rob set about finding locations. It was always his intention to shoot in Bristol. “They’re filming the new Batman film in London and I feel like we’ve seen enough of London as the background to Gotham. To me, Bristol has always been a very cinematic city. It’s a very beautiful city but it also – and I’m trying to pick my words carefully here – has a gothic, grungier feel to it. Straight away, I thought we have got to shoot on Stokes Croft. I don’t mean any disrespect in saying it’s not the most glamorous of places to film. But it does highlight the ideas that the film deals with.” 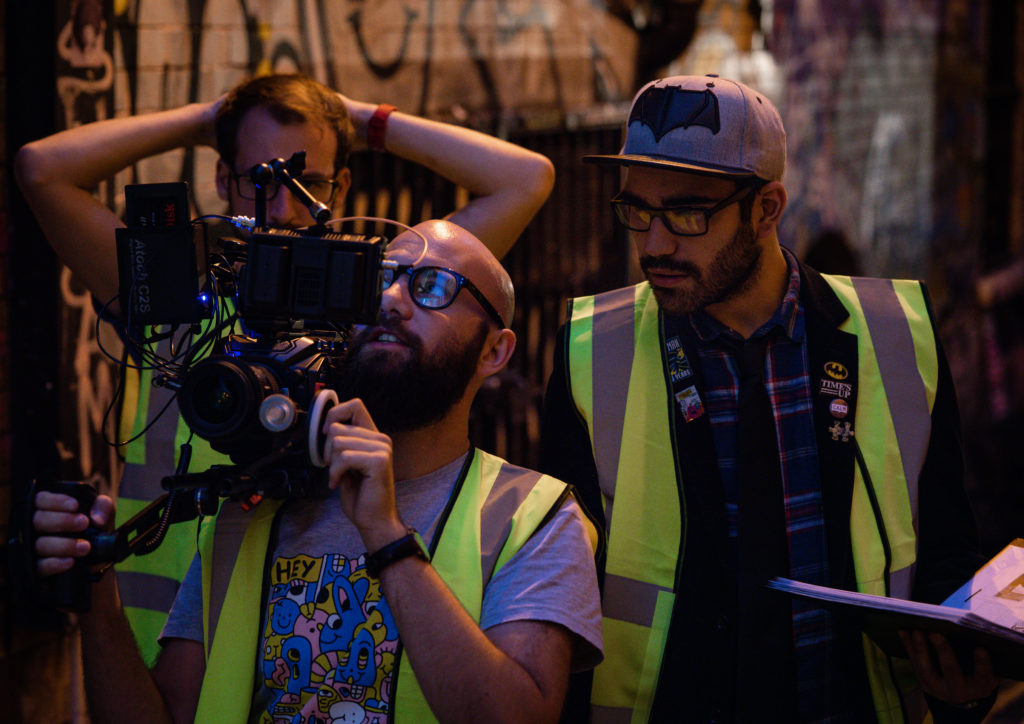 Shooting Living in Crime Alley on the streets of Bristol

Unfortunately, the police nixed his first choice of location: Hepburn Road, aka ‘Crack Alley’. “They basically said if you go down there with one camera and a piece of sound equipment you’re not going to survive. They advised us not to do it whatsoever. They said, ‘You’re more than welcome to film along the streets of Stokes Croft, but that alley is a no-go.'” 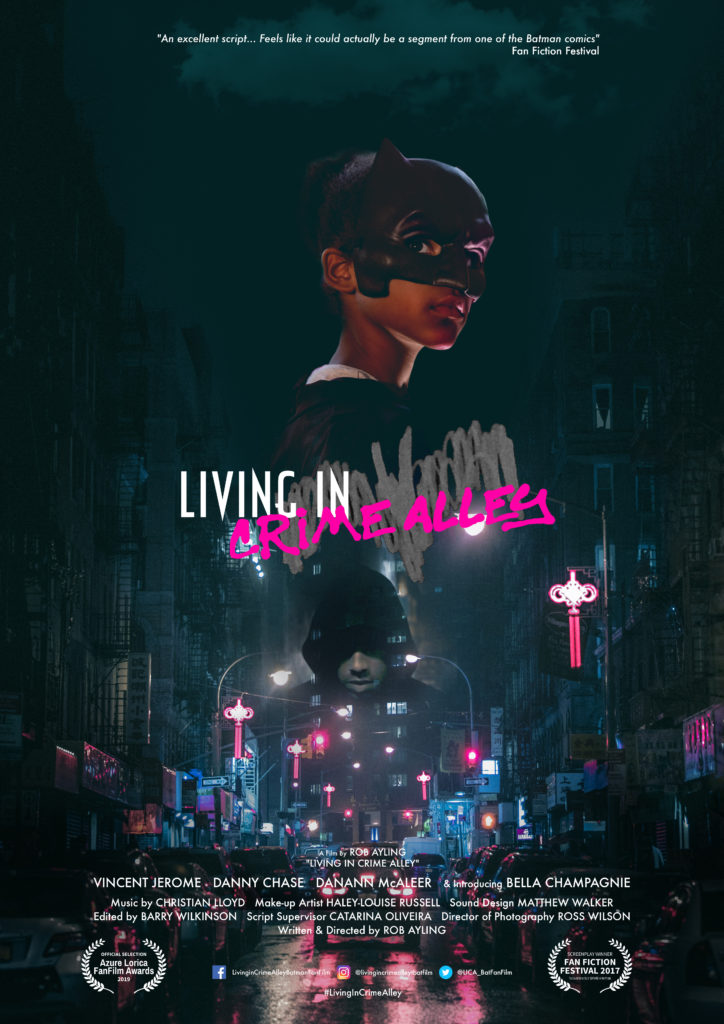 In the end, Rob and his crew wound up using an alley off Corn Street for many of the external scenes. Watch closely and you’ll also find a nerd-delighting nod to Batman lore. “I love that moment when Batman is on the rooftop of Park Row. The hardcore fans will understand that, because Park Row in Gotham is where Bruce’s parents were murdered. I thought it was a good piece of poetry.” 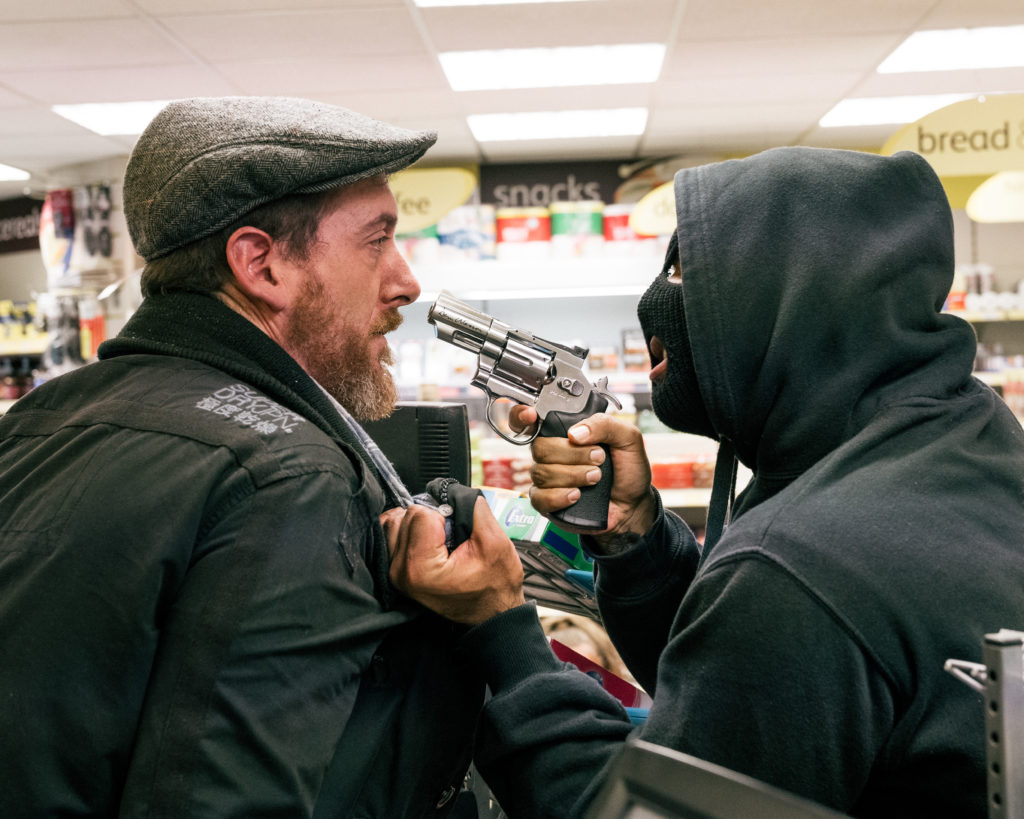 A tense scene from Living in Crime Alley

Living in Crime Alley is now available to view on YouTube (embedded above) and will screen at festivals and LA and New York in the coming months. It’s also a semi-finalist for no fewer than five awards. In addition to being quite a calling card, it’s also given Rob an unexpected level of fame. “I kept getting recognised at Comic Con. People came up to me and said, ‘You’re that dude who’s making the Batman film on Crime Alley in Bristol.’ It’s been quite overwhelming and bizarre but at the same time very nice to get the recognition.”

All photographs supplied by Rob Ayling