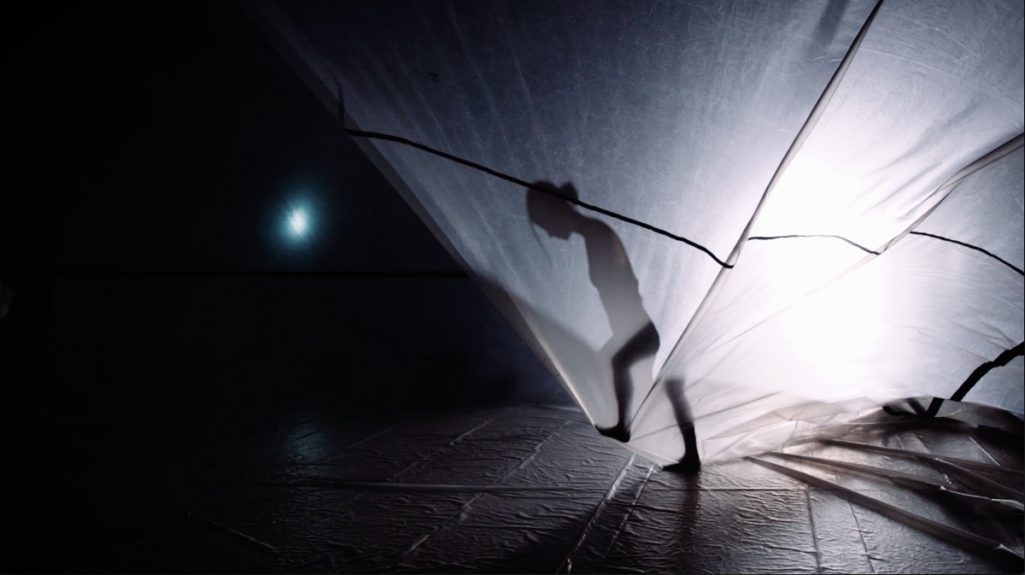 When I mentioned that I did not really know what to expect with this piece, Adrienne replied “no-one knows until they see it in person. It’s fun to watch audiences interpret it in different ways”.

I’m grateful for the time Adrienne took to explain it further, as I’m now anticipating a potentially life-enhancing event. There are two layers to this performance, both of which I think are worth knowing about ahead of time. The first layer is the people who inspired it – architects Shusaka Arakwara and Madeline Gins. The second layer is the way it is presented – in and around a big inflatable dome.

Artists-turned-architects Arakwara and Gins foreswore mortality and believed that the body was the central tenant in any space. They designed ‘procedural architecture’ to assist the body to go on living for longer, such as the remarkable Reversible Destiny Lofts in Tokyo. Their philosophical designs intended to challenge and stimulate the senses. Although now both dead, their mind-over-matter ‘reversible destiny’ philosophy lives on.

During a stay at these lofts in 2017, Adrienne began the fun process of making Puzzle Creature. “As a choreographer, I’m repeating patterns and challenging myself to create new ways of working with the body. Living and sleeping in Arakwara and Gins’ environment provided a wonderful new stimulus. They trick and play with perceptions, and Puzzle Creature is a response to this.”

Audiences first encounter the inflatable dome when they are invited to step inside it upon arrival. Ticket holders will experience the Colston Hall Foyer in a totally new way, and passers-by will witness something unusual going on in the Foyer thanks to the Hall Foyer’s large glass windows.

“The dome really does transform a space. It either fills the centre or takes an imprint of the walls and architecture,” adds Adrienne. The wearable art by fashion artist Ana Rajcevic and the lighting design by Nico de Rooij and Djana Covic add to the trickery.

In the second half, the audience is led out of the dome which is then deflated, creating a bumpy landscape for the dancers to navigate. The whole effect is intended to make us question the habits we form, and if we change our architectural environment could we ‘decide not to die’.

“Arakwara and Gins were such forward-thinking artists, involving elements of AI and maths. I think there is some truth in their philosophy,” says Adrienne.

Adrienne and the Neon Dance team are based at Swindon Dance, but have never performed in Bristol before, despite being so close. The rest of Colston Hall is shut due to the current refurbishment, so Puzzle Creature brilliantly makes use of the available space in the Foyer.

“I’m really happy to have found a work that feels appropriate. It’s a passion of mine to think about how to make works that can shapeshift. I also have a desire to not show my work to the same people”. Adrienne is excited by the fact that Colston Hall is primarily a music venue, as that will engage a different audience as well as likely generate interest in the original score and audio design by Sebastian Reynolds.

Neon Dance are connecting this piece with Bristol in two very unique ways. The first is the involvement of Brizzle Connects, an action for blind people social group who were the test audience for the signing and audio description. The second is the recruitment of a young Cultural Connector, who had to be Bristol-based and aged 18-24.

This year, 21-year old University of Bristol graduate Lucia Fortune-Ely will find ways to record and describe the production on their own terms, and explore ways to connect the work to different communities in and around Bristol.

“The result of the 2018 cultural connectors saw a very different set of audiences in attendance who had absolute permission to be there,” Adrienne adds. “Each cultural connector forms their own response to the work. In the past we’ve had a YouTube poet and a tapestry. The work doesn’t end after the performance is ended – it can trickle out into the community.”