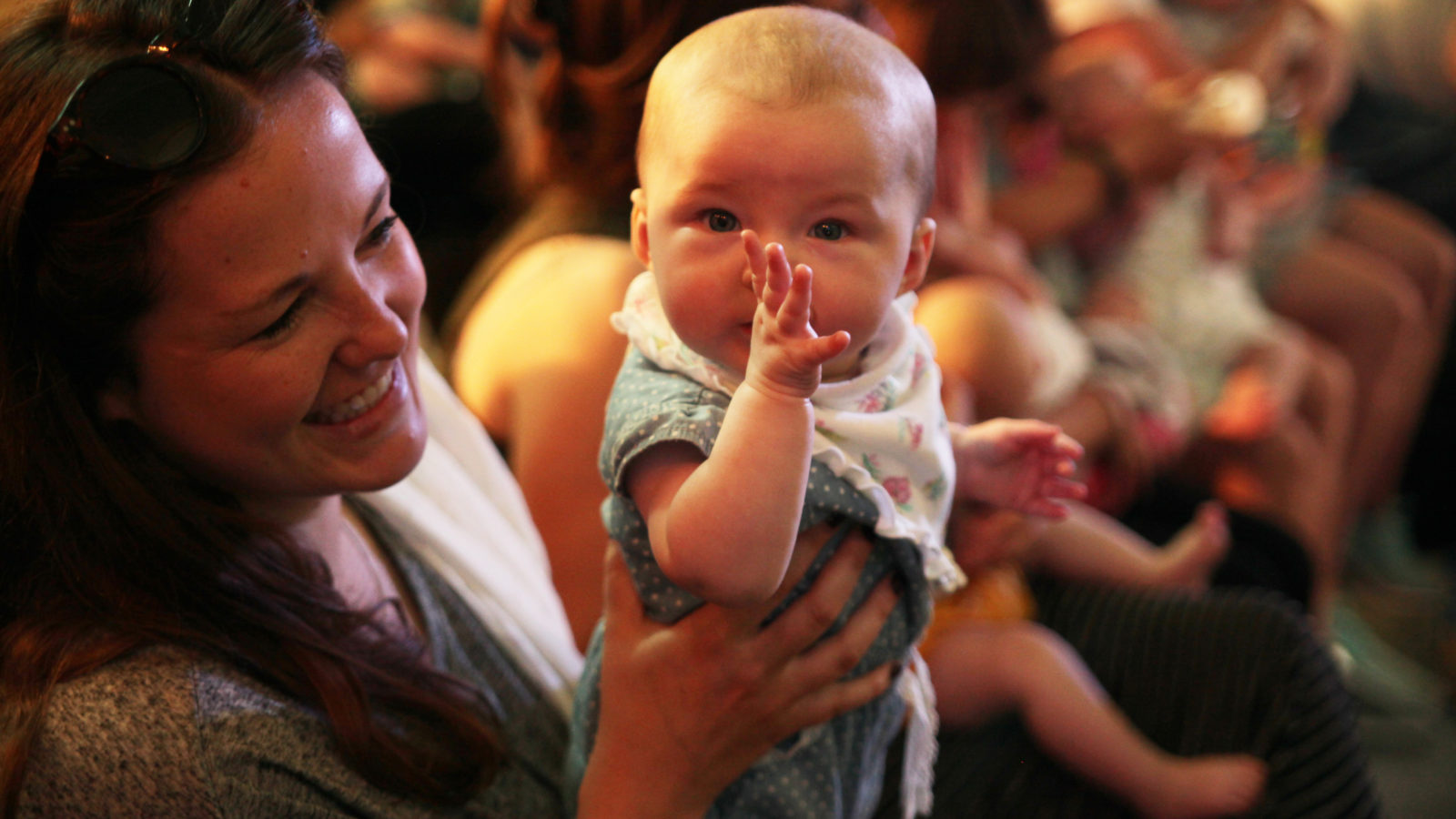 Bristol has a long history of creating excellent comedy nights and, right now, the local comedy scene is thriving, with everything from bijou new material gigs to bigger professional nights dotted around the city. Bristol also regularly tops the lists of best places to raise children and local parents often rave about the plethora of activities available. From baby yoga to toddler groups galore, new mums and dads have plenty to keep themselves and their little ones entertained around here.

Inspired by her recent foray into motherhood, Angie has dreamed up a very different addition to the comedy landscape: the Daytime (Baby) Comedy Depot, a comedy club where babies are welcome. 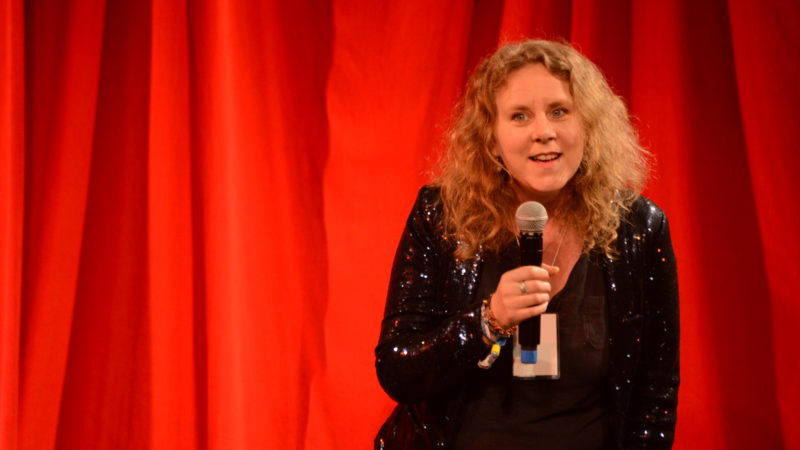 But don’t be fooled into thinking this is going to be kids’ stuff. “It’s the same as a normal comedy club in terms of material,” Angie explains. “It will still have adult content, sweary words and the odd birth story flashback. The only difference is you can bring your baby and no one will bat an eyelid if it cries – something that should feel quite liberating now we all judge parents so harshly.”

New parents know this feeling very well, when you really want to go to a gig but worry about whether you can get away with taking your baby. You know that it’s quite likely that your little one will just sleep right through but the outside chance that they start to throw the biggest tantrum ever half way through the gig is enough to have you ordering a pizza and putting your feet up with the telly. 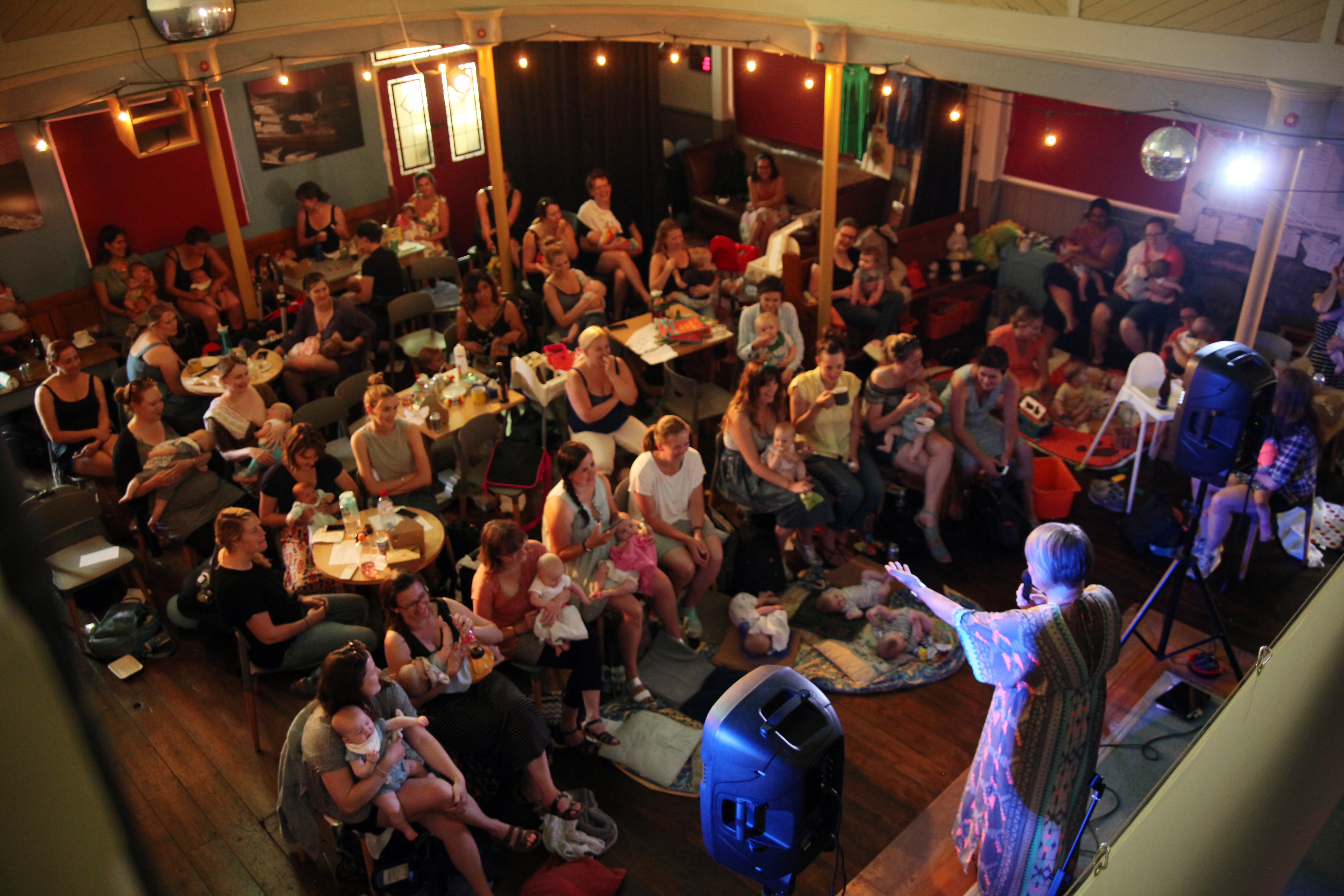 Angie is no stranger to creating great shows, having performed and produced theatre and comedy around the south-west for many years. She explains why she’s starting this new venture: “When you have a baby you still want to be entertained and see great quality shows but now your access to stuff is severely limited in terms of the hours you can socialise, the types of shows you can go to. So I just thought, ‘why can’t we have a comedy gig at a time that suits parents and just let them bring their babies with them?’” 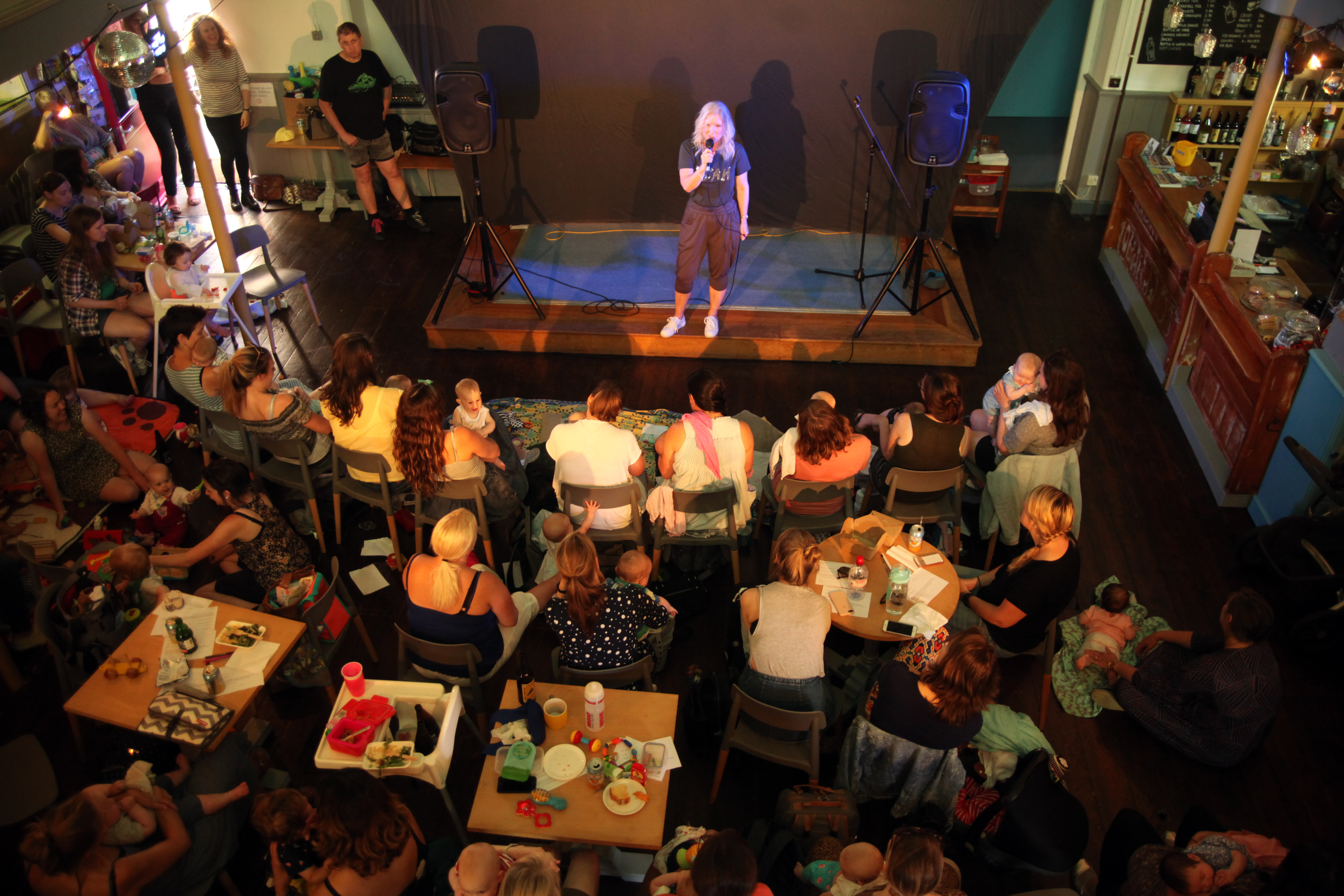 This type of comedy show has been running successfully in London for many years and both parents and comedians are so eager to be part of the action that many venues in the capital now have long waiting lists. “Comedy has for a long time been synonymous with stag parties, raucous audiences and the likelihood of being shamed and berated, when actually comedy can be so much more than this,” Angie continues. “It’s political, clever and inspiring. 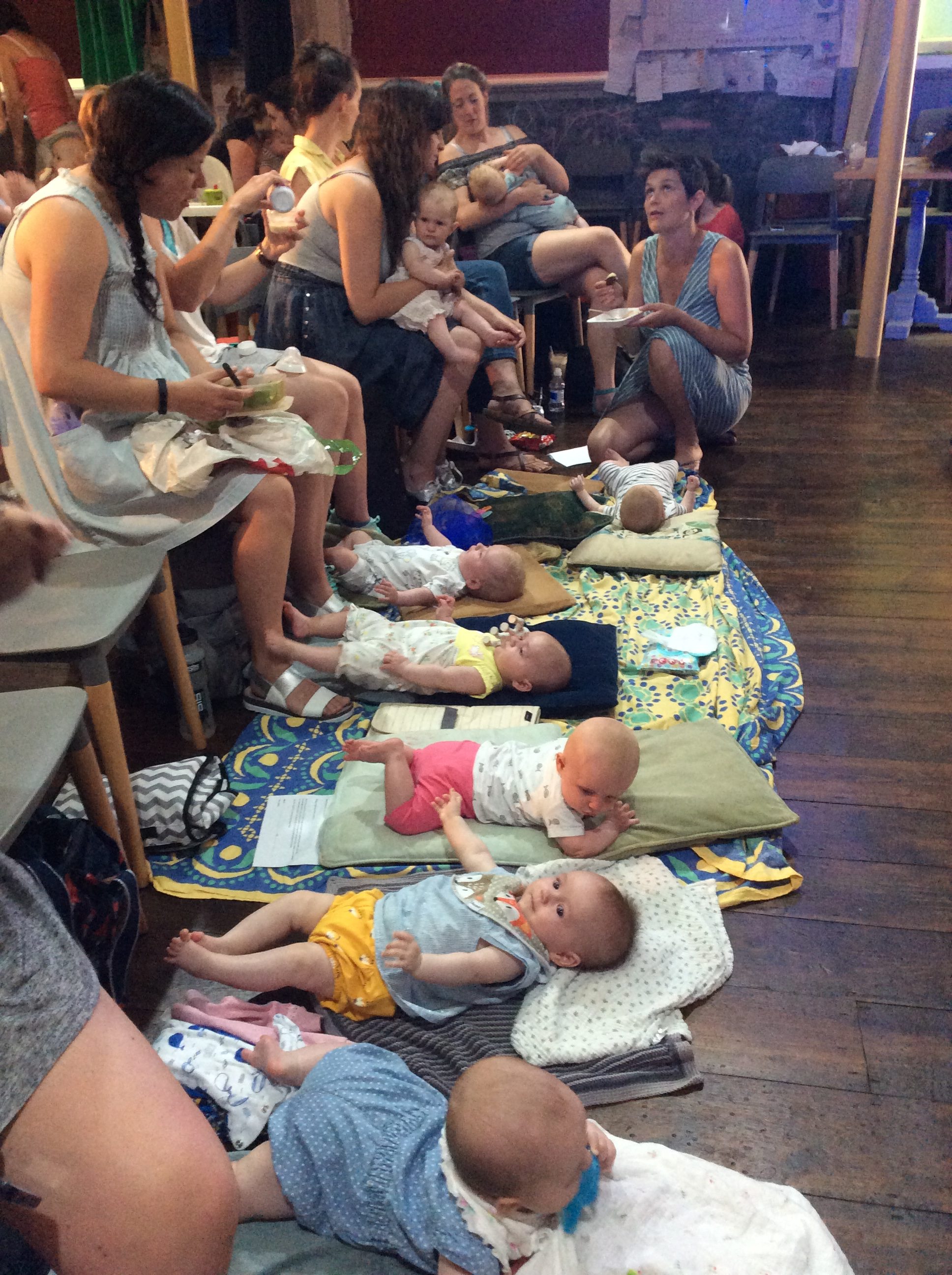 “I’ve known people say that they wouldn’t dream of going to a comedy club, for fear they would be picked on by a comedian or have to deal with drunken audience members. I think we are on the cusp of turning comedy into a more mature, informed and enjoyable choice of live entertainment that doesn’t abuse its public anymore.” 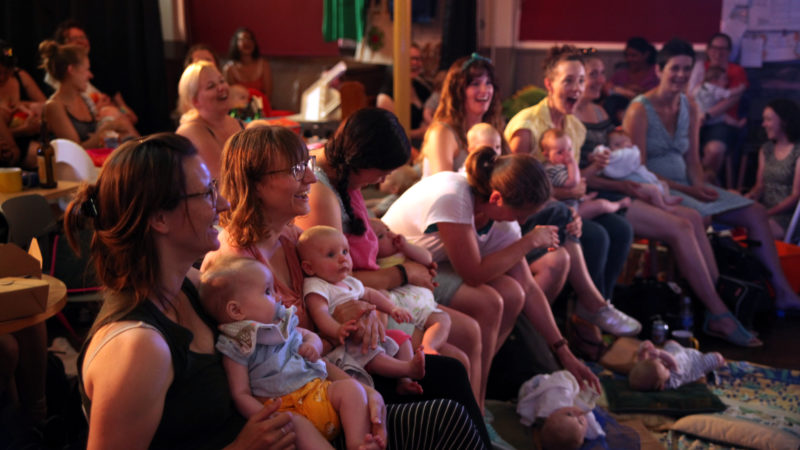 But why, of all the available demographics, choose new parents as your target market? “Anyone who’s had a baby will know the tumultuous journey you experience, as well as the exciting happy role you now embody. You can experience crushingly boring days, not to mention loneliness and post-natal depression, all of which calls for some light relief. I’m hoping that these daytime comedy shows will not only bring audiences back to live comedy, but also make a space for people to meet other new mums and dads and create a dialogue about those scary first few months of being in charge of your new human being.”

The next Daytime (Baby) Comedy Depot takes place at Zion Bristol, Bedminster Down on July 9. For more info, visit www.facebook.com/events/253288648570250

For more details about Angie’s daytime comedy shows, contact her on 07733 298378 / angiebelcher@yahoo.co.uk