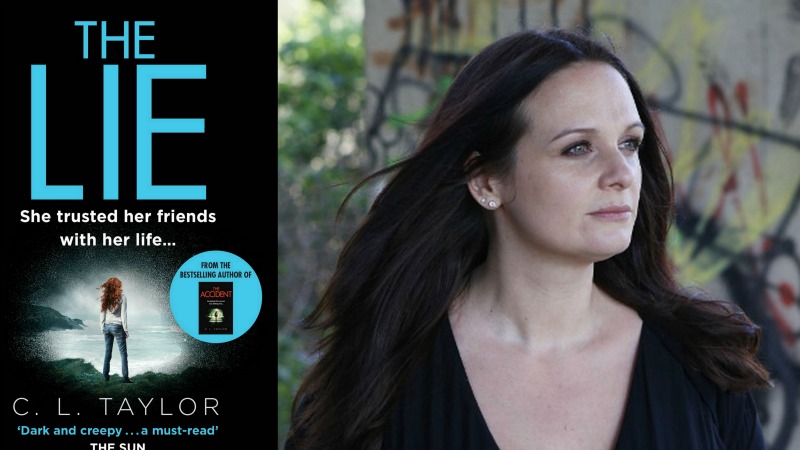 CL Taylor is a Bristol author who wrote her first novel The Accident while on maternity leave and has just had her second novel The Lie published by Avon HarperCollins. Taylor speaks to Bristol24/7 about writing her books being a novelist in Bristol.

You wrote The Accident and The Lie after you became a parent. How did being a parent affect how you felt about writing psychological thrillers?

I do think I’ve become much more sensitive since becoming a parent, particularly when it comes to child and animal cruelty and there are some subjects I’d really struggle to explore in my writing. When I started writing The Accident, about a woman called Susan whose teenage daughter deliberately steps in front of a bus because of a terrible secret she’s keeping, my son was only four months old. I think because Susan’s daughter was so much older than my son I was able to write her story without empathizing so much that I gave myself nightmares.

I don’t think I could write a psychological thriller about a very young boy, or baby, in peril because my son is only three and  it would be impossible to separate my own feelings of protectiveness and fear from those of the character I was writing about. Obviously, as a writer, you do put a part of yourself in every story you produce but some scenarios are just too uncomfortable to write about and I’ve rejected several pretty gripping ideas I’ve come up with because of the subject matter. My current book The Lie is about four twenty-somethings who go on the holiday of a lifetime but end up turning against each other in order to survive. In some ways that book was easier to write than The Accident as it’s about friendship rather than mother/child relationships.

Are your books set in Bristol? As a Bristol writer, what do you bring to your settings that other writers wouldn’t?

The Accident was set in Brighton which is where I lived for 13 years before I moved to Bristol in 2011 and The Lie is set in Wales and the Annapurna mountain range of Nepal. I struggle to write books in settings that I don’t know very well but now I’ve lived in Bristol for almost four years I feel I know the city well enough to write about it. The book I’m writing at the moment, The Forgetting (out in 2016), is set in and around South Bristol, specifically Knowle where I live. There’s quite a suburban feel to the book as it’s another family-based psychological thriller and I hope the readers will get a sense of community and neighbourhood that isn’t always present if a book is set in the urban heart of Bristol. My main character will also be going to Weston-super-Mare and other places that Bristol families might visit together. With any luck, they’ll seem a little spookier in the book than they do in reality.

How do your settings affect your stories?

Setting is hugely important to help create atmosphere in a book. If it’s set in someone’s home environment or neighbourhood you get a sense of who they are, how they fit into the community and how isolated or supported they are within that community. If the setting is foreign to your characters it can really unsettle them. In The Lie the women travel out of their comfort zone to a country they’ve never visited before. Everything is unfamiliar – the scenery, the people and the customs – and, initially at least, they cling to each other while they try to make sense of it. Both of settings in The Lie  are very isolated which allows me to ramp up the sense of danger and suspense.

I’ve noticed on your site that you have put a lot of effort into publicising your book yourself. Do you find that in this climate you need to do a lot of the marketing yourself?

Yes, you do have to do a lot to market your book yourself these days. Once it was enough to rely on your publishers to send review copies out to magazines and newspapers and hope that word of mouth would spread. These days authors have to get actively involved with social media to interact with their readers, build relationships with book bloggers and spread the word about their books.

Are there other Bristol authors you talk to and / or read? Bristol has a history of thrillers – did any of them inspire you to write in your genre?

I’ve got a lovely group of local authors that I meet for lunch four or five times a year. Jill Mansell, Lucy Robinson and Victoria Fox are all based in Bristol and Veronica Henry and Lucy Diamond travel from Devon and Bath to join us. I’ve also recently become involved with Novel Nights which is held in the Lansdown pub in Clifton once a month. Local writers read out short  stories and novel extracts in the first half of the evening and then there’s a Q&A with a published author in the second half.

No, I wasn’t inspired to write in this genre by other Bristol thriller writers. When I started writing my first book, The Accident, the only other psychological thriller that I was aware of, other than Patricia Highsmith’s Stranger on a Train, was SJ Watson’s Before I Go To Sleep. I used to listen to it on audiobook as I’d push my son around Totterdown and Avonmeads in his pram. The idea for my book came when I was pregnant with him. I was shopping in Broadwalk shopping centre when the first line popped into my head ‘Coma. There’s something innocuous about the word, calming almost in the way it conjures up the image of a dreamless sleep.’ I kept repeating it to myself, over and over again as I waddled back home with my shopping and then started scribbling what would become the first chapter into a notebook.

The Lie is published April 23.

For related stories see the Bristol24/7 interview with Jane Shemilt.