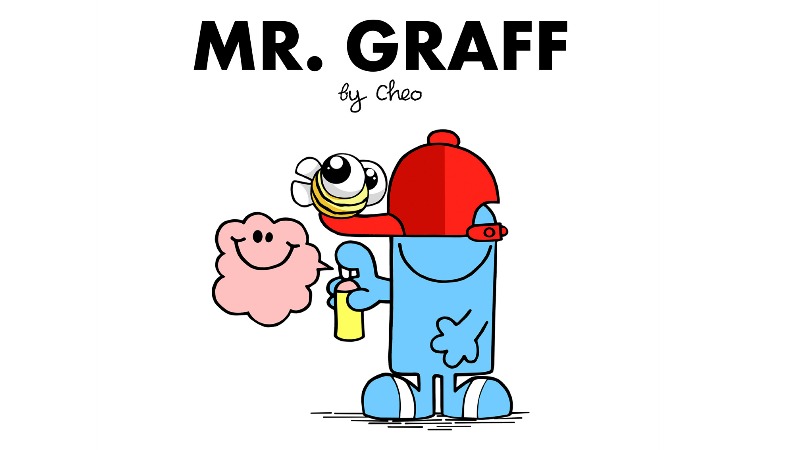 Bristol street artist Cheo has created a new Mr Men character wearing his distinctive red baseball cap as he brandishes a spray can.

Mr Graff has been made to celebrate the 45th anniversary of Mr Men and Little Miss (MMLM) and developed in partnership with Upfest, Bristol’s celebration of graffiti culture that returns to Bedminster from July 23-25.

“It’s a privilege to have been asked by Upfest and MMLM to create Bristol’s very own Mr Graff,” Cheo said. “As a young kid, I remember seeing the name Roger Hargreaves, watching the Mr Men and Little Miss cartoons and reading the books along with every child that grew up in the 70s.

“As well as celebrating the 45th anniversary, it’s also a great accomplishment for the street art and graffiti scene to work with MMLM in doing something so momentous.”

Mr Tickle looks on as Mr Graff comes to life

Sandrine de Raspide from Mr Men Ltd added: “We are delighted to be collaborating with Upfest to celebrate our 45th anniversary and to introduce Mr. Graff.

“Our playful and mischievous characters have brought fun and laughter to generations of families. We love to bring our characters to life in different ways, to entertain our fans and it’s especially exciting to be working with Cheo in the UK’s home of graffiti and street art.”

The new character will be sprayed live along with other favourite Mr Men and Little Miss figures to create a giant mural during the three days of Upfest.

An exclusive limited edition print of Mr Graff by Cheo will also be available as a reward on Upfest’s crowdfunding campaign until May 17.