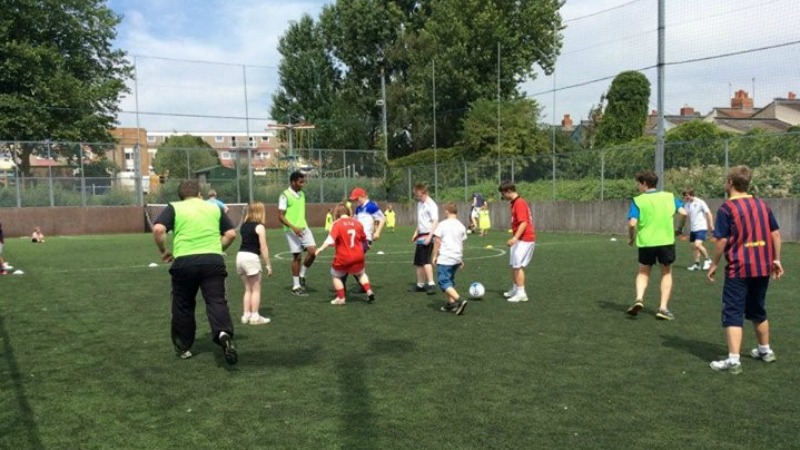 St Paul’s DS Club  is the only football club in Bristol where players with Down Syndrome can show off their skills and, as Neil Maggs discovers, the city is leading the way in promoting disability sports.

The players at St Paul’s DS Club are in the middle of a training session and it’s clear they are not letting their disability get in the way of having a good time .

“I feel brilliant, what’s better than banging footballs in?” said 16-year-old David, who has been coming since the club started two years ago.

“Some days I don’t want to get out of bed mind, but when I am here it’s great. Brilliant, lovely time.”

David has not let his Down Syndrome stop him enjoying sport, but this is not a picture which is reflected nationally.

Sport England recently announced that participation for people with disabilities is down by 121,700. There were high hopes after the London Para-Olympics  in 2012 , but this now feels like a distant memory.

Bristol, however, is one city that is bucking the national trend.  Ignite, a sport initiative for people with disabilities, overseen by charity Access Sport, is leading the way.

The scheme has 10 clubs across the city, has worked with 1400 disabled young people , and has developed 150 coaches in its programme over the last two years.

In St Paul’s the football team has players ranging in age from 8 to 17. The club is run in partnership with DS Active, a national organisation dedicated to getting young people with Down’s Syndrome fit, healthy, and active.

All the young people are running around, kicking balls, having fun, just like any football session, but there is one marked  difference, occasionally someone would sit out on the floor away from the group.

David’s father Tony explained: “With the condition, young people sometimes want to just sit down, watch and go at their own pace. They dip in and back out again. The coach needs to be very skilled and sensitive in supporting this process – he is, that’s why we bring David here.”

Mark was supported to attend disability awareness  courses by Access Sport, and explained the project’s philosophy: “Football is the hook for enjoyment here. It’s not about being competitive, it’s about social and motor skill development. And I have seen huge progress in both areas.”

The Ignite programme oversees sport clubs for people with a range of different disabilities in Knowle, Baltic Wharf, Frenchay, Cotham, Stoke Gifford, and Bedminster among others.

Julia Williams, from Ignite, said: “What is unique about our strategy is that we create  the right environment, up-skill local people to become coaches, and help to overcome barriers like cost and travel.

“Without funded and targeted projects like this, a lot of disability sport would not happen.”

However, the scheme’s two year grant from the Sport England Inclusive Sport Fund has come to an end and they are submitting another bid for funding to keep the scheme going.

Jimmy’s son Ocius plays football  with the club every week. He is concerned what would happen if it stopped.

“It would have a great impact on my son,” he said. “Outside school, this is the only place where he can exercise and learn a skill in a safe environment.”

I surveyed the sports hall, and it dawned on me what was truly special about this. Not only did it offer space for children with Down’s Syndrome for expression and discovery, but also it enabled parents themselves to overcome isolation and connect with each other through their shared experiences. This wasn’t just a sport club, it was a family.

At the end of the session  I asked David what he thought of his coach. ‘Well he doesn’t support the right team he’s Aston Villa,” he said. “They’ll get relegated this year, but apart from that he’s alright.’

Mark smiled and shrugged his shoulders, everyone laughed and made their way out of the Sports Hall.

Let’s hope this ground breaking project doesn’t go the same way as David predicts Aston Villa will. Last month the Premier League sold TV rights for £5.1 billion and now some perspective is required for football to keep its tag as the ‘beautiful game’. Supporting schemes like this would be a start.