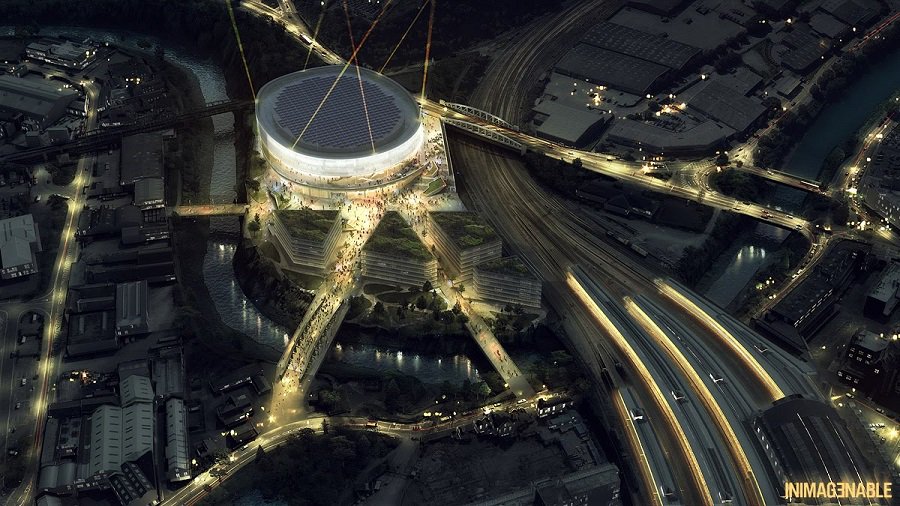 It’s crunch time for the long-awaited Bristol Arena, with Monday seeing both a meeting of the city council’s scrutiny committee and an extraordinary full council meeting with a record number of public statements, followed on Tuesday by a meeting of Marvin Rees’ Labour cabinet in which the mayor is expected to confirm that Temple Island will not be used for an arena, paving the way for an arena at the YTL-owned Brabazon Hangars in Filton.

A cast of people have played big and small parts over the years in the arena story. In alphabetical order, here are just a few of them:

Andrew Billingham
Arena project lead consultant for YTL UK
It is Billingham’s job to work behind the scenes to convince people that the Brabazon Hangars is the best place for Bristol Arena. Billingham was formerly the chief executive of Bristol Sport overseeing Bristol City, Bristol Rugby, Bristol Flyers and the £45m rebuild of Ashton Gate Stadium.

Richard Bonner
President of Bristol Chamber of Commerce & Initiative
As head of the leading voice of business in the West of England and the ‘go-to’ organisation for business engagement by Government, and the wider local and combined authorities, Bonner speaks for some powerful people. He has advocated for a mixed use development to “proceed swiftly” at Temple Island.

Robert Del Naja
Massive Attack
“We need an arena that belongs to Bristol, that is at Bristol’s public transport hub and contributes to city centre life,” said Robert Del Naja on behalf of the group in July 2018. “Something that the city can be proud of, that will inspire future generations of musicians. Rather than going back to square one with an untested plan for a big shed in a car park in the suburbs.”

James Durie
Executive director of Business West
Another influential businessman who sits on the West of England Local Enterprise (LEP) board, Durie was one of the few people consulted in 2013 before Bristol’s then mayor George Ferguson agreed to spend £250,000 on project development costs for the development of an arena on Temple Island. 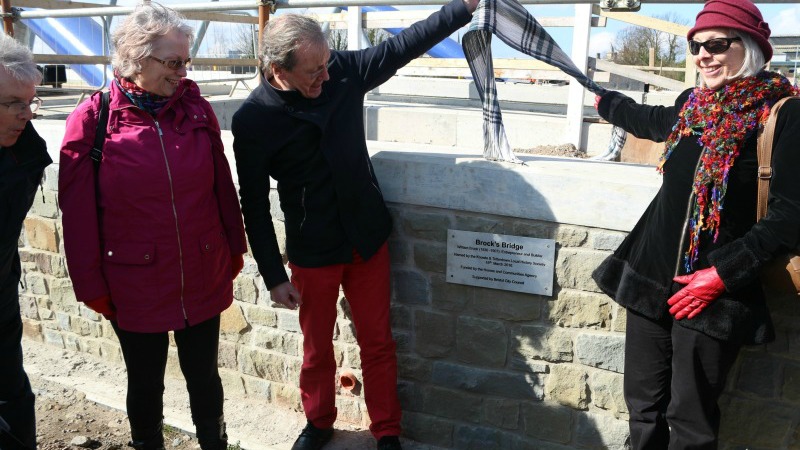 George Ferguson at the unveiling of the name of Brock’s Bridge in March 2016, linking Cattle Market Road to Arena Island

George Ferguson
Mayor of Bristol, 2012-2016
An architect by trade, Ferguson has said that his greatest regret during his time in office was not signing the deal to finally build the arena at Temple Island. Under his leadership, designs were confirmed for an arena and planning permission granted, but concerns were raised about mounting costs.

Geoff Gollop
Chairman of Bristol City Council’s overview & scrutiny management board
Headed the scrutiny committee that earlier this year voted 10-1 in favour of an arena at Temple Island. Gollop has been scathing of Bristol mayor Marvin Rees. He said: “The mayor’s scant regard for the scrutiny process is disappointing to say the least. Frankly this borders on contempt.”

Nigel Greenhalgh
Bristol City Council arena consultant
The man who advised Bristol’s cabinet to scrap plans for an arena at Temple Island was previously employed to work on development of the former Filton Airfield site owned by YTL.

Freyja Handy
Legal counsel for SMG Europe on behalf of Arena Island Ltd
Handy has put in a number of Freedom of Information requests to Bristol City Council, including about YTL’s meetings with Marvin Rees and the hospitality received by the mayor from YTL.

Helen Holland
Cabinet member for adult social care
Marvin Rees’ cabinet lead for the arena project was the only cabinet member in March 2018 to back an arena on Temple Island when it was voted for at a meeting of full council. At Tuesday’s cabinet meeting she could be a rare dissenting voice. 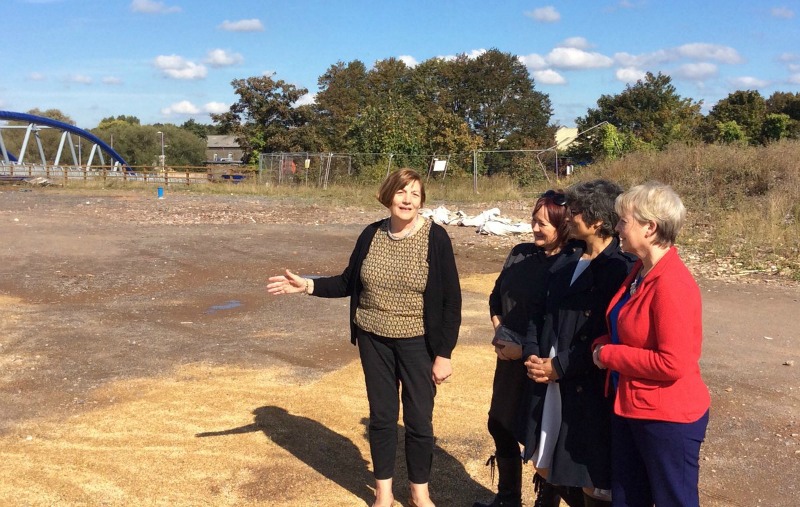 Sir Edward Lister
Chairman of Homes England
As the Homes & Communities Agency (HCA), Homes England previously owned Temple Island and agreed to fund plans for an £11m bridge over the Avon River. Lister is now tentatively supportive of the project moving to Filton.

Barra Mac Ruairí
University of Bristol director of estates and bursar
As Bristol City Council’s strategic director for place, Mac Ruairí was in charge of the arena project. He resigned from the role in 2017 to become the new divisional director of design and development at YTL UK Development, owners of the Brabazon Hangars; and a year later was appointed by the University of Bristol to oversee the management and development of their buildings and grounds, including their new campus on the other side of Brock’s Bridge from Arena Island.

Oran McCloskey
Deputy managing director at Buckingham Group
Buckingham Group are the contractors for Arena Island. At a scrutiny meeting in June, McCloskey said the company could build the arena near Temple Meads for £122m, could “guarantee” his firm would not go over the target budget and that they were “shovel-ready” and could go onto the Arena Island site tomorrow and start doing work.

Colin Molton
Bristol City Council interim executive director of growth & regeneration
Formerly south and south west director of the HCA – which used to own the land at Temple Island – he was appointed by Rees to be in charge of the arena project. It was revealed in June that Molton is paid £1,500 a day in this interim role and only works four days a week.

Guy Orpen
Deputy vice chancellor at the University of Bristol
The university’s new campus will be built on the site of the former sorting office next to Temple Meads, with the KPMG value for money report saying that the reciprocal benefits of an arena at Temple Island would be lessened because of this. “The design of what we’re doing is implicitly tied up with the fact that there is an arena on the other side of the island,” Orpen told the Bristol Post in June 2017. “If for some reason there is no arena on the other side of the island, our design would need to be different and would look frankly silly if it’s constructed with one neighbourhood in mind and we discover we have a completely different one.”

Robert Orrett
Property director at YTL
Orrett was service director managing Bristol City Council’s property assets, where he worked closely on all aspects of the arena project before leaving in 2017 to join YTL.

Marvin Rees
Mayor of Bristol
Rees has often stressed his commitment for an arena in Bristol, but has put the brakes on the Temple Island option since becoming mayor, calling it an “undeliverable vanity project“. In March 2017, he commissioned an independent review into the project’s value for money which he later extended to include alternative locations, naming the Brabazon Hangars as an official alternative site in January 2018.

John Savage
Chairman of Destination Bristol
One of the last figures to enter the debate, the well-connected business leader wrote in Bristol24/7 in August that Bristol “can truly eat our bun and keep our penny” if Temple Island is regenerated by a private firm and an arena built by another private company elsewhere.

John Sharkey
SMG executive vice-president of European operations
Live Nation and venue operator SMG Europe were awarded the contract to operate Bristol Arena at Temple Island in July 2016. Speaking to Music Week, Sharkey said that Bristol Arena will be “one of the most exciting arenas to open in the UK for a long time”.

Colin Skellett
Chair of YTL UK
As chair of the West of England LEP, Skellett agreed in 2014 to give Bristol City Council £53m towards the cost of the arena and associated infrastructure at Temple Island and the wider site. It is this money which will be spent elsewhere if an arena is not built in the city centre. Skellett was arrested in a dawn raid in 2002 at his home in Bath on suspicion of accepting a £1m bribe during a £1.2bn takeover of Wessex Water by YTL, but was cleared of all charges.

Kevin Slocombe
Head of office to the mayor of Bristol
According to many observers the power behind the throne at City Hall. Jeremy Corbyn’s former head of media is believed to be a fan of an arena at Filton. He recently tweeted about “the fake smears, outright lies and made up arguments that many people are using to defend a weak argument” over building Bristol Arena at Temple Island.

Nigel Wilson
CEO of Legal & General
Legal & General revealed an alternative vision for Temple Island in August, featuring a conference centre, hotel, 550 homes and two large office blocks. Wilson said: “Our vision for the Temple Island could deliver a much-needed new quarter in Bristol, with the conference centre it needs to attract events and delegates from around the world, whilst also generating employment opportunities and economic growth.”

Stuart Woods
Bristol City Council arena project manager
Responsible for the day to day running of the arena project, Woods is the co-author of the report to cabinet on Tuesday that recommends a mixed use site at Temple Island is more preferable than an arena.