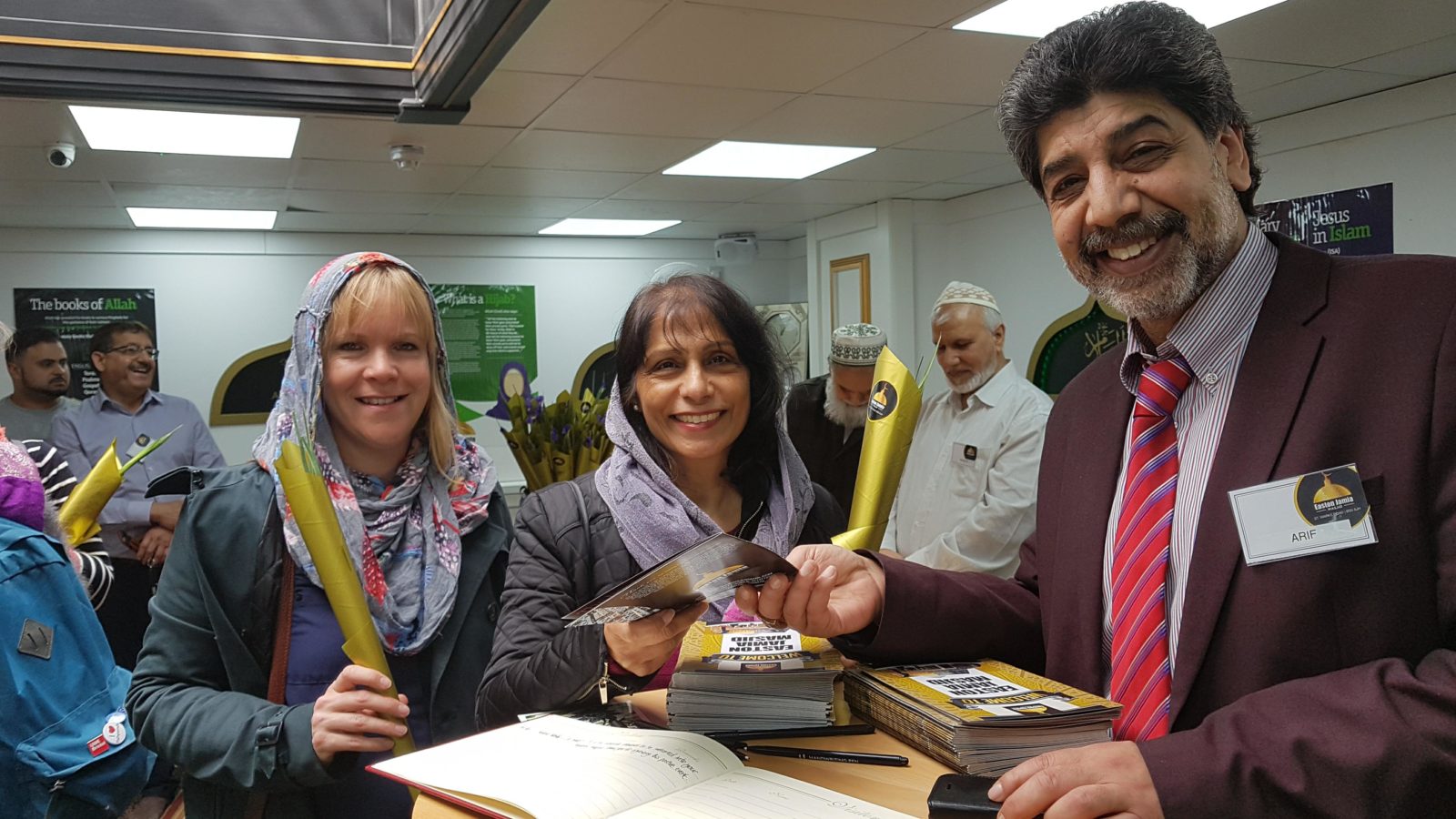 “Don’t forget your flower,” says Arif Khan, stretching across a table laden with sweet and savoury treats to hand over the parting gift.

He has, along with others from the Easton Jamia Masjid community, spent the past few hours welcoming people from across Bristol into the mosque on St Mark’s Road to share food, flowers, friendship and stories.

Children run across the soft, plush carpet while adults stand or sit in small clusters, chatting over snacks and cups of tea, as more visitors drift in – each pausing at the door to shed their shoes – before wandering in to see inside the impressive gold-gilded building. 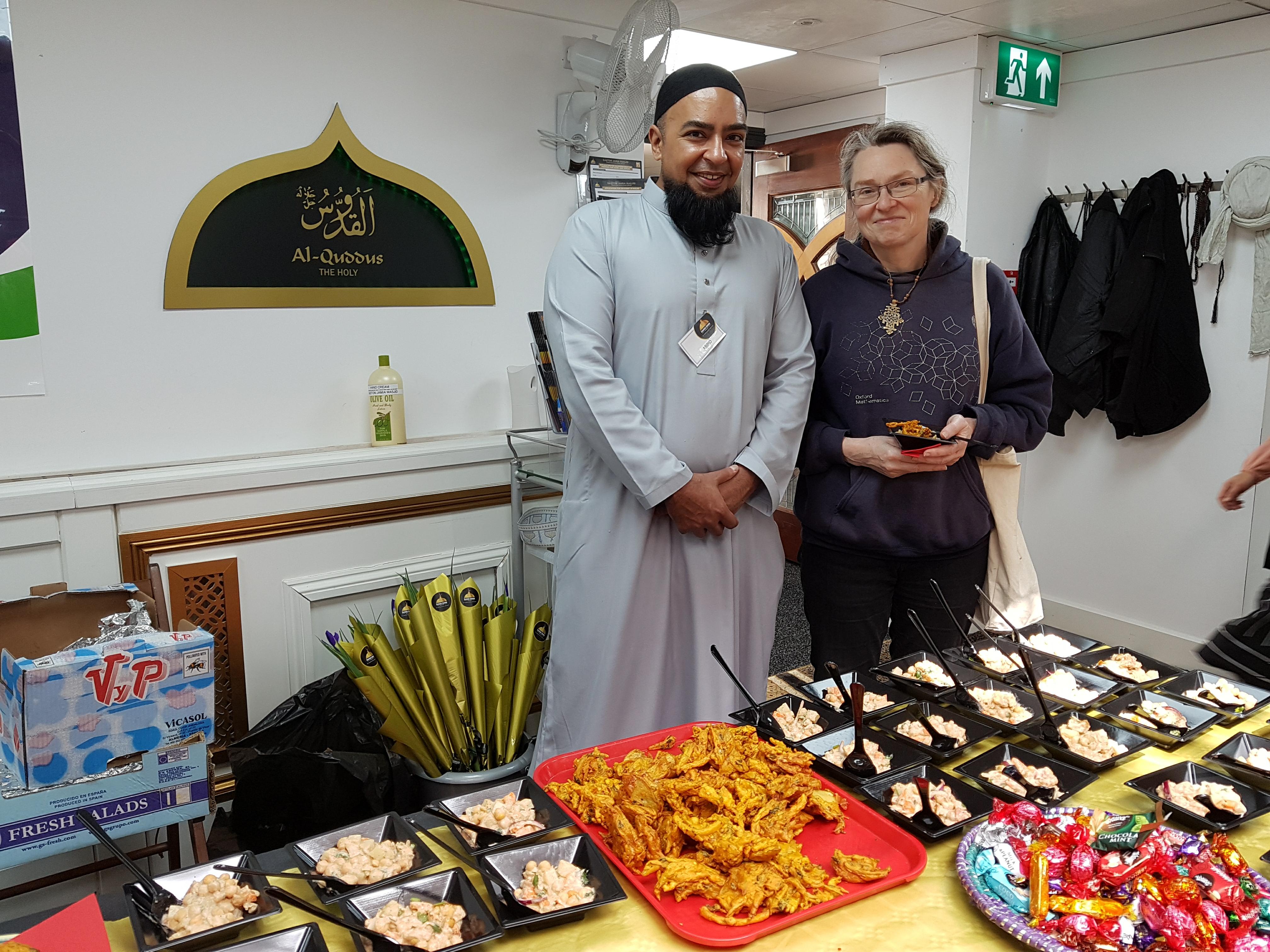 “The chickpeas are delicious,” remarks Miranda Mowbray, tucking into a bowl while she speaks to mosque member Abbid Hussain.

Like many visitors, she has turned out for the ‘Love Thy Neighbour’ event on Tuesday to show solidarity with the Muslim community in the wake of letters sent to some households around the country by far right groups seeking to incite hatred.

“As a Christian, I believe that Muslims are my brothers and sisters.,” continues Miranda, adding: “I have also often walked past the mosque and it’s a nice opportunity to see inside.” 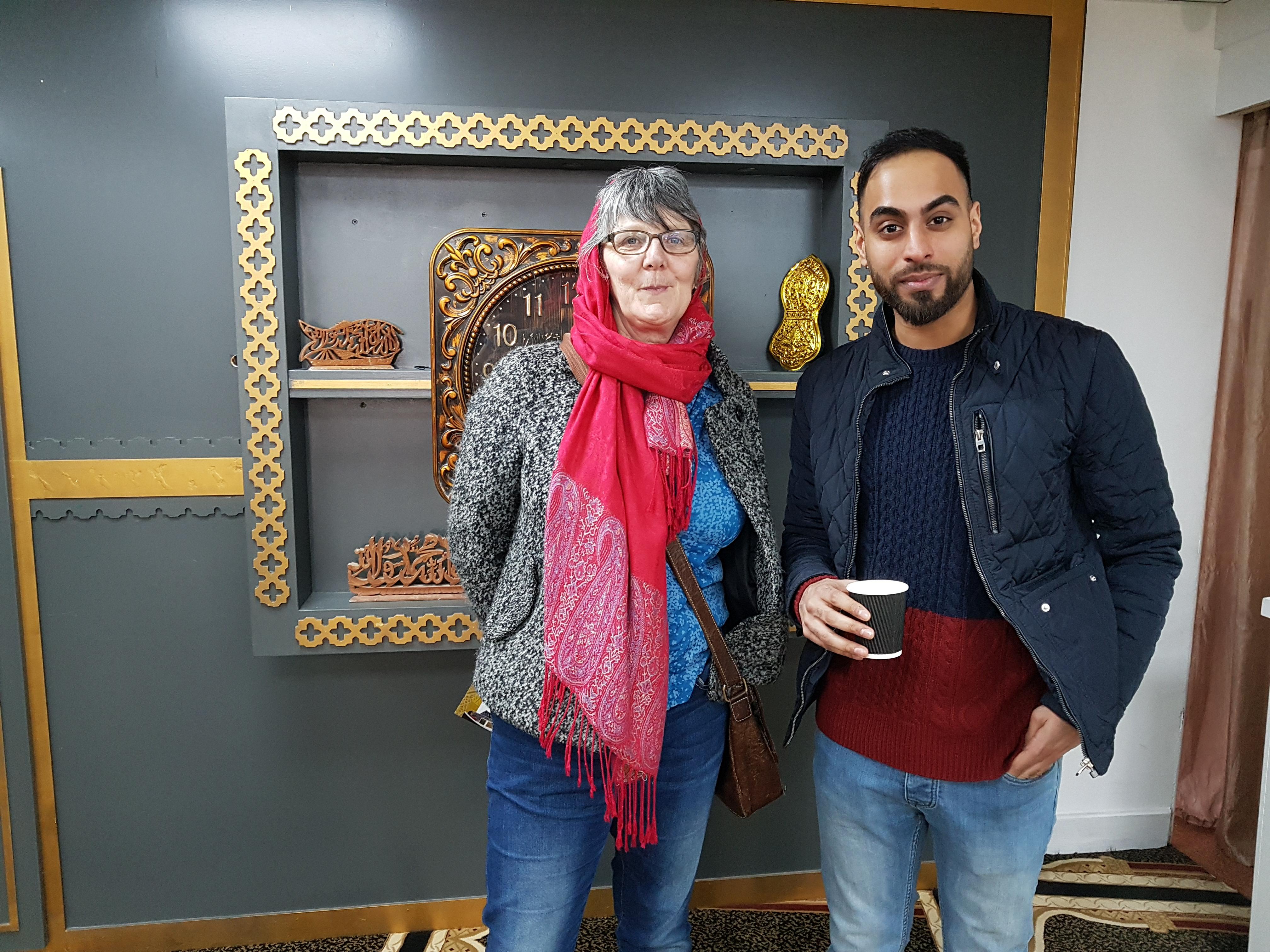 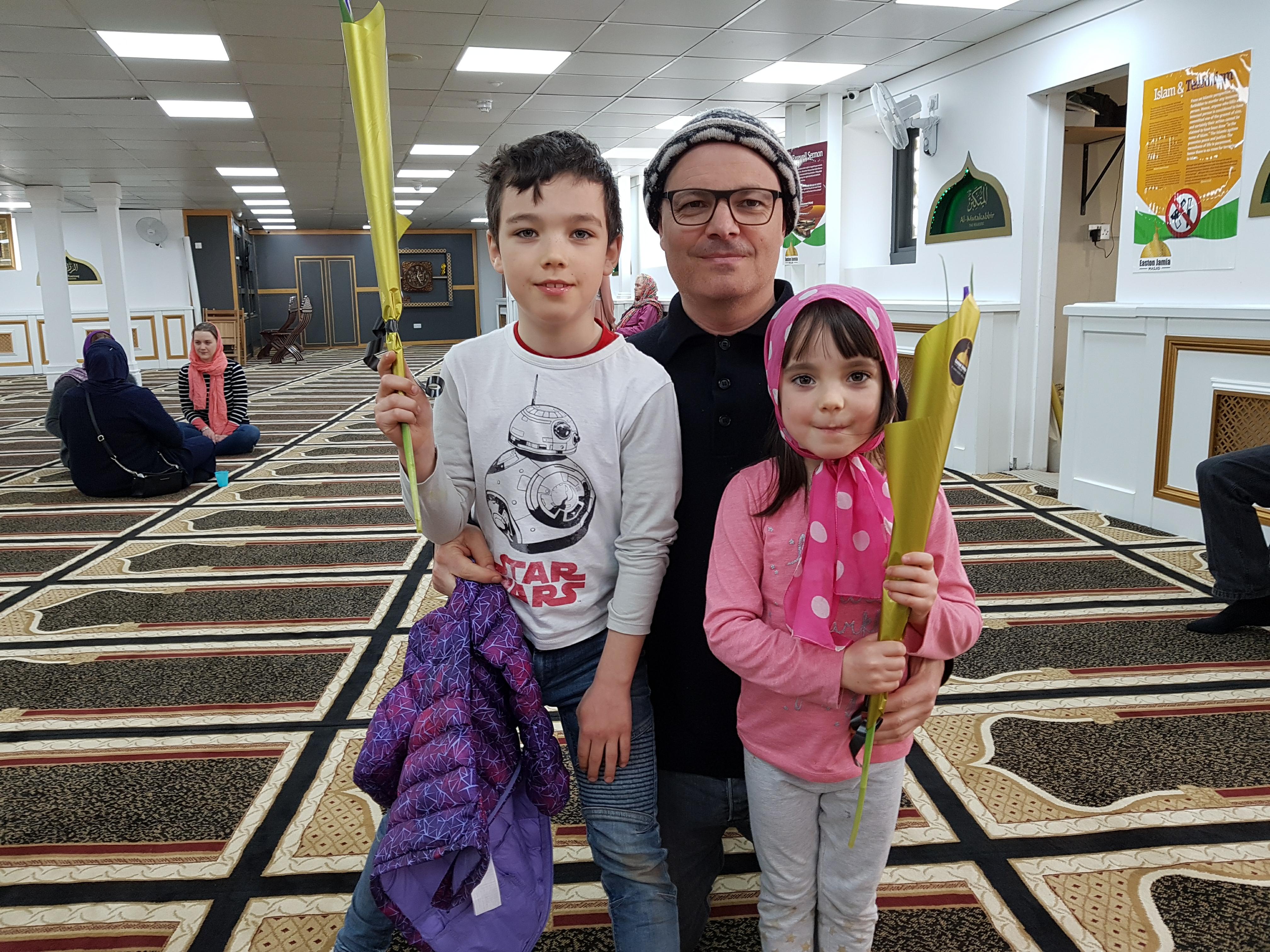 “I live in Easton,” says David Marks, who has popped in with his children George and Mary.

“There are a lot of different cultures here and we are all about that mix being harmonious and peaceful. It’s really important to bring the family along so they just accept everyone here as part of the community.”

While some people are local, others have travelled from across the city to visit the mosque – curiosity to see inside the building proves to have been a big draw for many visitors, but it’s the warm welcome that each person comments on when they come to leave. 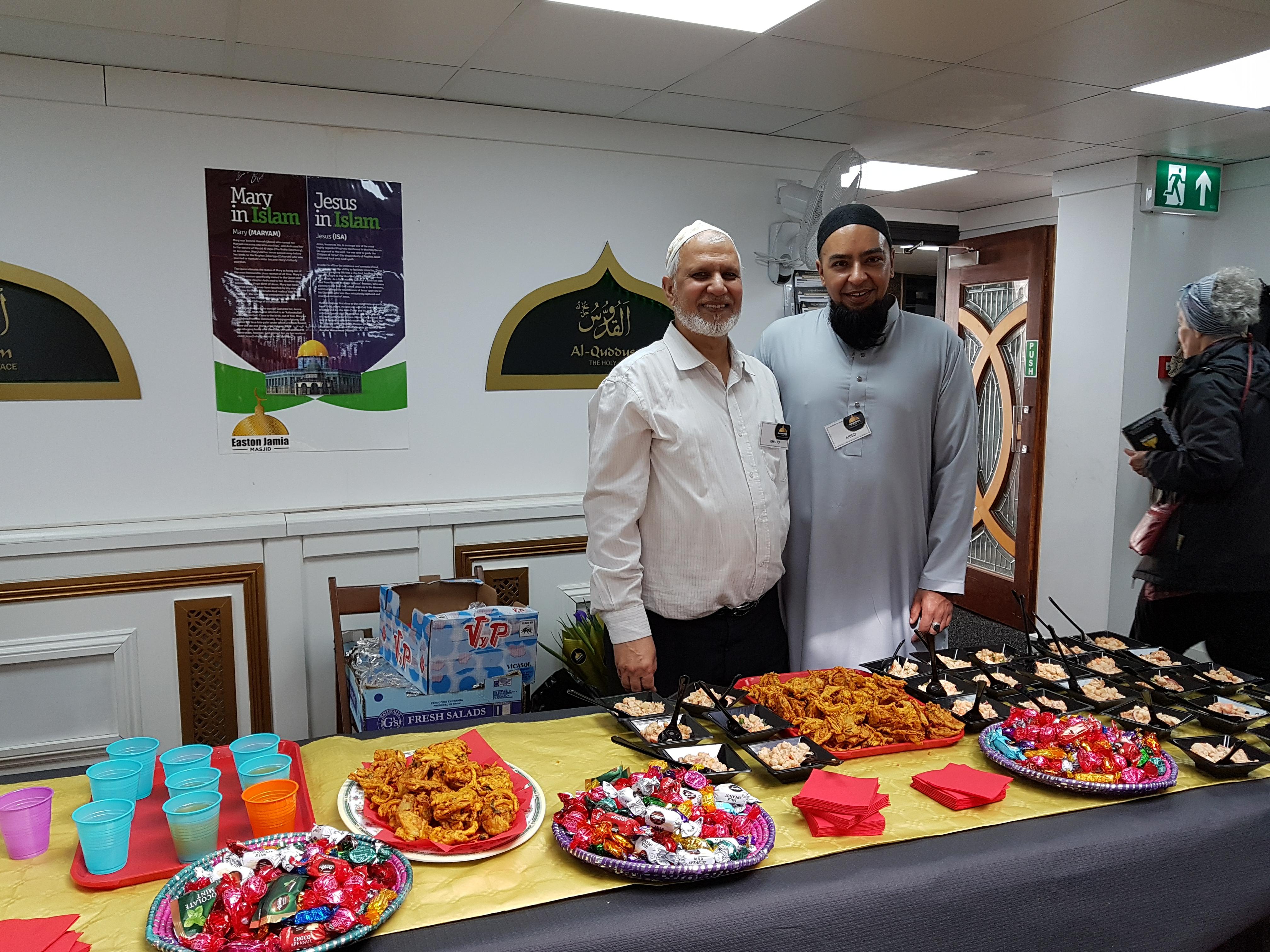 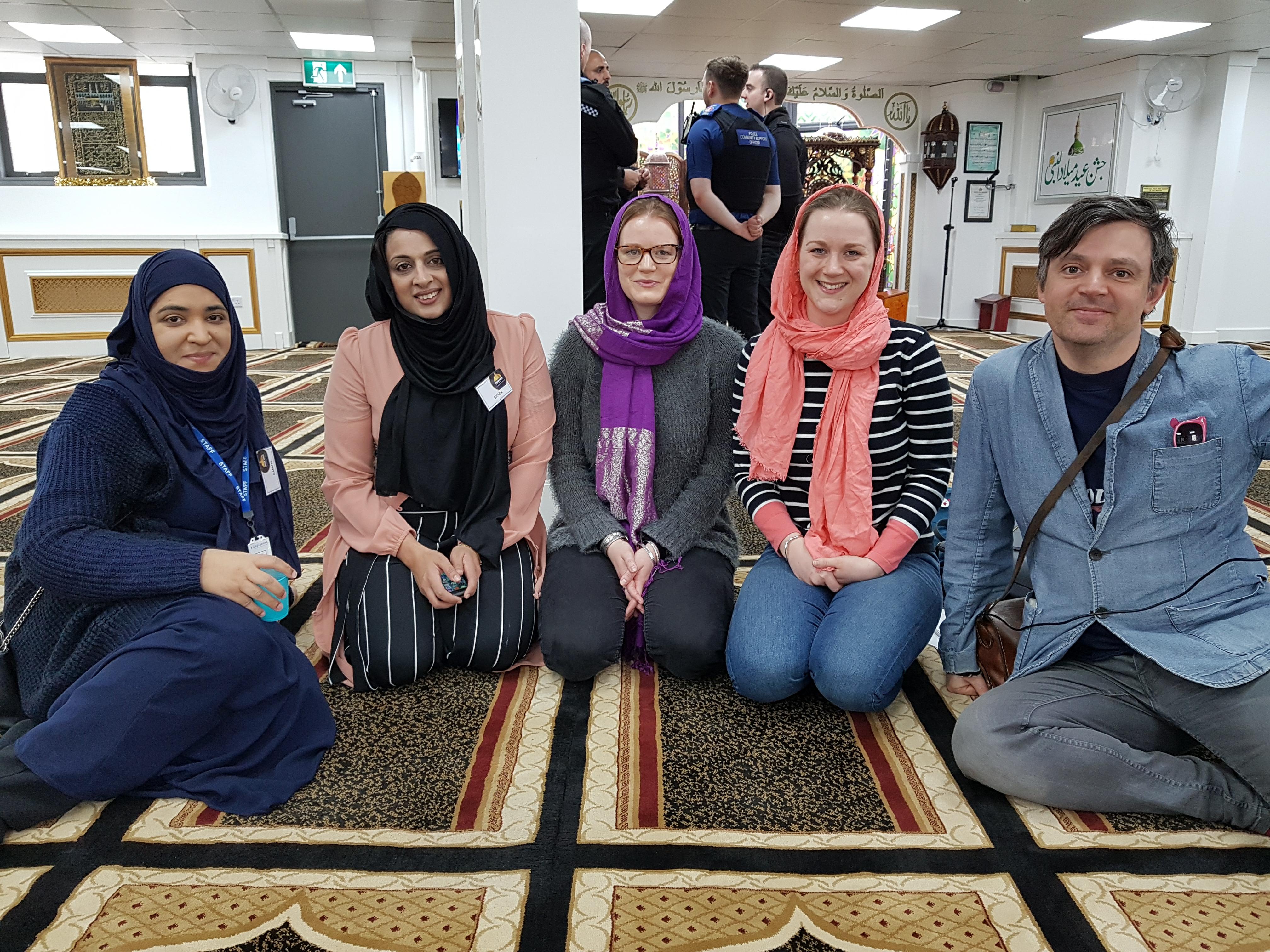 “It’s important to open our doors and respond with peace and love and show that hate and violence are not accepted in our community,” Shazia Malik tells Bristol24/7.

“Initially when we saw the letter being circulated in other parts of the country, I did feel a little bit fearful. But we realised that it’s such a small minority of people behind them.

“We thought we should respond to the community in the way they respond to us and show solidarity and support – it’s important for us to embrace that.” 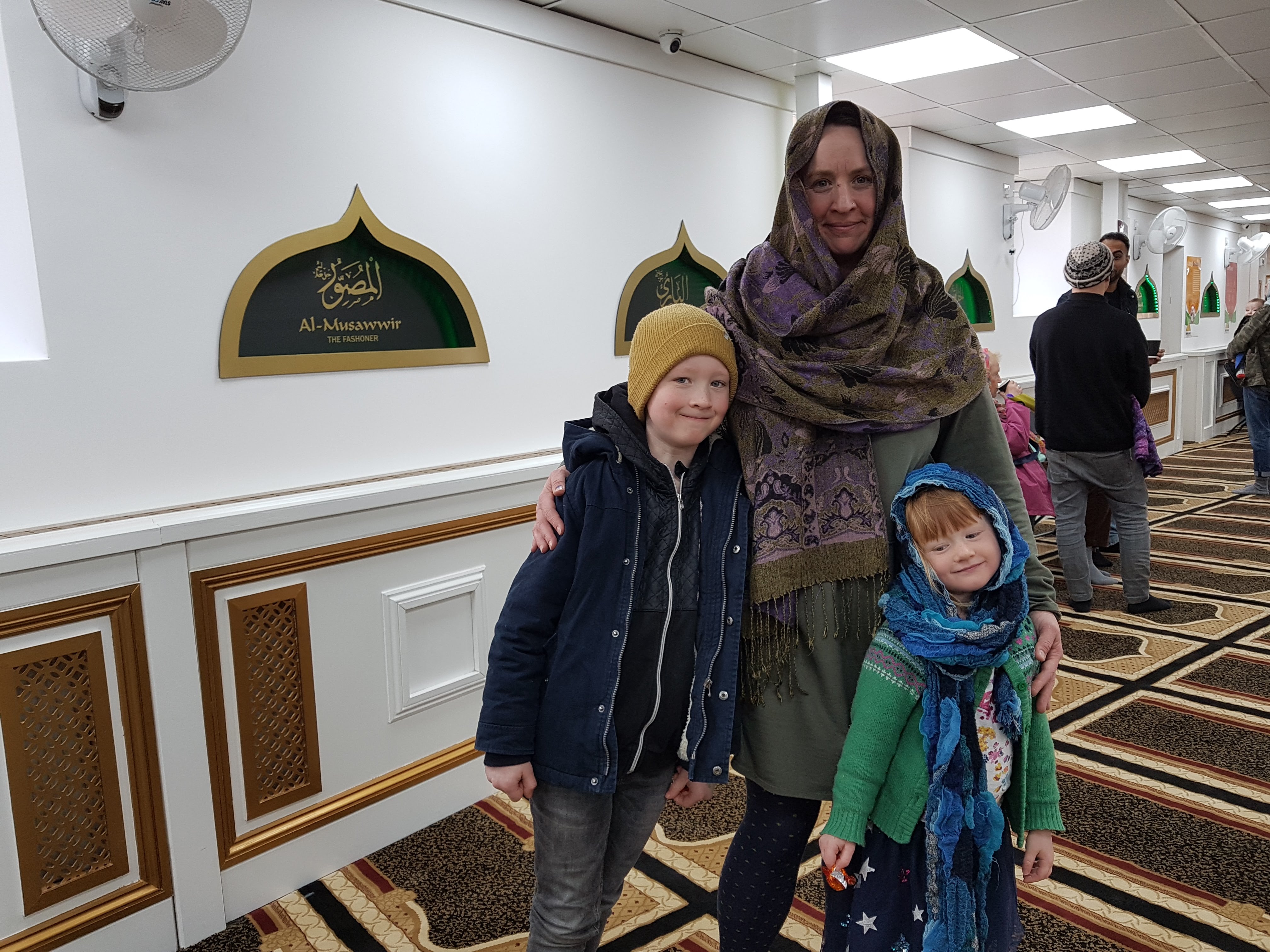 Teacher Sarah Jane Power, visiting with Charlie (8) and Esme (4), says she travelled over from Thornbury in order to educate her children about Islam 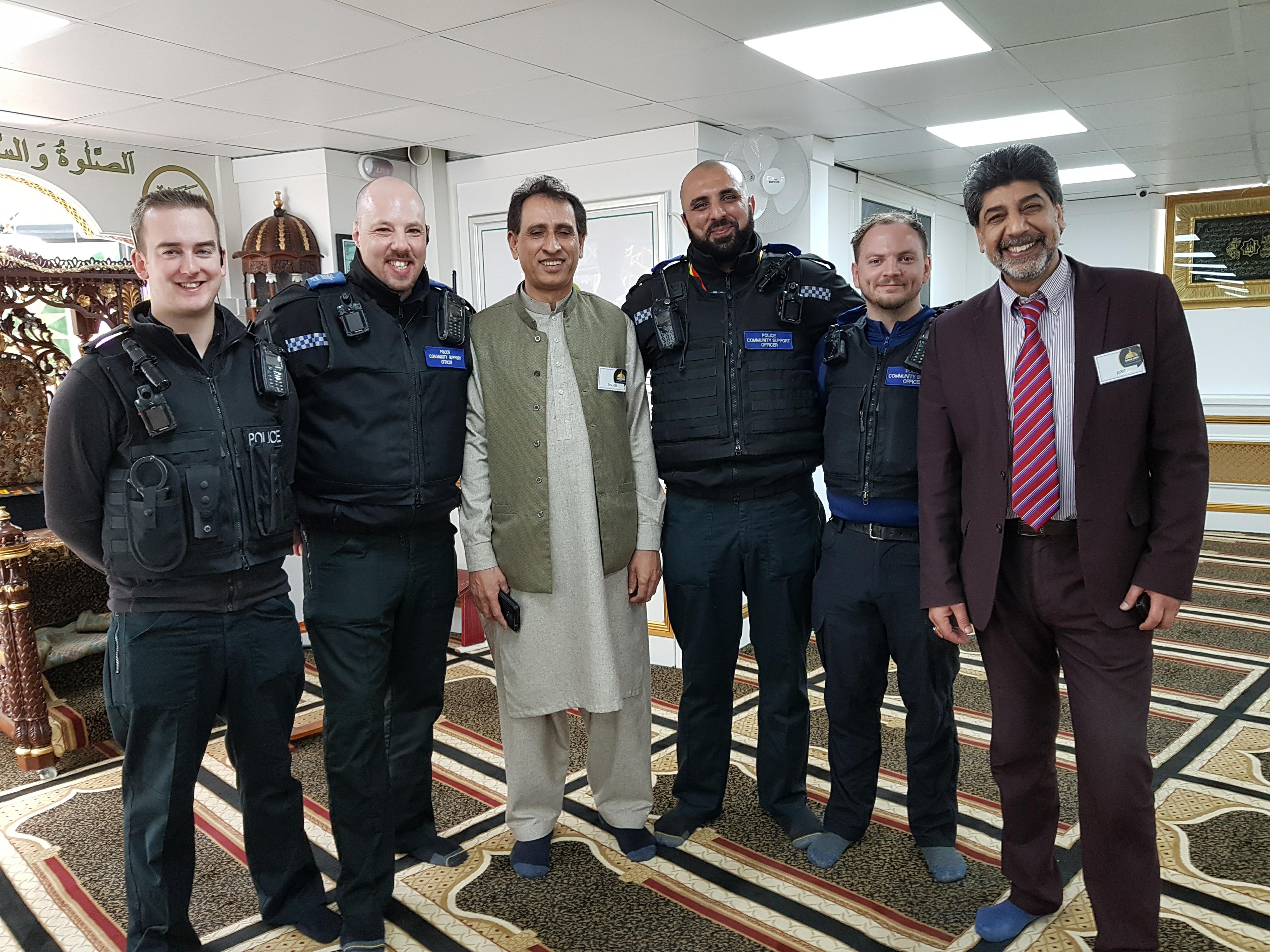 Laughter can be heard in the corner, where Easton’s neighbourhood police team are talking with two mosque members.

“We are always on the beat anyway, so we’ve come in for this community event,” says PCSO Mohamed Berber.

“It’s also an education to my colleagues about my culture,” he adds, with a smile. 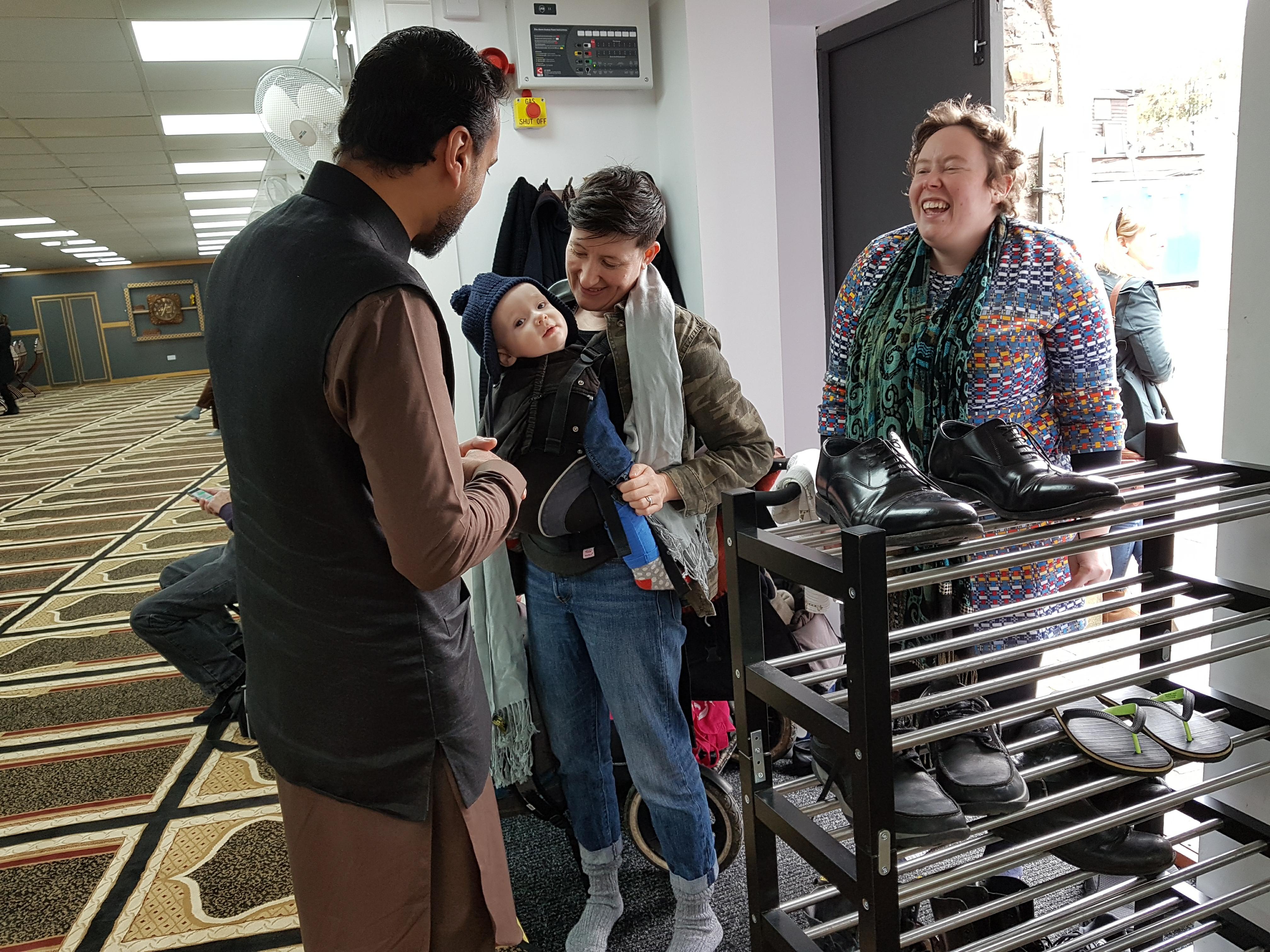 Abdul greets Claire Nicholls. with baby Cooper, and Nicolette Jones as they enter the mosque

Abdul Malik, chair of the mosque’s management committee, says he is overwhelmed by the positive response to the ‘Love Thy Neighbour’ day.

“Nobody has talked about the letter, which in itself is proof that people can rise above this type of hate, particularly in Bristol because we have got so many positive minds,” says Abdul. “I’m proud to live in a city that thinks this way.

“If we can make people feel welcome in our mosque, that’s the key to having good relationships. Whether it’s mosques or churches or synagogues, the more we open our doors and share what we are doing, the better.

“It’s about humanity and breaking down barriers and stereotypes.” 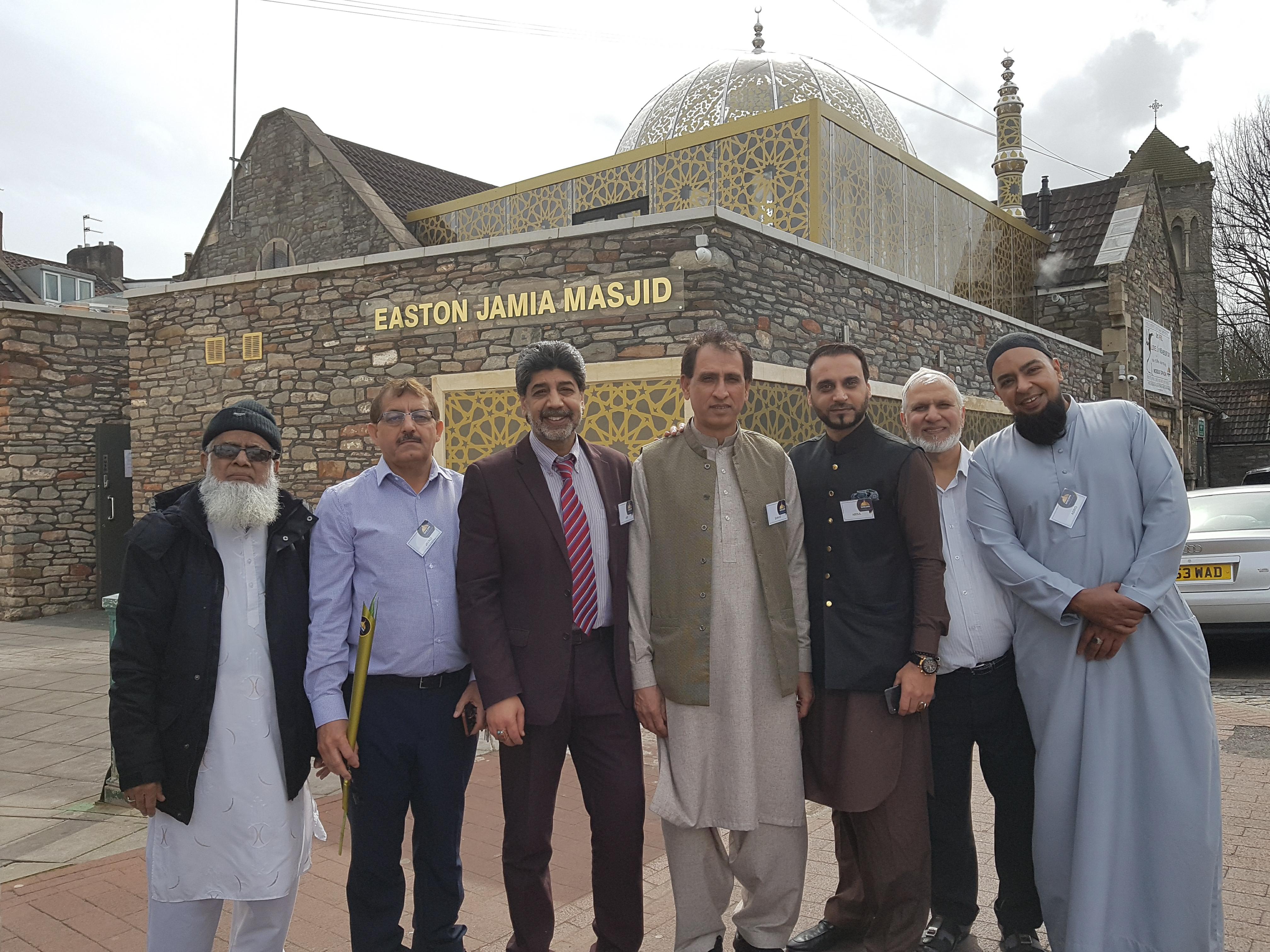