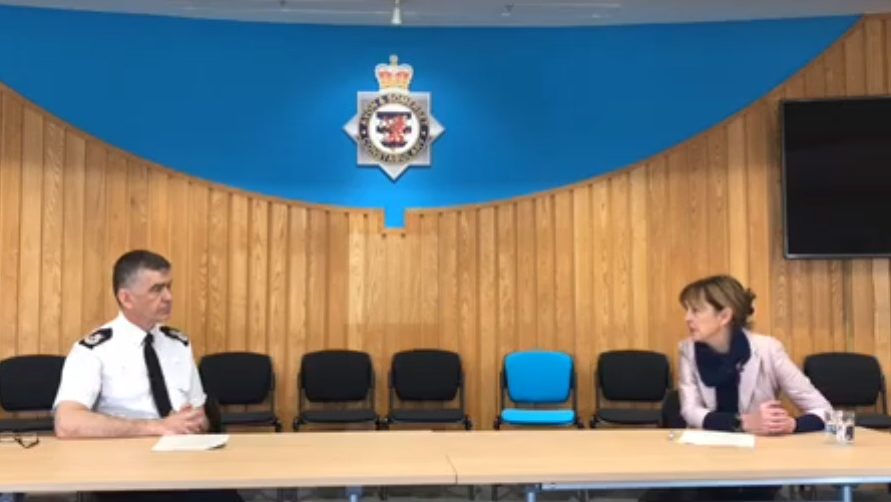 A man who drove 100 miles to see his girlfriend is among the 23 people fined by Avon and Somerset Police for defying “sensible advice” during the coronavirus lockdown.

Chief constable Andy Marsh said the force is not enforcing the new rules unnecessarily but to “help the whole of society get out of this crisis as quickly as possible, with as little loss of life as possible”.

The vast majority of residents are complying but six of his officers have been bitten, spat at or coughed on by people claiming they have coronavirus.

The offenders will be prosecuted.

Speaking during a Facebook Live with police and crime commissioner Sue Mountstevens on Tuesday, March 31, Marsh said: “Many of our neighbourhoods and towns are deserted. There’s a tremendous amount of compliance.

“People understand we need to stop the transmission of this disease. On behalf of the police, thanks for complying. Hopefully, this is a step in the right direction. We’re all on the front line of this. We can all stop the spread of this virus.

“One of the roles of police officers and PCSOs is to explain what the regulations are and to encourage people to comply.”

PCC Sue Mountstevens puts your questions about covid-19 and policing to Chief Constable Andy Marsh. If you have any further questions for the Chief Constable please let us know. The next Facebook Live will be on Friday 3 April at 12:30pm.

“None of them were in grey areas. One was for someone who’d driven over 100 miles to visit his girlfriend.

“[In another case] four people who weren’t in the same household were out in a car. They refused to go home.

“Most of the tickets are where people are refusing to take sensible advice. People who are using common sense, supporting vulnerable people, buying essential food, exercising – all of those things are very straightforward.

“Over the weekend, six officers were bitten, spat at or someone coughed in their face, saying they had COVID-19 in an attempt to evade arrest or provoke them.

“None of these assaults happened during the enforcement of the coronavirus regulations. They all happened behind closed doors, usually domestic violence type incidents, and usually with alcohol involved.

“Some of those involved admitted it and said they were sorry.

“These are shocking incidents. It’s bad enough doing a dangerous job, let alone being assaulted and fearing you may be infected with what is a horrible and unpredictable virus.

“It’s worrying for the officers. We treat them as victims of crime. We prosecute the offenders and offer the officers every support to get back as soon as possible, which is what they want.”

Marsh also issued a warning about fraudsters who are trying to exploit the situation – by proffering fake cures for coronavirus or trying to sell personal protective equipment that does not exist, at vastly exaggerated prices.

He added: “If people want to report something they think is in contravention to the regulations, we’d rather they didn’t call 101.

“We’ve got a lot of police officers and PSCOs in communities. We’re mapping any regular breaches. We probably don’t need people to tell us where these regulations have been breached.”

Breaches can be reported online at www.avonandsomerset.police.uk/report/breach-of-covid-19-restrictions.

Marsh added that if a crime is being committed, people should call 999.

There will be another Facebook Live at 12.30pm on April 3.