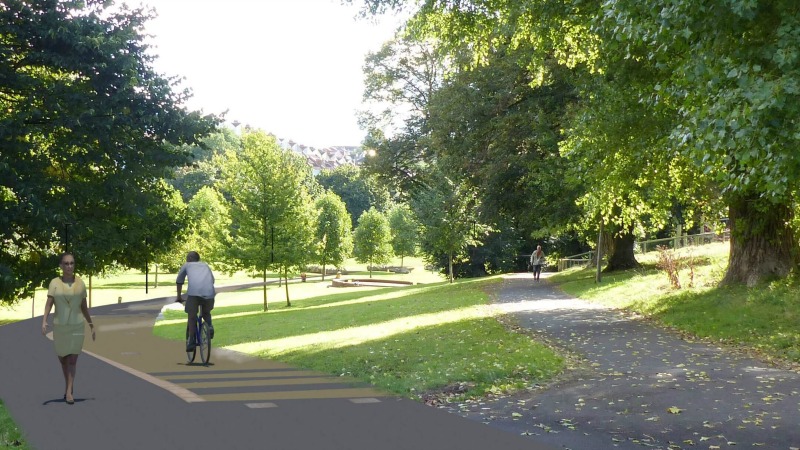 “It is one of those win-win situations. It passes a school and is perfect for encouraging children (and adults) to cycle and walk in safety.”

The proposed route through Victoria Park running near Hill Avenue

BCC claim that despite the positive benefits of the new route there are “well organised objectors who are determined to stop this cycleway”, such as the Victoria Park Action Group (VPAG) and Totterdown Residents Environmental Social Action (TRESA).

BCC even go so far as to say that VPAG “have been co-opted by a fundamentally anti-cycling group whose true agenda is shown by their name, FOG (Filwood Opposition Group).

“FOG, under the guise of VPAG, have been effective at distributing selective information, which is designed to mislead and resulted in a disproportionate and unrepresentative number of negative comments on the application so far.”

This is an accusation that VPAG strongly refute, and say that is with “regret” that they cannot support the scheme in its current form.

Founding member Andrew Campbell, a 54-year-old firefighter who lives on Hill Avenue, told Bristol24/7: “”Most of the members of the group are cyclists ourselves, so to say that VPAG has been co-opted or influenced by an ‘anti-cycling lobby’ is not only completely untrue, it is also quite insulting to a group which is long-established and has a very clearly defined role and remit in the park.

“It is a deliberate smear against VPAG’s name and an attempt to denigrate our arguments by casting us as ‘antis’.”

BCC appreciate that some objectors worry about the route between St Luke’s Road and St Mary Redcliffe junior school, used by schoolchildren, with concerns about the amount of park perimeter space taken up.

But the group do not believe that there is a better solution to what is proposed, with an earlier plan to take the cycle route under St Luke’s railway bridge ruled out due to local opposition.

BCC also have some sympathy with the objections to the route along the edge of Victoria Park by Hill Avenue.

“A cycle route fully segregated from motor traffic along Hill Avenue might be an (less suitable) alternative, but could only be done by removing on street parking,” the group say.

“Hill Avenue isn’t pleasant with cars parked either side and single file traffic so people on bikes keep stopping to let cars through, and then there’s the ramps. Many currently prefer to use that over going through the park because it’s flat, there are no barriers to negotiate and there are fewer pedestrians.”

The scheme designers are also proposing segregated cycle and pedestrian paths through the park.

“The objectors are saying that a wide path has the feel of a road, and is a bad thing,” say BCC.

“This is a fundamental design question for cycle routes in parks. In the royal parks in London, they have done away with segregated paths, on the basis that they encourage higher cycle speeds.

“We do not think there is a ‘right’ design answer, but it is down to users being considerate and a design that enables this to happen.”

Bristol City Council cabinet member for transport Mark Bradshaw said: “Victoria Park is an important, well-used and much-loved space for the community and the wider area, which is why the council is keen to invest in improving access for people walking and cycling.

“The proposals will also deliver some long held community aspirations for enhancing safety, fixing recurrent flooding problems and making it easier to enter and leave the park.”