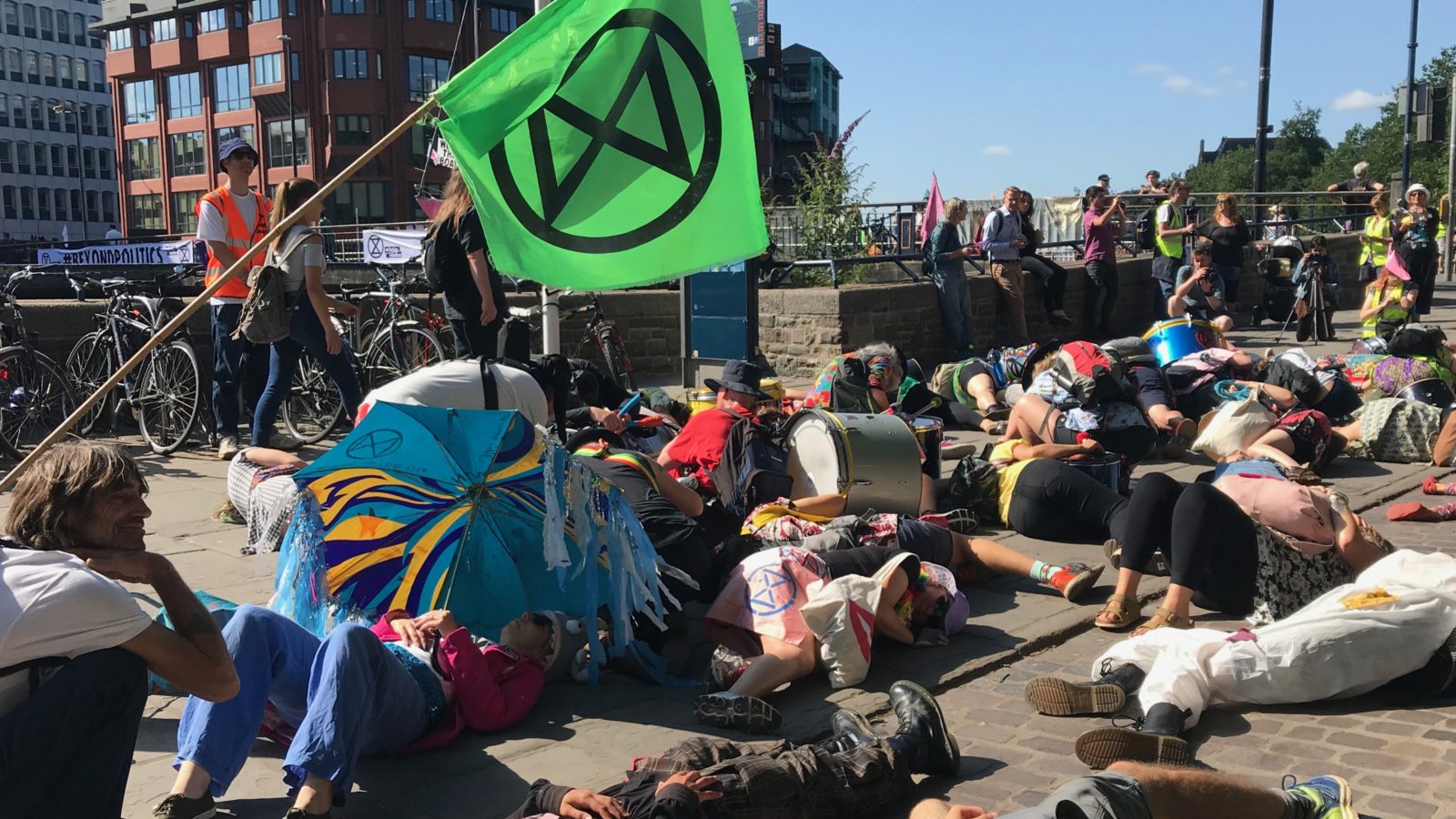 This week, hundreds of non-violent protesters are gathering in central Bristol to call for action on climate change. Among the protesters are families, students and pensioners from in and around the city.

We spoke with some of the individuals taking part in the uprising’s first day:

Rachel Cracknell
Rachel, 38, lives in Easton. She has joined the protest with her three-month-old daughter, Betony. 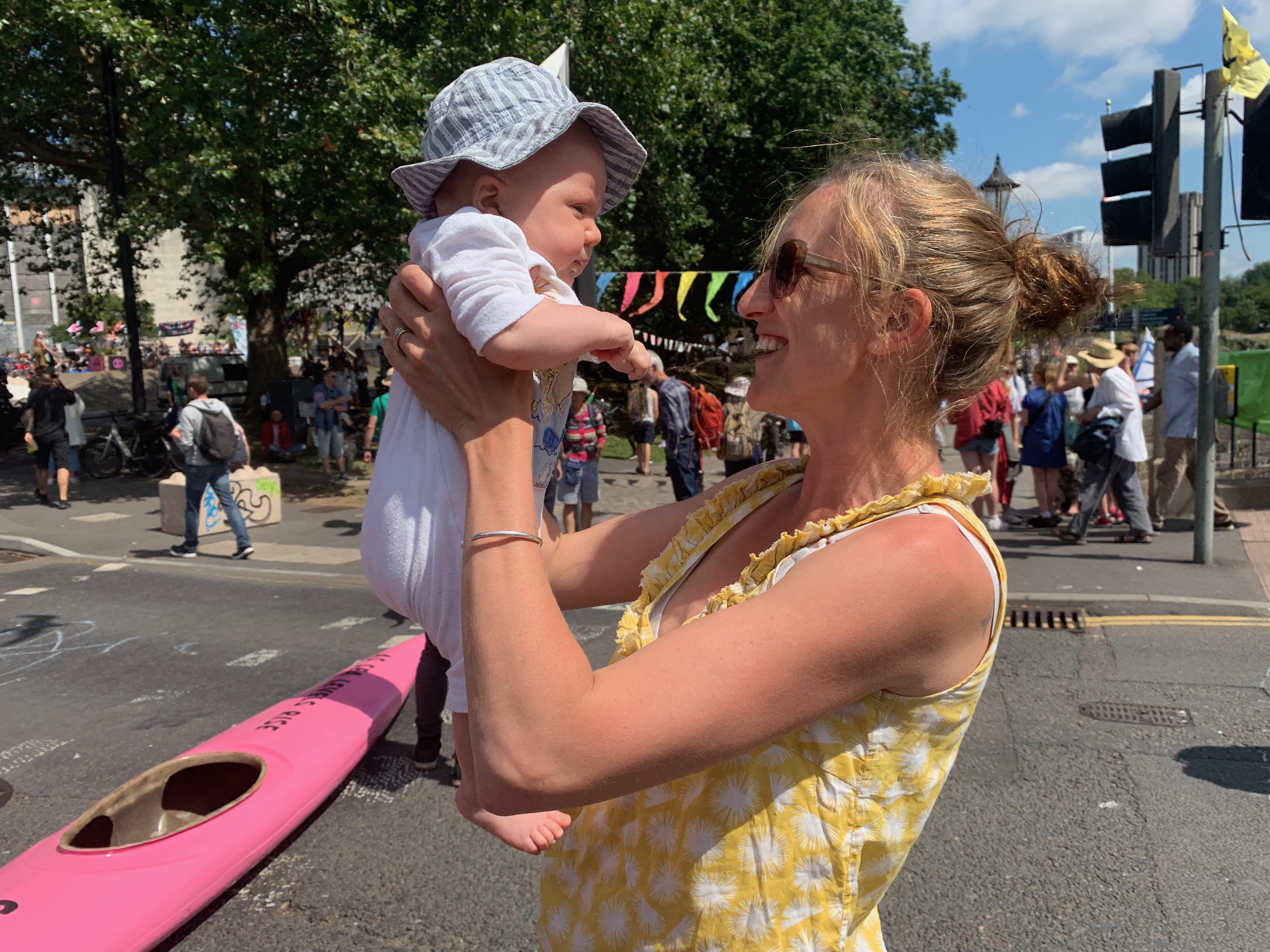 “It’s such an important moment. We really want to act now to ensure the planet is able to provide for our children.” 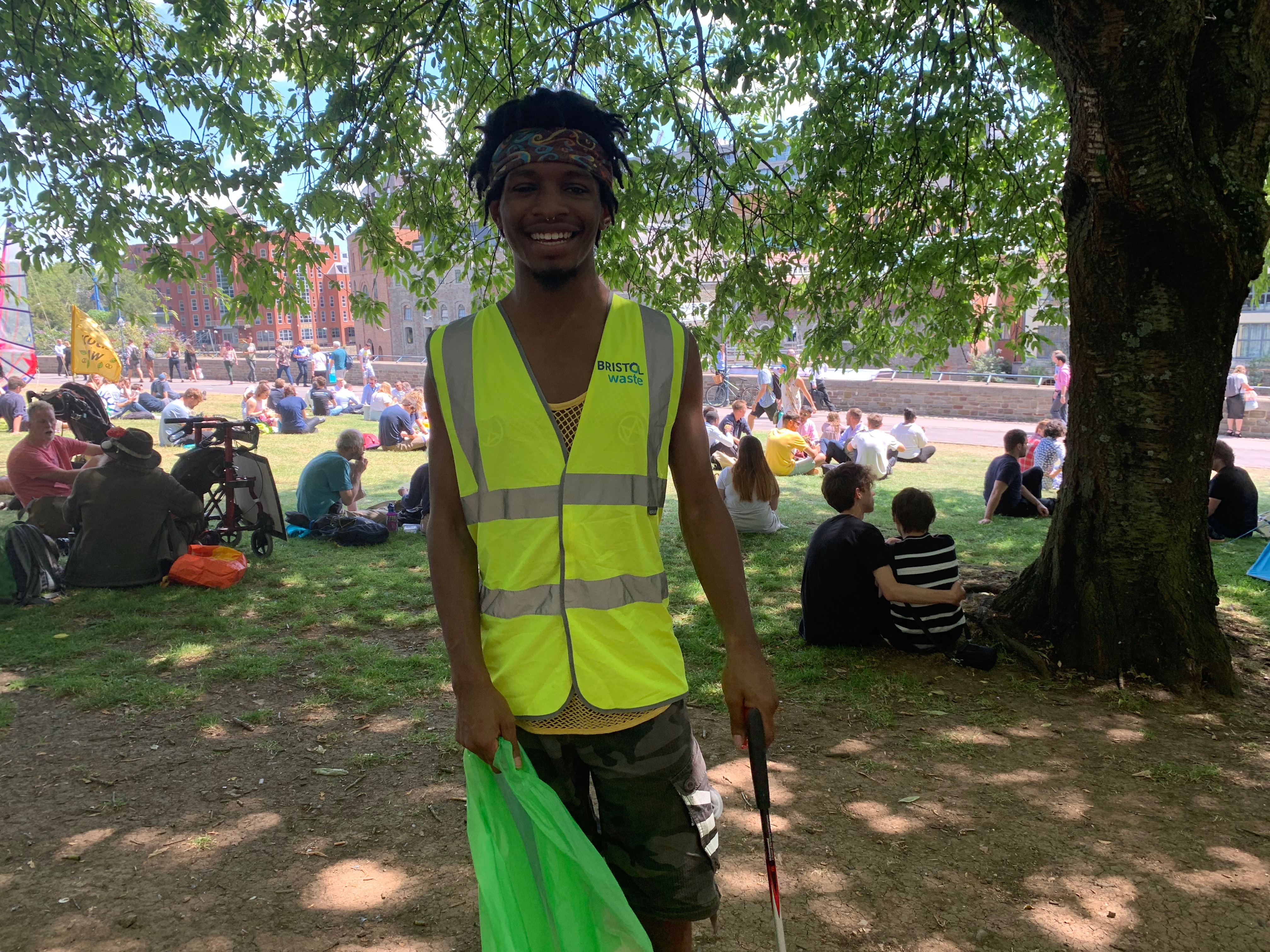 “There’s going to be a lot of suffering if we don’t sort ourselves out. I’m scared. I’m scared for my family: they might not live a full life due to our actions. I think now is the time for massive action.” 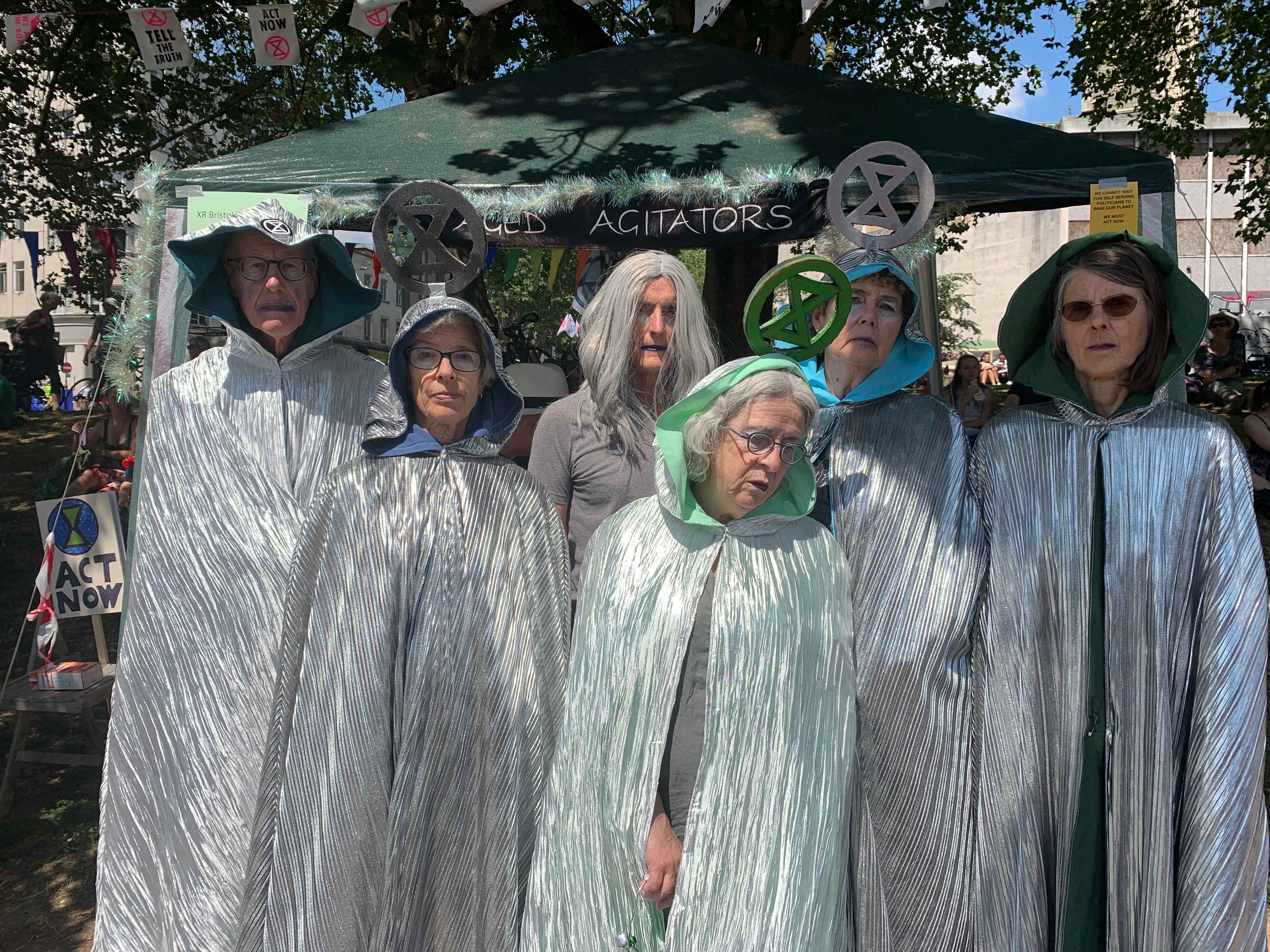 “We’re a group of elders who have decided to create an art action to draw attention to the fact that there are older people in the movement. We want a voice and we do have a voice. We want to make our voice heard. We want people to pay attention to what the oceans and land is telling us. Scientists are the voice of the oceans and earth, and they are telling us that we have to stop. We have to stop pumping carbon into the atmosphere.”

Henry Shaw
Henry, 20, is from the Cotswolds. He’s just got back from travelling and is now looking for a job. 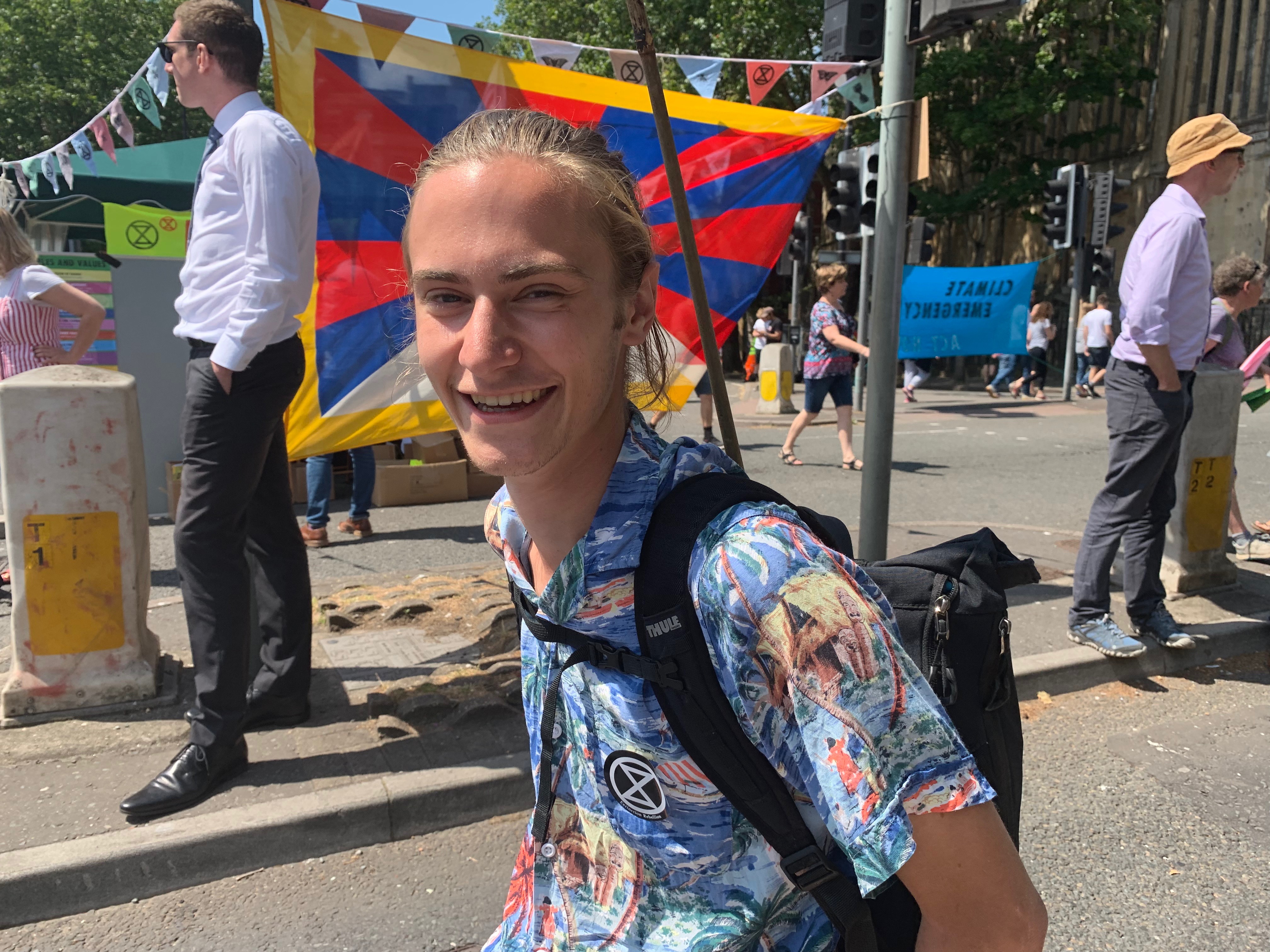 “I was away during the last series of protests and I feel the need to get involved and show my support in any way I can. Numbers is what we need. The more people coming to help over the next five days, the better it will be.” 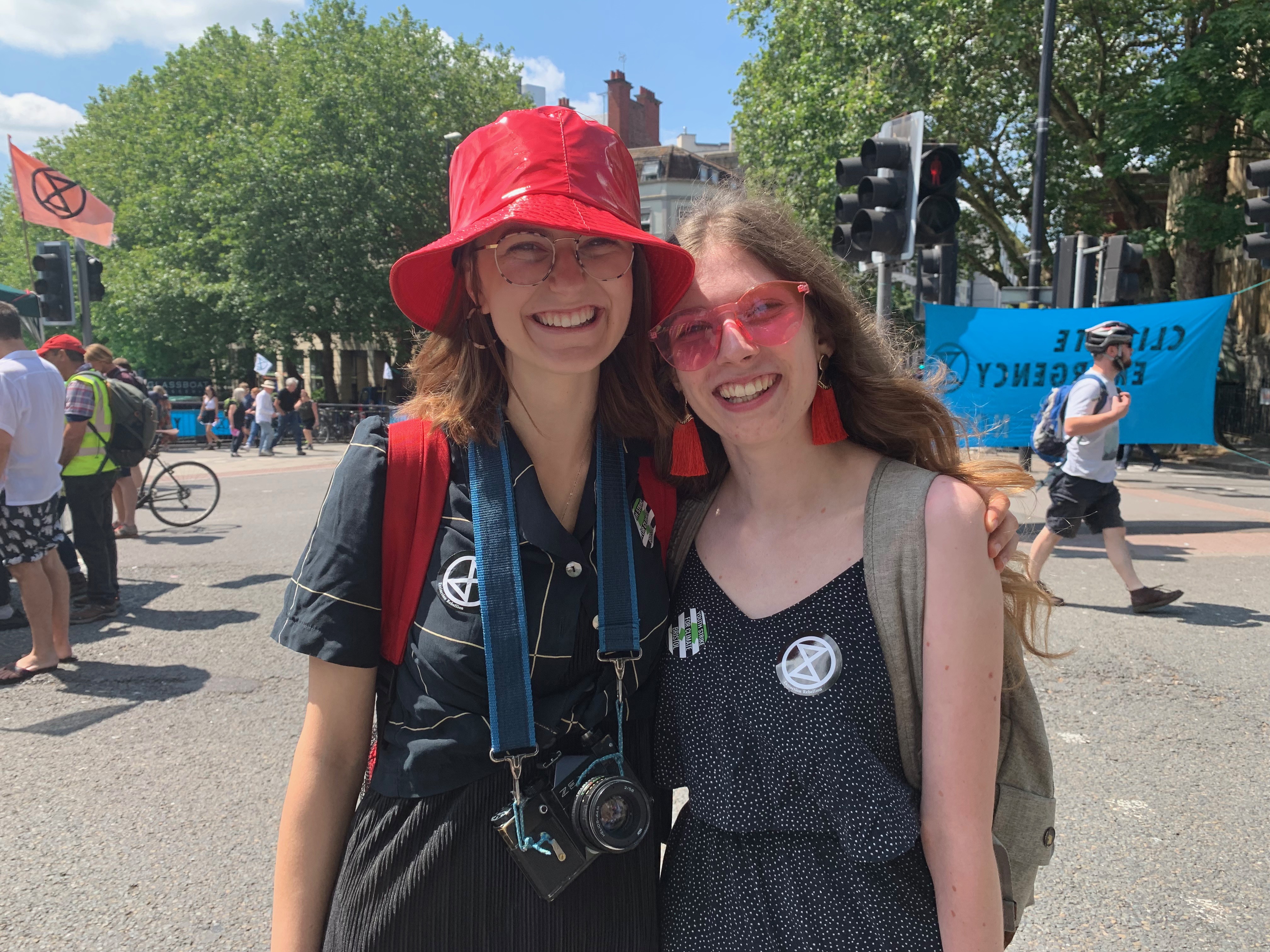 Milly: “We’re in the Bristol youth strike group and in ER youth. We really support it.”

Heulwen: “It’s so scary! Seeing the effects of climate change in other parts of the world, and knowing that our everyday lives are impacting on that further. People aren’t doing anything. And they know we don’t have time.” 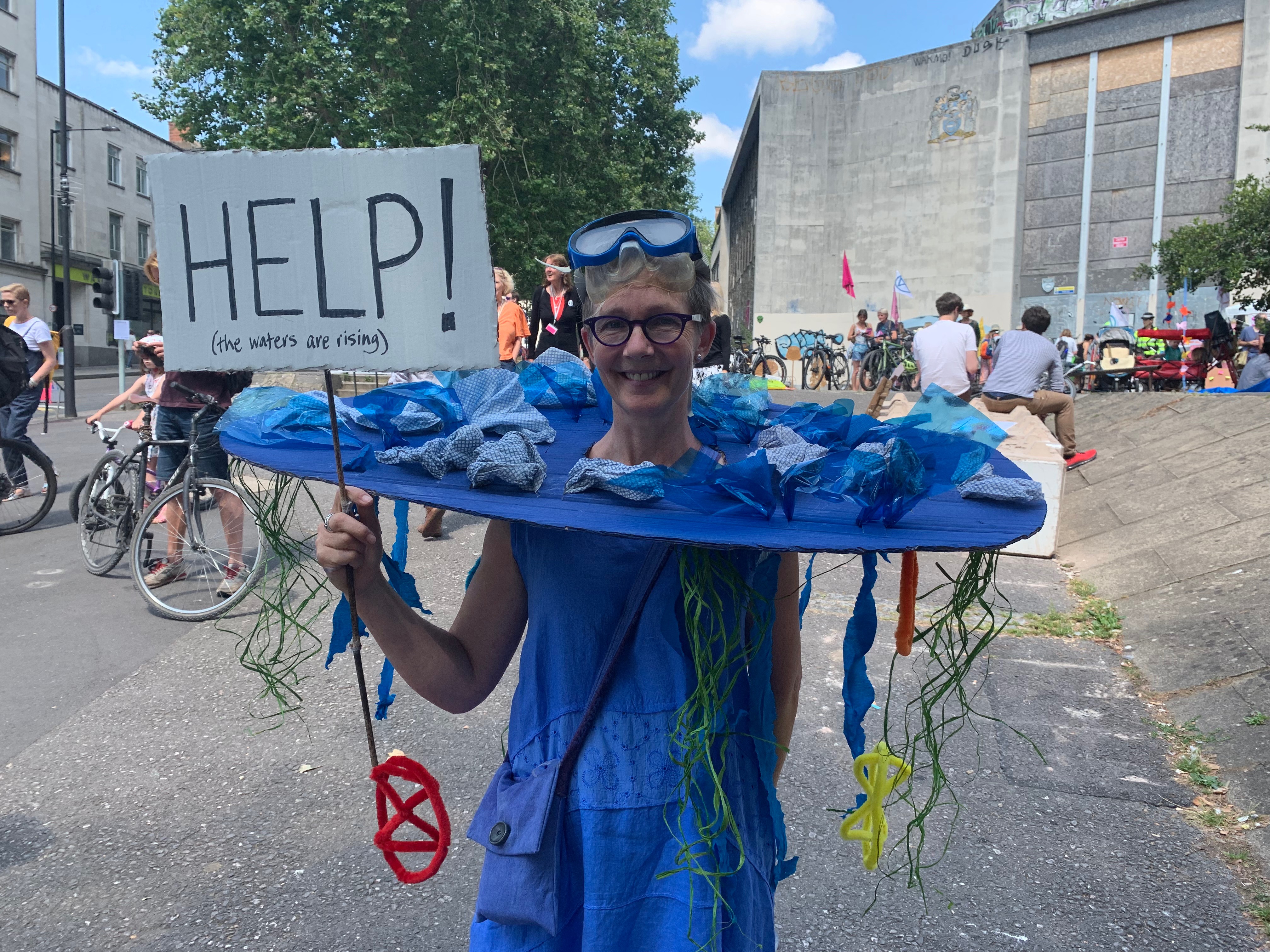 “I’m here because governments have to act faster to address the climate emergency. The theme of this uprising is the ocean. Sea levels will rise by two metres on the current trajectory, and if that happens, we’d have water at our feet where we’re standing now. Governments have to lead the way in making changes. Some may be tough, but in the end, they’ll be good for everybody.”

Helen Jackson Brown, 50 and Marcus Appelt, 46
Helen, 50, is a social worker and Marcus, 46, a freelance photographer. The pair are friends and their children are in the same class at school.

Helen: “We’re here for the youth. The way we’re currently living our lives is not sustainable. We’ve created a climate catastrophe and we need to take action to resolve it. There’s no use sitting at home worrying or complaining. I think we have to use our democratic right to get on the streets and protest; to inform other people and those in positions of power about what needs to happen.”

Marcus: “Time is really running out.”

Murray Chackleford
Murray, 53 lives in Frome. He works as a social worker but today he has the day off. 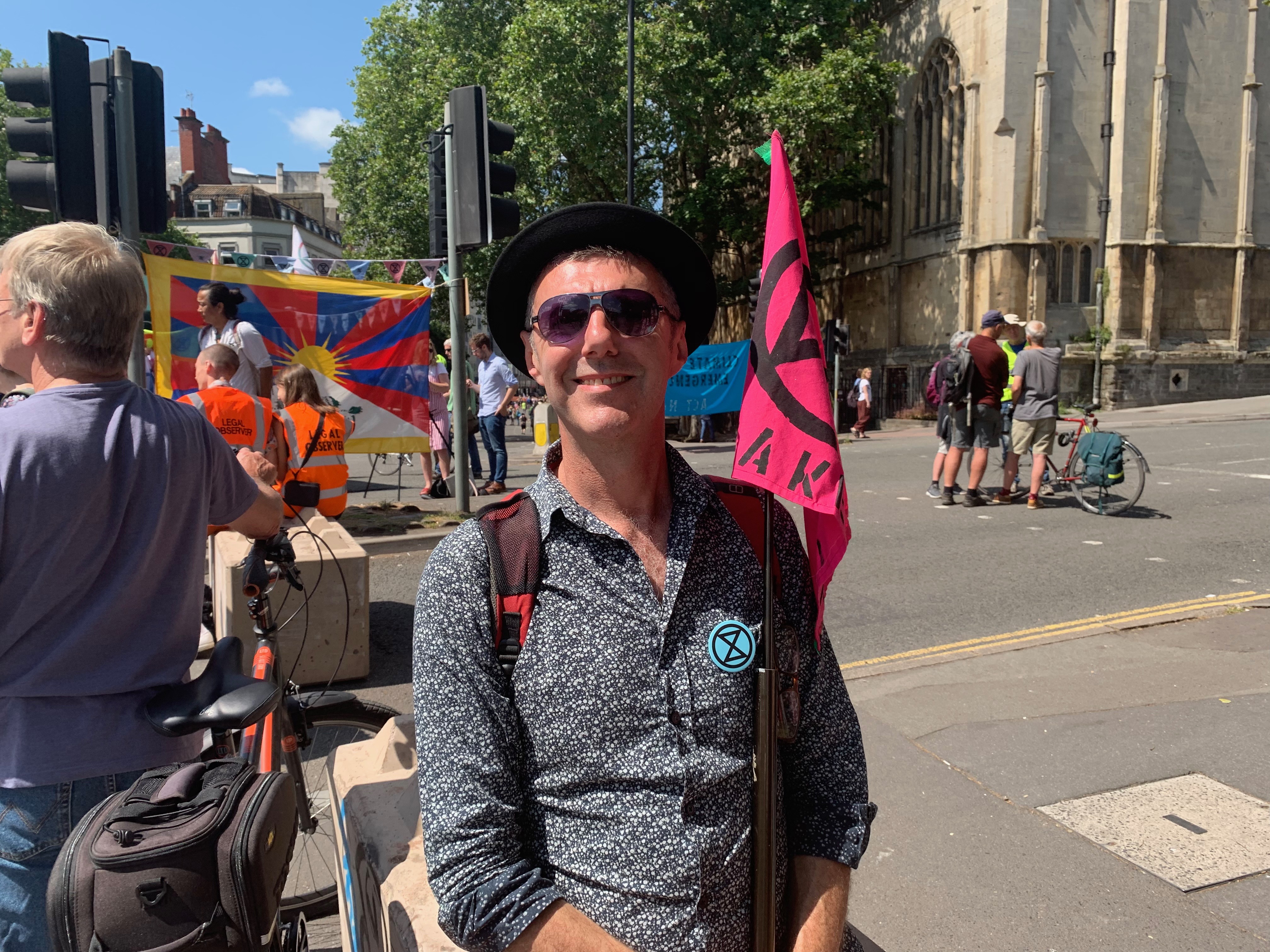 “We’re living in a climate emergency. We want the government to tell the truth about the current situation. Bees are dying, months are dying – water is being poisoned and overused. And we are continuing to extract resources from the world that we can’t afford. ER is in solidarity with all communities that are currently under threat. There are counties in the world that are currently disappearing.” 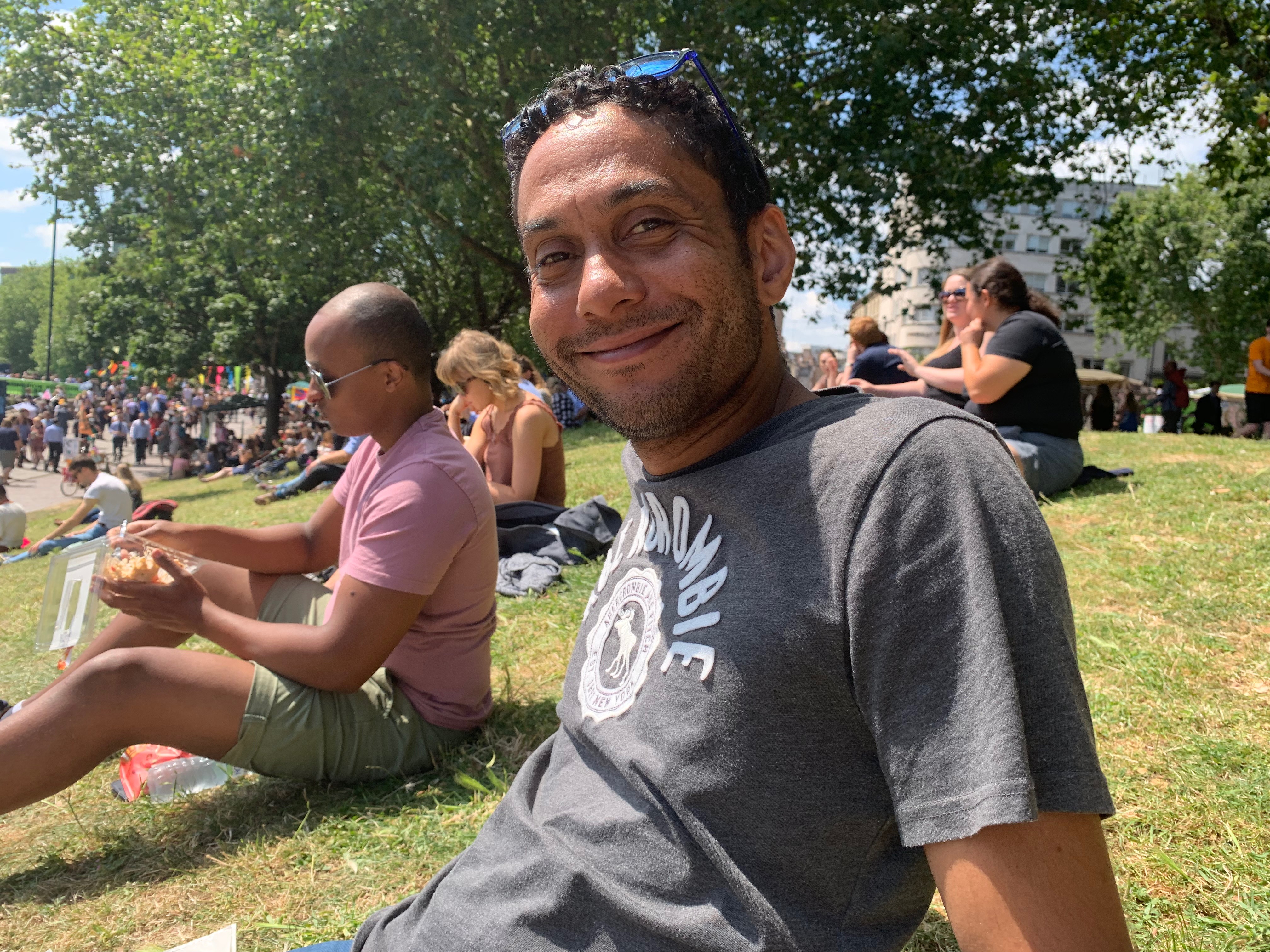 “I think it’s great. I’ve heard people are moaning about traffic and disruption, but I think that for people to change, people like these guys have to disrupt them I think education is required and they’re going about it in the right way.”

Emily Bearman, 22
The 22-year-old NHS administrator has travelled from Swindon to take part in today’s uprising with a homemade embroidered banner 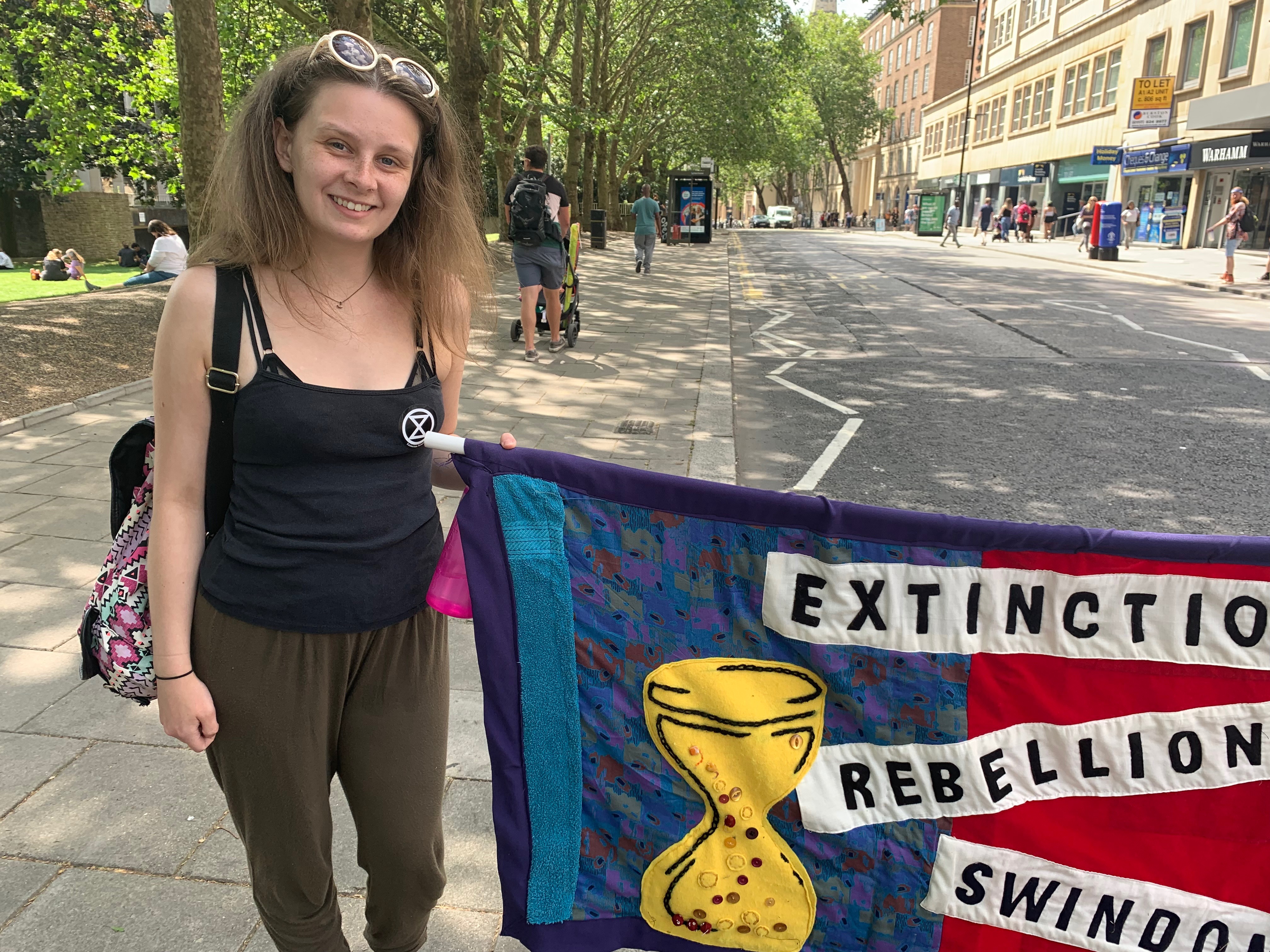 “It’s our closest one. There’s five different meetups across the country and there’s a group of us who are camping here – which is nice! We want to spread some awareness. I think social media can really help us find more people that are interested. I learned of ER through Facebook when they did the protests at London Bridge, so for me, it’s quite helpful.”

Iona Scobie, 18 and Tom Hill, 19
Iona, 18, and Tom, 19, are from Plymouth. Tom has just completed his first year at Oxford University studying earth sciences while Iona is preparing to begin study at Sussex University in September. 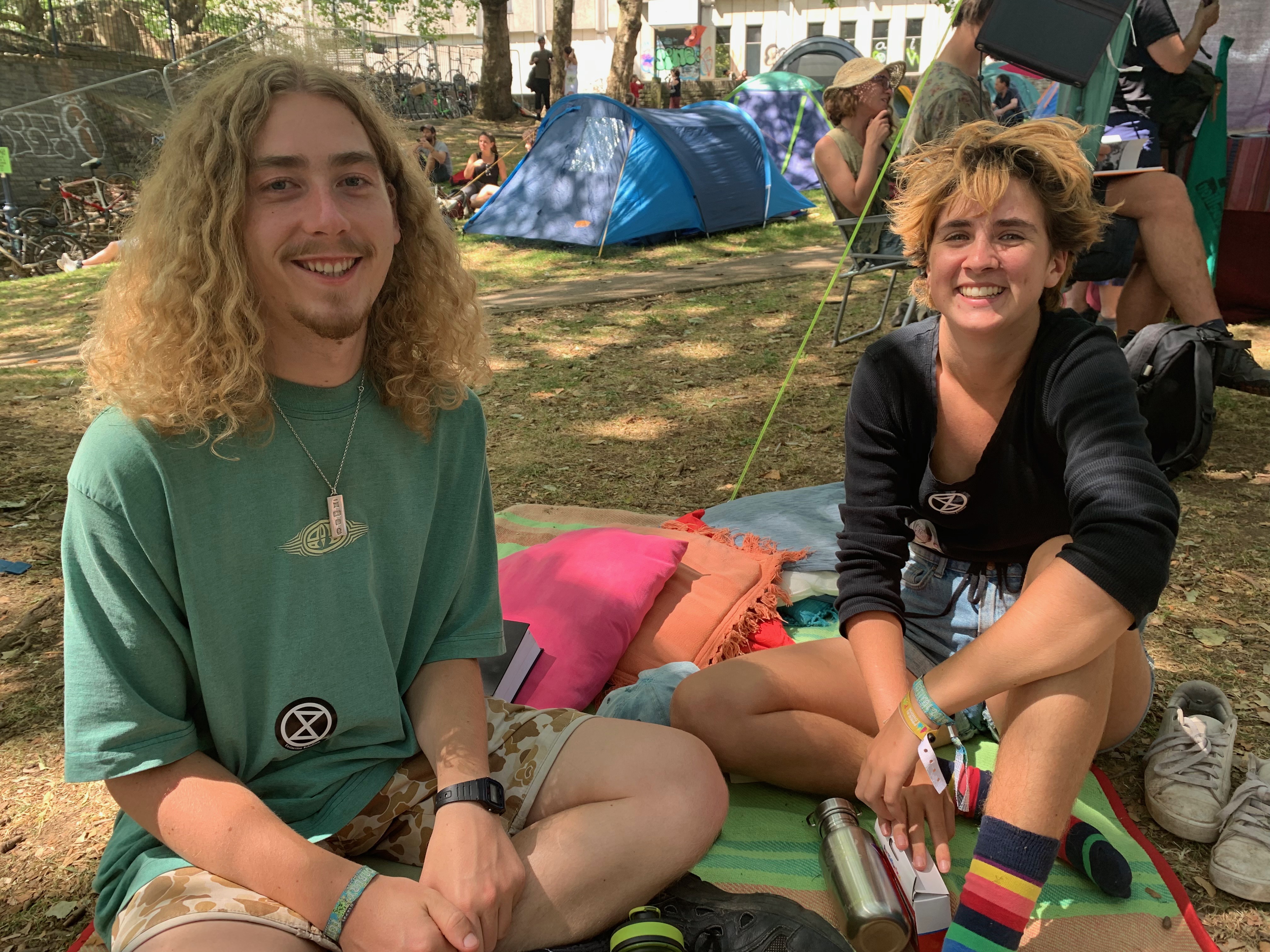 Iona: “We wanted to get involved and find out more. I think it’s good: I like how inclusive it’s feels. There’s lots of families around. We know this is our future. All the evidence is saying that it’s going to be a massive issue.”

Tanguy Tomes, 23
Tanguy, 23, works as a policy researcher in an environmental consultancy. He has taken annual leave to take part in today’s protest. 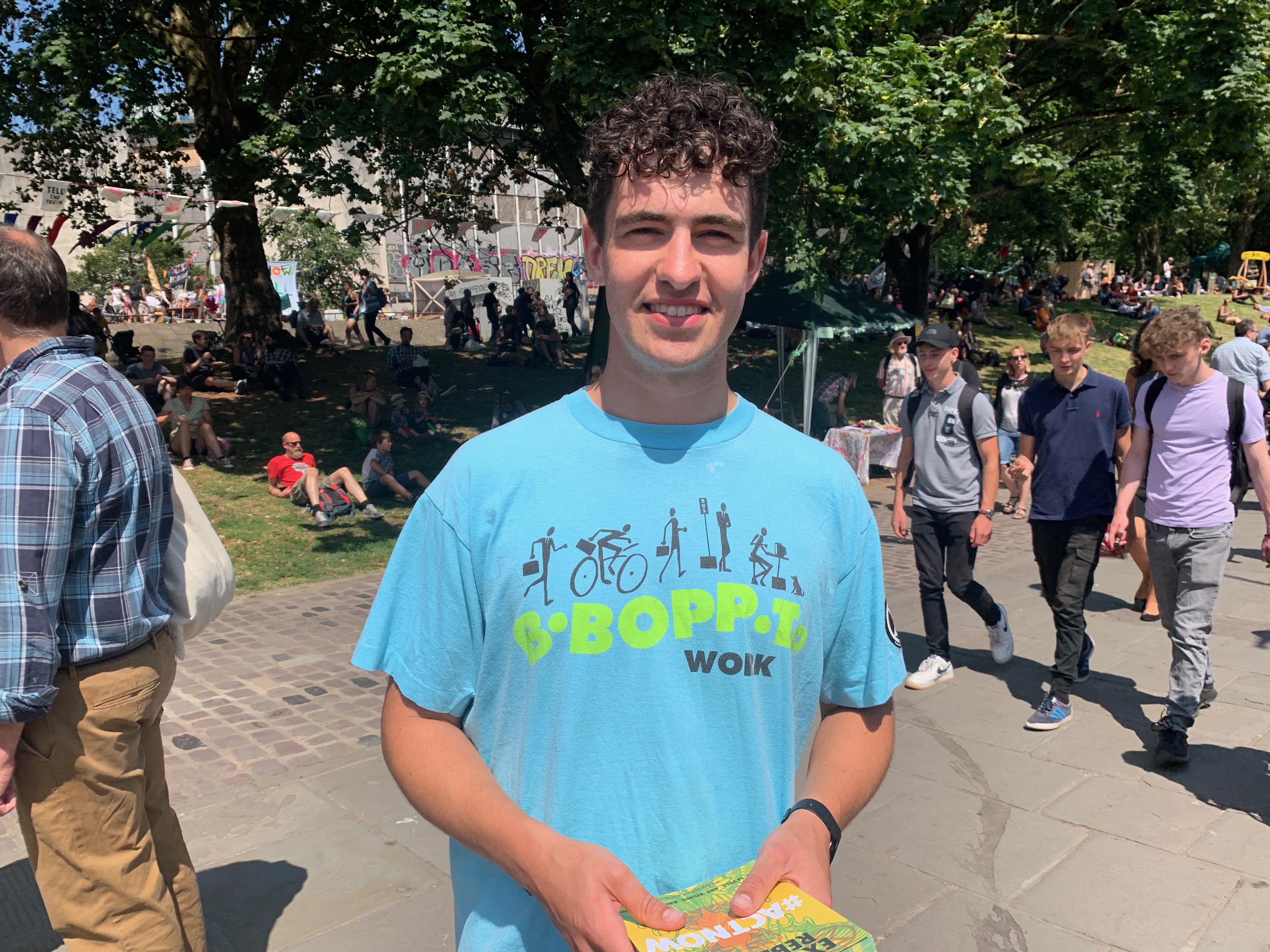 “I’m here because I feel like I don’t have a choice. We’re in a pretty dire situation and I feel like this is the only way we can make a difference.”