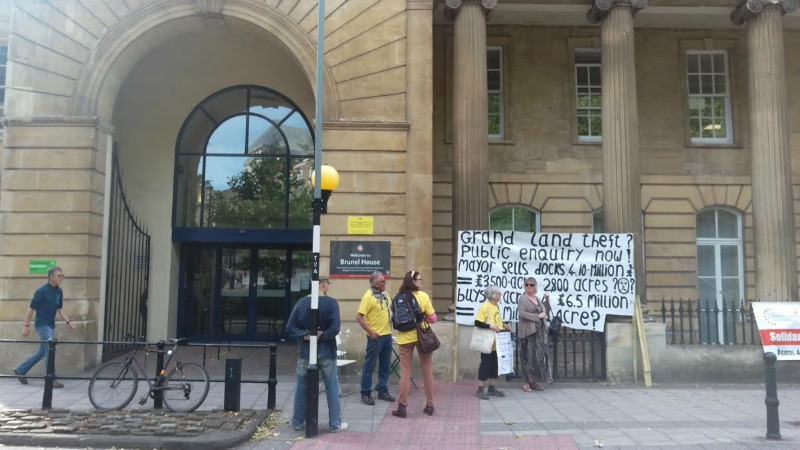 Bristol Port will finally be sold for £10 million, after mayor George Ferguson defied councillors to approve the deal.

His original decision to sell to the Bristol Port Company, who already hold a 150 lease, was referred back to him after councillors voted to “call-in” the move.

But at a cabinet meeting on Tuesday night the mayor went through with the sale, insisting it was a “super price” which did not threaten the future of the Henbury Loop rail line.

Lib Dem Councillor Anthony Negus, who triggered the call-in, said the price tag was based on a flawed, secret report which was bias towards the port company.

He said: “This city council , or rather the mayor, has disengaged with this council consensus after many years of pressure and caved in to the Port Company, giving them what the want at a knock-down, unprotected price.”

Ferguson replied that £10 million for the residual freehold for 127 years of remaining lease, when the Council was currently receiving a peppercorn rent, was a good deal.

“£10 million is a super price, that is without doubt. Anyone who disagrees is foolish,” he told the meeting.

Friends of Suburban Bristol Railways asked for assurances that plans to re-open the Henbury Loop line would not be affected.

South West Transport Network added that the “sale must not prevent the reopening of this route to passenger traffic and the line to Portishead.”

The mayor said the council had been assured in a letter from the port that it had “no desire to stop this [Henbury Loop] development”.

The city council sold the 150-year leasehold in 1991 with the condition that Bristol Port Company could buy the land outright in the future at market value.

At the time of the sale the port was running at a loss, claimed to be close to £12 million a year.

The Port Company wants to own the freehold as the value of its business and power to invest in a new deep water facility is currently undermined by its short-term ownership.

The port is only one of two in the country still under public ownership.

Ferguson said he would put aside £1 million from the sale for Avonmouth, while investing the other £9 million in a “revolving regeneration fund” for city-wide projects.

Two members of Ferguson’s cabinet supported his decision, two were undecided( although held reservations) and one – Labour’s Mark Bradshaw – opposed the move.

Ferguson said he took Bradshaw’s comments with a “pinch of salt” given his recent decision to run against him in the mayoral elections.