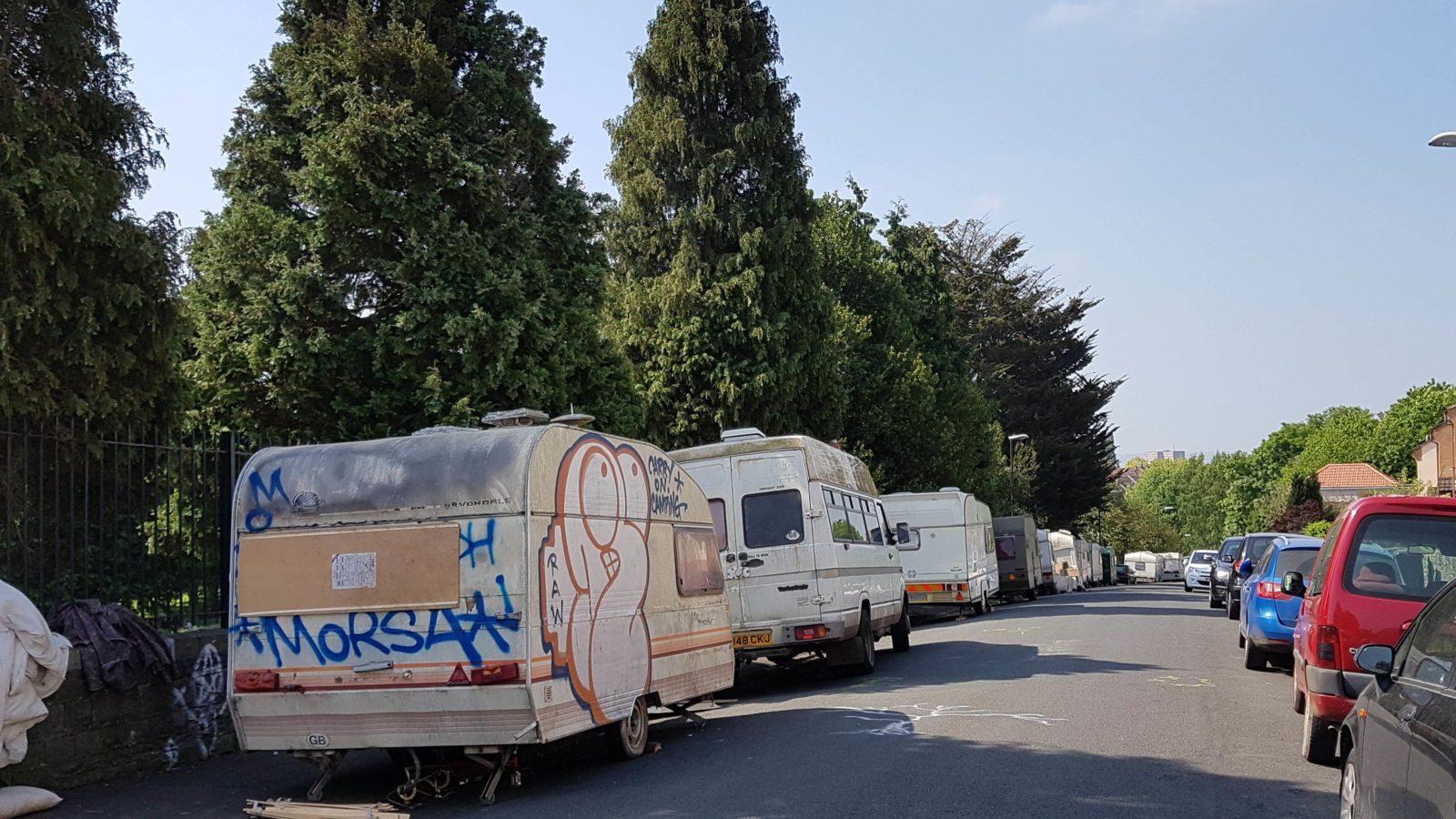 An air of peace rests over Greenbank View, where a couple of friends sip coffee under the trees in the morning sun.

But despite the calm appearance, this is a community left badly shaken by recent events.

The charred remains of two caravans at the end of the road overlooking Greenbank Cemetery are reminders of a devastating fire that tore through the mobile homes in the early hours of Sunday morning.

People sleeping inside narrowly escaped uninjured, but lost everything in the blaze.

In the wake of the fire, the community of van dwellers, a number of whom have been settled peacefully along the dead-end road for some time, were shocked to hear media reports that they now face eviction.

The council says this is due to a rise in anti-social behaviour in the area and is suggesting a temporary alternative site in Avonmouth.

“There is still a community here, but the peace has gone,” says Katie, looking around her sadly.

She is one of what has become a tight-knit group of people from all walks of life that has settled in dozens of caravans here, with some tents also pitched inside the cemetery. The first she heard of the eviction was when they heard the media reports.

“I just think it’s really unfair of the council to not come and tell us,” Katie adds.

“This place is perfect because it’s so quiet, it is really community-spirited and it would be really sad to see it go because everyone looks out for each other. If someone doesn’t have any gas, there is always someone else who will provide it, or give them water.”

For months, the van dwellers have generally existed peacefully alongside residents in the Easton neighbourhood, but Katie admits that recently a minority of people have been causing trouble in the area.

“All anyone wants is to feel safe,” she says. “This last week, I have not felt safe and I have contacted the council, but not heard back.

“I already feel a bit of a target because of all the media attention. I have had people connecting me from all over the country saying ‘you are being evicted’.” 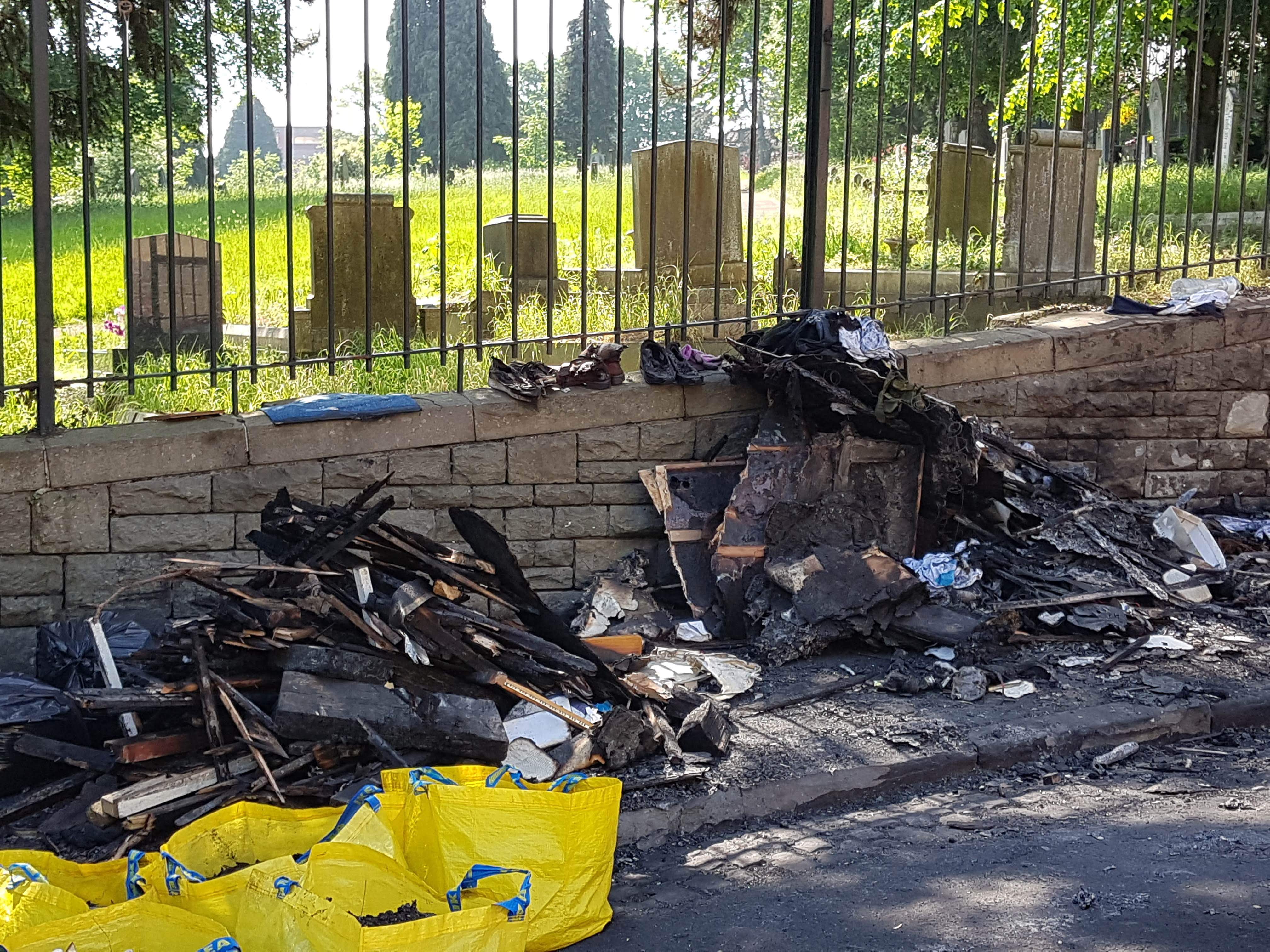 John, a neighbouring van dweller, comes over to chat, cup of coffee in hand. He admits he did not sleep for 48 hours after the fire at the weekend.

“I was one of the first on the scene,” he says. “I went down there with my fire extinguisher. I thought my friend was in there. I didn’t know he wasn’t inside. So that was what I was thinking, that my friend had died.”

For some people, living in vans is a lifestyle choice to go back to basics amidst ever-rising rents in Bristol. For many others, it is simply that they have no alternative. It is legal to live in a vehicle as long as it is taxed and has a valid MOT.

John says that the community tries to challenge any bad behaviour and most of the people residing along Greenbank Avenue go to work every day and just want to lead a peaceful life.

“We are not all bums, we are just homeless and we have chosen to make the most of the situation,” he says.

Joining the group, another neighbour asks what can be done to help those who lost everything in the fire. He proposes that everyone pitches in to get some essentials.

And in fact, amid the headlines and fear, the wider community has been quietly rallying to help.

“It was such a frightening night on Saturday and a humbling day on Sunday,” says Robert, another van dweller.

“And a really humbling day on Sunday. People from all around came here to help, offering showers and bedding and things.”

With the peace shattered, many of the long-standing residents are looking to move but are in need of a plot, ideally with running water so that they can settle, be self-sufficient and have more say over who comes and goes to avoid problems with anti-social behaviour.

“I think the council probably have this stereotype image of us,” adds Katie. “And we would be much better tenants than they imagine.” 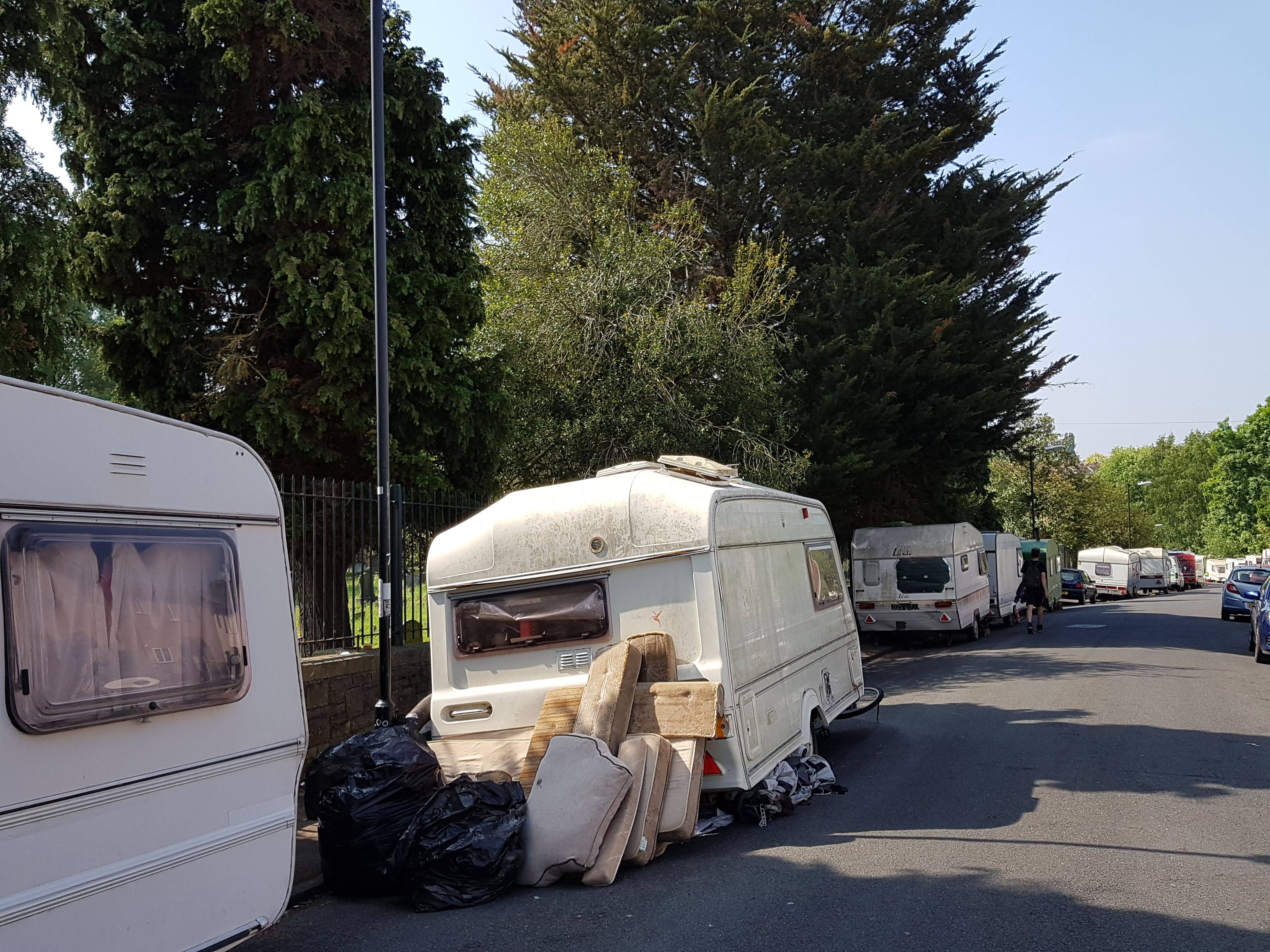 Bristol City Council has confirmed it is planning to issue the group with legal notices next week, requiring them to leave the site. If anyone fails to comply, it will seek a court order to remove the vehicles.

A council spokesperson said: “Over the last few weeks, the encampment has increased to 50 vehicles parked around Greenbank Cemetery, plus a small number of tents pitched within the cemetery, and we have seen a significant increase in anti-social behaviour and complaints being made to the police and the council from local residents and some of the vehicle dwellers themselves.

“The issues reported have included loud music, drug use, public defecation, littering and poor waste management. The site is also becoming a gathering point for people at night, resulting in disturbance to local residents.

“Welfare assessments of the vehicle dwellers have been carried out, and any vehicle dweller requiring assistance will be offered this either by the council, or by one of our partner agencies.”

Van dwellers in need of housing advice will be referred to the relevant service, and others will be offered the opportunity to move to the council-owned site in Avonmouth as an interim measure.

Following the upcoming eviction, the council will be seeking an injunction to prevent the road being immediately reoccupied.