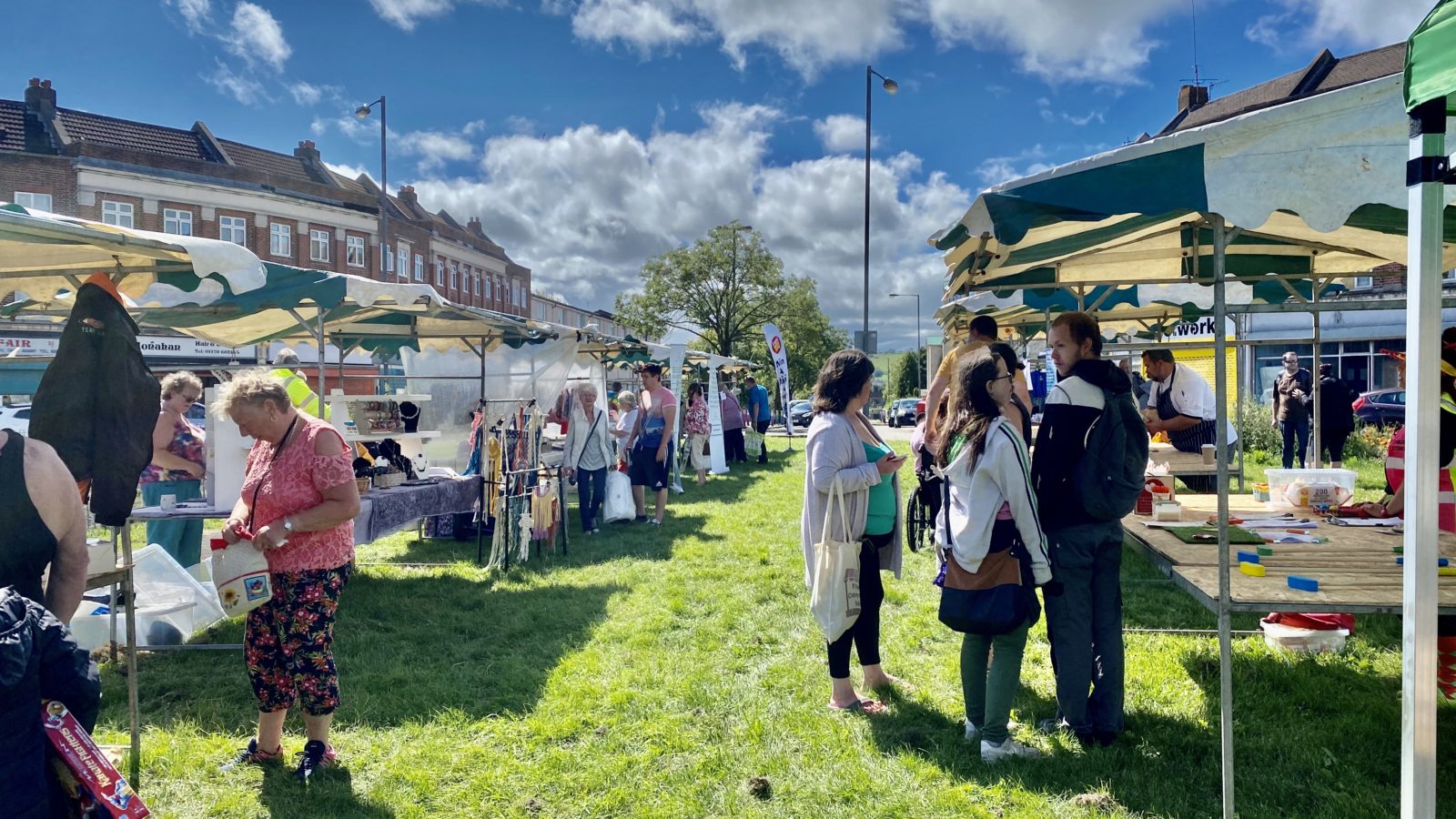 It’s a Saturday, the sun’s shining, and there’s a noticeable buzz in Knowle West as the local community market is back on Filwood Broadway.

The Filwood Community Market is usually held once a month, but hasn’t been able to happen since the country went into lockdown at the end of March.

Dave Wherrett is the chairman of the market, and is always ready to sing its praises.

“It’s for the benefit of the whole community and is drawing people’s attention to Knowle West,” he says. 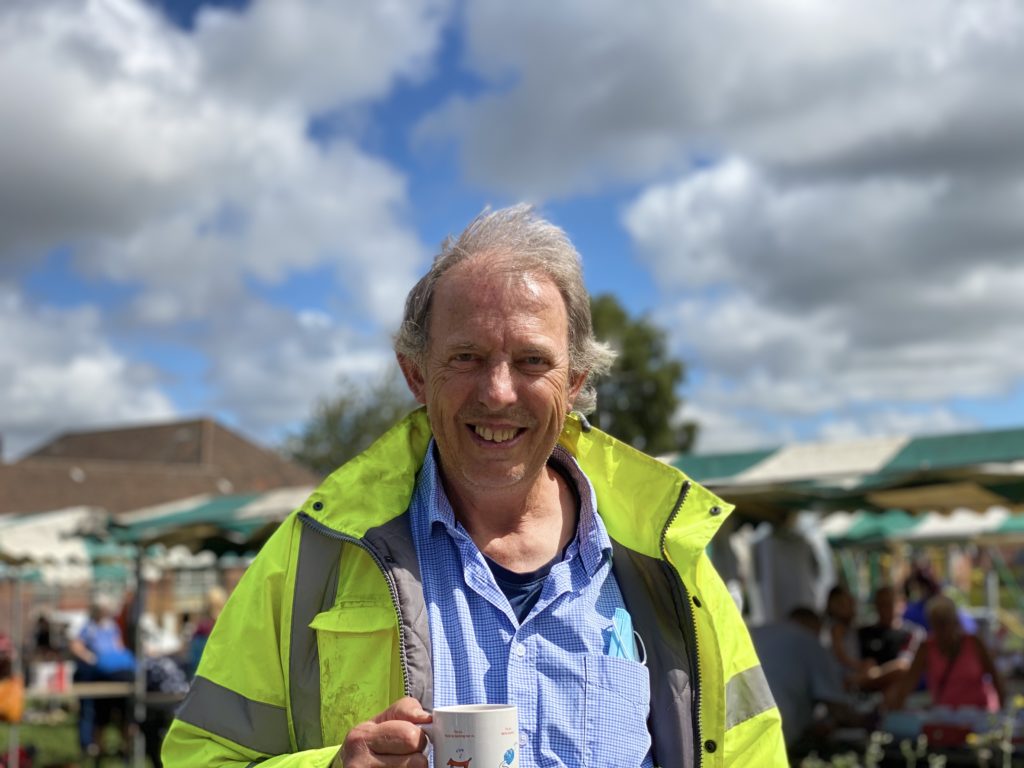 The market is organised by a committee of local people and supported by a team of volunteers. Photo by Charlie Watts

In a hi-vis jacket, Dave’s hard to miss as he patrols the market to make sure everything is as it should be.

“Most of the traders are from the area as well, so it’s local money going to local people,” he adds.

This month’s market is on the green outside the front of Filwood Community Centre, and canopies flapping in the wind pull you towards it.

There are about ten stallholders here today, a couple of whom have come from as far away as Wales. One is selling jewellery, which is sparkling in the sun, while another is selling sweet-smelling soaps.

There are also some tasty baked goods for sale from local organisation re:fill, and there’s freshly-squeezed apple juice for sale from Redcatch Community Garden – refreshing on a day like this. 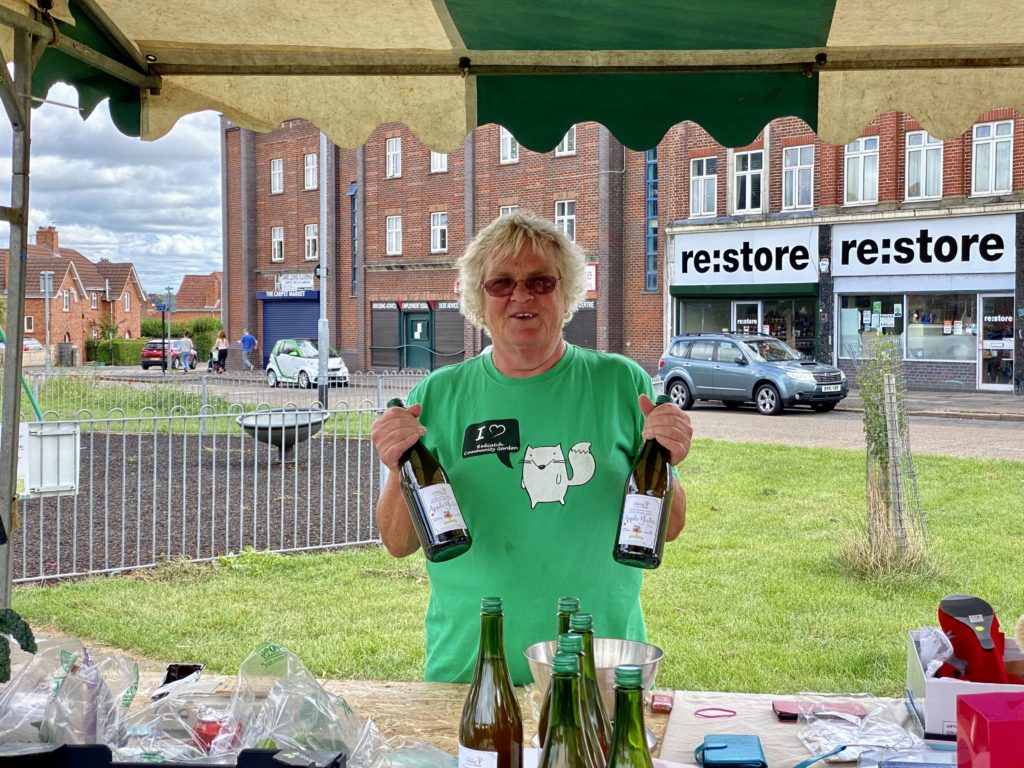 Fresh produce and apple juice are up for grabs at the market. Photo by Charlie Watts

The market was started in September 2019 at Knowle West Fest – an annual celebration of the best of the local community. It took place every month after that until April 2020, when it was put on hold due to the UK-wide lockdown.

“Unfortunately, Covid-19 did mean that we couldn’t continue,” says Dave. “During that time, the weather was excellent, but we were all locked away.

“Today is the first day we’ve been able to get out and do the market, and it’s running exactly as I would want it to be.

“This is also probably the best weather we’ve had for it. And, as you can see, once you get the sun, you get the people.” 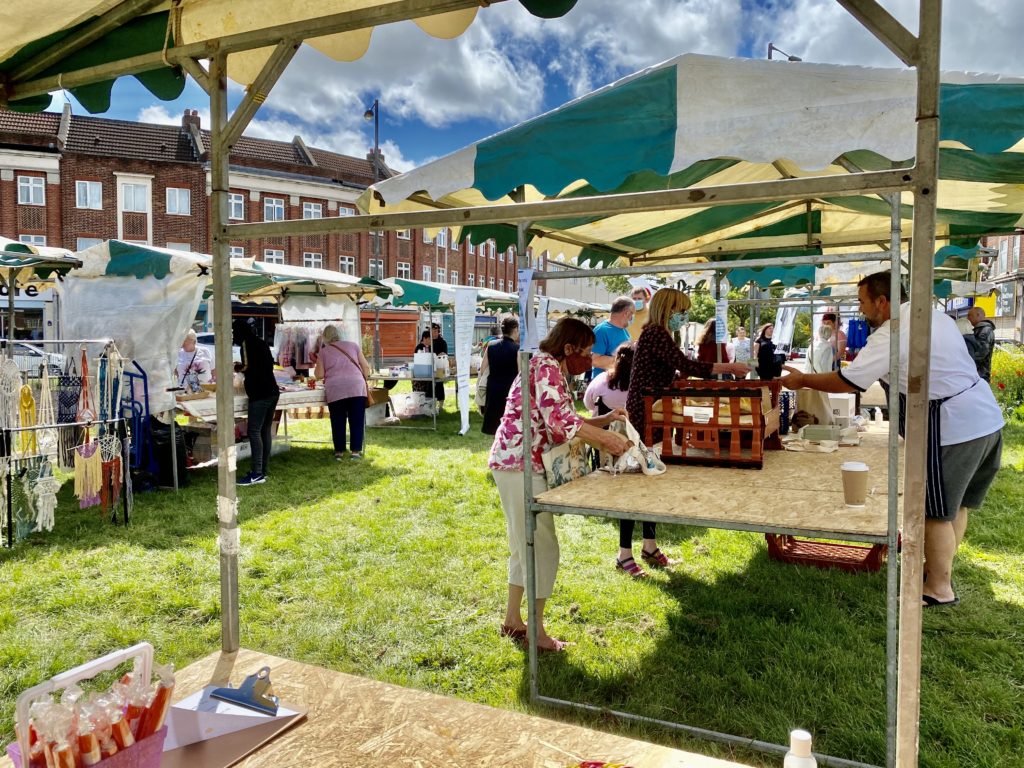 The August market is the first since the Covid-19 outbreak sent the UK into lockdown. Photo by Charlie Watts

Knowle West resident Mary Stokes is one of the stallholders at the market, selling children’s clothes she’s sewn for her business Sew’n’Sew by Mary.

She has so much on offer that she’s had to make use of a metal bar, holding up her stall, to hang some of the dresses she’s selling.

“Filwood Broadway is very sad and it needs a lot doing to it, but the market is bringing the community back together again,” she says. “It’s fun and keeps me busy.”

Next to Mary is Sally, who’s selling bath bombs for her business Little Luxuries, adding a sweet scent to the air. 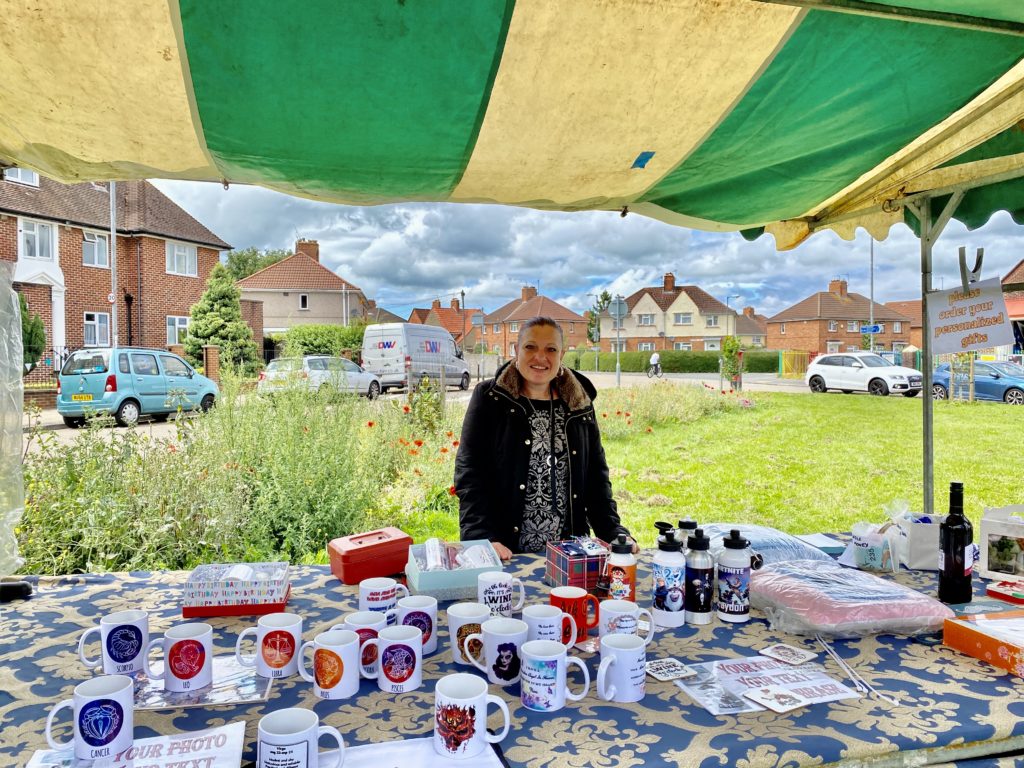 Personalised mugs, water bottles and cushions are being sold at the market. Photo by Charlie Watts

Opposite, Kerry Rees is helping out on her partner Kevin Williams’ stall for his business pressit 4u, which sells custom-printed products.

The table in front of her is scattered with mugs with different star signs printed on them, and you can’t help finding your own.

She’s also doing the raffle, which is proving popular with local people, with one person buying £20 worth of tickets.

“The market gets me out of the house and is something to look forward to once a month,” she says. “It’s also bringing back that old-fashioned type of community you don’t always see anymore.” 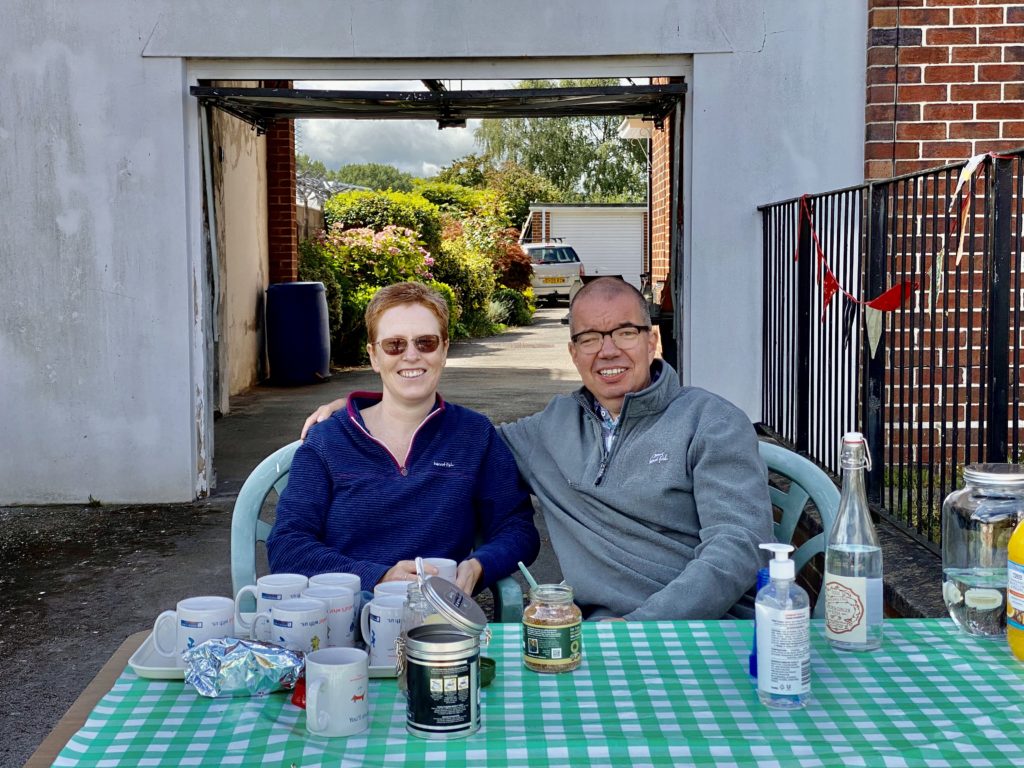 Teas and coffees are going down well at the market. Photo by Charlie Watts

Phil and Ruth Nott, who are members of the Lee Abbey religious community in Knowle West, are also doing their bit for the market. They’re giving out free drinks, which is keeping them busy.

“There was nobody selling tea or coffee so we thought it’s one of the things we could do, to join in with all the good stuff that’s happening in our community,” says Phil.

The biscuits they’re giving out are also going down a treat, with one particular child coming back for more. 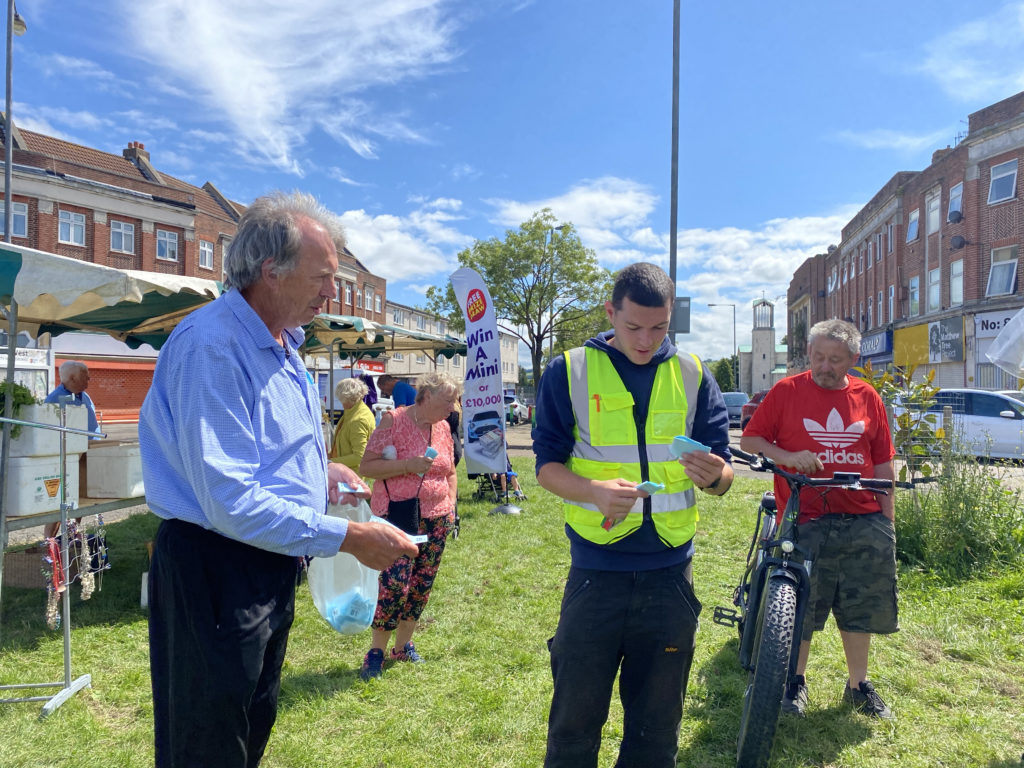 The market raffle takes place at the end of the day. Photo by Charlie Watts

Local volunteers, such as Chris Lewis, are also part of the market. They’re there before anyone else to put the stalls up and stay there after everyone else has gone to pack everything away.

At the end of the day, Chris celebrates his hard work by eating some sweets he’s won in the raffle.

“The market is about meeting new people and trying to get people back to Filwood Broadway to make it a bit better and livelier,” he says. “Hopefully we get even more people here next month and the weather’s as nice as this.”

The next Filwood Community Market takes place on Filwood Broadway in Knowle West from 11am-3pm on Saturday, September 5. To get involved, email filwoodcommunitymarkets@gmail.com

Charlie Watts is reporting on Knowle West as part of Bristol24/7’s community reporter scheme, a pilot project which aims to tell stories from areas of Bristol traditionally under-served by the mainstream media

Read more: Knowle West to get its own walk of fame