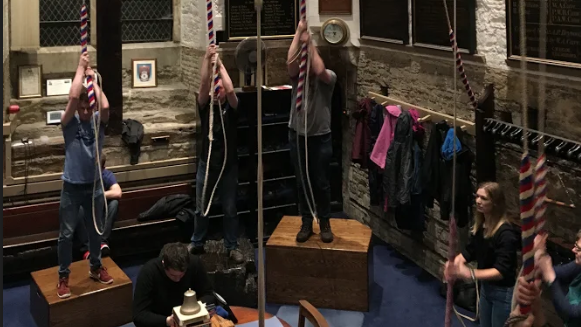 The ringing chamber in Bristol’s St Mary Redcliffe Church is just barely big enough to fit its team of 12 ringers.

They have no music; every strike of the bell must be kept in memory. In the ringing chamber, silence is key; the ringers must not be distracted. Surrounded by plaques of notable historical ringings, it is a lot of pressure. They play for over ten minutes at a time and absolute focus must be maintained throughout.

Such a highly-developed skill deserves an outlet to showcase it. In the UK this takes the form of a national bell ringing competition, in which teams from all over the country compete. The Bristol team are here tonight to practice their piece for the eliminator round on March 23, hosted at St Mary Redcliffe Church.

At  St Mary Redcliffe Church, the bells are hung for a traditional kind of ringing called ‘change ringing’, originating in the UK, normally rung for commemoration or to signal the start of a service. The bells are hung upside down to allow for more control over the order and speed the bells strike, with one ringer for each of the 12 bells.

Reliance on fellow ringers is paramount. All it takes is for one person to lose concentration to ruin the piece. Bell ringing melodies are comprised of ‘changes’, which are mathematical permutations that dictate the different sequences the bells are rung. Before they can start playing a piece, the bells must be rung in a ‘round’, which refers to the ringing of all 12 bells in order from highest to lowest.

It’s no surprise that it can take months to years to perfect the skill. Many of the ringers present have been ringing since they were very young, often inspired by friends and family members. Associate member of the Bell Ringing Guild Christine Sworder jokes that there are “ringing dynasties” of families who have passed the skill from generation to generation. Some of the bell ringers here today have the same names as those adorning the walls.

Annabelle Frost, who has been ringing for 17 years, says that the community is “a small world. You can go anywhere and have mutual friends”.

During the competition, each team plays a 12-minute piece. Within that, each of the 12 bells will strike 252 times, meaning the ringing team have 3024 bell strikes to get as accurately as they can. Judges listen to a broadcast of the ringings, using their own expertise and a software called ‘Strikeometer’ that analyses the accuracy of the ringing against mathematical models.

In the upcoming eliminator round, the Bristol team will be competing against other teams from up and down the country for a place in the June final at Exeter Cathedral. Their competitors include the Birmingham team, who have consistently triumphed in previous years.

Despite their desire to win, the Bristol ringers maintain the camaraderie of bell ringing that has become so apparent, with Michael describing the competition as “fierce but friendly”.

Christine adds: “You’ve got to admire the skill of other teams.”

Last year, the Bristol team came seventh but they’re optimistic about the competition this year: “I think Bristol will get through,” ringing master Gareth Lawson says.

Let’s hope that being on home turf will be an advantage for them on March 23.