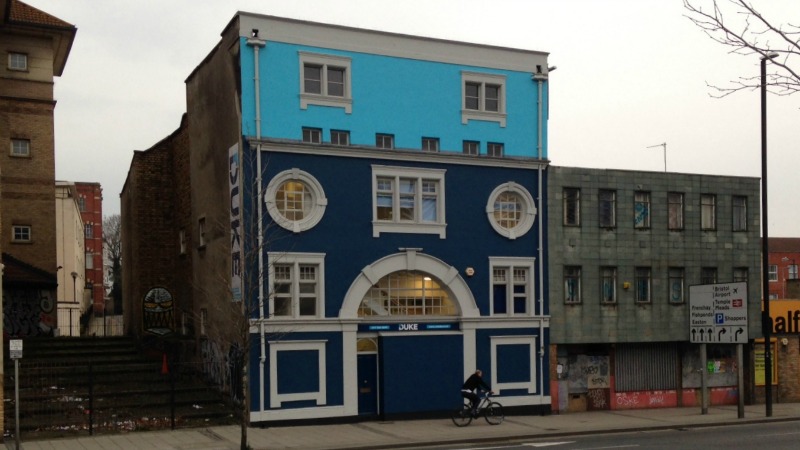 Once upon a time, Bristol had 61 cinemas, from ornate picture palaces to wretched fleapits. All but a handful are gone now. Many of the city centre ones were destroyed in the Blitz. Others were demolished and replaced by new buildings. A few are still standing, more-or-less, and have been converted for different uses. You probably walk past at least one of them every day. Here are some of the more interesting ones. We haven’t included the ABC Whiteladies Road because it could yet become a cinema again.

1. Finzels Reach, Counterslip
Now a swanky office/apartment complex ‘rebranded’ and infested with yuppies, this site was formerly known to generations of Bristolians as the old Courage Brewery. But before that, way back in 1908, Bristol’s very first cinema could be found here. The Bio, or Bio-pictureland, was set up in the long-demolished Counterslip Hall by an entrepreneur named Frank Ogden Smith. He figured that there was easy cash to be made from this moving picture fad and set up a chain of cinemas across the region. Alas, the reportedly rather grotty Bio lasted less than a decade.

2. The O2 Academy
Opened back in 1966 with the Lord Mayor and sundry other civic dignitaries in attendance for a charity screening of Doctor Zhivago, the New Bristol Centre’s brand spanking new ABC was heralded as the luxurious cinema of the future (see hilarious Pathe newsreel, below). It wasn’t. Legend has it that the balcony was haunted. Bear this in mind when you’re rocking away to your favourite band in the Academy.

3. King’s House, Old Market
A nondescript five-storey office building on the corner of Old Market Street and Bond Street marks the spot of the King’s Cinema, opened in 1911. Its main claim to fame is that in 1929 it became the first Bristol cinema to show one of those new-fangled talkies. The film was Al Jolson’s Singing Fool and the public lapped it up. There were 50,000 admissions in the first fortnight. By the ’70s however, The King’s, like most of Old Market, had fallen on hard times and was reduced to showing porn. Its last show before demolition in 1976 was a double-bill of Hot Dreams and Man Hungry.

4. Merchant Venturers Building, University of Bristol
Back in 1911, the pointy bit at the junction of Woodland Road and Park Row became Clifton’s very first cinema, The Coliseum. It had previously been an exhibition hall and a skating rink. The cinema closed in 1924.

5. A couple of benches and some greenery, Castle Park
With its arse end dangling over the Floating Harbour, the Regent Cinema always threatened to tumble into the water. Luckily it never did, though cracks quickly started to appear. Opened in 1928, the Regent quickly won renown as Bristol’s most ornate and luxurious picture palace. It had 2,050 seats and a further standing-room capacity for 212 proles. It took two years to build and just one night for the Nazis to demolish during the Blitz.

6. Another bit of Castle Park
Peter Street, which no longer exists thanks to those pesky Nazis, boasted the distinction of having two completely different cinemas on the same site. The first was Queen’s Hall. Opened in 1910, this was Bristol’s very first purpose-built cinema. It also had the unique feature of a sliding roof that was opened to let out all the fag smoke between shows. No, really. This one closed in 1933 and was replaced by the dead futuristic News Theatre Cinema, which showed newsreels and cartoons. Remarkably, it was one of a handful of buildings in the area to survive the Blitz and soldiered on until 1956.

7. Embassy House, Queens Avenue, Clifton
See that vast horrible concrete monstrosity, fronted by Barclays bank, just down the road from the Victoria Rooms (which was also, briefly, a cinema – The Clifton Super Cinema, no less – in 1920)? Ever wondered why it’s called Embassy House? That’s because the whole building was once the Embassy cinema, one of 12 new cinemas built in Bristol during the 1930s to cash in on the talkies. The Embassy boasted the distinction of being the city’s largest cinema and employed a staff of 50. But it was just too big to survive the onslaught of TV and closed in 1963.

8. Bristol North Baths, Gloucester Road
Now shamefully closed, the Bristol North Baths on Gloucester Road was converted for use as a cinema during the winter of 1922, when it was too cold to swim. A floor was laid over the baths and seating installed, with the three-sided viewing area serving as a balcony. Initially intended as an experiment, this proved so successful that the building was used as a pool during the summer and a cinema during the winter every year until 1936.

9. Oasis Dental Care, Ashley Road
A cinema in St. Paul’s? Oh yes. And not just any cinema, either. The Metropole was Cary Grant’s local, and he often popped along to watch silent comedies. It opened in 1913 as a modest single-storey picture house, was rebuilt in 1938 and finally closed in 1968.

10. CW Duke, Newfoundland Circus
These posh building refurbishment specialists occupy the former site of the downmarket Magnet Cinema. While the nobs flocked to the likes of the art deco Whiteladies Picture House, the lower orders opted for the cheap’n’cheerful 420-seat Magnet, which opened in 1914. And who needs popcorn when you can gnaw loudly on that great local delicacy pigs’ feet, purchased from a shop next to the cinema? Slum clearance did for the Magnet in 1937, when its clientele were moved out to the suburbs.

11. Kustom Floors, Cannon Street, Bedminster
They actually had cinemas in ‘there be dragons’ territory south of the river in the olden days. What’s more, Bedminster even had a Town Hall. In 1909, pioneering cinema entrepreneur Ralph Pringle took a lease out on the old place and turned it into a cinema. It remained open until 1954.

12. Junction of Cheltenham Road and Gloucester Road
Another of Pringle’s local cinemas, this was his crowning glory. In 1910, he demolished three shops and two houses to build a vast cinema with a huge lounge and marble staircase leading to a grand circle. Naturally he called it Pringle’s Picture Palace. It later became the Zetland and the Scala before closing in 1974. After that, it was turned into the annexe to a furniture shop and was eventually demolished. Pringle died in poverty and is buried at Arnos Vale cemetery.

13. Van Dyck Forum pub, Fishponds
Opened during the silent movie gold rush in 1926, the Vandyck cinema seated more than 1,000 people, including 332 on the balcony. It became a bingo hall in 1973 and is now a Wetherspoons pub.

14. Proper Job, Warrington Road, Brislington
Opened in 1938, this 1,400-seater was one of two cinemas competing for the Brislington picture-going shilling. It closed 30 years later, becoming a Kwik-Save supermarket and, currently, a DIY superstore.

15. Marriott, Lower Castle Street
By the early 1980s, cinema exhibition was in the doldrums and many picture palaces, even the big mainstream chains like ABC, resorted to giving over one or more screens to wankers. The grot they showed was pretty tame stuff, as it had to be certificated by the BBFC. Eventually, even this trade was killed off by video, as gentlemen preferred to masturbate at home. The Europa in Lower Castle Street was the last of its breed and was screening smut exclusively by the time it finally closed its doors in 1987. Today it’s been swallowed by the Marriott Hotel, formerly the Holiday Inn.

With grateful acknowledgement to A City and its Cinemas by Charles Anderson (Redcliffe Press, now sadly out of print) and the Cinema Treasures website.