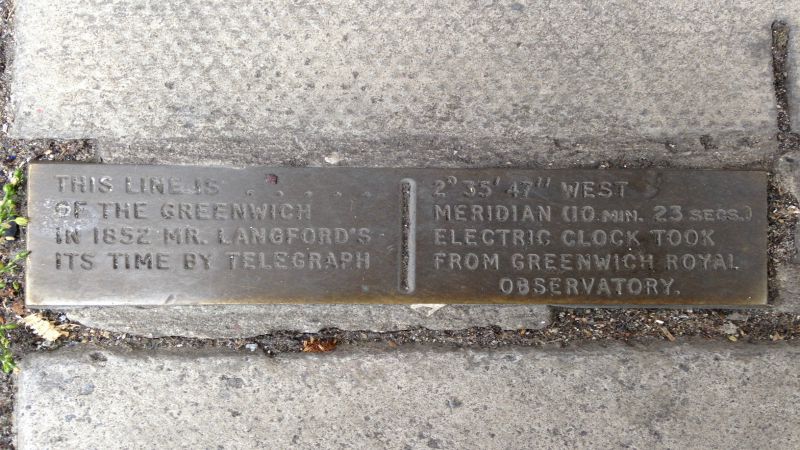 Asda Bedminster stands on the site of St Catherine’s monastic hospital which was built in the 13th century; and the north west end of Brightbow Bridge which once spanned the river Malago. To this day the Malago still flows beneath East Street.

Four men from Bristol – WG Boyce, J Burton, L Huson and TH Stephens – fought and died on the Republican side in the Spanish Civil War (1936-39). This plaque in Castle Park commemorates their sacrifice in the fight to defend democracy.

All of the benches on this side of the fountains in the centre have plaques. The most interesting is a replica of a plaque on East River Drive in New York marking where stones, bricks and rubble from a bombed Bristol came to the USA as ballast in boats. This was then dumped in an area of East River that became known as the ‘Bristol Basin’ – and there was so much of it that the city built on top of it.

Erected in 1937, this plaque at the end of St Stephen’s Street marks the last site of the head of the quay pipe conduit which for many years was one of the principal sources of water supply for inhabitants of the city and for ships in the harbour. Water came from springs at Ashley Down.

Part of the Easton Time Signs Trail, this plaque on the side of the Chelsea Inn looks at the history of Bloy Street, first recorded in 1888 and which was once probably Bristol’s longest and straightest residential street.

Christmas Steps was once known as Lunsford’s Stairs, named after the gallant royalist Colonel Henry Lunsford who was killed during the storming of Bristol on July 26, 1643.

Undoubtedly the smallest plaque in Bristol, only just larger than a 30cm ruler . It’s located underneath Mr Langford’s once futuristic clock on College Green which took its time by telegraph from Greenwich Royal Observatory (bottom-right in the picture above).

The Bush, a celebrated coaching inn, once stood on this site. Edmund Burke used it as his campaign headquarters and in Pickwick Papers, Charles Dickens had Mr Winkle stay there.

This fountain commemorates Simon Short (b. 1824), a seamen’s missionary who was also a pioneer of cocoa rooms and coffee taverns, founded as an alternative to pubs by the temperance movement.

The Prince’s Theatre on Park Row opened in October 1867 and was destroyed in the Blitz of November 1940. In the opinion of George Bernard Shaw, its pantomimes were the best in the country.

Quaker Burial Ground – This small corner of Redcliffe was purchased by the Quakers in 1665 and used by them as a burial ground until 1923. It was given to the citizens of Bristol in 1950.

St George Park – Acclaimed entertainer Bob Hope lived in Whitehall and St George from 1906-08 before his family emigrated to the USA. This plaque was designed by local artist Mike Baker.

A rather less grand way than a tower and shopping centre to remember venture and navigator John Cabot is this pealing plaque on the Castle Park side of St Nicholas Street, a road where he once lived.

Temple Meads – Emma Saunders (1841-1927) was known as ‘the railwaymen’s friend’. This striking marble plaque featuring a carved likeness of Saunders.

Poet laureate Robert Southey was born in a house near this site on Wine Street in 1774. He edited the works of fellow Bristol poet Thomas Chatterton and was involved in an intriguing literary imbroglio with Lord Byron.

Read more lists all about Bristol