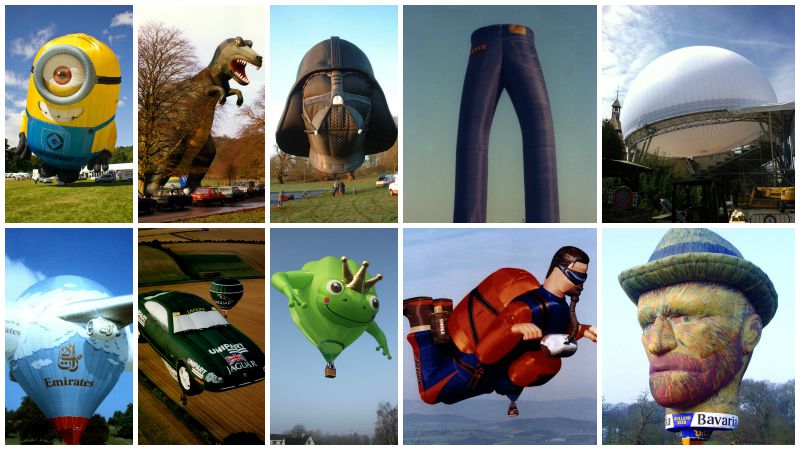 As the Bristol International Balloon Fiesta begins, Hannah Cameron, from Cameron Balloons in Bedminster, takes us through her favourite 13 shapes to have come out of the Bristol factory.

This is one of my favourites not just because of the size, but also because when it’s landing it looks like everyone is about to get chomped!

I have two children and I have seen all of the films with my two kids. Plus they are cute!

Not so much a special shape but this one went around the world in 1999 and we’re currently building another balloon this year for an explorer to take around the world again. It’s such an amazing adventure and breaking records is something we love being a part of.

It looks identical to the Jaguar xk8.

The roof is the shape of half a moon and it’s internally lit and sits over a concert venue. It’s always great to be a part of an art project using our materials and expertise to make something different and spectacular.

This plane is incredible because it is cold air inflatable and filled with helium, plus, it’s in the shape of a 747. It’s always a nice sight when you see it floating above the on-looking crowd with just cold air and helium to keep it floating.

This pair of jeans was made around 1972 and is one of our first ever special shapes. It’s a simple shape and it wasn’t difficult to make, but it’s one of the first the factory every made.

You have to include Darth Vader! I like this one as it represents a great icon with so much detail. It’s always well-received by the crowds and Star Wars fans.

This is a nice and simple balloon. It’s nearly a normal balloon with some extra material to make the shape. It also wears a T-shirt that says ‘kiss me I’m a prince’.

I really like this new balloon. It’s not a special shape, however it is really special, practical and super light. We’ve just invented a new range of super light balloons that can fit in the back of your car, which makes ballooning more accessible.

This one is as great one. When you stand the balloon next to Château de Balleroy in France, it’s an incredible sight and makes you think which one’s which!

This is probably one of the more difficult ones. We had his painting and we had to replicate every brush using 3D technology methods to give the effect of his work. We had to cut out every brush stroke and reapply . One of our proudest, but definitely hardest.

This last one came from Craig at Cameron Balloons. I was lucky enough to apply most of the artwork to this balloon. I remember the balloon flying over the Bristol Balloon Fiesta many years ago and the pilot ascended above the arena and then descended quickly with smoke trails coming out of the feet. It looked amazing watching this huge skydiver descend over the packed arena.