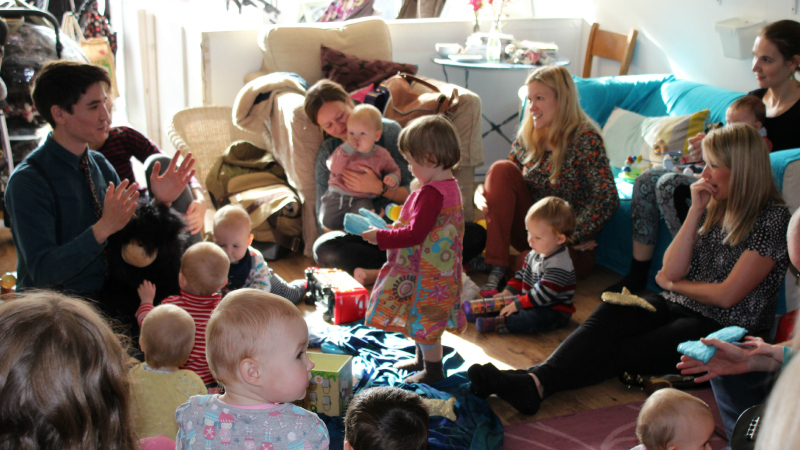 In 2012, McMaster University found that ‘one-year-old babies who participate in interactive music classes with their parents smile more, communicate better and show earlier and more sophisticated brain responses to music.’ Around the same time as the study, Josh handed his six month old daughter a small toy piano. She tapped it and the notes streamed out in a wild and beautiful baby cacophony. Josh explains: “The look on her face; she was making that powerful connection – between her kinesics and audio senses. Touch and sound; move your hand and make the noise. It’s a marvelous thing for children to experience. That spark of interest in music. It seemed so obvious that other children would enjoy it, too.”

So Ukulele Tots was born. There are many Bristol parents and carers out there who will think of cosy mornings with maracas and ukuleles in hand, delicious coffee and Bubbahub’s exceptional salted caramel brownies on the side, with pure, rosy joy. The elation on small face at being handed instruments and shaking, strumming and tapping them. Little arms swing as they dance with enthusiasm, bop up and down with each tune, pop bubbles in the air and wiggle down the river with the fishes. Sounds amazing, and it is. The tunes are remixes of classics; the addition of a ska, reggae, rock, or folk twist, as well as special creations like the Bubbahub song, which the Bubbahub staff request with glee. It’s genuine, fun, silly and you can see the babies grow inches with pride as they embrace their musical prowess.

Josh grew up in Brisbane, Australia, but now dwells in Bedminster with his wife and two and a half year old daughter. Four years ago, he was travelling with a group of musicians around Malaysia and South East Asia, meeting and connecting with people through music. “That was when music was set as an important tool in my life,” says Josh. It was in Hanoi, Vietnam that Josh also started working with two year-old children, as a kindergarten teacher. “I thought: what do you teach two year-olds? The answer was lots of free play, exploring and nurturing. It made me realise I could have children of my own.” He settled in Panang, Malaysia after meeting his wife, Anna. There they enjoyed living in a community, playing and teaching music. When they knew they were expecting Evie, they decided to move to Bristol, where Josh’s wife could complete a PhD and he could be a stay at home dad. “We just took a gamble, and it’s been lovely,” says Josh.

“It’s also been really strange, because there was a point when I had to let go of the things I wanted to do in my life. Which is a natural element of being with your child so often. You know that you can’t fit in the things that you wanted to do – but when I let go of this, it became an easier thing to think about. So I started to do things that could fit in with both of our lives, I had to adapt and children’s sing-alongs was it.”

There’s big change ahead for the family, as Evie is starting two mornings a week in nursery. Josh, who is still in a band, says he’s not sure what to do with this new time: “I will probably put more time and effort into the night classes for adults. Less stealing time at night.” Meanwhile Ukulele Tots will continue to flourish, as more children of Bristol learn their first musical notes in Josh’s student-centred classes. What glorious students they are, too.

Josh’s passion for music is infectious, as everyone bounces up and down for the rabbit song – bounce, bounce! “I love teaching, it’s so much fun. It’s a free gateway to meeting an interacting with people from all different ages. If you have the skill to teach, you get a free pass, you learn about them and their learning styles. I have taught babies, kids and adults, and everyone is so different, everyone learns in different way.”

Ukulele Tots is on at Bubbahub on Monday and Thursdays at 10.30am. Adult classes are also available, check out Josh’s website: music4humanity.weebly.com/