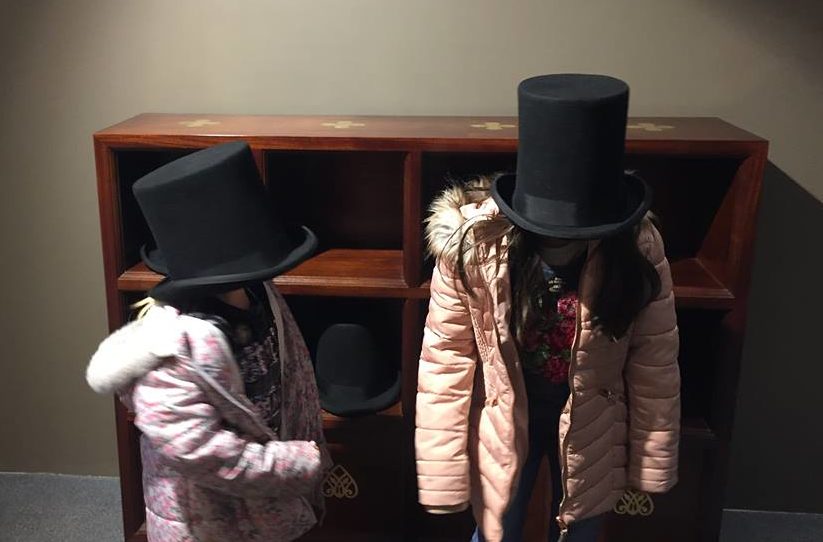 Educational and yet fun at the same time: that’s the winning combination when it comes to children’s activities – and Brunel’s SS Great Britain has just the right mix. On a cold and slightly wet day during the school holidays it can be hard to know what to do to entertain your little ones, but a museum steeped in local history can be a great option.

Up close, the ship that was built in this very dock in Bristol and designed by Isambard Kingdom Brunel for the Great Western Steamship Company’s transatlantic service to New York is very impressive to look at, no matter what age you are. At the time she was built, she was the longest passenger ship in the world, and the first iron steamer to cross the Atlantic – a feat she achieved in just 14 days. 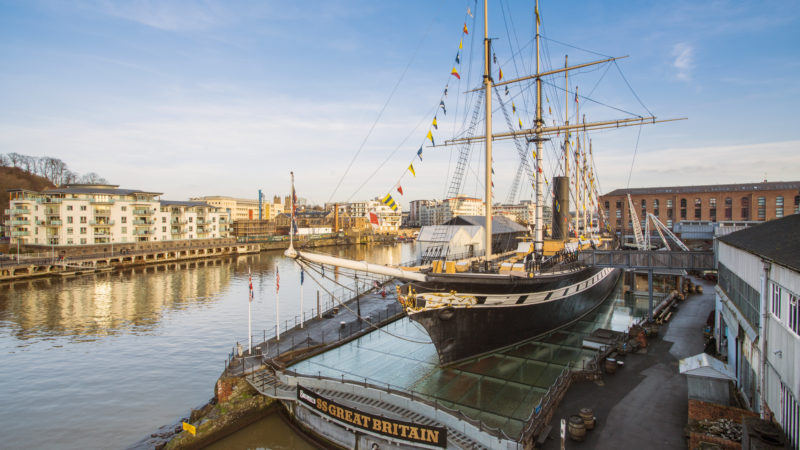 At the entrance to the museum, my two small charges and I were greeted by a very friendly member of staff and given guidance about everything that is on offer to see. Having never been before, I was as excited as the little ones to learn more about this special ship and also about the main man himself behind it all. Fun fact: I used to live in Brunel’s London property several years ago in Paddington, so I feel strangely connected to this historic engineer.

The first thing we did was all go into the Dockyard Museum, where we learned more about the history of the SS Great Britain. There was a film, many objects and an interactive game involving steering a ship’s wheel that could all be taken in and enjoyed. People of all ages were reading the information and it was a delight to hear my daughter telling her younger cousin what the words said on the plaques.

As we made our way through the museum, we eventually ended up on the top deck of the boat itself – an experience we all particularly enjoyed. The ship felt even bigger from up there than it did from looking up at it and it was fun to walk the full length (322 feet) that so many people would have done throughout history. The mooing plastic cow caught us off guard and made us giggle and the chickens in the coop were adored by the girls.

As we then descended the stairs into the actual heart of the boat, we all said that it felt a bit spooky and marvelled at how old it was. My daughter thinks I’m ancient at the age of 38, so when you talk about different centuries, it blows her mind.

I could totally see why this is an award-winning visitor attraction and being located in the Bristol Harbour makes it a monument for this city to be proud of; it receives between 150,000 and 200,000 visitors annually and is always a popular place for school trips and international tourists. 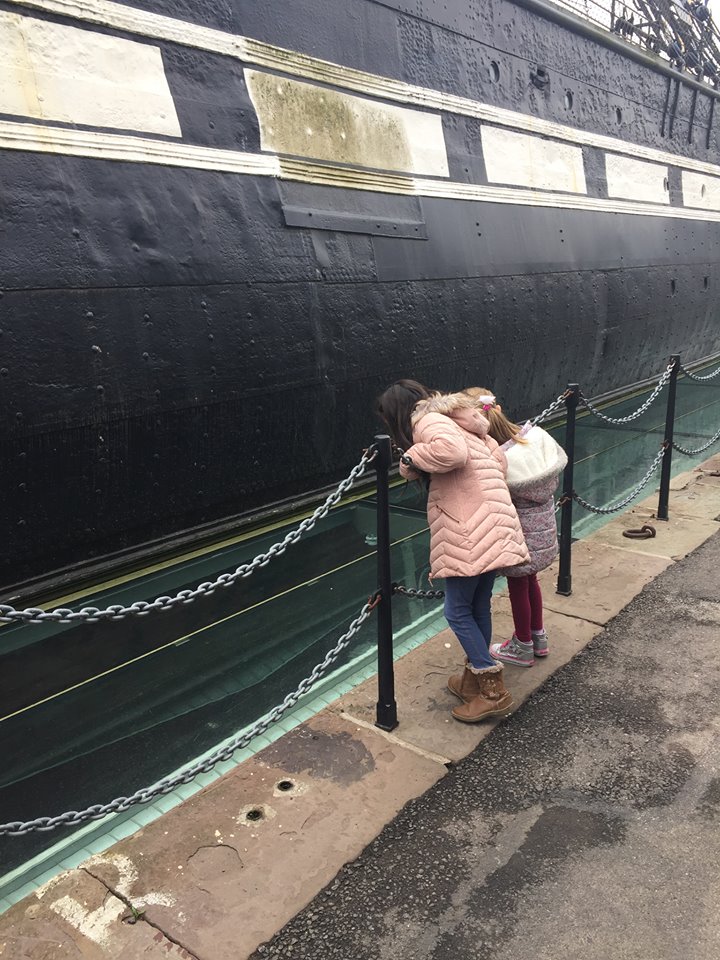 After we explored all the levels of the SS Great Britain, including the sleeping quarters and an exquisite dining room on the lower deck, we then decided to head beneath the glass sea and see the very bottom of this beautiful ship. Here we could truly enjoy the smells of this time machine as it was quite damp and atmospheric down there.

Finally, after we got back to ground level and were back on solid footing, we took in the new Being Brunel exhibition, which launched at the end of March 2018. This particular part of the museum is about exploring the life and legacy of Isambard Kingdom Brunel and there was a fascinating collection that could be admired. Entry for this part was included in the admission price and as soon as we walked in, the girls had a giggle trying on the range of classic Brunel black top hats.

We then enjoyed stepping into Brunel’s dining room as it looked in his home of 18 Duke Street in London. The highlight for the children, however, were the moving train carriages, where they could sit and pretend they were on a journey somewhere. 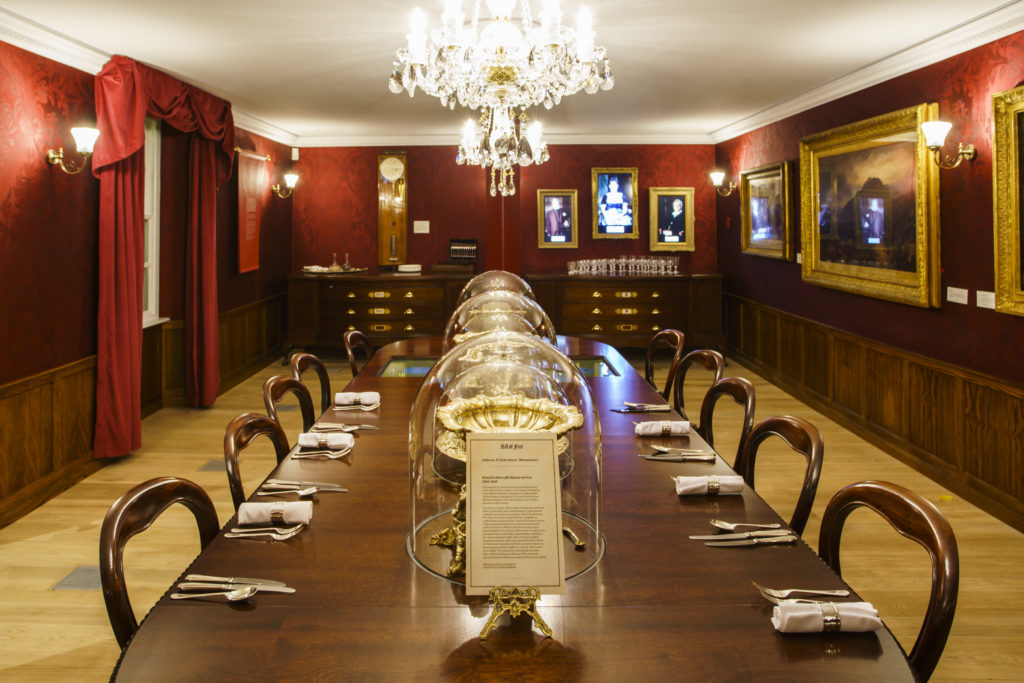 Brunel’s dining room, as recreated in the Being Brunel exhibition

After a good few hours of exploring all that there was on offer, we exited the museum via the Harbourside Kitchen, also run by the team at SS Great Britain, to enjoy drinks and snacks and reflect on what had been a truly lovely trip to the historic ship. Even though my daughter is only seven years old and her cousin is five, both of their attentions were held enough throughout our visit for the experience to be classed as a successful one.

The SS Great Britain is the sort of place that you can enjoy time and time again due to the various different relevant activities that are put on. If you haven’t yet discovered this slice of local history, don your sea legs and give it a go.

Tickets to SS Great Britain cost £16.50 for adults and £9.50 for children. Under 5s go free. The ticket grants unlimited free returns to the museum for a whole year. Find out more and book online for a discount at www.ssgreatbritain.org