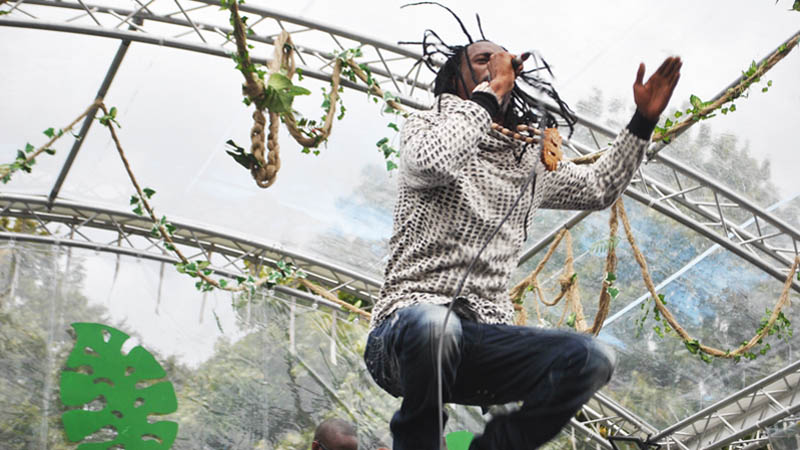 With little in the way of hype or fanfare, Tokyo World has sneaked into position as one of the most anticipated events in Bristol’s festival calendar. Right at the end of festival season, and just before the clubs kick back into gear in October, the event’s last-fling-of-the-summer feel is an important part of its appeal. This year the sense of living on borrowed time is reinforced by the weather, which stays fine throughout despite the presence of threatening grey clouds, and finally gives way to a biblical downpour half an hour after the music stops.

Tokyo World is an impressively staged event, from the quality of the soundsystems to the elaborate stage designs. The main performance spaces include an inner city tower block and an active volcano, with lava bursting intermittently from the top of the stage. It’s here that Big Narstie is seen hyping the crowd in his familiar role as the court jester of the UK’s grime scene. Meanwhile, the tower block – hosted by drum & bass stalwarts Mutiny – is already stepping hard to the machine tooled breaks  of Icicle, while the heaviest bass weight is coming from the Pulse stage, as Joe Ariwa and General Levy summon carnival vibes. With its rootsy programming and tropical foliage, this relatively small stage feels like the heart of Tokyo World, recalling the event’s origins in reggae soundsystem culture. Joe Ariwa’s selections run the gamut from dub and dancehall to jungle and tropical house, and Levy (see main image, above) remains a thundering presence on the mic after decades in the business.  For all their prowess as party-starters, The Heatwave seem a bit lacklustre in comparison today, and there’s a whiff of Nathan Barley about the onstage banter.

DJ Luck and MC Neat‘s set on the Live stage has a Kisstory feel to it, with safe but crowd-pleasing selections of vintage UK garage and more recent grime hits. Meanwhile, things are getting rowdy over at the Volcano, where party bass collective Tonga are having a party of their own onstage. A collaboration between Manchester’s Murkage cartel and Mike Skinner of The Streets, their unholy fusion of grime, dubstep, hip-hop, house and trap is pretty close to being the ultimate festival bait. With Skinner on the decks they end with Skream’s ecstatic remix of Blinded By The Lights. Unsurprisingly, they’re not an easy act to follow. Shakka – or “Shakka with two Ks” as he describes himself – is clearly a talent to keep an eye on but his blend of reggae, rock and R&B is a little too polite and laid-back for this late in the day.

As night begins to fall we’re in the mood for something more immersive so we head to the Shapes stage, which has been pumping out high quality house and techno since the gates opened. Livity Sound – aka Bristol trio Peverelist, Kowton and Asusu – are expertly preparing the crowd for the arrival of one of dance music’s undisputed living legends. Their wonderful set builds subtly from loose, jacking funk to pummelling techno demonstrating that they’re among the most intelligent selectors on the scene right now. Their last selection – Dizzee Rascal’s rudeboy anthem Stop Dat – is a delicious curveball, righteously cleansing the palette for the masterclass to come.

Last year it was Jeff Mills, this year the Detroit master enjoying a rapturous reception in Eastville Park is the equally iconic Carl Craig. Most of the crowd weren’t born when Craig emerged as a leading light of techno’s second wave, but his sublime set blends spotlessly between old and new and proves irresistible to the big crowd assembled in front of the Shapes stage. From soulful house to robotic funk and skyscraping trance, Craig’s inspired track selection and impeccable mixing leave no doubt that we’re in the presence of one of the true greats of modern dance music. In a nod to synth pop’s influence on the original Detroit movement, he ends with a remix of Eurythmics’ Sweet Dreams (Are Made of This).

While topping Craig’s set is virtually impossible, we’re spoiled for choice during the last ninety minutes of Tokyo World as the various stages race to the finish. Goth Trad lowers the Pulse with cone-shattering minimal dub vibrations, and Daniel Avery brings state of the art bleeps and acid to the Shapes area. Grime mastermind Wiley erupts onto the Volcano stage with help from friends like local MC Grim Sickers, while Hazard and Skibadee burn down the Mutiny high rise.

For our money, though, the deadliest late arrival is Bristol’s own Kahn, who headlines the Pulse stage with a truly dread set of funereal dub and blackened grime. As thousands of satisfied punters file out towards the taxis and chicken shops, and onto house parties or the official after-show at Motion, it would be hard to think of a better way to say goodbye to a vintage summer of outdoor music.