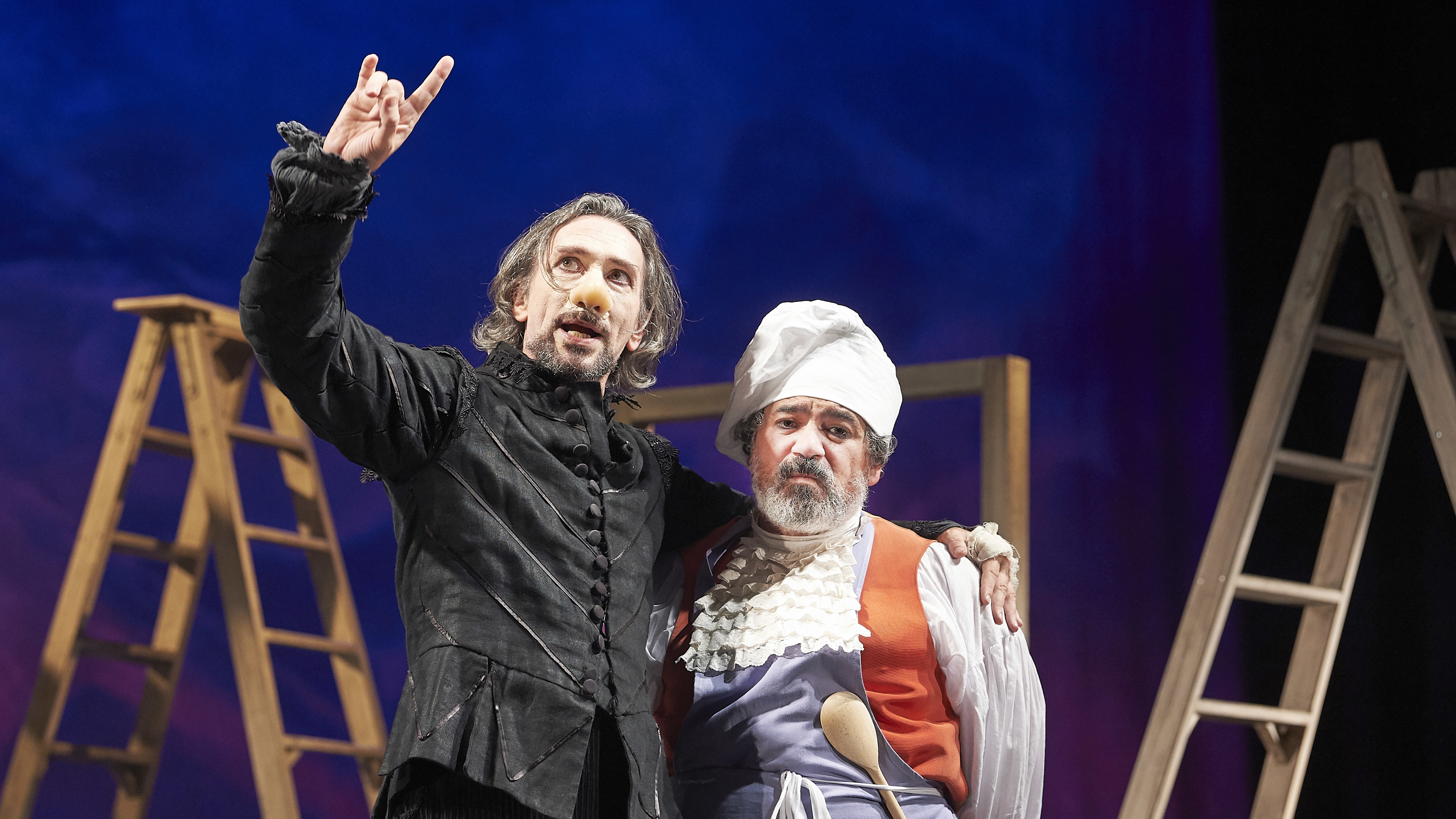 It’s a common trope in comedy (recently trotted out in ITV’s Plebs, no less): two lovelorn souls vie for the attentions of the same mesmerising creature. Yet neither quite hits the mark – one fizzing with wit and depressing looks, the other dazzling like Selfridges’ Christmas window only to be let down by storyboards written by a three-year-old.

Step forward with a flourish Cyrano, a talented poet blessed with an impressive hooter, and Christian, a good-looking lad with a primitive command of English (“I need some motherfucking eloquence!”). Both fall for the beguiling Roxane, Cyrano’s cousin and childhood friend. Spoiler: it doesn’t end well for any of them.

Bristol Old Vic’s take on this simple two-boys-meet-girl story is a rapturous one. The circular structure of the play means that both the beginning and end are poised and moving – nuns clad in white chant on the pleasure and pain of love as they glide across the stage, encircling a long-grieving Roxane, “My heart broke once and still breaks”. 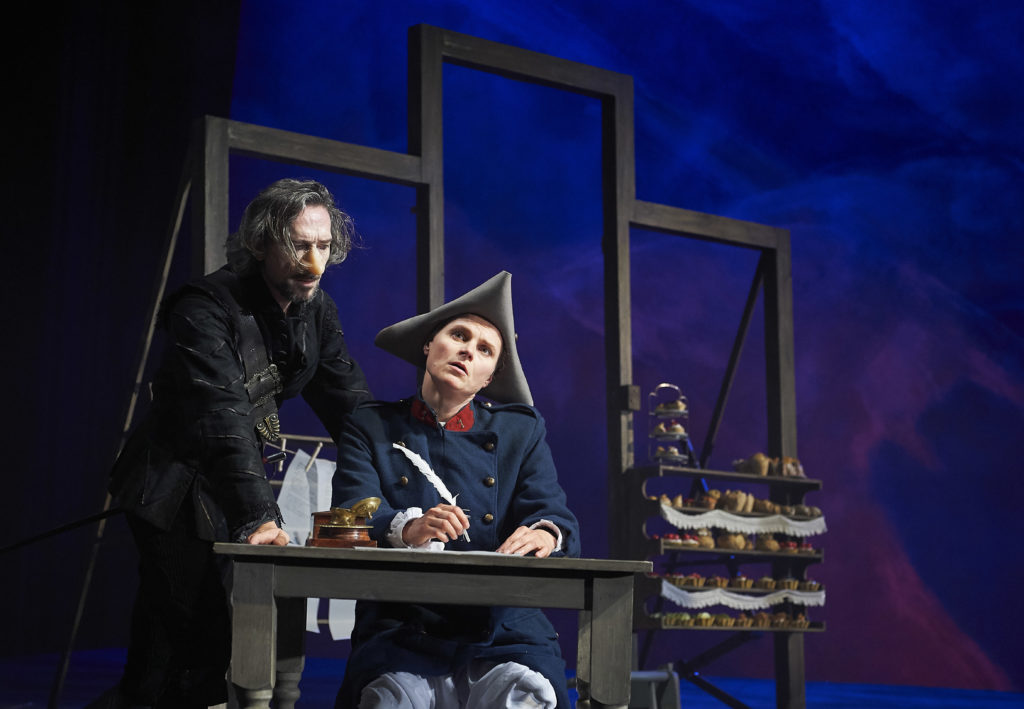 Cyrano appears: a frail man, on the edge of life, but ever the wag (“You have nothing to lose but your teeth, your spectacles…”). In a heartbeat the mood lifts, as we travel back 18 years to witness a vigorous and debonair Cyrano, and a vivacious Roxane, and follow the unravelling of their story of love and loss.

The seven-strong cast command the stage at all times, playing a variety of parts with seamless ease and spirit. A nun here, a simpering usherette in frilly pinny there, and Raguneau the chef in between, Miltos Yerolemou gives a delightful baking demo as he shimmies and pummels the ingredients, popping out of the ‘oven’ when browned to perfection. 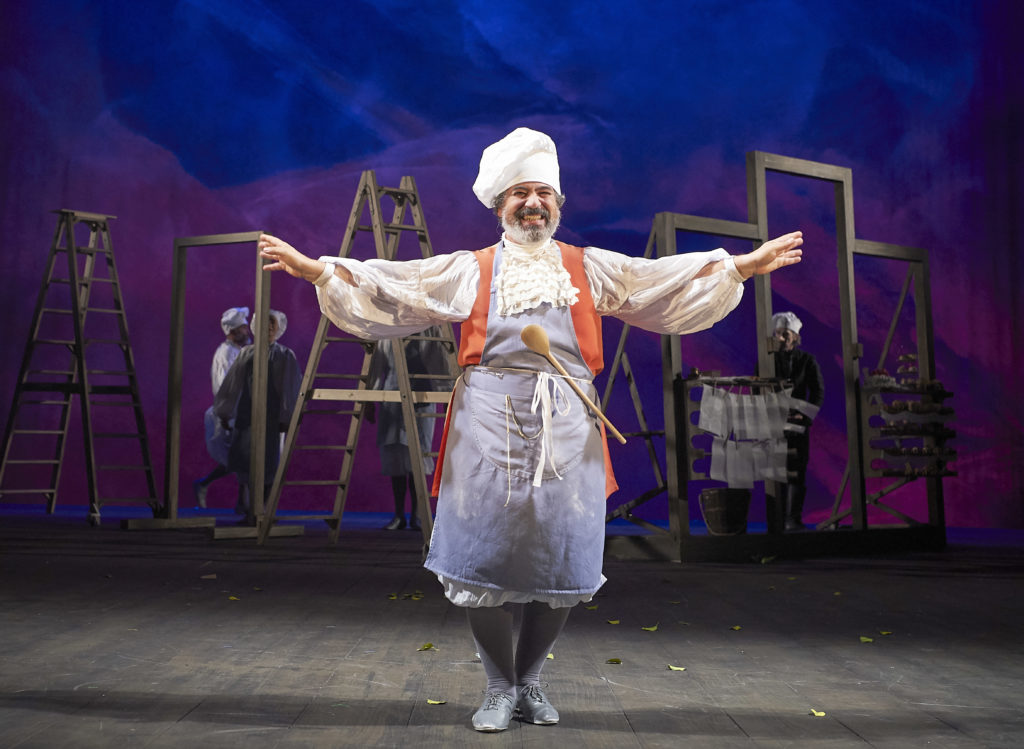 Other joyful moments include the touching friendship between Cyrano (a mesmerising performance from Tristan Sturrock) and Le Bret (the dashing Guy Hughes); the beautifully choreographed, feverish penning and pondering to music as Cyrano declares his love for Roxane on behalf of Christian (nimbly played by Patrycja Kujawska); and the Comte de Guiche’s (a sonorously voiced and commanding Felix Hayes) withering “That was mercifully short”, after some musical audience participation. 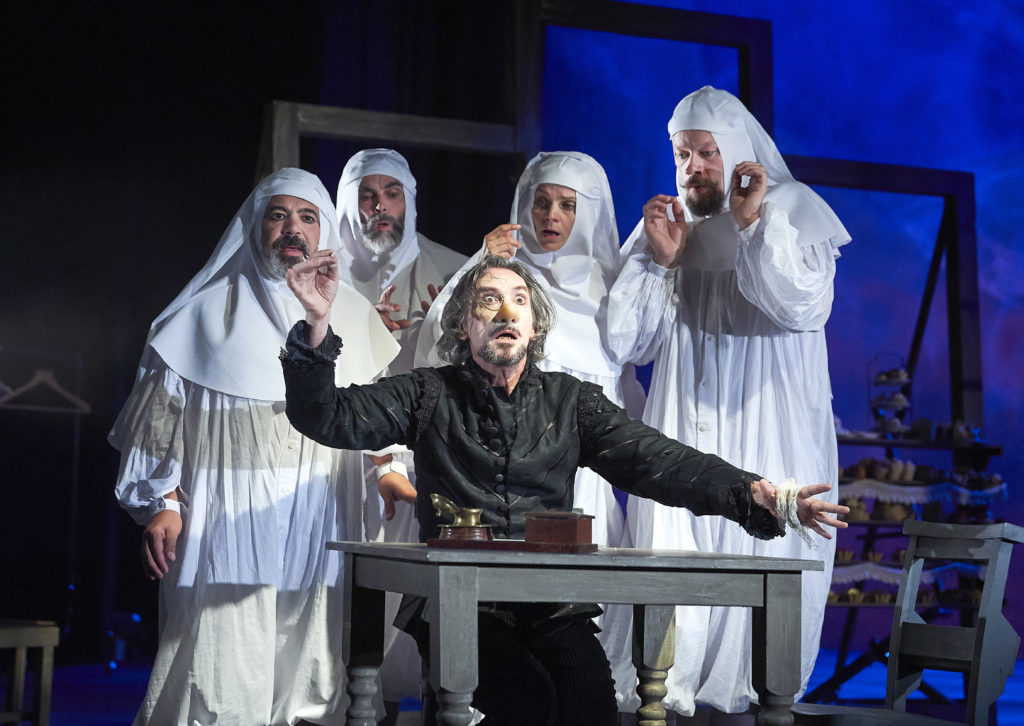 There’s almost a panto atmosphere at times, with plenty of eye contact and quips directly to the audience, which only serves to enhance the dramatic tension and despair in part two. The war the Gascon Cadets fight is extraordinarily enacted with booming gunfire that you can feel through your seat, conjuring flashes of orange against an inky sky.

Throughout the shifting revelry and sobriety, Peter Oswald’s new translation manages to be on point for a modern audience while embracing the mellifluous poetry of the original. It’s a testament to Tom Morris’s direction and Tristan Sturrock’s charismatic performance that after a while one becomes immune to the ‘living architecture’ on Cyrano’s face. If only every nose could smell as sweet…