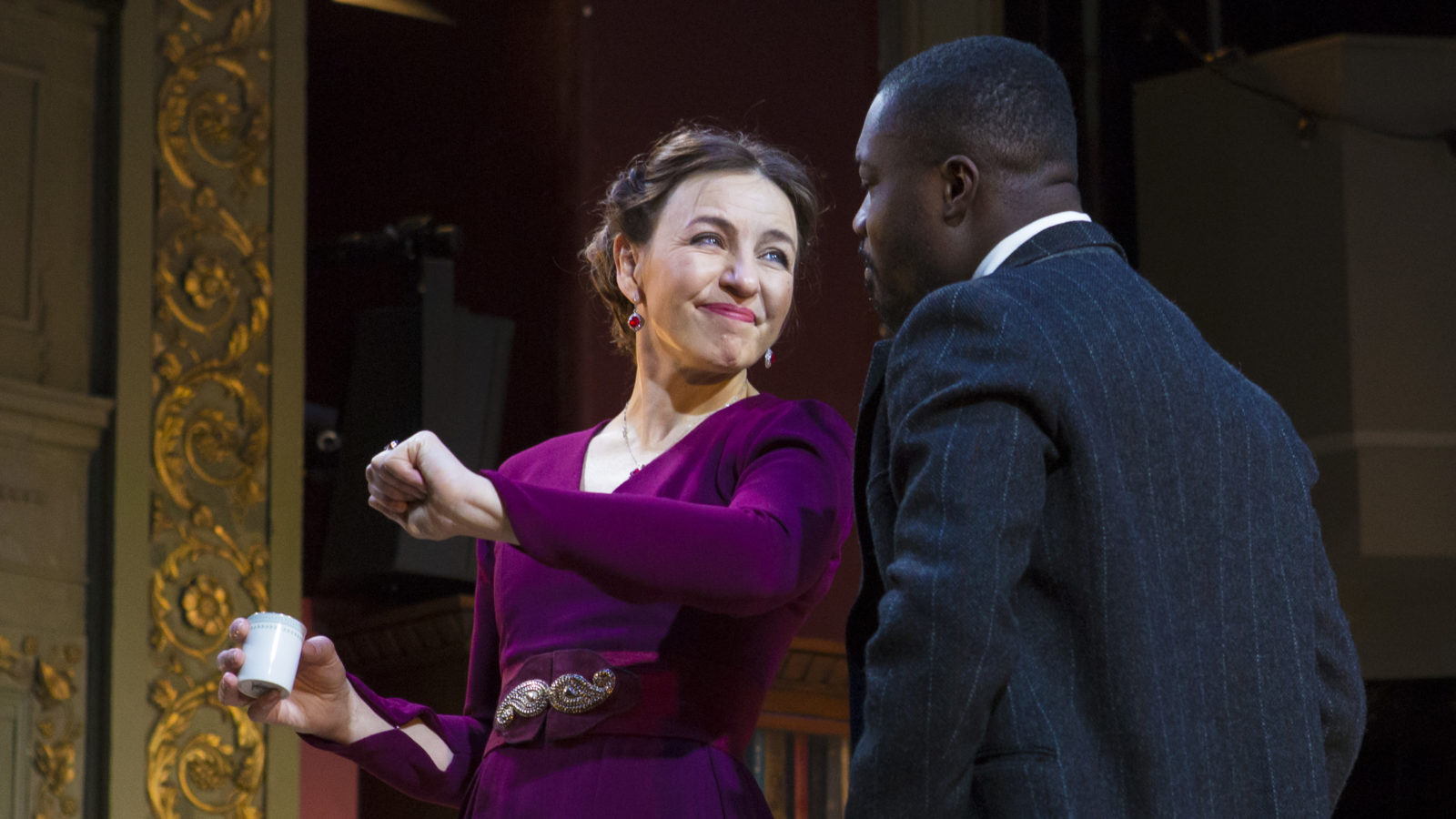 “I have bought the estate where my father and grandfather were SLAVES!”

These words, roared out in a mix of triumph and bewilderment by the self-made landowner Lopakhin (Jude Owusu), sum up the thrust behind the action of Chekhov’s last masterpiece.

We are on a large and beautiful country estate in Russia, circa 1900, some 40 years after the emancipation of the serfs brought seismic changes to Russian society. Here (and doubtless everywhere across Russia), the former serving class (as personified by Lopakhin) are on the way up, and the aristocrats – the lady of the house Lyubov Ranyevskaya (Kirsty Bushell) and her family – on the way down. This changing dynamic is seen most powerfully, and most heartbreakingly for Ranyevskaya and her family, in the family’s bankruptcy and need to sell off the country estate – in particular its vast, beautiful and renowned (“it’s in the encyclopaedia!”) cherry orchard. 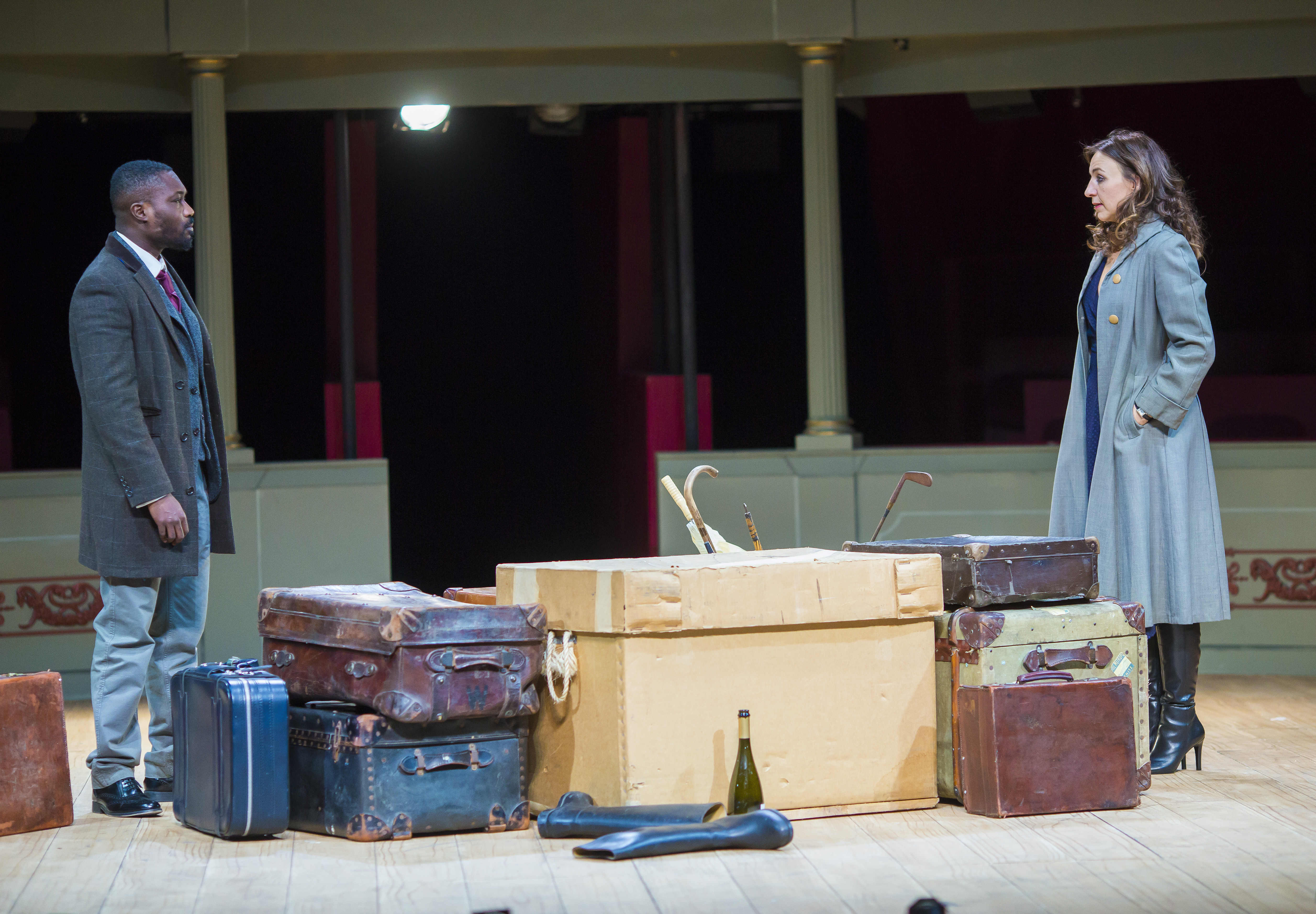 As symbols of the two different worlds both so shaken up by the changes, and also as two characters with their own very particular set of feelings towards each other, Ranyevskaya and Lopakhin need to anchor the play with two strong performances – and golly, they do here, with mesmerising turns from the two leads.

Kirsty Bushell’s expressive features beautifully track the quickly-changing moods of Ranyevskaya: her joy at returning to her family home after five years away, and pain at recalling the tragic event that forced her away; her high spirts at being reunited with the household in the dances, picnics and talks of old, and her deep pain at the loss of her childhood home and beloved cherry orchard. 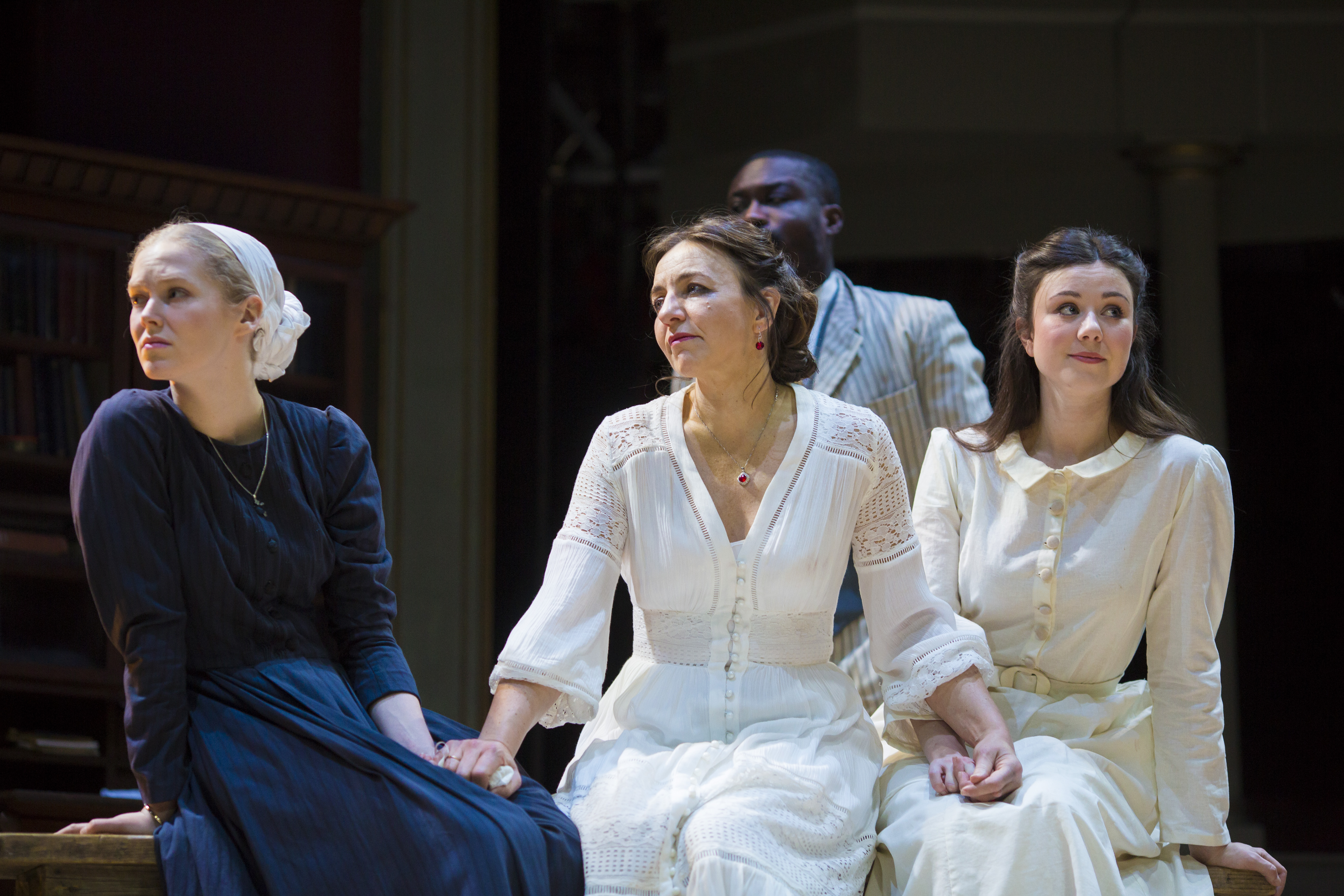 Owusu captivates as Lopakhin, the merchant born into lower circumstances than, and now wealthier than, anyone else in the play – and able to secure or shatter the family’s future. Owusu has a confident swagger and a fiercely driven glint in his eye – but he is also a man of great empathy and emotional depth, as witnessed most strikingly on his return from the auction where he has, unexpectedly, purchased the very estate where his ancestors laboured as landless serfs. 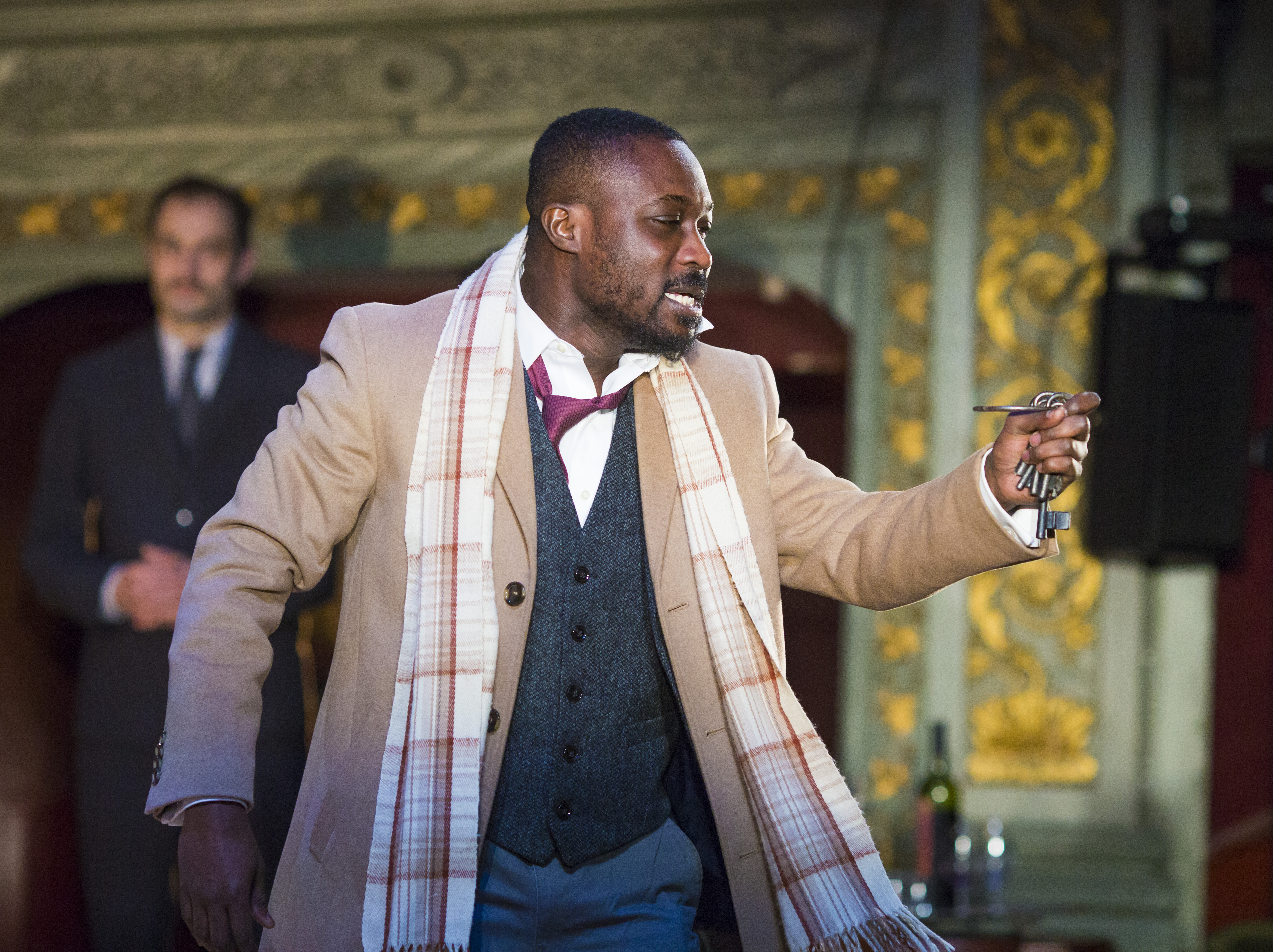 Owusu’s mixture of swagger, emotion and sheer what-the-hell-have-I-just-done amazement is captivating – and moving. And his feelings towards Ranyevskaya, and the salvation he could (but never feels quite able to) provide, forms one of the play’s great tragic undertows.

Truth to tell, there are hugely watchable performances everywhere under Michael Boyd’s direction. Julius D’Silva is hilarious and tragic by turns as Simeyonov-Pischik, Ranyevskaya’s neighbour and fellow aristocrat, similarly fallen on hard times thanks to circumstances and his own unworldly fecklessness and indolence: a great gentle bear of a man, extravagant of gesture, always trailing a request for money in his considerable wake. 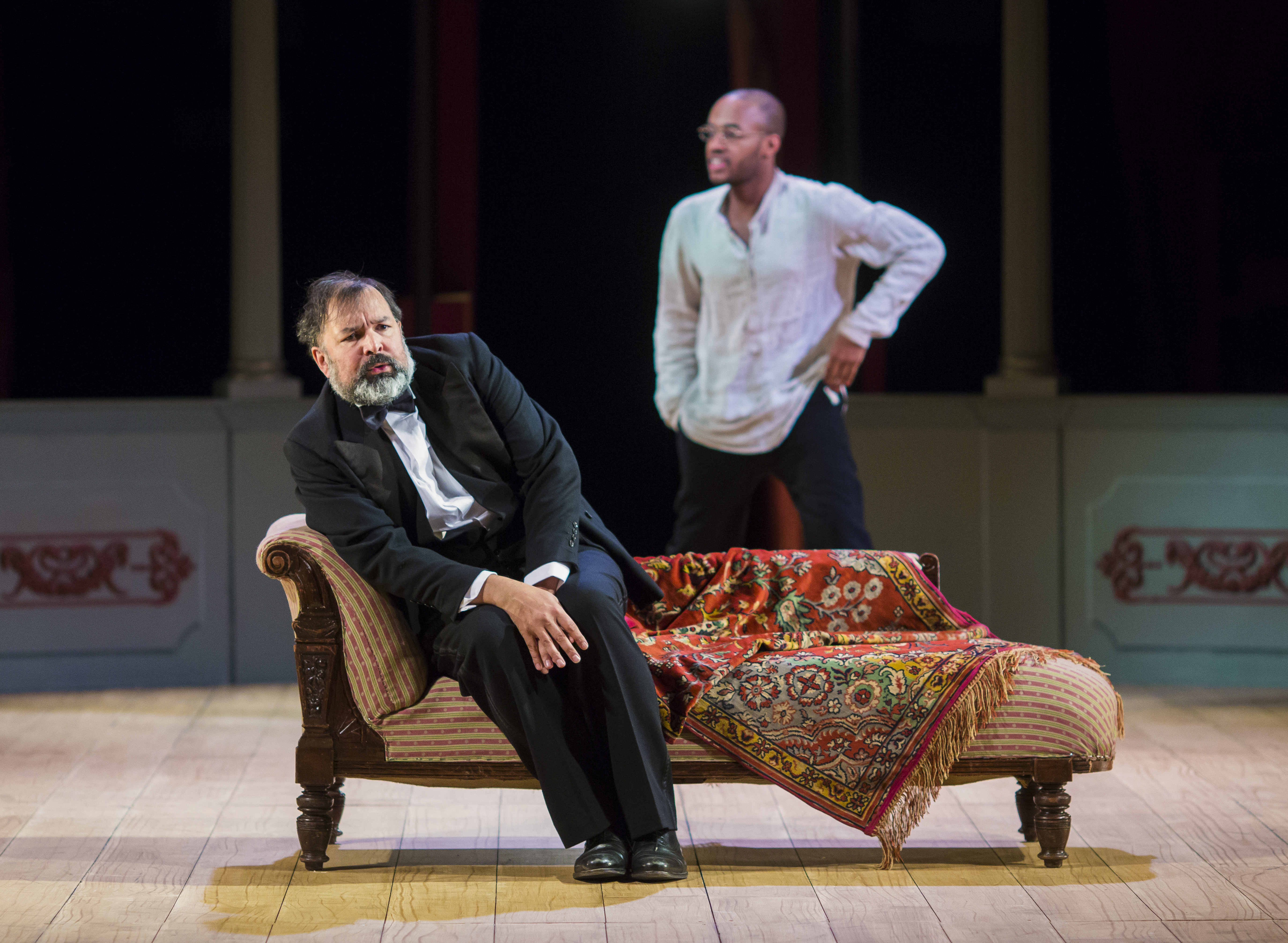 Eva Magyar (remember her from Kneehigh’s original Tristan & Yseult at this same theatre some 13 years ago?) is captivating as Charlotta Ivanovna, former governess to Ranyevskaya’s now grown-up daughters, a captivating but rootless soul thrown into limbo, like so many others, by the play’s momentous events. Jack Monaghan brings plenty of the comedy (and there’s more of the latter in Chekhov than you’re led to believe) as the pompous, stilted and clumsy estate clerk Yepikhodov, from whom no sweet young country girl or priceless antique table are safe. Togo Igawa brings a great old-world dignity to Firs, the old butler who mourns the old pre-emancipation days and who will be more betrayed than anyone by the end. 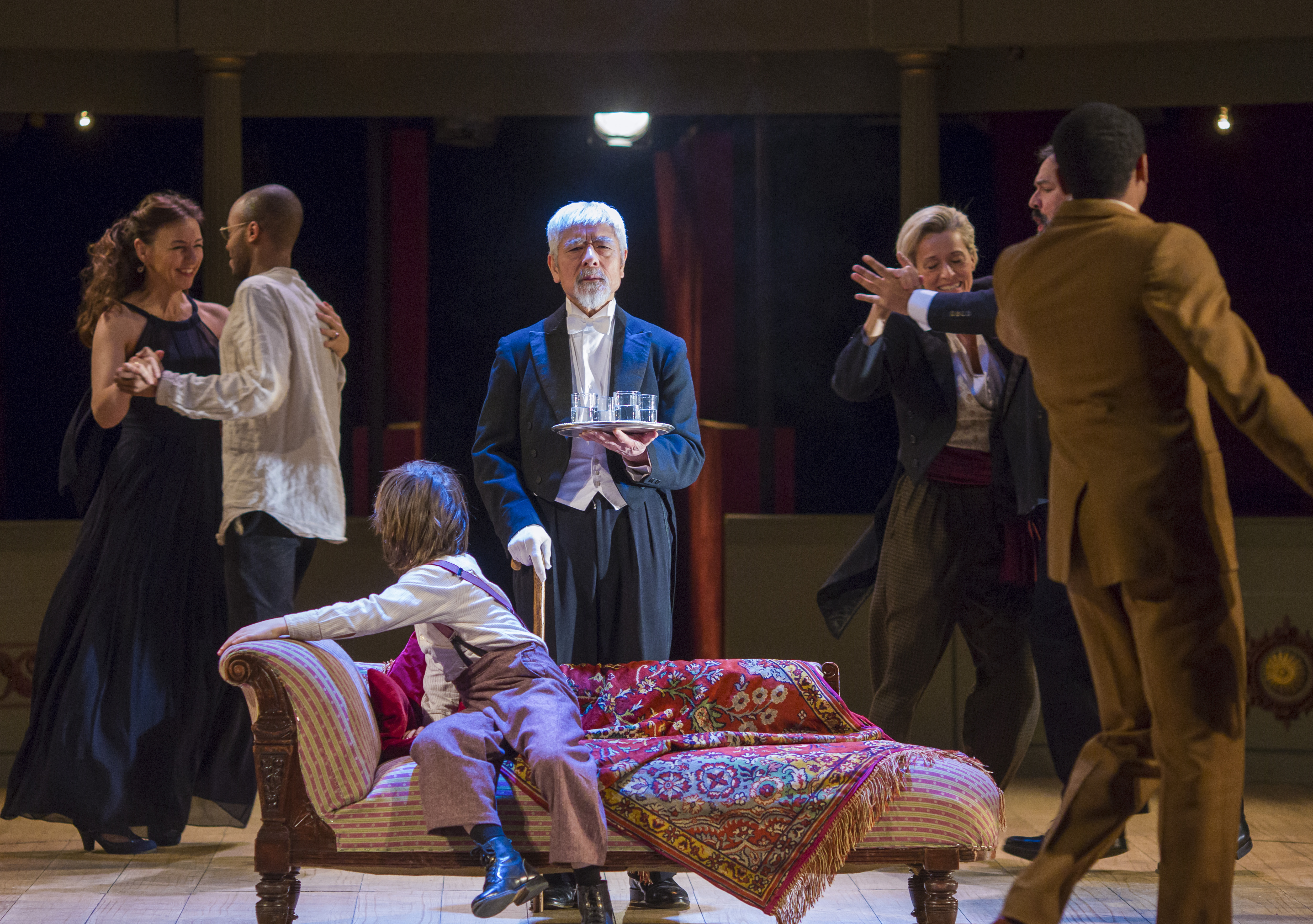 I could go on right through the cast: there’s not a weak performance here: every role, large or small, captivates. This includes a role generated especially for this production, a character from the family’s past usually only mentioned in passing but here a ghostly and powerful presence.

The staging works beautifully, too. It’s done in the round, adding to our sense of being up close and among this family and their languid procession of picnics, walks, earnest conversations and drunken dancing throughout that fateful summer. And there’s a marvellous sense of place engineered by a few small but brilliant touches with light and sound. As Ranyevskaya and her family gaze out at the cherry orchard early one morning, a drowsy dawn chorus starts up, the lighting mimics that thin first light of a summer morning: you almost feel yourself among the white blossom. 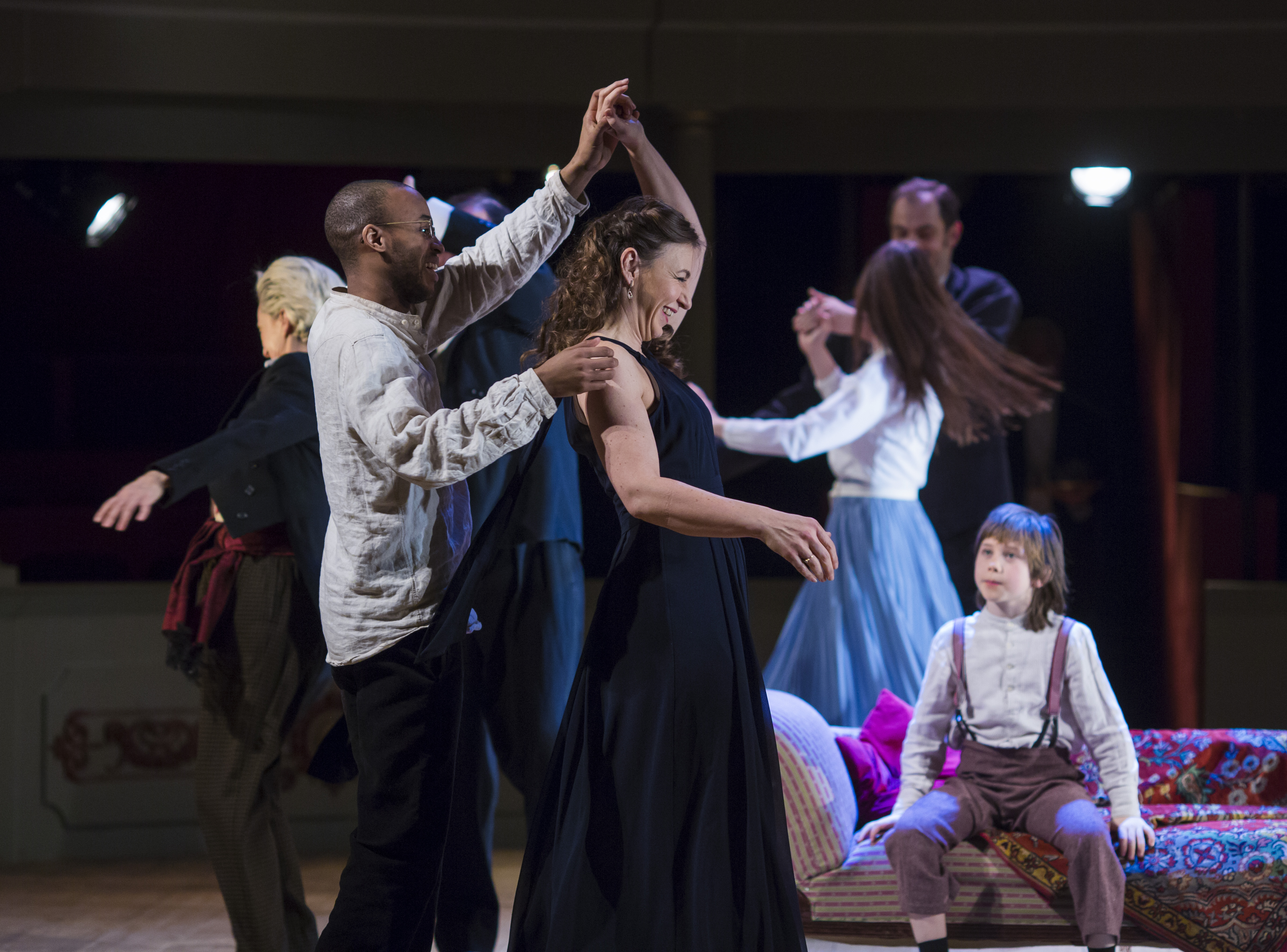 Though there’s lots of wry humour along the way, The Cherry Orchard’s final destination is heartbreaking for some of its cast, and transformative for all. That journey is beautifully rendered in this evocative and committed production.

The Cherry Orchard continues at Bristol Old Vic until Saturday, April 7. For more info and to book tickets, visit bristololdvic.org.uk/whats-on/the-cherry-orchard