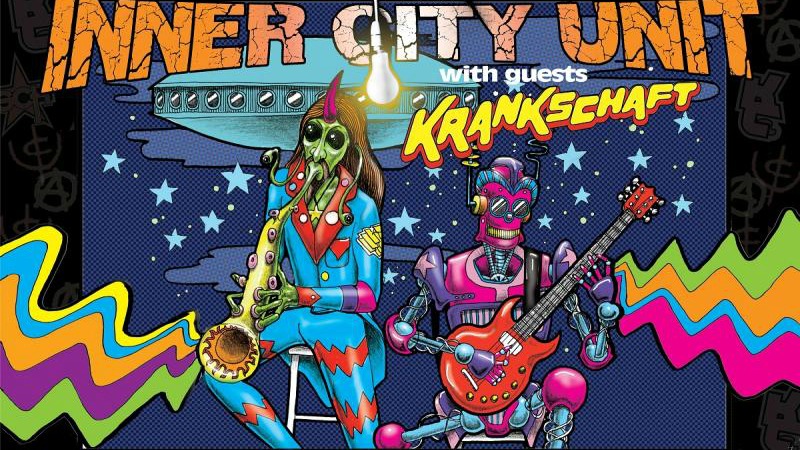 Few musicians have to endure a stage invasion by their own grandchildren. But while not being quite as old as the expanding universe itself, veteran space rocker Nik Turner turns 75 today. Naturally, everybody sings Happy Birthday as he’s presented with a small cake and an intentionally shoddy card by his smirking band. The aging Thunder Rider seems quite moved and remarks that he wouldn’t be here without us. “We wouldn’t be here without you too!” shouts a punter, which may be literally true given how many members of the Turner family appear to be in attendance.

First up are ICU guitarist and all-round man of the match Steve Pond’s other band, Krankschaft. Wrongfooted by their name, the unwary might expect some kind of Cope-approved hypnotic motorik groove. But with barefoot former Enid bassist Alex Tsentides on board, the trio trade in an appealing psych/prog hybrid. It’s all deceptively well-drilled while pretending to be shambolic. Apparently, there’s some kind of overarching time-travelling theme to the stuff from their new album – a concept work, obviously – but knowledge of this is no pre-requisite for enjoying their epic wig-outs.

It’s clear that many in this packed audience have been waiting patiently for 30 years for an Inner City Unit gig. The band kept Turner occupied during periods when he’d been booted out of Hawkwind – primarily, it is alleged, for excessive parping – by broadening his appeal to the punk/free festival crowd. Now they make an unexpected, very welcome return as one of myriad projects undertaken by the busy septuagenarian saxophonist. He’s less nimble on his feet these days – who wouldn’t be? – and has to squint at the set list between songs, but still plays the hell out of his sax and flute. A big mistake, however, is taking the lead vocals on most of the songs. Never the greatest of singers, his wavering voice now has only a passing acquaintance with the concept of being in tune during thrashy space-punk opener Watching the Grass Grow. Things only improve when he shifts to a lower register for the likes of ICU’s Brand New Cadillac cover or droll guitarist Pond joins in to add some vital vocal welly.

Still, there’s plenty of nostalgic fun on offer with a diverse set list that more than lives up to the billing of “a rock’n’roll spectacular evening of spaceyprog acid punk”. And on this last date of the tour, the rhythm section of Nazar Ali Khan and Kevin Walker are on particularly excellent form. Punk? Take your pick from Skinheads in Leningrad, Sid’s Song (about Sid James rather than Sid Vicious, alleges Pond, who insists that the cackling Carry On star’s punk credibility has been overlooked) and Blue Rinse Haggard Robot – composed to honour a previous “lady prime minister” and featuring those immortal lines: “Little girls are pretty/Robot, you’re not/You’re a cunt!” Rock’n’roll? Here’s the preposterous Fungus Among Us and aformentioned Brand New Cadillac. Space rock? Turner’s signature Hawkwind songs Brainstorm and Master of the Universe, obviously. There’s even a dash of reggae (Remember Margate Beach) and Bonzo Dog Band-style surrealism (that cover of the Nightcrawlers’ Little Black Egg). Oh, and ICU’s greatest song, Bones of Elvis, during which Turner dons a ridiculous Elvis wig.

He also contributes much entertaining between-song anecdotage, with Pond on standby to launch into another song whenever things threaten to get too rambling. Solitary Astrid (also known as Solitary Ashtray) prompts a reminiscence about being raided by the Special Patrol Group back in the ’70s after coming out in support of Baader-Meinhof gang member Astrid Proll. It also emerges that Two Worlds was inspired by the roaring in his head after experiencing his old pal Lemmy’s Motorhead at the Hammersmith Odeon, during which he failed to recognise Status Quo’s Rick Parfitt. That autobiography really can’t come soon enough.

Thanks to Pond’s impressive ringmastering skills, the gig finishes ten minutes early, permitting the hasty addition of two short songs: Raj Neesh, ICU’s hilarious pisstake of orange-clad Bhagwan cultists (they were big-ish in Bristol in the ’80s, y’know) and a hyperspeed romp through Glenn Miller’s In the Mood, which gets hippies old and young dancing like fools.