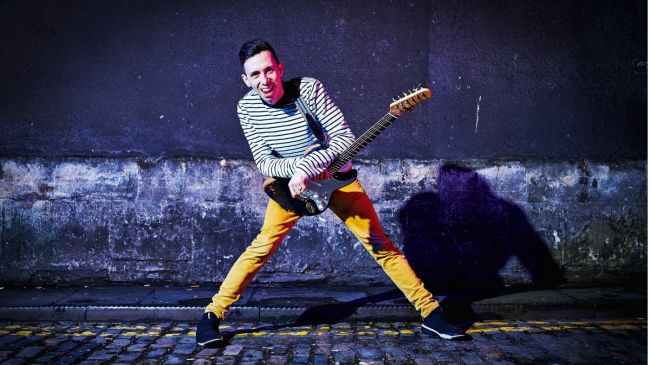 From the get go it’s clear that this is a show without pretence – on come the band to a cheering crowd only for Wong to stand at the mic, finger aloft, while he lengthily tunes his signature Sapphire Strat. With the tuning of the final string, they launch into the 21st Century Fox theme tune. It’s cheeky and excellent – the tone is set.

Funk riffs are flying from the first real number, a souped-up version of ‘Limited World’ from 2019’s Elevator Music for an Elevated Mood, and Wong jams the chords at a hundred miles an hour. It’s a musical rollercoaster that has the crowd whooping its grooves one moment, and the next has the room suspended in space when the energy gives way to slow swaying rhythms.

For all his youth and popularity, Wong is in a totally different category from the tortured artist who directs the focus inwards and sings from ever-present angst; instead he plays with a perpetual sense of joy. Apart from their acute sense of Britishness, the only thing stopping this crowd from dancing more is SWX’s sticky floor.

Of course, we do need those tortured musicians – they are musical Atlases bearing the weight of our turmoil and giving us a reference point in our strife. We get a release from screaming those anguished lyrics at the top of our lungs. But what Wong offers is a different kind of catharsis, delivered with pure enjoyment. This is the man with an album called The Optimist after all.

Despite his creds – a stellar reputation in the Minneapolis jazz scene, recording extensively with Vulfpeck, and touring across Europe and the States – he’s a bit of an anti star, which is possibly why The Current labelled him the “most famous Minnesota musician you’ve probably never heard of”.

In 1983, Madonna told American Bandstand that she wanted to rule the world – we could believe that only a person so self-inflated as to say something like that could become as big as they want to be. But must the performer’s ego really be so enlarged in order to function well? Wong’s reasonable attitude isn’t at all to the deficit of his showmanship – it’s captivating to watch this natural comic is having the time of his life up there.

His albums are peppered with collaborations and his desire to share out the fun extends to the live show. On Wong’s stage everyone gets a go and the band turn-take like members of a jazz collective, giving each number an abstract structure compared to the linear build-up of pop and rock.

Tracks are reimagined and rehashed to the extent where only the main themes are recognisable. Dirty acid jazz lines are spaced out and slowed to a standstill, then warmed up into seductive grooves, only for the band to flip a riff on its back and charge full-pelt with it, adding in all the accidentals and drum fills they can muster.

Slower numbers are beautiful; Wong meanders his way through the pull-offs and slides of ‘Meditation’, which builds slowly and closes with a shimmering cymbal finish.

At times the band approaches a wall of sound – albeit one papered in a ‘70s groove print – when they stack chords high, and Wong’s guitar, which barely strays from a clean sound, doesn’t do much to change up the flavour of each track. Though I’m sure a more full-blooded Cory fan than me simply enjoyed hearing those licks endlessly repeated.

We hit peak Cory during ‘Friends At Sea’ when saxophonist Zander Bones plays an alto and tenor at once and Wong joins him on soprano. Putting it down afterwards, his parting line is, “I only know four notes and I know I was out of tune, but it’s fine – we can fix it in post.”

Things are revved up for the final number, a fantastic show-closer with a ‘will I, won’t I’ finish and as the final chords ring out, Wong looks utterly chuffed with himself and his band.

This is a musician who is truly grateful for where he’s got to, and he says as much at the mic. Less saccharine than Taylor Swift’s crowd flattery tactics, it’s a genuine thanksgiving that makes us all a little more glad that Cory Wong got to do what he was born for.