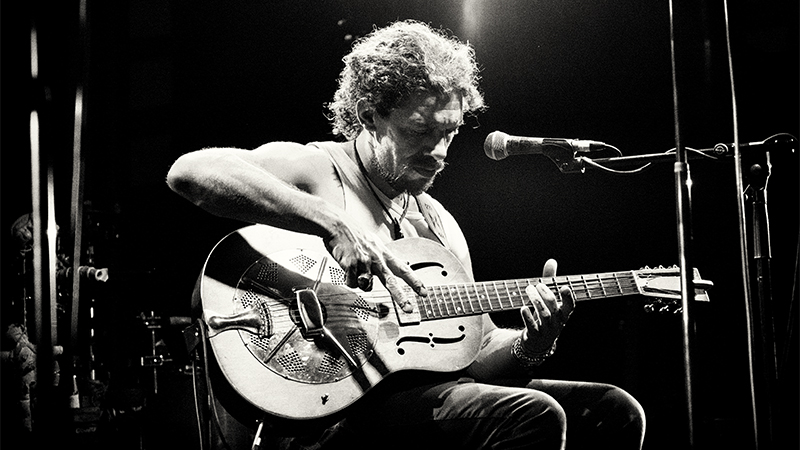 John Fairhurst is a delightfully inventive guitar player and a creative song writer. He can riff like Iommi and solo like, well, insert guitar hero of your choice here; whilst his songs are beautifully crafted and he’s a dynamite live player. He’s toured solo, played in a variety of groups and performed everywhere from Glastonbury to your local pub. His music is steeped with all the classic rock n blues influences but he’s an inquisitive musician who isn’t afraid to fuck with the format and drag influences in from any genre that catches his ear or from musical traditions outside the mainstream and from all over the world. He’s playing the Golden Lion on Friday 25th and attendance is highly recommended. Especially as the support will come from John E Vistic’s new project The Nurses. Two Johns for the price of one, and a night of guitar mayhem fo’ sure.

So how happy are you to be referred to as “the Wigan Jimi Hendrix”?

Haha! Well, being compared to one of my great guitar idols is fine with me! Jimi was, is and probably always will be next level compared to almost anyone else. A wild innovator and sound-smith. So yeah, it’s a huge honour! Having said that, no one ever wants to get trapped being like someone else so I’m just doing my own thing, adding new elements to my sound and style on the guitar. I don’t really play like Jimi anyway…who could, but he taught me a lot!! Undeniably and through geographical circumstance, I am from Wigan.

We’ve had decade upon decade of innovative guitar players across all genres, what’s left to say with six strings and a piece of wood?

I think there is always plenty to say with 6 strings and a piece of wood otherwise people wouldn’t do it anymore, say whatever you want. We have endless musical styles at our fingertips and mixing all of those together is more possible now than ever. Wild experimentation with mixing of genres and I am seeing that more and more. Psychedelic rock blues metal techno hip folk hop afro Caribbean ska punk gnaoua noise electronic mash up…

Where are you happiest, on stage or in the studio?

I enjoy both equally but in different ways I guess, I’m happiest if it’s going well! I’m happy if I’m playing. It’s the getting lost in music, in the creativity, that’s the really good bit, that’s when you come out with things you never normally would, because you have left the conscious realm and you are allowing everything you have learned and all your imagination to run free and wild. That experience, especially when you are right in the middle of that whilst playing with other musicians, whether it’s to an audience or tape, when you are all in that place together, its electrifying for you the player and for the audience. That’s what you live for!

You’ve played Glastonbury, you’ve played pubs – what do you prefer, the sweaty intimacy of a small venue or the wide expanse of a sunny festival?

A wise man once said to me vibe is king, vibe is everything. This week we played in a relatively small venue and in a relatively big venue. Both were fantastic because the vibe was awesome! I guess it’s how much the performer and how much the crowd can encourage each other to forget themselves and get fully involved in their interaction. To get lost in the experience.

You play solo gigs as well as in a variety of band situations, is variety the spice of life or do you hanker to settle down in to a fixed set-up?

I do believe variety is the spice of life and I really enjoy playing solo and with a band. It’s less a case of a variety of band situations though these days. I’m really concentrating on working with Nina Harries on electric upright double bass and Nuno Brito on drums and percussion at the moment. We found something really interesting and challenging together as three full time musicians of quite different backgrounds and styles. It’s a lovely, interesting and diverse conversation that is rapidly evolving and growing. We decided start something after having been impressed with each other’s playing and through recommendations. Musically it feels like we met on a level. We like to improvise a lot, exploring different places, textures and dynamics. There is a real sense of freedom and trust in each other when we play. It’s going really well!! I’ve had a great run of solo shows this year, and a fantastic tour with My Baby in the Netherlands. Actually Cato just asked me to support them at their sold out show The Paradiso in Amsterdam on 7th December. Top venue with one of my favourite bands! Bit chuffed about that!

If we could set up a dream jam for you, which musician(s) would you like to play with and why?

Here’s a list of a few off the top of my head at the moment: Jim Morrison, Jimi Hendrix, Ravi Shankar, Janice Joplin, Miles Davis, David Bowie, John Bonham, Allah Rahka, Kurt Cobain, Tony Iommi, Elmore James, Son House, Grace Slick, Big Mama Thornton, Frank Zappa. It would be a really interesting party and they are all incredible. The list is endless. Iggy pop too. All these people and many more mix together in my mind I would like to hear what it actually sounded like with the real people.

And by a similar token, if we could land you in the recording studio for the making of a record, which session would you pick and why?

Robert Johnson. Can I have both sessions? Just so i could sit and listen and watch him play.

Q Magazine recently (rather pompously) referred to Johnny Marr as “the thinking man’s guitar hero”, which suggests there must be a load of guitar players who are only appreciated by non-thinking men – what’s your take (and is it paranoid to think most of those players feature in Classic Rock or Kerrang!)

Honestly, I don’t really care. I have no interest in musical hierarchy or snobbery.

In fact there’s a bit of snobbery about metal shredders and gurning heavy rock players, what’s your opinion – have these long haired reprobates added anything to the development of guitar playing over the years?

I was well into metal when I was a teenager so yeah, for sure. They kind of really went far with the development of heavy and incredible technicality! It’s a very precise and constructed approach to playing, much like classical music. Admirable! Great players doing interesting stuff. It doesn’t matter what instrument or genre. Same goes. Snobbery is bullshit.

And at the opposite end of the spectrum, what do you reckon to the “This is a chord, this is another, and this is a third. Now form a band.” mantra from the birth of punk rock forty years ago?

Does music have passion, power and emotion and connect with people? If so, generally, it’s good music. Not good as in better or worse. That is a ridiculous concept. Good in that it does its job or having a connection with people on a variety of levels. It doesn’t matter through what musical route that is achieved. There is a lot to be said for a wild approach, commercially successful doesn’t mean it’s good.

You’ve a well-earned reputation for your live shows, but your recordings are pretty damn fine, got any studio work ahead?

Nuno, Nina and I are preparing to record an album. It will be as live as possible, to capture the essence of our ongoing conversation. We might record some of it with a live audience. It’s going to be interesting and I spoke to Alex Beitzke with whom I’ve worked on the last two releases but we still have some preparation to do. I’m also working on a solo album. Oh and there are a variety of collaborations I’ve been working on for a while… got a few releases in the pipeline as well as some unreleased material and quite a bit of live stuff. I’ve just not had the time for a while as I’ve been on the road so much. I’m looking forward to a winter break. Can’t wait to play The Golden Lion though and It will be great to be back in Bristol as always!