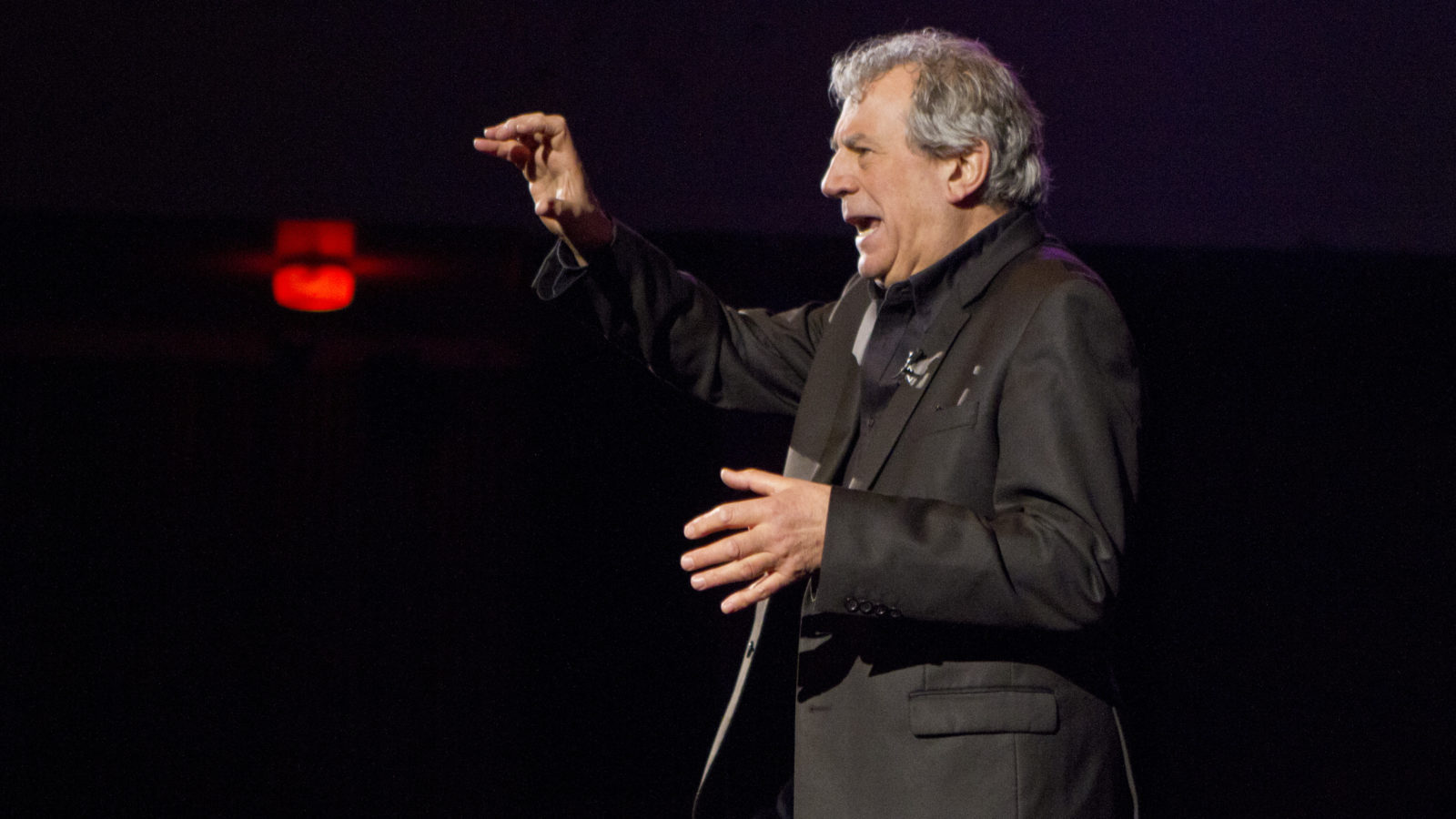 So farewell then Terry Jones, the Monty Python comedy genius who directed the peerless Life of Brian. Terry came to Bristol three times in recent years. In 2015, he was a guest of the Encounters festival to talk about Boom Bust Boom – probably the only economics documentary ever to incorporate animation, puppetry and song as it explores ways of getting out of the endless damaging cycle of boom and bust. Five years earlier, he came to the Arnolfini to introduce a screening of Monty Python and the Holy Grail as a fundraiser for the Slapstick Festival. He enjoyed this so much that he returned to Slapstick in 2012 to introduce and discuss Life of Brian with Sanjeev Bhaskar. He even turned up a day early to catch all of the festival’s Buster Keaton programmes. Sadly, Terry is the second Slapstick supporter to die in the run-up to this year’s festival, following the unexpected demise of semi-detached Python Neil Innes just after Christmas. By way of a tribute, here’s an interview I did with him for Venue magazine prior to that Arnolfini gig a decade ago.:

When ex-Python Terry Jones arrives in Bristol this weekend for a Q&A about Monty Python and the Holy Grail, don’t expect him to stick around for the screening itself. He made that mistake in Boston a couple of weeks ago, having avoided watching the film for years. “I found it very hard to watch,” he groans. “It all came back to me. I just remembered all the problems and mistakes.” 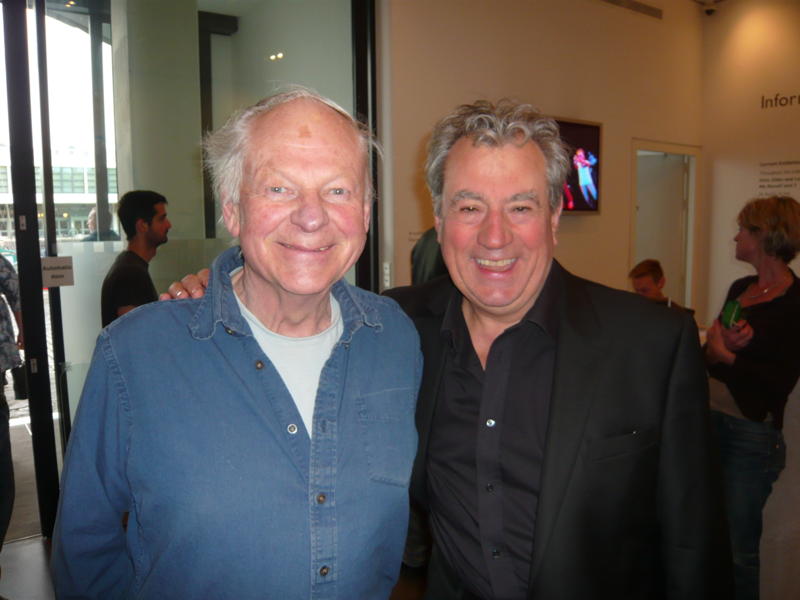 Terry Jones at the Slapstick Festival with the late Richard Williams, Bristol-based animator of Who Framed Roger Rabbit?

That’s right: legend has it that the fifth (according to Total Film) or sixth (according to a C4 poll) funniest film of all time was an absolute nightmare to make. Its minuscule budget underwritten by Pink Floyd and Led Zeppelin as a tax loss (which rebounded on them when the film actually made money), Holy Grail had a brief shooting schedule plagued by inclement weather and inter-Python bickering. But was it really as much of an ordeal to make as has been claimed? “Yes, it was,” insists Jones, who co-directed with Terry Gilliam. “It was terrible. We had five weeks to shoot it in. And the first shot was the Bridge of Death sequence. Six of us were standing on this very narrow ledge. Graham [Chapman] was trembling all over and had to be moved a bit further away from the edge – which was a bit surprising because he was meant to be the mountaineer. Of course, what we didn’t know was that he hadn’t been able to get his gin and tonics in that morning. He was shaking for that reason. Anyway, we then started the first shot of the first sequence and suddenly the camera sheared its gears. Halfway through the take, the cameraman said, ‘Wait a minute!’ He opened the camera and all the cogs fell out. So it was pretty grim and very hard work. We just had to slog through everything and shoot it pretty fast. There was no time for retakes or anything like that.”

Then, of course, they lost permission to use their castles. “Well, that was the first problem. About two weeks before we started shooting, we got this note from the Department of the Environment in Scotland saying that we’d be doing things that were ‘inconsistent with the dignity of the fabric of the building’. Buildings that had been built for torturing people and repressing peasants couldn’t stand a bit of comedy. Heh heh. Terry and I had chosen all these castles, so we had to go up to Scotland again two weeks before we were filming to find somewhere to shoot. It was probably a good thing in the end. We shot at Doune and had to make do with it as the only castle. Every other castle was just a cardboard cut-out. That saved us, because if we’d had to travel between all these different castles that we’d chosen, we wouldn’t have been able to do it.” 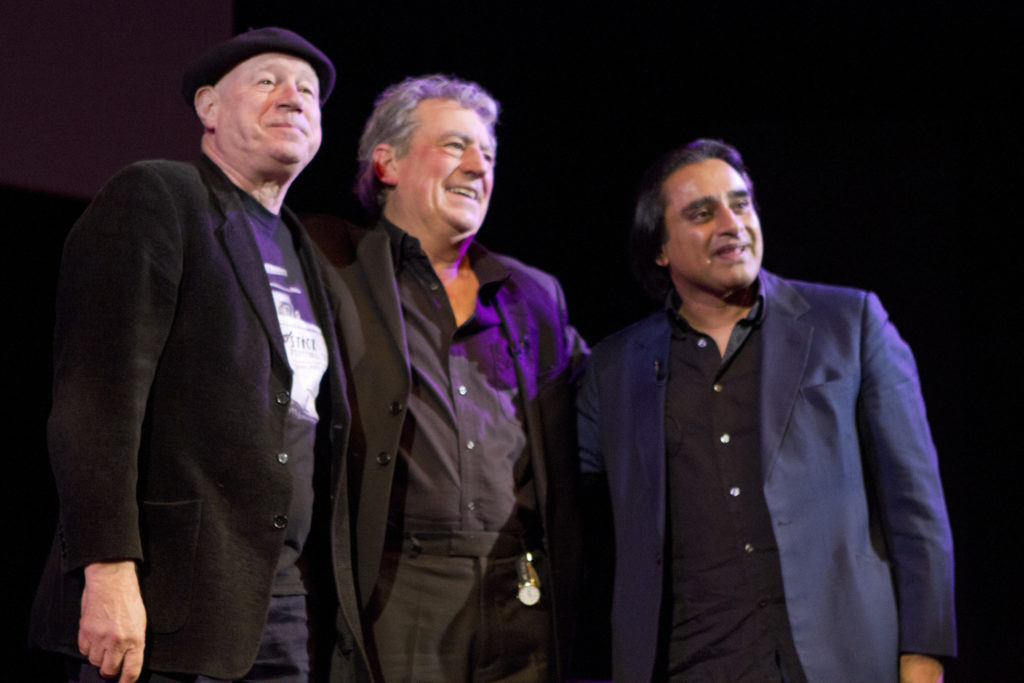 One of the best things about Holy Grail, which often tends to get overlooked, is that the film’s peasants are authentically filthy and scabby, in stark contrast to glossy Hollywood historical epics. “Yeah, Terry and I both agreed on how we wanted the thing to look. As Terry said, we thought we were the same person at that time. But we wanted it to be a contrast to the Hollywood vision of the Middle Ages. So everyone’s got dirty and missing teeth. On the other hand, we probably went over the top. When they brought the Mary Rose to the surface, they found that all the sailors had perfect dentition. The reason, of course, was because it was before the opening up of the West Indies sugar trade. People weren’t eating sugar, so they didn’t have problems with their teeth.”

So you’ve been unfairly maligning the mediaeval peasantry all these years? “I think so, yes,” he laughs. “I go around and give a lot of talks on myths about the Middle Ages. Perhaps I should include that in it…”

In this country, Holy Grail sits in the shadow of the peerless Monty Python’s Life of Brian, which becomes more relevant with each passing year. In the US, however, the reverse is the case. “Maybe it’s the terrible sensitivity about religion in the States,” muses Jones. “There’s still a feeling that it maybe isn’t quite right to make fun of the church.”

The Bristol event is part of Bristol Silents’ 10th anniversary celebrations, and also a fund-raiser for the annual Slapstick festival. Jones isn’t quite sure about the word ‘slapstick’, which he says he finds rather pejorative, but he’s always been a big fan of Buster Keaton and Jacques Tati. “I don’t know whether you’d call Buster Keaton slapstick, really. But I’ve always loved physical comedy. Comedy without words I think is wonderful. I don’t know whether Keaton is an influence, but he certainly had a big effect on me.”

He was still at school when he first encountered the comedy of old stone-face. “I saw The General with an orchestral score and it didn’t really work for me. Then the National Film Theatre had a season of Keaton films when I was in the sixth form. I went to every one of those. The first one that turned me on to Keaton was Seven Chances. [Buster stands to inherit a fortune if he marries by 7pm. After placing a newspaper ad, he’s inundated by prospective brides.] I just couldn’t believe it: 500 women turning up at the church and then pursuing him,” he chuckles at the memory. “Then you notice that they’re all in improvised bridal costumes. They’ve got tea-towels round their heads and things like that. I think it’s the surreal aspect that appeals to me, when the comedy strays into surreal images.” 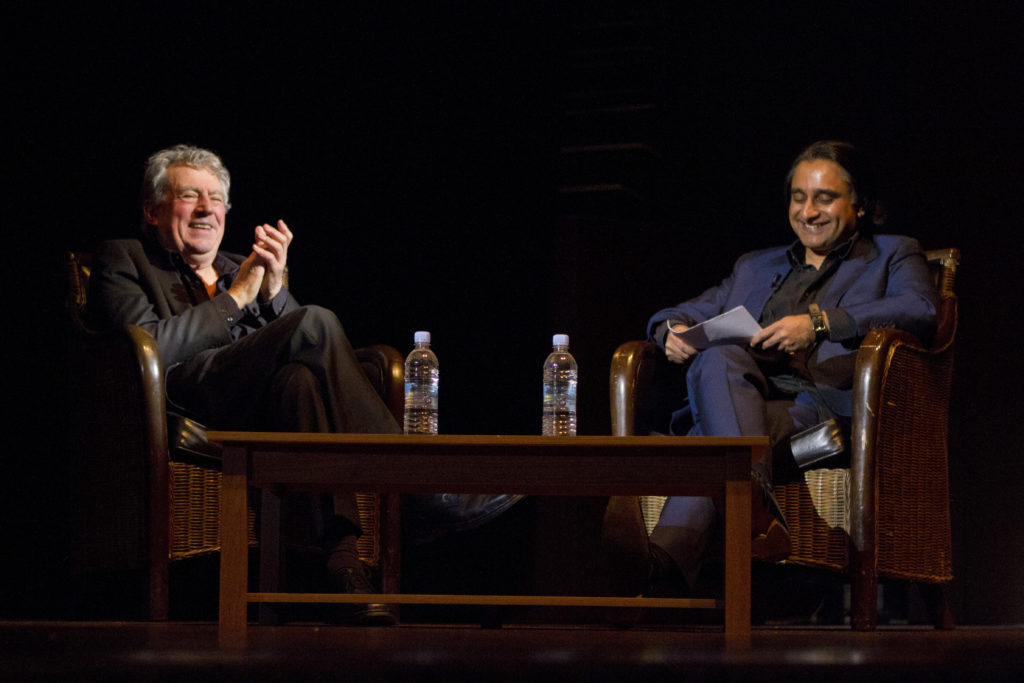 That surrealism has always been part of his own comedy, going right back to Do Not Adjust Your Set in 1967, which, astonishingly, was broadcast on ITV children’s television, potentially warping the minds of a generation. This featured future Pythons Jones, Michael Palin and Eric Idle alongside a very young David Jason and the Bonzo Dog Doo-Dah Band (Was Viv Stanshall as bonkers as his reputation suggests? “I think he was, yes. He was very eccentric. A bit like Graham Chapman in a way.”) This ran for two series and most of the episodes were wiped, but dodgy copies of a few remain. “I was surprised that even those survived,” says Jones. Now released on DVD, they’re a must-see for any Pythonologist.

As for Python itself, the films and TV series seem to be recycled endlessly, often making the cynical repackaging part of the joke. “Yes, fortunately,” Jones enthuses, before I can invite him to disapprove. “Otherwise we wouldn’t make any money.”

This isn’t simply because his son Bill was the director of the latest epic cash-in, the exhaustive and really rather good six-part US documentary series Monty Python: Almost the Truth – The Lawyer’s Cut. “I do approve, absolutely,” he says. “It keeps me able to do academic stuff and things that don’t pay.” 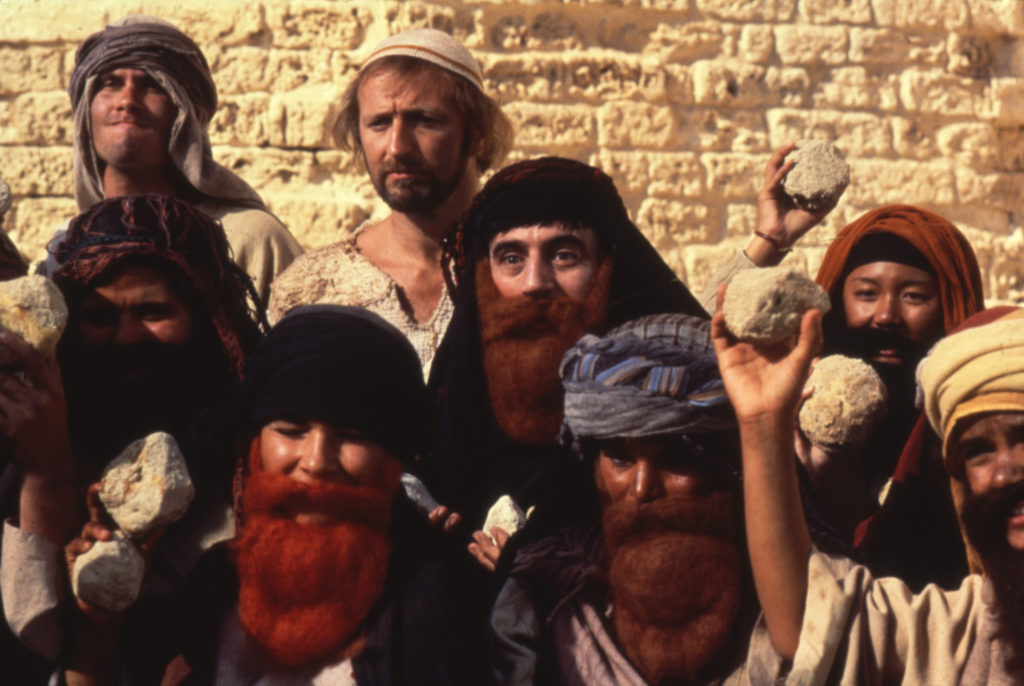 Spot the bearded lady: Jones and fellow Pythons in Life of Brian

He seems a bit hazy on Eric Idle’s stage adaptations until I remind him that he was in the most recent one, Not the Messiah. “Oh yeah, I did do that. It was absolutely terrifying. Eric had said, ‘Oh just come along and read something out.’ Then it turned out that he wanted me to sing. You suddenly find yourself at three o’clock on the afternoon of the show having to rehearse this song with a 250 piece orchestra and a 140 piece choir. I just about got through it, but getting into the second part of the song I suddenly realised I was going twice as fast as the choir…”

Sixty-eight year-old Jones’s vast, Python-subsidised hinterland also explains why he hasn’t directed a feature film since The Wind in the Willows back in 1996 [He subsequently returned to cinema with Absolutely Anything in 2015].  “I’m actually planning one at the moment, but basically it’s because I haven’t written anything. I really only like directing things I’ve written and I got sidetracked into doing these TV documentaries – Mediaeval Lives, Barbarians, Ancient Inventions and things like that. The trouble is that people keep coming up with these really interesting ideas and I say. ‘Ooh, I’d love to know about that!’ Making a documentary series is a great way of learning things – you suddenly get plunged into them. I have no knowledge of Classical times at all. Barbarians was really about Rome. So that’s really why I haven’t got round to directing films.”

His irreverent approach to TV history certainly makes a refreshing change from David Starkey striding around National Truth properties in a double-breasted suit. “I wanted to make history alive and as it really happened,” he explains. “A lot of the way historians talk about history, it’s like, ‘This is the fact’. But actually, it was real living people. I can remember making a joke in a history essay and the master writing, ‘See me about this’. So it’s like you’re not supposed to have jokes in history. People laughed a thousand years ago, two thousand years ago. They’ve always been the same.”

He also takes the opportunity to dress up a lot, frequently in female garb, which has been something of a feature of his career. Carol Cleveland was the only woman who had any significant roles in Python, which has attracted the ire of certain stern feminists. “Carol was glamorous,” says Jones. “She didn’t do the old ratbags. Occasionally we tried to bring in another female actor. We did that for the Mr and Mrs Equator sketch, but it just didn’t work somehow. It wasn’t grotesque enough. So we re-did the sketch the next week with me doing the role.”

But there’s one character above all others for which he’s most fondly remembered. Why do people love Mr. Creosote so much? “Ha ha ha! Well, I suppose it’s the Mr. Creosote in all of us. The idea that you could eat all that much. I think we’ve all felt like we could explode at some point.”

It’s also one of the most fabulously disgusting images in British cinema. “It is, yes,” he acknowledges, sounding pleased with himself. “I think that’s quite a good achievement.”

The 2020 Slapstick festival runs until January 26. Go here for the full programme.

All Slapstick photographs supplied by the Slapstick Festival.