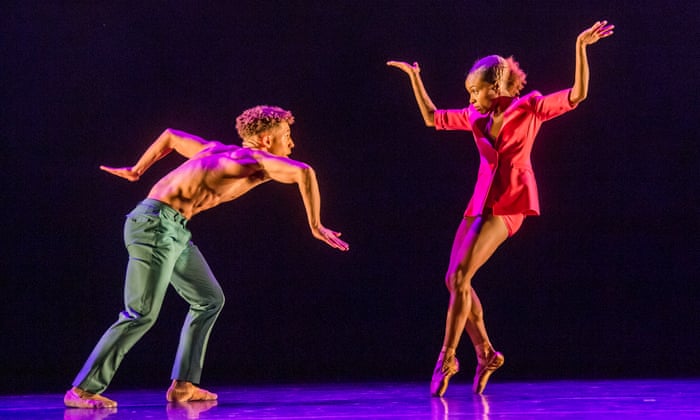 Ballet Black is a professional ballet company for international dancers of black and Asian descent. They aim to bring ballet to a more culturally diverse audience by celebrating black and Asian dancers in ballet.

I originally bought a ticket for this show to spend time with a friend, not expecting to write a review. But part of the way through I knew I had to write about the experience. These dancers gave 110%. It was joy manifest. Followed closely by visceral sadness. As a whole, the performance was heart-stopping.

The triple bill began with Pendulum, a controlled duet, serious and professional, two muscular bodies dancing to a soundtrack that was less about tempo and more about emotion. A male and female dancer showing us what the body is capable of.

The second performance, Click!, was a sidestep into kooky, colourful fun. Five dancers in DayGlo suits moved from disco to ballet, from mellow to techno and back again in the blink of an eye. It was brilliant, and funny! Ballet and comedy don’t often feature in the same sentence, but here it did. The nifty interplay between dancers with a quick wiggle or jive literally made us giggle. It was sweet, brilliant and unexpected, sitting somewhere between contemporary, ballet and acro circus.

I was with eight fellow dancers, and in the intermission we wondered how they could possibly follow Act 1… what came next blew us away.

Act 2 started with the auditorium lights still up. Many whispers around me told me that I was not the only one that wondered if this was a mistake on the part of the Old Vic team. Was this on purpose? Either way, it was strange and unexpected. The dancers on stage, all dressed as miners with headlamps and wellies, emptying bags of coal, soon revealed that it was in fact a trick, a prop, a tool in their story, as we gradually became lit by them instead.

Ignoma tells the story of the 1946 South African miners’ strike – the pain and suffering, of course, but also a willingness and desire to carry on. Some 60,000 miners took courageous strike action, and some died for the cause. The slow starting dance employed African dance, singing, gumboot dance, and ballet, swirling together to make something truly stupendous. The dancers portrayed amazing physical movement and emotion, sometimes crying actual tears, along with many audience members.

The choreography was long and involved, and I can’t even imagine the physicality it takes to perform a piece like that. With every minute that passed, it felt like another layer of an onion was peeled off, revealing very raw emotions underneath.  There was absolute beauty in their unity.

During the inevitable standing ovation, it occurred to me that the majority of the audience would have never seen that many brown or bronze pointe shoes on stage at once. They’re brand new to the market (thanks in large part to Ballet Black), which in itself speaks volumes. Some day, I hope that companies who have to champion BAME dancers become redundant, but until that day, I hope Ballet Black continue to challenge us and push boundaries. I can’t recommend them highly enough.