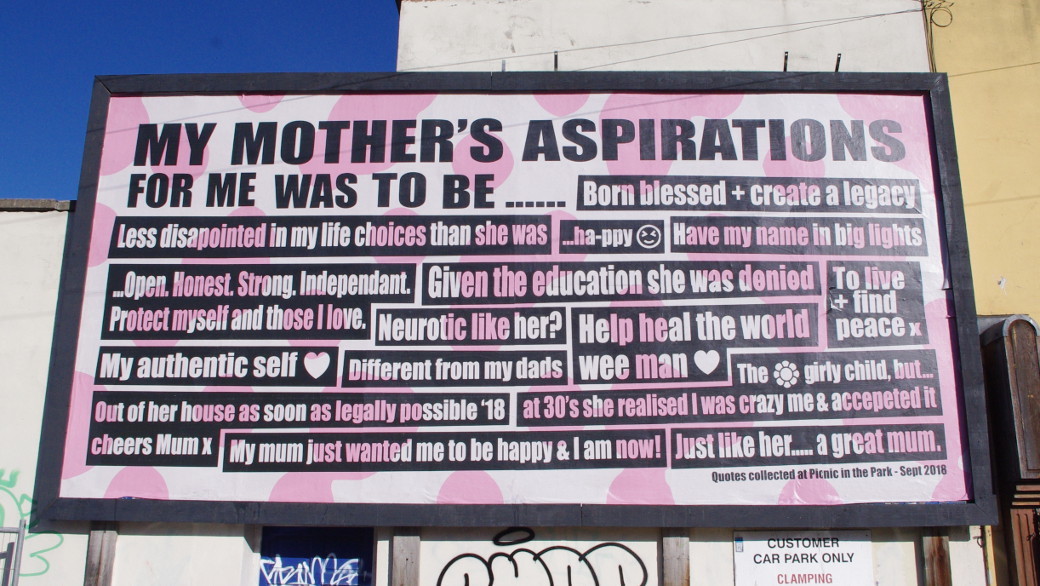 An Iranian-born artist who led a workshop in St Werburgh’s on the theme of  ‘my mother’s aspirations for me’ has taken the many responses received and transformed them into an artwork on a former advertising billboard.

Aida Wilde’s piece is the latest to be created as part of the Burg Arts project, a community arts billboard on the corner of Mina Road and York Street.

“I love making art with other people and various communities as it’s empowering for all involved and wanted the residents in St Werburgh’s to be proud when they saw the work,” said Wilde.

“I also believe that if you’re replacing imposed advertising with commissioned public art, there is a sense that it can’t be totally about the artist. Other considerations must take place.” 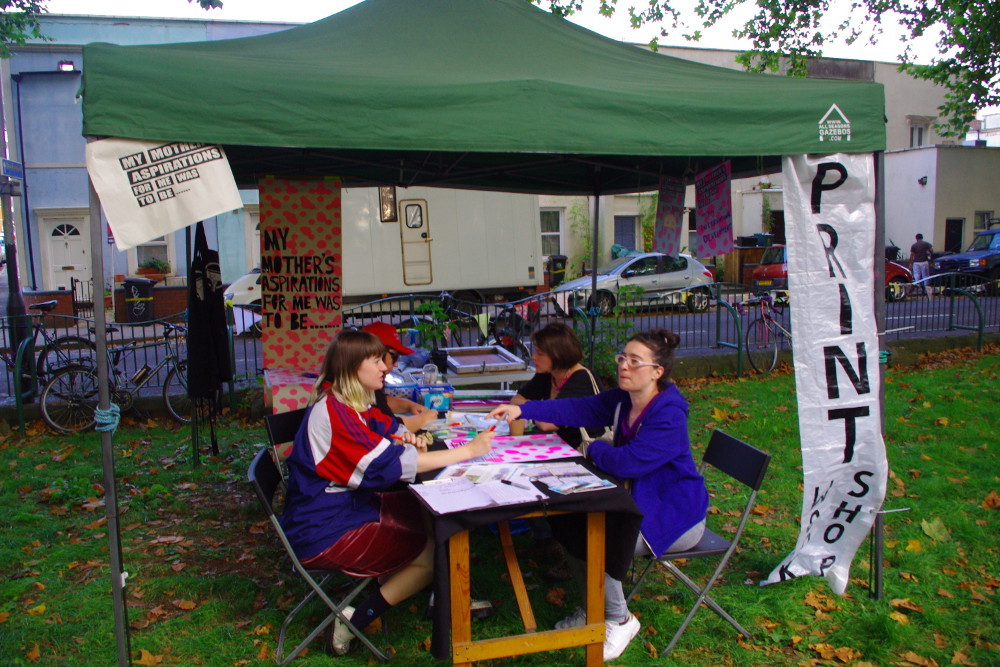 Why did you want to ask people the question, My mother’s aspirations for me were to be…..?

Aida Wilde: “I began ‘My Mother’s Aspirations” series of works about a year ago in a HOME/Interior exhibition in London, and it was initially a statement made by me of my own mother’s aspirations for me and again it was hung up for the duration of the show for visitors to add to.

“What was initially made as a cathartic way for me to express my own issues and thoughts, this in turn prompted other people to open up & really examine their own relationship with their own mothers. What I found most interesting was after the first initial almost frivolous comments made after reading the text, that when it actually came down for people to write something, they began to think much deeper about the question with some hesitations. Some approached with love and laughs, and some with fear/guilt. It was really interesting to watch how people engaged with something that appeared to be so simple and for the additions to be completely anonymous, gave people the freedom to be truly honest. I hope.”

“This is my fourth ‘My Mothers’ wallpaper in the series and watching how people interacted with it at Picnic In The Park workshop, was really moving with private moments (Hence I didn’t feel like I could take any photos)
Everyone that wrote on it was really excited for the potential of being included within the artwork.”

Your work often focuses on the role of women’s empowerment. What has been your experiences or motivations behind that theme?

“Just like how I found my own empowerment through the medium of print, I wanted to share this with others, with Print Is Power and Sisters In Print projects. I’d like to think that this is as a genderless process but yes, I do make some work about my own experiences about being a women, especially working in a field (print) that is so male dominated and also the genre of street art that I am involved in that includes subverts and larger scale paste-up installs and billboards.

“My motivations include, being made to feel unequal/undermined against my male counterparts despite my ability and years of experience. Sometimes the lack of similar opportunities & treatments presented, set me off. The other major factor is that my family and I were political refuges from Iran and we came to the UK when I was around 10 years old. My mother wanted to give us a better life and opportunities, that included freedom, a good education, and obviously to live in a more equal society. Fortunately, I wasn’t expected to get married at a young age and pop out dozens of children. My life is so far removed from what it may have been.”

Have your found your work is being received differently in the post-#MeToo era?

“I’m not quite sure. I have been doing what I do for a number of years but I do get the sense that there is less fear in people speaking out and expressing themselves. There is a sense of confidence/empowerment and the thinking that someone will be there listen and believe you.

“It’s ok if you’re a high profile celebrity or a public figure to bring immediate attention to certain issues and causes, but most of us, lead an ‘ordinary’ life regardless of what extraordinary experiences and traumas we have gone through.

“Doing what I do, I’d like to think that it is accessible and resonating with everyday people, and I am able to go out into various communities and create work, share and open certain dialogues. Everyday is a privilege when I get to do what I love the most.”