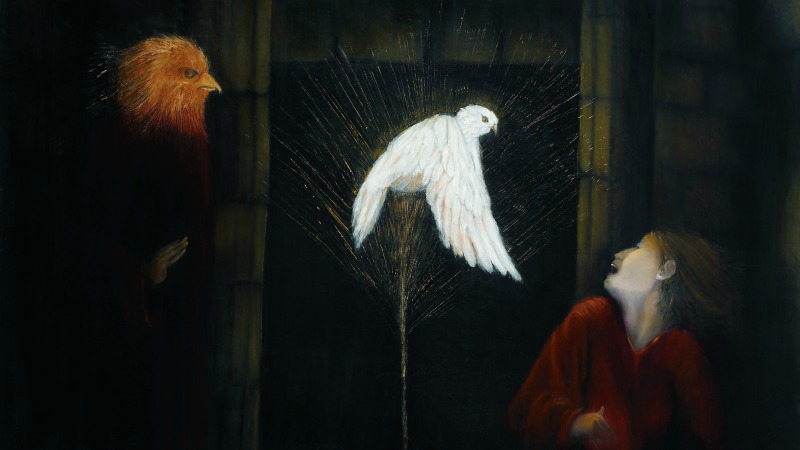 The Royal West of England Academy’s major new exhibition celebrates the life, work and influences of the hugely popular (and longtime Bristol-based) novelist Angela Carter, 25 years after her death. Bringing together art and literature, Strange Worlds: The Vision of Angela Carter explores one of the most distinctive literary voices of the last 100 years.

Delving into the latent meanings of childhood fairytales and the twisted imagery of Gothic mysticism, this exhibition pays homage to the dark and compelling drama of Carter’s visual imagination – brutal, surrealist and savage. Here are co-curators Marie Mulvey-Roberts (Associate Professor in English, University of the West of England) and artist and writer Fiona Robinson RWA to tell us more.

“Childhood fairytales, Gothic mysticism”: tell us more about Carter’s fictional worlds.
MMR: Carter is a very versatile writer and it is hard to pigeonhole her, but she clearly falls under the umbrella of dark fairy tale and Gothic writing. It was a response to how she saw the world: as she once famously said, “We live in Gothic times”, a sentiment as true today as in 1974.
FR: Angela Carter took fairy tales and reversed many of the endings, allowing the female victim to triumph over the male aggressor. Her story The Company of Wolves, later filmed, illustrates this theme. Several artworks in the exhibition were selected for their manipulation of traditional fairy tales.

Which authors particularly influenced Carter?
MMR: Many, as she was such a voracious reader. According to the recent biography The Invention of Angela Carter, between September 1963 and July 1965, when she was living in Bristol, Carter finished at least 200 books, a rate of two and a half books a week! One writer to single out is Jorge Luis Borges, the Argentine Magic Realist. His influence can be seen on Angela’s novel The Infernal Desire Machines of Dr Hoffman, a bizarre futuristic postmodernist dystopia in which reality morphs into the surreal, and is set in a city which is a cross between Bristol and Tokyo (where she went to live after leaving the West Country).

Folk and fairy tales were also key influences for her, weren’t they?
MMR: While studying English at Bristol University, Carter specialized in Medieval Literature, and her final year dissertation focused on a single folk-song and she planned to do an MA on the 14th century chivalric romance Sir Gawain and the Green Knight. Her interest in folk-singing took off in Bristol and appears to have seeded her fascination with folk and fairy tale. She had been enchanted by Andrew Lang’s exquisite fairy books published in the early 20th century, a fascination which she shared with Corinna Sargood, her close friend and illustrator. The original wood-cut of Sargood’s frontispiece for her Virago Book of Fairy Tales is of a lavishly tattooed back and is on display. Tattooing and the idea of people as pictures fascinated Carter.

And which artists and art forms fed into her work?
MMR: There can be no doubt that her work was profoundly influenced by artists and works of art. She wrote to a friend of hers that she was so moved by the work of her favourite artist Rembrandt that she could not bear to see it around the house, as it moved her to tears. But she could bear to have posters on the wall of the pre-Raphaelite artist John Everett Millais’s Ophelia, whose drowned heroine is the obsession of the doomed painter Annabel from her novel Love, set in Bristol. This painting is represented in the exhibition in the form of a hologram of a drowning woman called Ophelia’s Ghost by the Bristol-based multi-media artistic duo Davy and Kristin McGuire. Projected into a glass bottle, it is a living portrait of a dying woman, only the surface is not water but glass, beneath which the Ophelia figure is submerged.
The surrealists were another important influence on Carter, notably the Mexican artist Frieda Kahlo about whom she wrote an essay to accompany a box set of her paintings. Kahlo’s fellow surrealist Leonora Carrington also lived in Mexico, and her short story appears in Carter’s book Wayward Girls and Wicked Women. Some of Carrington’s work which is being exhibited includes a painting paralleling women and birds and an uncanny drawing of a man riding a bicycle which seems to be part of a woman’s body, with bones for spokes.

She wrote five of her major works in Bristol. What were her connections here?
MMR: Angela Carter moved to Bristol from London in 1961 when her first husband Paul Carter got a job as a Chemistry lecturer at Bristol Technical College – later Bristol Polytechnic. Her three novels set in the city, known as the Bristol trilogy, show that even at the start of her career she was already a very talented writer.
The Carters lived in a ground-floor flat at 38, Royal York Crescent. In those days, the area was rather run down and full of junk shops. The owner of one is the hero of her first novel, Shadow Dance, a failed painter called Honeybuzzard. Many of the characters of these early novels are based on people she knew in Bristol. Paul and Angela were also heavily involved in the Bristol folk scene and established a British traditional folk-song club, Ballads and Broadsides, at The Bear in Hotwells.

Where in art and literature can we, in turn, see Carter’s own influence?
MMR: Layla Holzer immediately springs to mind. Carter’s influence on her work is the main focus of Layla’s upcoming solo show at the Coexist Gallery in Hamilton House this February. The RWA is also running two of Layla’s workshops on shadow puppets to accompany the Strange Worlds exhibition. Layla made an eerie film on Carter’s disturbing short story The Erl-King, which Charlotte Crofts and I will be screening at the Fireworks conference on Carter at the Arnolfini on January 10.
The most well-known author whom Carter influenced is undoubtedly Salman Rushdie. I asked him about her when he came to give a talk on his latest book at St George’s Bristol last year, and he spoke movingly about the importance of Carter’s inventive use of fairy tale for his own work, regarding her as a great friend.
FR: Paula Rego, Ana Maria Pacheco (Hades II, pictured top) and Alice Maher are all exhibiting in Strange Worlds. None of them have made work in response to Carter’s writing but there are clear parallels with Carter in their feminist intent and the darkness of their imagery. Many of the works by the contemporary artists in Strange Worlds tap into the darker side of Carter’s narratives and her explorations of gender, violence and sexuality.