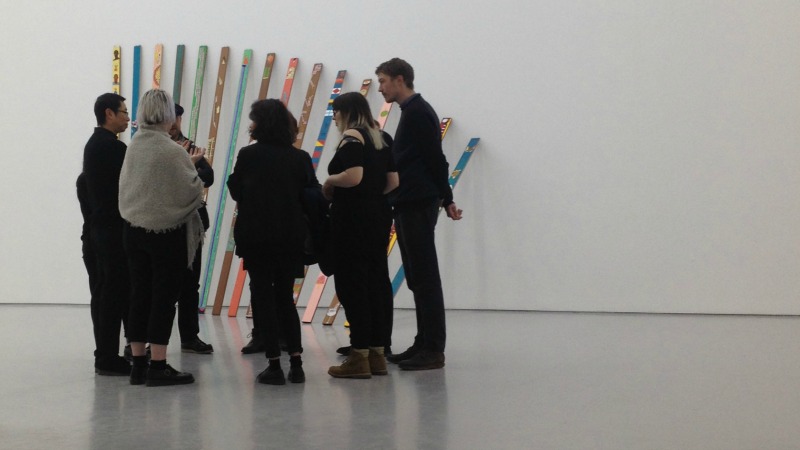 Lubaina Himid was a pioneer of the Black Arts Movement in Britain in the 1980s, which offered a forum for black artists exploring the social and political issues surrounding black history and identity.

A collaboration with Modern Art Oxford and Nottingham Contemporary, Spike Island’s current exhibition of her work focuses on migration, labour and creativity – all long-standing concerns for Himid. Here’s Spike’s director Helen Legg to tell us more.

How did this show came together, Helen?
I first came across Himid’s work in 2013 at Tate Liverpool – the work on show was bold, striking, funny and unlike anything else at the time. What becomes apparent when you look into Himid’s background, or when you speak about her with artists who worked with her in the 1980s is that she was an incredibly influential figure – not only as an artist, but also for her work as a teacher and curator and her role within the Black Arts Movement. When you come across someone who has been so significant, with such a strong body of work and yet whose contribution clearly hasn’t been recognized it’s a no-brainer to offer them a show.

Tell us about Himid’s art and artistic concerns.
Himid trained in theatrical set design and her early works from the 1980s took the form of crude, free-standing cut-outs, like stage flats, which she then painted and covered with words and images cut from newspapers and magazines. Her major work of this period, A Fashionable Marriage, was a satirical play on Hogarth’s painting series of the same name, reworked to pose provocative questions about race in 1980s Britain – particularly in the art world. And, while Himid’s work is often discussed in terms of race, she is equally concerned with feminism. To this end she curated a number of important exhibitions of Black female artists in the 1980s that are beginning to be more widely debated and discussed by art historians.

And there’s a resurgence of interest in her art now?
Yes, by curators of my generation. In some ways she falls into a blind spot – curators of my age are too young to have seen her early exhibitions in the 1980s, and by the time I began looking at contemporary art many artists of her generation had been swept away by the Young British Artists, who dominated public perceptions of British art throughout the 1990s.
For the last ten to 15 years there has been a quietly growing reaction, with artists and curators reconsidering the YBA narrative and asking ‘What else was out there at that time?’ So now, to meet someone who has explored for over 40 years some of the most pressing and urgent issues of our post-Brexit world – migration, national identity, labour – there is a sudden jolt of recognition as to the relevance of her work.

“Migration, labour and creativity are all longstanding concerns of Himid’s”. Can you tell us more?
Himid is interested in how peoples’ lives are shaped by powerful global forces beyond their control. She wants to give recognition and return dignity to people. Naming the Money, the largest work on show at Spike Island, depicts a mass gathering of African slaves in the courts of Europe and features a soundtrack in which these people speak of their birth names and original trades as well as the new European names and jobs given to them.
The work gives voice to people whose identities are poised between two worlds and pays respect to their labour, while taking a critical stance towards their treatment as traded goods. In terms of creativity, a particular strand in Himid’s work has been about emphasizing the creativity of women artists and of the contribution to European culture made by people of the Black diaspora.