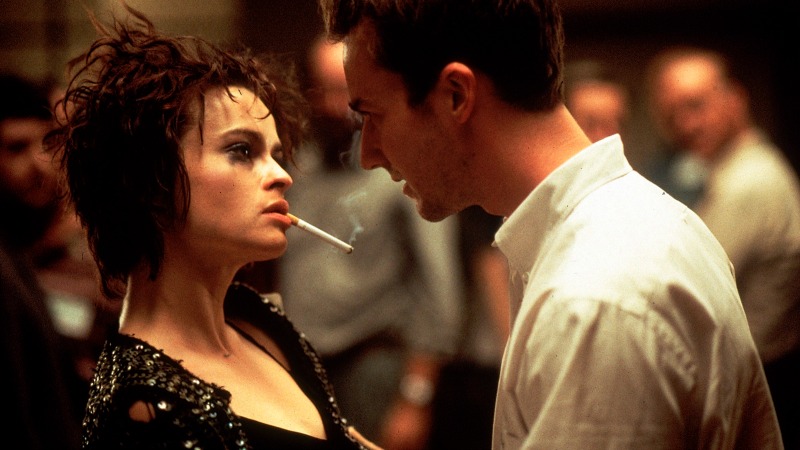 From the typically innovative credits sequence onwards, the first hour of Fight Club is stylishly directed, bitingly black-hearted, achingly funny and brilliantly cut to a pulsating Dust Brothers soundtrack. How on earth can David Fincher possibly sustain this? The answer is, of course, that he can’t. The second act begins with Brad Pitt inviting Ed Norton to wallop him, launching serial fisticuffs as America’s downtrodden chaps find the solution to their, ahem, “crisis of masculinity” in the sport of hitting each other very hard indeed in dingy basements. By the third act, this over-rated cult flick simply becomes very silly indeed as it hawks crackerjack philosophy as profound insight and comes a cropper with metaphor made flesh.

But let’s just savour that first hour, in which the jaded, nameless narrator (Norton) shows us his empty, worthless life as a product recall assessor who examines the tangled wreckage of fatal automobile accidents on behalf of big car corporations. If the cost of settlements as a result of design flaws is less than the cost of recalling the vehicles, the death traps stay on the roads. He lives in a yuppie flat furnished by IKEA (bet they’re grateful for the plug) and suffers from chronic insomnia, which can only be assuaged by wallowing in other people’s misery at self-help therapy groups. In a meeting of testicular cancer survivors where – symbolism alert! – he pretends to be emasculated, he’s thrown together with blubbery former body-builder Robert Paulsen (Meat Loaf), who’s sprouted a pendulous pair of “bitch tits” as a result of his condition. At another group, a terminal cancer patient pleads for one last fuck before she dies (“I’ve got porno! I’ve got lubricant!”). You think this is black? Wait till you see Pitt and Norton stealing waste fat from a liposuction clinic to make into soap (“I love selling these women’s fat asses back to them,” quips Pitt). But Norton’s twisted little world is thrown into turmoil when he meets fellow ‘tourist’ Helena Bonham Carter and they tussle over allocation of support groups (“I want bowel cancer!”), and subsequently encounters the mysterious Tyler Durden (Pitt).

The problem with what happens next is not that it panders to fascism, as some have claimed, but that whatever the film is trying to say comes across as curiously half-baked. Even if you buy the thesis that men are biologically programmed to revolt violently against their home furnishings and employment straightjackets, there’s something risible about the cult-like underground movement that Fight Club postulates. Like Fincher’s earlier The Game, the film grasps desperately for some kind of significance that remains beyond its reach. And with the final twist, it foolishly tries to make an obstinately literary device work on screen.

Fight Club is back on screen to mark its 20th anniversary. How time flies, huh?