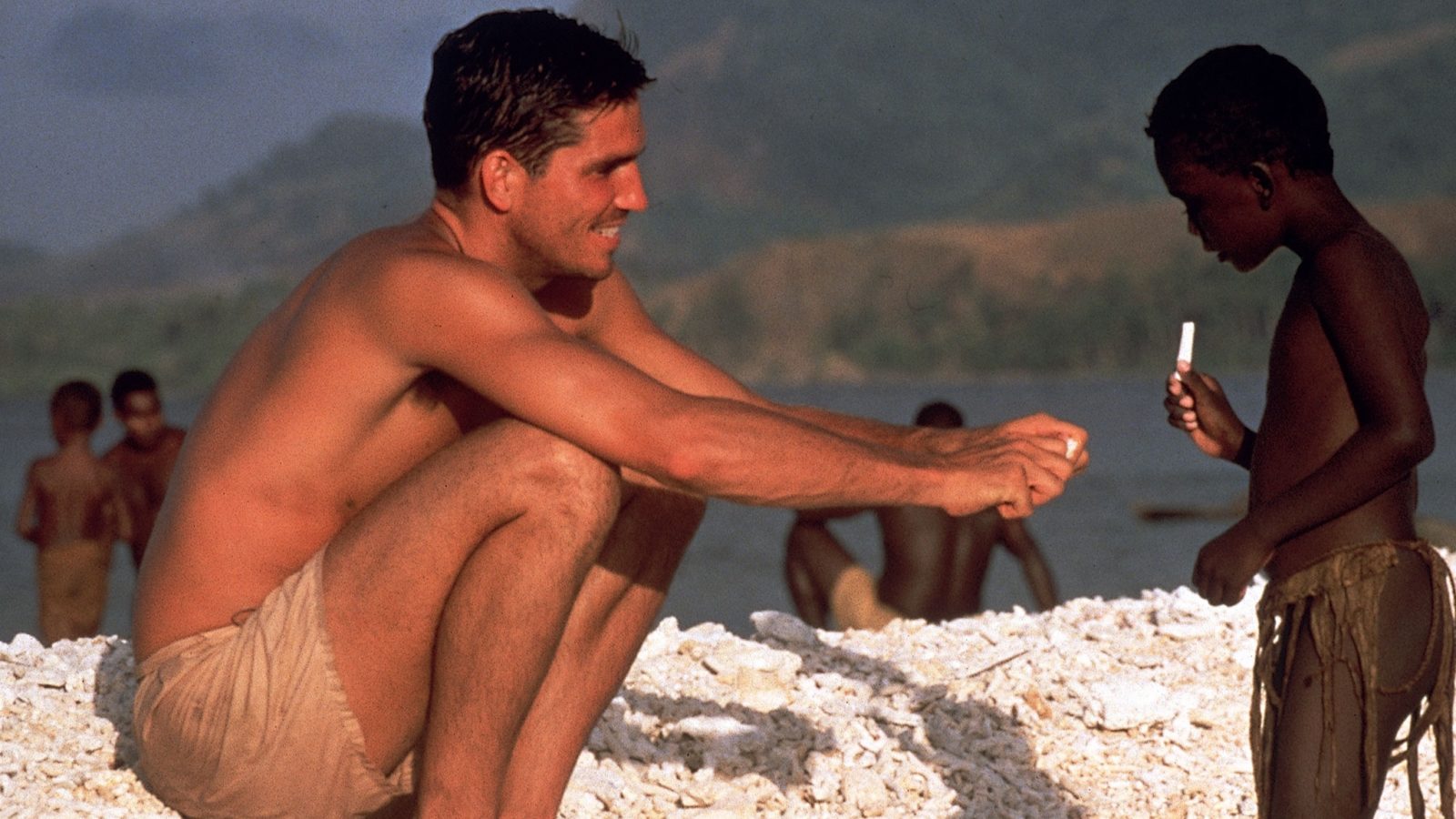 Back in 1998, it had been 20 years since reclusive Terrence Malick’s previous film, Days of Heaven. So he decided to give us two films wrapped around one another, presumably to keep us going for the next couple of decades. The first is a taut, visceral ‘War Is Hell’ flick following a mixed bunch of US grunts as they attempt to capture the idyllic Pacific Guadalcanal Island from the Japanese. Alas, the second is a woolly art movie whose impact is akin to being lectured by a sixth-form philosopher with a redneck accent for the best part of three hours. Frustratingly, the latter continually interrupts the former leaving the audience to ponder the really big issues, like which one’s John Travolta and when’s George Clooney going to show up?

It begins promisingly enough with a pair of AWOL soldiers living happily among Guadalcanal’s Melanesian natives in a pre-lapsarian island paradise until they’re abruptly scooped up by Uncle Sam and packed off to fight over a hill as part of some grand strategic plan. But already that dodgy voiceover has begun, supposedly giving voice to the principals’ unspoken thoughts. “Why does nature contend with itself?” we’re asked over footage of a big toothy crocodile. Dunno. Call Richard Dawkins. “What is lurrve? Where does it curm from?” demands an enlisted existentialist as the device which dominated Malick’s earlier Days of Heaven reaches its bathetic nadir when bullets are whizzing about all over the shop a couple of hours in.

Unlike author James Jones, Malick doesn’t seem particularly interested in these characters as individuals and for the most part they’re pretty much indistinguishable. Sean Penn looks pissed off a lot, as is his wont, and Woody Harrelson gets a great death scene when he accidentally blows his own bottom off with a grenade, but only Elias Koteas and Nick Nolte have roles they can really sink their teeth into: the former as a defiant captain who refuses to lead his men on a suicide mission straight into the enemy guns and the latter as a scene-stealingly gruff colonel who’s never seen action before but “read Homer in the original Greek” at West Point and is determined to make his mark on the battlefield, no matter what the human cost. Disturbingly, the film’s portrayal of the Japanese is a throwback to the pre-PC days of ruthless, jibbering gooks. For most of the film they’re literally faceless as we see them only from behind, mowing down the flower of America’s youth. And whereas Malick shares the grunts’ most inane innermost thoughts, the Japanese aren’t even afforded the dignity of subtitles, so we’re given no comparable insights into their experiences.

But despite dealing largely in cliches (the soldier who dreams daily about his wife only to get the inevitable ‘Dear John’ letter, etc), the mission movie element is superbly executed. Malick builds the tension slowly as the wary troops slog through the undergrowth, eventually coming across a pair of hideously mutilated marines. And in an extraordinary scene when they first see action, the camera suddenly takes off and swoops low over the verdant contested ridge as gunfire rages, cutting down grunts by the dozen. Malick’s much-vaunted anthropological correctness also pays off in a brilliant moment when the twitchy troops encounter an entirely unfazed Melanisian making his way in the opposite direction. This is no sterile battlefield, either: it positively teems with wildlife – including all manner of colourful birds and slithery reptiles – ensuring plenty of stunning images that will stay with you long after the pretentious philosophising is mercifully forgotten.

But if all that turgid philosophising actually floats your boat, you’ll be delighted to learn that the Cube’s screening kicks off a new regular collaboration with the Bristol Philosophy Club. Join their Facebook group for more information.