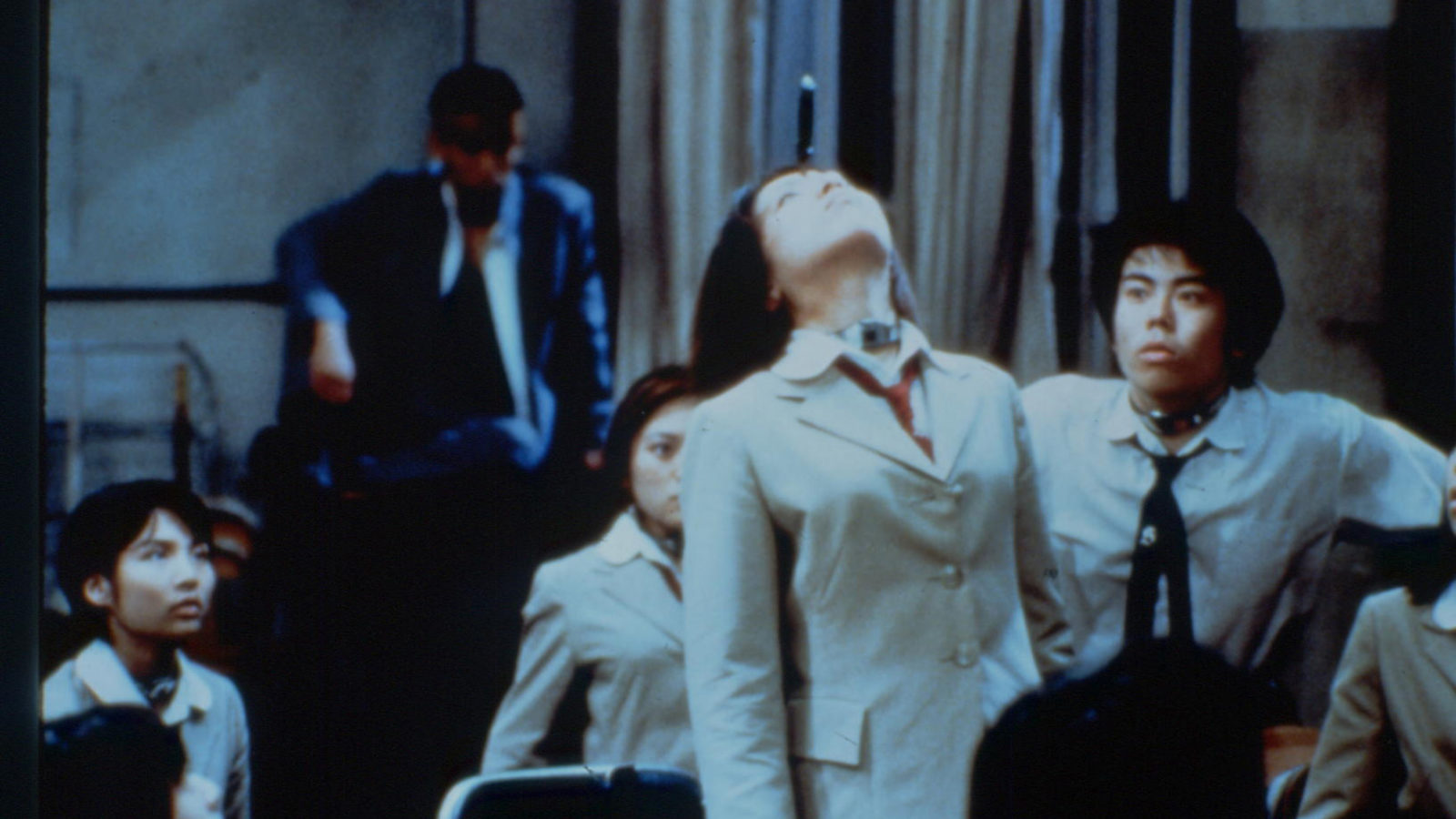 The Japanese film the Americans really ought to remake is, needless to say, the one they’d never be allowed to put on screen without toning it down to such an extent that the point would be lost (though they had a go with the sanitised Hunger Games franchise). Septuagenarian yakuza flick veteran Kinji Fukasaku’s 60th feature not only taps in to the mania for ever more extreme reality TV and middle-aged panics about out-of-control yoof, but also delivers strikingly realistic, unstylised scenes of 14-year-old girls in school uniforms machine-gunning one another to death. What’s more, he makes it all hilariously funny. One suspects the only reason the BBFC granted Battle Royale a certificate is that as a subtitled film playing to arthouse audiences it is unlikely to infect the slack-jawed underclass whose alleged suggestibility so exercises the collective censorship mindset.

It’s sometime in the very near future and society is on the verge of collapse. Juvenile violence has reached such epidemic proportions that the government has decided Something Must Be Done. A class of 42 teenagers are about to find out exactly what the Battle Royale Act actually means. Having been drugged, they awake in a room on a deserted island, surrounded by armed soldiers. Their much-abused teacher (Takeshi Kitano, on fine world-weary form) gets their attention by blowing a boy’s head off and hurling a knife into a girl’s forehead. He then switches on a jaunty primary-coloured video in which a jolly woman explains the rules of the game they’re all about to play. Each player gets a kit bag with food, water and a randomly selected weapon, and is fitted with a non-removable necklace that explodes on electronic command. The game lasts for three days. Its object is to kill everyone else and emerge as sole survivor. If more than one player survives, everybody dies. Oh, and there’s no escape.

This Castaway with ultraviolence and a dash of Lord of the Flies gets underway with a feast of murder and suicide as the sensitive kids who can’t deal with the game’s brutality and cruelty hurl themselves off cliffs, while the fat and unsporty losers are quickly picked off by the psychos in their midst. The survivors then adopt a variety of strategies, from randomly shooting, bludgeoning, hacking and stabbing everything that moves to forming uneasy alliances, knowing that ultimately the only way they can remain alive is by killing their friends. Regular bulletins listing the latest deaths are broadcast over loudspeakers with a soundtrack of upbeat popular classics, in an obvious homage to Kubrick, while an onscreen scorecard keeps us informed of how many are yet to die. Along the way, Fukasaku never lets us lose sight of the fact that these are immature children, prone to all the usual teenage crushes, petty jealousies, vanities and insecurities. There are some odd plot holes, and the Easily Offended will be delighted to find themselves whipped into a frenzy of disapproval. But, refreshingly, nothing is sanitised and no punches are pulled as the corpses pile up in this splendidly vicious satire.