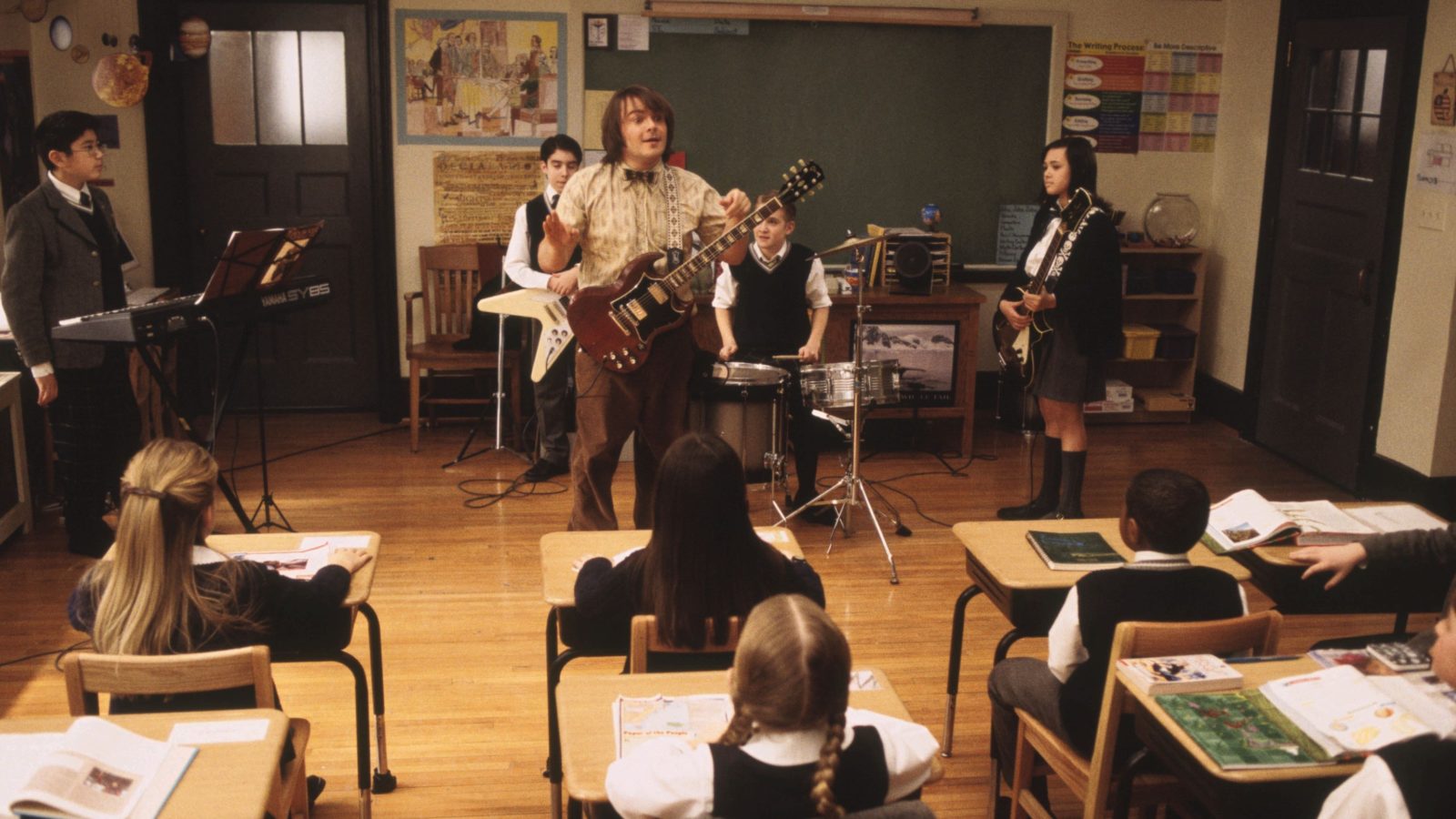 It’s wholly predictable, stuffed with caricatures, and enormous fun from start to finish. Jack Black’s first big starring role, written for him by co-star Mike White and directed by Richard Linklater, succeeds because it respects its characters, never condescends to its audience, and celebrates the transformative power of ROCK without recourse to corrosive irony. Oh, and Mr. Black enters into the film’s spirit with both magnificent eyebrows figuratively ablaze, for this was the role he was born to play.

Thirtysomething Dewey Finn (Black) lives for rock. Unfortunately, it seems rock can get along just fine without him. At his lowest ebb, he finds himself kicked out of his own band for excessive guitar noodling and stage-diving. Even his oldest friend, the fabulously named Ned Schneebly (White), off whom Dewey’s been freeloading all these years, has given up on dreams of stardom and become a schoolteacher. “I serve society by rocking!” objects unemployed Dewey when his pussywhipped pal threatens him with eviction. Desperate for cash, he impersonates Ned and lands a job at an expensive private prep school run by prissy tightass Miss Mullins (Joan Cusack). Needless to say, he hasn’t the faintest idea how to teach and is suitably appalled to find that his 10-year-old charges’ musical taste stretches from P Diddy to Andrew Lloyd Webber. But when he discovers how musically talented they are, Dewey decides to tutor them in Rock Studies and secretly enter his class for a local Battle of the Bands contest. The blackboard is soon covered in ‘Rock Appreciation’ flowcharts, while homework consists of detailed study of Yes, Rush and Pink Floyd CDs.

Black’s unrestrained and – yes! – Belushi-esque performance is a delight, the kids are agreeably non-cute, and White’s witty script gently subverts mainstream conventions. Rather than being depicted as an arrested adolescent who must put away childish things on his belated journey into adulthood, Dewey never loses his belief in rock as the prime motivating force of human existence. It’s those who have chosen to deny this truth, such as Ned and secret Stevie Nicks fan Miss Mullins, whose lives are sad and empty. And having eventually squeezed its star into a school uniform, the film won’t let him go without a rousing AC/DC number. For those about to see School of Rock, we salute you!

It’s back on screen as part of the Encounters festival’s full day of features by some of its most famous alumni.  Richard Linklater competed at the festival in 2004 with his short Live from Shiva’s Dancefloor.