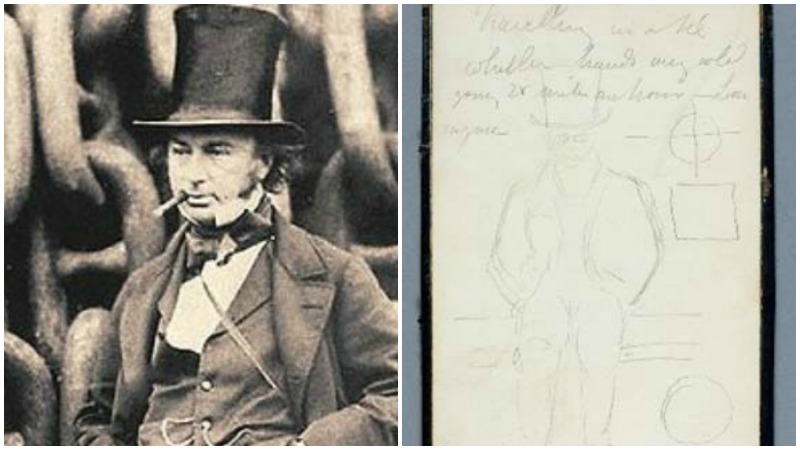 A self-portrait drawn by Isambard Kingdom Brunel has been released for the first time.

Previously unseen diary and notebook entries by the legendary engineer have been unveiled by curators at the Brunel Institute, based at the ss Great Britain.

The notes and drawing were written years before his appointment as chief engineer for the Great Western Railway Company and have been revealed in advance of the 175th anniversary of the running of the first train between London and Bristol, which is being celebrated on 30 June.

One diary entry from 1831 describes a journey he took on the Liverpool & Manchester Railway. Brunel wrote: “The time is not far off when we shall be able to take our coffee and write while going noiselessly and smoothly at 45 miles per hour… let me try.”

Two years later, Brunel was appointed chief engineer for the Great Western Railway, the length of which he personally surveyed in a bid to find the smoothest, flattest route.

Brunel is known to have often attempted to draw a perfect circle while travelling on the nation’s bumpy railway lines. One entry is a pencil drawing that Brunel made; seemingly of himself travelling in a cold carriage as he attempts to draw circles and write smoothly.

Matthew Golton, from GWR, said: “All these items give us a real sense of the young Brunel’s determined – and on occasion playful – personality.

“The diary extract could well be documentary evidence of the moment of inspiration that gave birth to Brunel’s vision of the Great Western Railway, so flat it became known as the Brunel’s Billiard Table.

“The second – likely a self-portrait – bears an uncanny resemblance to one of the famous photographs by the landing chains of the ss Great Eastern almost 30 years later.”

Eleni Papavasileiou, from the ss Great Britain Trust, said: “From Brunel’s extensive diary entries and notebooks, we start to sense his thought processes and understand how he approached the creation of the Great Western Railway.

“These informal musings and doodles might appear trivial, yet they tell us so much about Brunel’s mind and how he was absorbing every facet of the challenge he faced.”