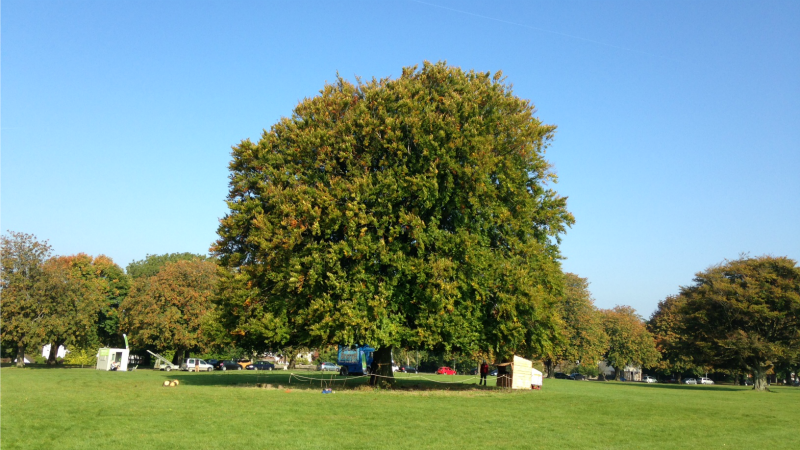 A £37,000 singing tree which was supposed to create music from its falling fruits has reignited a row over Green Capital funding after it failed to produce nuts.

The 100-year-old beech tree on the Downs was hooked up to recording equipment by the Bristol Ensemble who won a share of Bristol 2015’s £1.3 million funding pot.

But the TreeSong project has been called a failure by critics who also pointed out that it won funding at the expense of other projects such as the Severn Project urban farms.

In an opinion article for Bristol24/7, Steve Glover from Severn Project said: “It feels a bit hollow. As a city we close respite care and youth clubs, slash other care funding programmes and then give money to people to make music from the sound of fruit falling from a tree. And they can’t even do that.”

He added: “Many people from Bristol are still completely unaware of what Green Capital is. Generally, fruit falling from a tree symbolises waste. And this is a complete waste. Of public money.”

The row over Green Capital funding has been reignited by TreeSong

TreeSong will remain installed in an adapted form over the weekend – near the junction of Stoke Road and Saville Road – and its sounds will be captured and interpreted by the Bristol Ensemble at St George’s on November 29.

Roger Huckle, artistic director of the Bristol Ensemble, said: “We had chosen this tree because it had so many nuts last year but there just aren’t any this autumn so we’ve had to rethink.

“It just happened to be one of those years. It is quite funny I suppose. So we are now using the whole tree itself. There’s lots of sensors that are put on branches to pick up movements of the wind, or when animals come on to it. The whole tree is moving all the time and we’re picking up all the noises.”

Christian Martin, a former Lib Dem councillor, also attacked the project. He said: “That Severn Project, which has a progressive and lasting impact, was to lose out to a nutless tree says more about the mayor’s vision for Bristol and beggars belief.”

Questions were raised over a number of Green Capital grants when they were awarded last year.

Green Capital controversy boiled over when Green Party assistant mayor Gus Hoyt stepped down after swearing at Glover over requests for extra funding.