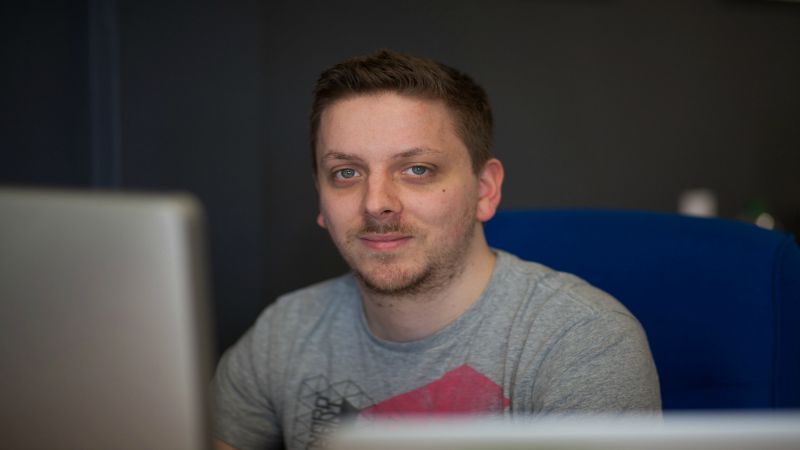 Bristol-based entrepreneur David Smith has set up a project to empower homeless people in the city through digital technology.

Homelessness is on the rise in Bristol and a recent BBC Three documentary, Where Am I Sleeping Tonight, highlighted the issues facing those living rough on the city’s streets.

The Big Issue Foundation offers homeless people the opportunity to earn their own livelihood and take back control of their lives. However, with society becoming increasingly cashless, there is a danger of those most disconnected from technology losing out.

After finding himself cashless and unable to buy a Big Issue, David was inspired to set up Homeless.io, a project aiming to enable Big Issue vendors in Bristol to accept payments via card, contactless and Apple Pay.

David, who runs the web design agency Made Responsively on Park Street and has produced the green walking school bus app Crocodile, is keen to use his technological expertise to help the homeless and less fortunate.

“Homelessness is such a big picture, with so much going on” said David. “I need to start simply, use the skills I’ve already got and find something on my doorstep.”

The idea has rapidly gained attention in just one week, with an approving retweet from Bristol Mayor George Ferguson and a variety of homeless charities contacting David.

Ingenious! RT @MResponsively: Can I get retweet for http://t.co/8tkxckuGiW? — I really want to push the word out around #bristol. Thanks 🙂

Simon Mott and Ian Duff, Big Issue vendors in London and Bath respectively, started using card readers to accept payments – and both sellers have seen substantial increases in sales as a result. Ian has even gone on to set up Duff Cooks, a social enterprise offering free cooking courses to the long term unemployed.

However, despite their success, cashless payment has yet to take off for other Big Issue sellers across the country.

“A lot of sellers don’t have fixed addresses or bank accounts and that is a real issue” reckons David. “I think education is also important. Training would have to be part of the project to get sellers familiar with the technology.”

Simon and Ian both bought their mobile payment terminals from the Swedish company iZettle, who have successfully launched a scheme in Stockholm allowing sellers of Sweden’s equivalent of the Big Issue to accept payment by card on smartphones. The company has contacted David and are looking to assist with the project.

While in the early stages, David has been brainstorming ideas, including a possible app compiling a database of Big Issue sellers that allows for payment by phone. He emphasises the open and collaborative nature of the project and is planning a meet-up for people interested in helping.

“Everyone can do their bit, that’s the most important thing. The project needs people’s ideas and people who are willing to contribute in any way they can.”

The project is in-keeping with the spirit of Bristol, which has been repeatedly lauded as the UK’s largest creative technology centre outside of London and has a range of community driven schemes operating throughout the city.

If you would like to make suggestions or donate time, skills or funds, please get in touch with David at david@maderesponsively.com or twitter.com/MResponsively.